I’ve found it almost incidentally, doing a research for a piece I’m writing for a client. Go to this link and click International Surcharge Info. This fee is per one-way flight, so double it for round-trip travel.

The ANA Mileage Club has the best award redemption scheme in the world, and I’ve written tons of raving posts about it. But this development is a bit troubling. I think this is the record-high fuel surcharge I’ve ever seen on ANA, although, to be honest, I’ve only been “tracking” ANA for a few years. It basically brings the total cash cost of an award roundtrip flight to Japan to ~$500 up from ~$300 right now.

The current fuel surcharge between the U.S. and Japan is $95 one way

Man, what a hike!

It will be interesting to see what the surcharges for connecting flights via Tokyo will look like after February 1. The amounts ANA have added to connecting flights have always defied logic. They’ve never made sense to me and, I’m pretty sure, most others. You can check the following link for the recent history of the ANA YQ changes.

Update August 2021: ANA Fuel Surcharges Have Crept Up on Its Own and Partners Flights 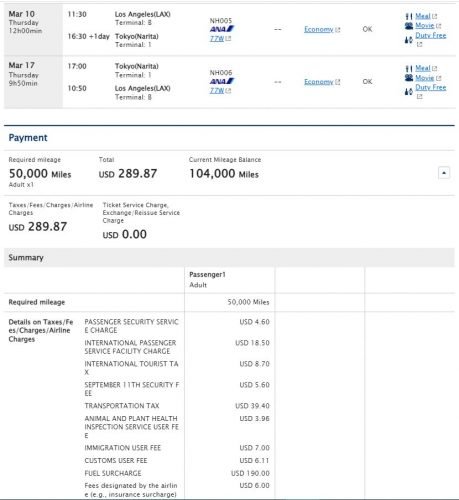 Why is it happening?

It’s unclear to me what is justifying this enormous hike. Fuel surcharges in Japan are regulated by the government and tied to the price of Singapore kerosene trades, so has the price of kerosene really jumped two-fold in the last two months? Maybe someone who knows better how it works can offer their commentaries.

UPDATE: See the great comment of how it works by reader Ipod. Basically, they raise the surcharge every time the fuel goes beyond the $10 mark. So when the fuel cost was below $80, the YQ for Japanese airlines (ANA and JAL) was $95 each way. Now that the fuel price is over $100, they’re adding $190.  Doesn’t make things any easier, but it is what it is, I guess.

This is the JAL table, but again, the fuel surcharges on both airlines are identical.

The Best Western Up To 50% Redemption Promo: More Valuable Than I Thought!

If hotel reward programs had tiers, Best Western wouldn’t be in the first one. Why? Because not only does it have the stubborn stigma of a “budget” chain, but it also doesn’t have any points transfer partners, which, nowadays, is a shame for a major hotel franchise. However, five years ago, it partnered with… END_OF_DOCUMENT_TOKEN_TO_BE_REPLACED

Welcome to my weekly miles, points, credit cards plus other travel news from the blogosphere. Here are some topics: Etihad First Apartments might be coming back for a short while What Your Pilot Won’t Tell You JetBlue will upgrade Mosaic+ members to Mint Nomadic Matt shares his terrible Airbnb experience Two incredible deals are… END_OF_DOCUMENT_TOKEN_TO_BE_REPLACED

My recent Chase Aeroplan credit card review wouldn’t be complete if we didn’t take a look at the value of the program itself. All this talk about value of a credit card is pointless unless we know that the program has any value in it. Well, I took another look and came to the… END_OF_DOCUMENT_TOKEN_TO_BE_REPLACED

Is the New Chase Aeroplan Credit Card Any Good?

A while ago I registered for the new Chase Aeroplan card’s waitlist. It’s not that I couldn’t wait, but they offered an extra 10,000 points, and, mercenary as I am, I couldn’t resist. The card comes with a $95 annual fee (not waived for the first year). And it surely seems different from any… END_OF_DOCUMENT_TOKEN_TO_BE_REPLACED

Breakage is a term used to describe revenue gained by retailers through unredeemed gift cards or other prepaid services that are never claimed. In these cases, the company pockets the money paid for these items, without actually providing the service or item for which the customer initially paid. Investopedia I wrote my last… END_OF_DOCUMENT_TOKEN_TO_BE_REPLACED … END_OF_DOCUMENT_TOKEN_TO_BE_REPLACED

Welcome to my weekly miles, points and new Omicron variant travel restrictions datapoints roundup plus other travel news from the blogosphere. Here are some topics: Miles expiration policies Here is what you have to do to earn a $40,000 fine How to call out hotels playing games with inventory New Kimpton secret password Chase has… END_OF_DOCUMENT_TOKEN_TO_BE_REPLACED

Hilton Free Night Certificate for $8,000 Spend: Is It Worth It for You?

Hilton and American Express have launched an offer for a free night certificate for spending $8,000 on your co-branded credit card. While not everyone gets this offer, many people have. If you carry the Hilton Aspire or Surpass card from AmEx you might’ve been or will be one of them. I rarely cover targeted… END_OF_DOCUMENT_TOKEN_TO_BE_REPLACED