Update August 2021: ANA Fuel Surcharges Have Crept Up on Its Own and Partners Flights 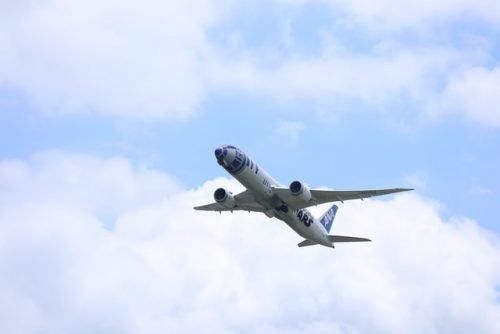 ANA fuel surcharges are back. They’re not too bad if you’re flying to Japan, but if your journey lies beyond Japan’s borders, you’ll have to pay more. And in some cases — much more.

The ANA Mileage Club is very important for international travelers and you need to be aware of this awesome program. Here is why.

The only reasonable transfer partner for ANA (at a 1:1 ratio) is AmEx Membership Rewards. And as you know, AmEx has this silly once per lifetime rule. Granted, lifetime to AmEx may mean that enough time must pass before they “forget” you, which is, reportedly, about seven years. But still, these AmEx bonuses are at a premium these days and that might mean you need to consider reserving all your AmEx points for ANA transfers — if ANA miles work for you.

And how do you know if ANA works for you? Well, if you’re interested in long-haul Business Class travel anywhere in the world you just might. ANA Mileage Club is a fantastic airline for business class awards. Not Economy, not First — Business! If you want an Economy or First Class award, you might want to look at other programs for better values, but I doubt you’ll find any programs that can beat ANA, at least consistently, for Business Class awards.

A brief reminder of the ANA Awesomeness

You can benefit from ANA miles even if you’re not interested in Japan or Asia. ANA partner airlines can take you anywhere in the world, although best values are reserved for ANA’s own flights.

The awards prices on ANA metal depend on the season. Prices for ANA partner airlines are not seasonal and always the highest in the range. For example, traveling to China (Asia 1) costs 95,000 miles in business all year round. 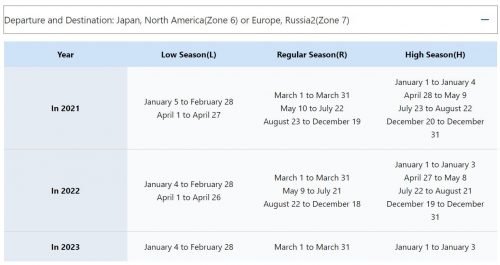 These are Business Class award costs for flights on ANA and the partners between North America and:

If you would like to know more, I’ve written a lot (and I mean a lot about ANA), so you know how I feel about them. 🙂

(The latest is the final 7th part of my long series on ANA, and most of it is still valid today, so if you’d like to learn more than basics about this uncommonly valuable program, I recommend taking some time to read other posts from that write up).

ANA routing rules are good too!

In addition to outstanding redemption values, ANA allows you to have a free stopover and up to two open jaws anywhere alone the route. Trust me, I know the rules allow one stopover and one open jaw, but I’ve done two, so go ahead and try. Sometimes it’ll work, and other times it won’t. Nothing ventured — nothing gained.

However, I have four major pet peeves about the ANA Mileage Club rules and terms

Wait, did I say four pet peeves? Yes, I did, between the fifth is not a pet peeve, it’s a really major annoyance.

But let me first say this.

ANA surcharges for flights to Japan are actually reasonable

ANA dropped fuel surcharges for flights to Japan on June 1 2020 and it stayed this way for one year until May 31, 2021. They reinstalled them on June 1, 2021, and for the booking period ending Sep 31, the surcharges between the U.S. and Japan will remain $102 per round-trip (at which point they will be reassessed. And if you think this is totally reasonable (considering the ANA terrific Business Class redemption levels), you’re right. However, for traveling beyond Japan there is only one word that comes to mind (to my mind at least).

Unlike European airlines, Japanese carriers can’t just decide to slap a defenseless customer with an extra $1,500 for an award ticket and call it a surcharge. In Japan, a fuel surcharge is really a fuel surcharge (then click International Surcharge Info), which is regulated by the government and directly linked to the market fuel prices. From June 1, 2021 to September 30, 2021 the fuel surcharge for tickets originated in North America is $48 each way. But since you can’t book a one-way ANA award flight, that’s $96 for a ticket plus a small $6 insurance surcharge that adds up to a total of $102.

Again, not too bad.

However, when it comes to ANA connecting flights to other destinations in Asia, the math goes out the window (at least, I have no idea why they charge what they charge, since it doesn’t add up). Even in the past, when they dropped the YQ surcharges for flights between the rest of the world and Japan, they kept adding them to some international connecting flights, as the table below will illustrate.

As you will see, the YQ situation has gotten much worse compared to previous years, and with airport taxes and fees they really do add up.

ANA surcharges on flights beyond Japan

Note: the columns for 2016 and 2020 were compiled when ANA didn’t add any surcharges to Japan, but kept adding them to connecting flights to other Asian destinations.

ANA fuel surcharges on Star Alliance partners: the good, the bad and the ugly!

There are still no surcharges on all airlines of the Americas

Other airlines with no surcharges 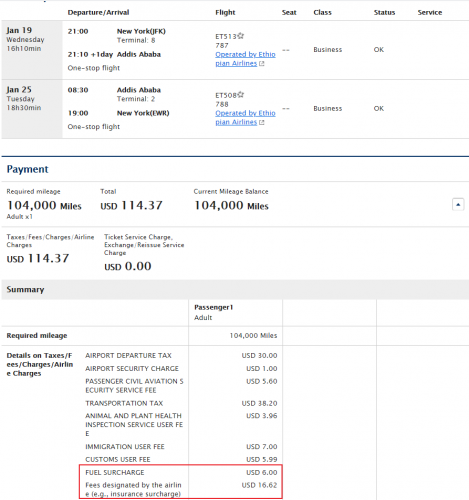 Airlines with low and moderate surcharges

And here comes the ugly

ANA started adding fuel surcharges to its own flights to Japan on June 1 and reinstituted / increased them on most connecting flights beyond Japan. And even though the ANA fuel surcharge between North America and Tokyo is still reasonable ($102 per round-trip), many others are not. So you might want to keep that in mind even if the cost in miles is low. However, you can still redeem ANA miles on partners with no or low surcharges, so it’s not like you don’t have a choice.

Does anyone have plans for using ANA miles? And / or what’s your best ANA redemption so far?

Really good to know. It’s rather depressing but outside of a trip to Jamaica in October, every international trip I’ve set up has been cancelled and I don’t want to start making new ones that are likely to go the same way. Outbreaks, quarantines, uncertainty, and shutdowns have just taken the fun out of travel planning. On the bright side my points and miles balances have increased substantially. I can’t remember the last time I had well over a million airline miles, not even including what I got for my wife. Do you hit the same issues?

Well, my stash has certainly grown over the last 1.5 years because I haven’t gone anywhere. I’ve canceled a couple of flights, but on my own. And my upcoming flight to Lisbon has been changed from JFK to EWR, which is highly inconvenient. And the way things are going right now, it’s in the limbo, too.

I recently booked Turkish RT to the Balkans for next summer and total surcharges were close to $600. Disappointing but still a good deal for business on a good product and my ANA expiration is approaching.

It might be a good deal, but since YQ for US to IST is $366, they’re basically charging you ~$230 more between IST and the Balkans. Did you check ITA Matrix? ANA shouldn’t add anything to the partner’s YQ charges, and if they did I’d at least try to give them a call.

If that’s really what TK charges, I don’t know how they walk around with that kind of cojones.

I just put it through ITA. The route is IAD>IST>PRN, SKP>IST>IAD. ITA shows YR of $512 and the other little charges seem to add up correctly. If I look at just the flights between the US and Turkey (RT), the YR drops to $380. With Kosovo but not Northern Macedonia, it is $446. Same deal if I include Northern Macedonia but drop Kosovo. So the lesson is, Turkish charges $66 each way for the Balkans.

I should also add, I think this still beats the alternatives. If I were allowed to make changes to this itinerary (I’m not familiar with ANA’s rules), I could change to some United flights to skip some fuel surcharges. But it wouldn’t be as nice as Turkish. Plus United goes through western European cities that I believe are more vulnerable to Covid lockdowns than the Balkans and Turkey. Other options are SAS (not as nice), LOT (some surcharges), LH/Austrian/Brussels (much higher surcharges), AC (requires a leg to get to Canada, risk of Canadian shutdowns). And as mentioned before, the use… Read more »

Absolutely! It’s still a fantastic deal, and Turkish is much better than anything you’ve mentioned (and hopefully you’ll also get real business class to the Balkans, not just a blocked middle seat).

Yep, because unlike EU countries, Japan regulators don’t let their carriers rip people off. Well, not too much anyway. 🙂

Used ANA for USA-Taipei on EVA business numerous times for P2. But things are difficult now due to quarantine.

Sitting on several hundred thousand AMEX MR points. No use for them yet.

Burning other miles / credits right now. Maybe can use them next year…

Yep, just checked their YQ starting Oct and the rate from North America has doubled, while YQ from Japan has increased 45%. Sucks, to say the least. I expect the partners YQ might’ve increased as well.

Trying to get to Japan again and revisited this post. Latest data point for Biz class in fall of 2022 (SEA-HND) is now $290/person. Is it because it’s HND or am I missing something?

Also, there seems to be zero FC seats ever available here. I know this is one of the Holy Grail’s of travel hacking but it has to be possible without waiting by the keyboard 331 days out, no? Probably not, ha ha!

It’s not HND. ANA raises the YQ along with the cost of fuel, and the Japanese carriers are at least transparent about it. As for finding nonstop SEA-HND FC — well, good luck with that, LOL. It’s still possible with a connecting flight, but not via JFK, that space is wiped out.

Yes, I believe I will always lose those FC seats…just like I lose eBay auctions to those guys that “snipe”. Ah, well, I’m happy with business too!