Breakage is a term used to describe revenue gained by retailers through unredeemed gift cards or other prepaid services that are never claimed. In these cases, the company pockets the money paid for these items, without actually providing the service or item for which the customer initially paid.

I wrote my last big AmEx Platinum post 1.5 years ago, at the height of the pandemic here in NYC.

AmEx Platinum New Benefits and Beyond – What Do You Do Now?

The article lists several grievances that I wholeheartedly agree with. How can you not?

The AmEx $200 incidental airline fee credit is notoriously difficult to use. Not only do you have to choose ONE airline to get your credit; not only do you NOT get your credit for buying an airfare, but even selecting / upgrading your seat may not trigger the reimbursement depending on how it’s done.

The $200 prepaid booking hotel credit is useless for most people. For one thing, you must book on AmEx Travel, and choose a hotel from Fine Hotels & Resorts or The Hotel Collection. I’m sure I would be able to find some value if I worked on it creatively, but that’s the point – why on earth do I have to work to enjoy benefits that come with the highest annual fee in the nation?

The $240/year Entertainment Credit is a joke. Seriously, it’s hilarious. They offer credit for these 5 choices.

And that’s it. If AmEx were a comedy troupe I would applaud them for creativity – unfortunately, they’re being dead serious calling THESE entertainment credits…

Centurion lounges? No more guests in the lounge unless you spend a whopping $75,000 on a god-awful earning card. Did I mention how god-awful the AmEx Platinum earning rates are? No? Immensely awful! 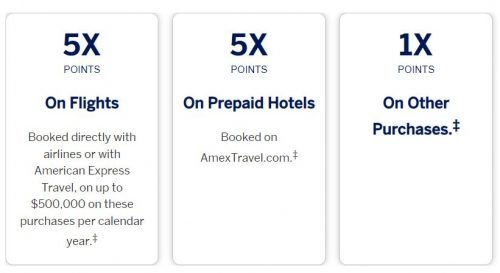 Are the “complicated” AmEx Platinum benefits worth $695 with these earning rates? You decide!

Priority Pass lounges? No more access to 70 or so airport restaurants around the world. Only AmEx has this restriction – not Citi, not Chase, not Capital One!

The $100 Sacks credit is laughable on its own merits, but even that AmEx deemed too generous, so they split it: you get $50 from January to June and another $50 from July to December.

Then there is the Equinox $300 credit broken down to $25 a month. Sounds awesome until you realize that the cheapest fancy-shmancy Equinox membership costs about $170 a month! What a riot!

Tell you what: AmEx has more hoops to jump through than the whole U.S. Olympic Gymnastics team.

The only reason for these complications is to make it harder to use the benefits.

It would be super easy to let people get credit for any airline or hotel purchases without any registration and let them use their full credits right away. But then, more AmEx Platinum cardholders might actually decide to cash out these benefits and that would cost AmEx more money. Where is the fun in that?

Well, I’ve got a word for you. It is insane!

Still, are AmEx Platinum benefits worth it in 2021?

If you can get that 100,000, 120,000, or 150,000-point welcome bonus, that’s still worth it. Transfer it to an airline program of your choice whenever you’re ready to go. Unless you happen to have a Schwab card, in which case I would cash out enough to cover the annual fee.

But holding it beyond the first year? I don’t see why. Sorry. Not with the abysmal earning rates and benefits most of which aren’t easy to use.

But aren’t there any tangible AmEx Platinum benefits?

Of course, there are. Let’s take a look.

Clear has gotten to a lot of major airports. It’s a useful program. On a couple occasions, I’ve been crawling in my TSA Pre line while people would zip past me in the Clear. Still, would I pay $180 for it?

First of all, both Delta and United frequent flyer programs offer a $60 discount on Clear to their members, so your real cost would be $119. To tell the truth, however, that’s still too rich to me. I’d value Clear at $50 a year. Maybe.

Nice to have, but barely tangible. At some points in the past, I had Priority Pass access from several cards at the same time, and yes, Centurion lounges were nice. However, the elimination of restaurant access has neutralized that benefit, IMHO. Furthermore, the Capital One Venture X card gets you access to Priority Pass lounges and restaurants for $395. And guess what: the AmEx Hilton Surpass gets you 10 passes to PP lounges (but not restaurants) for $95. For most families who don’t fly more than 3-5 times a year, that’s sufficient.

And that’s all the tangible (and barely tangible) benefits I can think of.

But what about the $155 Walmart+ credit

Sorry, not tangible at all to me. Not even a little. However, even if you value free Walmart deliveries, that’s not $155. It costs $98 paid annually, and why would you dole out over 50% more to pay month by month?

To sum it up, the AmEx Platinum is not the card to HODL. That much is clear.

But I understand if you totally disagree!

Look, there are people who book enough flights directly to greatly benefit from 5x on airfare. And if you mostly travel solo on business, you don’t care about guest access to a Centurion Club

And there are folks who already love Audible or / and Equinox and pay for it anyway, with or without Amex.

If you’re one of these people, the AmEx Platinum benefits might well be worth the $695 tag.

Everyone else, however, might find AmEx Platinum with its “complicated” benefits to be the most expensive, yet “cheapest”, credit card available to the public, IMHO.

To me though, it’s beyond obvious that the AmEx Platinum benefits are complicated by design in order to create breakage and ensure that as few people as possible can actually use them.

In that sense, “complicating things” is totally necessary — to AmEx’s bottom line.

The card is obviously valuable for the first year thanks to the huge welcome bonus. But are AmEx Platinum benefits worth anything after that?

Well, they’re definitely worth something, but not that much. I don’t see any reason to pay ~$700 a year for a card with abysmal earning rates and a bunch of “benefits” that only benefit a limited number of cardholders.

Your turn. What do you think about the AmEx Platinum benefits? Please share your thoughts.

Careful! I thought the $200 hotel credit was exactly how you wrote it in the article and, if you tried to use it like that, Amex would screw you (with no remorse). In the first days that this credit came out, I booked a hotel in the UK with the same understanding that you wrote about it. But here is actual wording…I capitalized the key word: Save by getting $200 back in statement credits each year on PREPAID Fine Hotels + Resorts® I could have sworn that this word was not there in the early days but maybe I was… Read more »

(Jeez, how to put line breaks into a comment??)

Yes. “Get $200 back in statement credits each year on prepaid Fine Hotels + Resorts® or The Hotel Collection bookings with American Express Travel when you pay with your Platinum Card.” I’ll add it, thanks!