Gary Leff has written quite a few posts about Spirit suckiness, so it’s almost like deja vu every time. Of course, all of them are about how terrible Spirit Airline is and how no one in their sound mind should ever board this terrible, terrible airline.

No, seriously—Spirit Airlines is a terrible airline. This is not a subject for discussion. This is a fact!

It’s just that Spirit Airlines is too freaking awesome in terms of gameability to be ignored. Anyone who refuses to accept this simple fact—or is too stubborn to admit it—must hand back their travel hacking license.

I left a couple of comments on Gary’s blog a while ago about why I thought he was wrong about some of his assertions. He never replied. No biggie, he is a busy man.

In the last couple of days, Gary has written two more posts about Spirit (here and here). The first, about the new Spirit Baltimore-LA route and why he wouldn’t fly it even if his life depended on it. The second was today, explaining why he wouldn’t be caught dead flying Spirit in general. There are two major gripes Gary Leff has about Spirit.

His major gripe with Spirit is this:

No arguing about that. I’ve had the  misery  of flying in a regular Spirit economy seat once, and I rue the day. Never made the same mistake ever again!

Think about that: 2300 miles flown in an aircraft with 3 less inches of legroom than United, Delta, and American. One thing, perhaps, on a flight from the East Coast to Florida. But this is a true Spirit Airlinestranscon.

Yes, that would be totally inhumane. But the thing is, no one makes you fly in a regular Spirit economy seat. That’s stupid, especially if you know better.

Gary Leff does know better. He is a bona fide expert, not a fluke, and he knows more shit about aviation and loyalty programs that I will ever know (or want to know anyway). So Gary is aware about the Big Front Seats and how ridiculously cheap they can be had. It’s just that what he thinks he knows about them is wrong.

Well, there is one problem with this statement. It’s even cheaper than that.

It’s not up “…to $199 extra”, it’s more like up to $75. Yes, I know Spirit says “up to $199” on their website, but that’s probably to cover their asses. The pic below represents the longest flight in their network, and you will receive an offer to upgrade when you are finalizing your booking. Please note, I’ve never booked revenue Spirit flights, but I presume it works the same way. 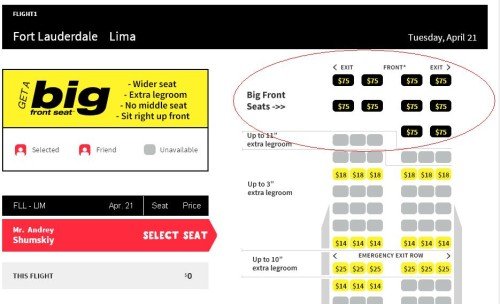 When you book your award flight you will see this upgrade option. Take it!

Gary also doesn’t like the 36″ pitch. Well, I don’t know, but an AA domestic first class pitch on A319 is 38″, just a couple of inches more. I am a big guy, and I guess, I could’ve reached the wall in front of me with my foot, but does it matter? And just for the record, my BFSs have reclined on all my Spirit flights so far. It’s a comfortable seat—every bit as comfortable as a domestic first class seat on Delta, United, or American.

Here is a simple formula.

Gary’s second gripe with Spirit is this:

When flying Spirit you don’t get TSA PreCheck. Not only don’t they have a deal with TSA to grant it to passengers based on status and other date, they don’t even pass through a Global Entry Known Traveler number.

Well, that’s true. You don’t. In all honesty, I don’t see this shortcoming as something crucial that would prevent me from flying on a particular airline on an award ticket, but if you feel so strongly about it, that’s a valid concern.

Gary’s main gripe with Spirit is this:

The biggest issue is that they don’t have a big, redundant route network. That’s at the heart of their business model, it’s how they make money. But it also makes them less reliable.

It sounds terrible. Sure—no redundant network. Sure, only 54% of their flights were on time. But can it be that it’s not as terrible as it sounds?

The delay difference between the bronze runner up Delta and the worst in the show Spirit is 14 minutes! So once again, can it be that the numbers taken out of context might sometimes be slightly misleading? 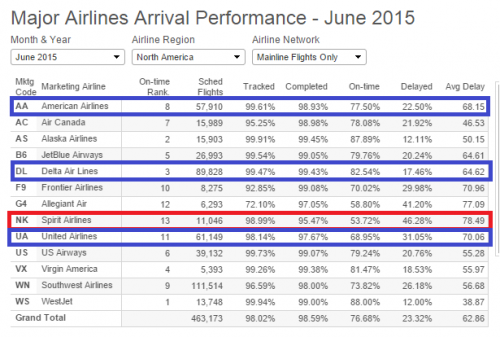 But there is another, more serious issue. No redundant network. When something goes wrong, Spirit simply doesn’t  have more planes to pick you up, sometimes until the next day.

That sounds awful, but there is a solution. Can you guess what it is?

Avoid Spirit when you need a connection.

Surely, you don’t always need a connection, do you?

There are things you already know You know that in order to be successful in this game you must diversify. You also know that one size never fits all!

So why take one example when flying Spirit might not be optimal and state it as the main reason not to fly the airline at all? There are plenty of examples when Spirit is no good. Connecting Spirit flights on award tickets mostly (not always, but in most cases) suck anyway mile-wise. Speaking of which, here is the list of airports and destinations from best to worst (the number of flights might be slightly outdated).

Airports and the number of Spirit nonstop destinations

Notice how I said “when flying Spirit might be no good”!

Why? Because I honestly don’t think that Spirit will kick you to the curb if you’re late for your connection.

Of course, I wouldn’t want to be the one to test this theory. So when last year I took my Spirit flight to Cancun with a short connection at FLL, I had the plan B in mind. I made sure that there was an available AA flight to Cancun from MIA that I could quickly book on Avios should things have gone wrong. I didn’t sweat it because—I don’t know—I’d had good experience with Spirit, as it had never been terribly  late for me.

But my precautions might’ve been unnecessary anyway, as there is at least one account from Hills First Travel that Spirit will actually rebook you on another flight if you are to lose a connection, at least due to a mechanical problem.

There was a man in front panicking because he would not make his connection because of the delay… The flight attendant calmly explained to him that since it was a mechanical issue Spirit was responsible for putting him on another flight (on any other airline available) to get him to his destination when he needed to be there. So he went, talked to the gate agent, then came back, got all his stuff and left our flight.

And this is a story from the same blogger about Spirit accommodating people during the storm for which, understandably, they were not responsible at all.

Having said that, I will admit I would rather be traveling on a legacy carrier in case of IRROPs. However, give me a choice of flying in BFS for 2,500 miles (and a little cash) vs. coach on legacy for 25,000 miles, I will choose Spirit in a New York minute. At least when I can afford to be a little late.

The Value of Free Spirit Miles

What can I say? It can be garbage. Or it can be a fantastic deal, just like with most programs. If I find Spirit useful in this town that only has 5 nonstop connections, then I don’t know about all of you guys living in a city on the top of the above list.

Just today, Miles to Memory wrote a post about the better BofA Free Spirit miles offer and how to get it.

Ok so today I was searching for an upcoming trip and made it to the final confirmation screen for a booking. I’m not sure if I want to fly Spirit, but that isn’t the point of this post. On the final confirmation screen I saw an offer for the Spirit Mastercard. It normally comes with 15,000 miles after first purchase, but this offer throws in a $100 statement credit after $500 in spending during the first 3 months.

Is it worth it? Of course, it is! You’re making money. It saves you $159 compared to the regular offer (which, btw, is worth it too). And 15,000 miles means 6 one-way flights IF you are flexible and live in one of those hubs that have your name on it.

That’s not all, however. You can also get 9,500 more Spirit miles after completing these two 2-minute fun tasks. That will get you 25,000 miles. Which, in Spirit terms, means a fortune if you spend it right!

The Definitive Guide to Gaming Spirit: In Depth. Part 2

The Definitive Guide to Gaming Spirit: Tips and Tricks. Part 3

Yes, completely different! I don’t usually invite people to write for my blog; and I haven’t made an exception this time either. Hiring people to write for you sucks. Bastards want money. I should know as I’m one of those bastards, too. So on my own blog I won’t have any of this. Travel humor, however, is… END_OF_DOCUMENT_TOKEN_TO_BE_REPLACED

Simple. Ebola scare isn’t over yet. Now, I’ve never pictured Chris Elliott as a fear monger. Don’t get me wrong, he is wrong about many things. As a self-styled David fighting against the Frequent Mile industry Golyaph (but unlike the popular myth with no chances to win), he has been wrong almost every time… END_OF_DOCUMENT_TOKEN_TO_BE_REPLACED

Universal fact #GermanyvsArgentina #WorldCupFinal pic.twitter.com/ITZCxGMraa — Bilal Naseer (@BilalDunyaNews) July 13, 2014 Want World Cup in one word? How about this? Massacres! What a string of unexpected, spectacular defeats! The Mighty Have Fallen. Hard… Spain, the king of the world, decimated by the Dutch and Chile… Yes proved last night. 5-1 “@RobbertMoree: Oranges are… END_OF_DOCUMENT_TOKEN_TO_BE_REPLACED

Brazil Moment of Truth So, Chile is out and Brazil is in. Barely! In today’s game, Chileans came this close, no really, THIS CLOSE  to the win on 120th minute (that’s right!), when Pinilla fired a cannonball shot that smashed off the crossbar and made the heart of every Brazilian skip a beat. As a result of a 1:1… END_OF_DOCUMENT_TOKEN_TO_BE_REPLACED

This post could have easily been named: How The Mighty Have Fallen Two great teams are leaving Braxil after a week: England and Spain. Already on life support after the incredible 5:1 beating from the Dutch, Spain was finished off 2:0 by the Chileans, having made it the worst defeat in the World Cup history for… END_OF_DOCUMENT_TOKEN_TO_BE_REPLACED

Toilet humor, anyone? No, not today. Since my last week Late Saturday Night “column” has been well-received (meaning getting a few clicks above the usual two or three), I’ve decided to try and reproduce that success by turning it into another scheduled feature (just like my other scheduled features I can never keep up… END_OF_DOCUMENT_TOKEN_TO_BE_REPLACED

What the hell! Not everything is about miles, right? In my mail today, I found this Quora collection of airplane jokes, titled: What are some witty and amusing things you have heard on an airplane?  For those who don’t know, Quora is a really interesting and different social platform. Ask a question, and dozens if not hundreds of people will… END_OF_DOCUMENT_TOKEN_TO_BE_REPLACED