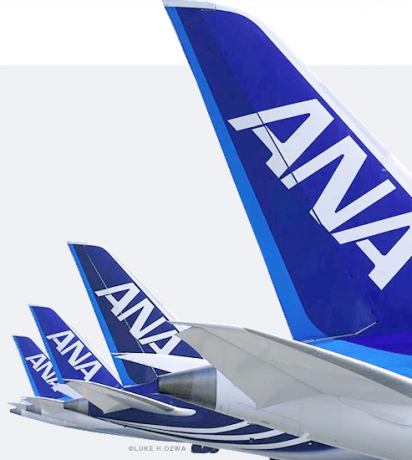 This is my final ANA frequent flyer program post. Here are the previous installments:

I started this series in May – over 6 months ago. In my review I’ve tried to make the case that ANA Frequent Flyer Program offers exceptional benefits to its members, especially in light of all recent and not so recent devaluations.

No, the program isn’t perfect, but we know better than expect perfection from anything.

ANA Frequent Flyer Program: The Good And the Bad

Mostly Positive. You can get ANA miles by transferring points from American Express Membership Rewards and Starwood Preferred Guest programs. That’s not too bad, but when the SPG gets fully integrated into the Marriott Rewards program, who knows? In addition, you can pool miles with family members, and when I say “family,” I’m using the term loosely.

A mixed bag. It doesn’t allow one-way travel. Not for 60% of the round trip, not for anything; you must book a round-trip flight. On the other hand, you can have a stopover and up to 2 open jaws. Backtracking is usually permitted.

Positive. I analyzed (and over-analyzed) different award values, and have come to the inevitable conclusion that in terms of general long-haul flights value, ANA Mileage Club beats all major U.S. airline frequent flyer programs by a mile, especially in business. There are a few exceptions, but simply put:

That wide range above includes both ANA and the partners. If you fly on ANA metal, the levels are even better.

Mostly positive, especially if you can book in advance — just read the linked post. Weirdly, on many flights First Class space is wide open, even when economy and business seats are not.

Mixed Bag. On the one hand, you can search and book every Star partner online (including Singapore). On the other hand, using ANA’s search engine is twice as hard as British Airways’.

Why? Because of ANA’s round-trip fixation. It’s already too bad that you can’t search segment by segment. But the real problem is that when one of your segments doesn’t have availability or violates some of its rules, you have to start all over, from step 1. ANA’s search engine is really designed to test your sanity.

What’s the solution? I always start my search with United. That’s not ideal, because United can be quirky, even with a user friendly calendar option. But in most cases, United accurately (although not always) reflects Star Alliance’s availability, including ANA’s.

Some folks like to use the Air Canada Aeroplan engine to search for Star partners. I really don’t, as the AC search engine is full of quirks of its own.

A better free way to find ANA award space with a surgical precision is a Chrome extension aptly-named Award Finder. You can set a number of parameters, like the particular airline, class of service, and even the number of stops, and get very reliable results. You can also search multiple dates, although when you do, be patient — it can take a while.

It’s … complicated. Now, fuel scamcharges are my favorite pet peeve. I hate the damn scam, and I don’t mind screaming about it from the rooftops. A great thing about Japanese airlines (and regulators) is that they are trying to be fair. So award flights on ANA own metal should supposedly be surcharge-free.

ANA Fuel surcharges: None, or so the say.

“Supposedly,” because it’s not always the case. Sometimes, ANA is true to its word. 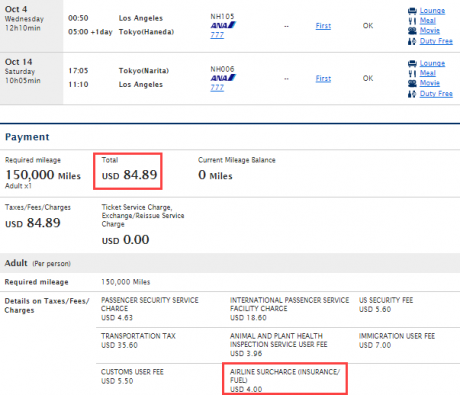 You won’t pay a fuel surcharge for a flight from the U.S. to Tokyo 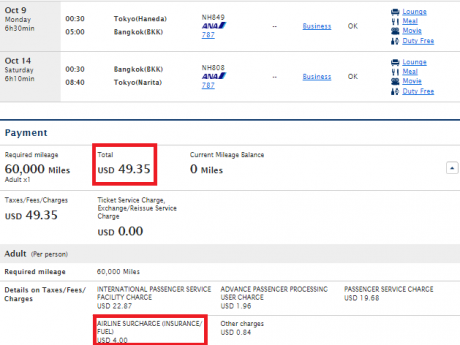 Or between Tokyo and Bangkok 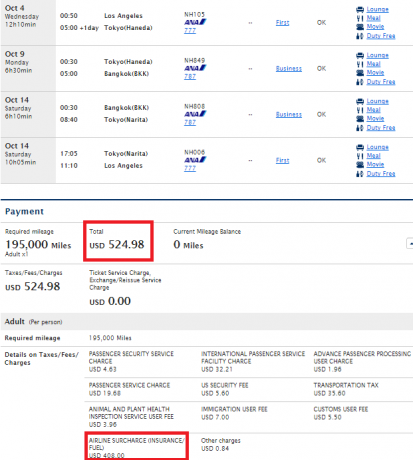 But for some reason, you pay a surcharge for a flight from the U.S. to Bangkok via Tokyo.

Now, I don’t have any idea why it’s happening, and in what twisted world the sum of $4 and $4 equals $408. ANA agents could never explain clearly why they apply a fuel surcharge for flights via Japan, yet don’t apply it for flights when Japan is a departure point or a destination. I think, if you demand that the surcharge be refunded (after using your ticket, mind you), they will have a very hard time defending it. In the end, ANA’s own website says it shouldn’t be there.

But really, I wouldn’t sweat it too much, because there are ways around it. In fact, if you want that particular flight (with LAX-NRT in First Class and LAX-BKK in Business), you’ll be better off booking them separately. Sure, it will cost you 15,000 more miles, but you will save $400.

Besides, ANA adds the scamcharge very inconsistently. My research showed there won’t be any fuel surcharge for:

And a cheaper surcharge for:

Note that I haven’t checked every single route ANA flies, so it might not be a complete list.

ANA does add surcharges to most of its partners, except:

Mostly positive. One major drawback of the ANA Frequent Flyer Program is that your miles expire after 3 years (except for Diamond members), and there is no way to reset the clock.

That’s a huge benefit compared to the U.S. programs!

I’ve already written how ANA saved my ass in Sao Paulo and Stockholm, both times having gone above and beyond. But I’ve never flown ANA, so all my interactions with ANA customer service were on the ground. I presume, they are not too shabby, though, not only because ANA is a 5-star Skytrax airline, but most importantly because of what people say about the service and overall experience. While I’ve only used ANA miles on partners so far, I look forward to experiencing an actual ANA hard product.

Last but Not the Least

ANA will charge your infant 10% of revenue ticket. Has nothing to do with miles, but nice to know (Thanks Raj!).

So this is it, folks. Took me long enough to complete this series, but in my opinion, ANA Mileage Club is the best overall frequent mile program for an international, long-haul U.S. traveler.

Don’t know about you. Yes, no, maybe?

I’m resuming my weekly newsletter and going to make an important announcement in the next one that comes out on Monday, Dec 5.

great series. curious what the annoucement will be? haven’t received any newletter today

[…] Lazy Traveler wraps up its thorough review of the ANA Frequent Flyer Program. If it wasn’t for them hideous fuel surcharges and the fact the miles expire after three […]

Great summary. If you cancel an award ticket, do you lose the taxes paid in addition to the 3,000 mile fee or are those refunded?

I’m reasonably certain they do get refunded.

This probably doesn’t concern a ton of your readers, but I was curious and their lap infant policy is similar to most airlines: 10% of revenue ticket.