Either that, or I might’ve been way too lucky before. Despite churning credit cards for many years, I have only been denied a few times, and most of the times in my early days when I just started out and didn’t know that no doesn’t really mean no. In the last five or six years, I only remember two denials I have been unable to overturn.

Well, fast forward to my most recent app-o-Rama three days ago. Here are the cards I’ve applied for.

Was instantly approved for AMEX SPG, was later approved for for Citi AAdvantage, BoA Alaska, and Citi Hilton (only had to call Citi AA Executive because they told me to). Received a delayed decision from Wells Fargo, and then this: 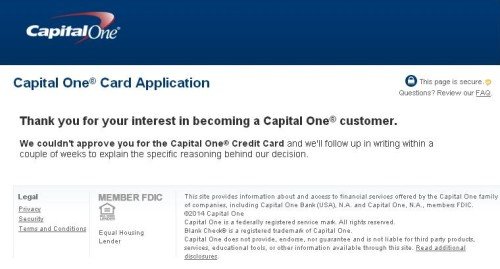 Capital One denied me. Me! A churner extraordinaire! A credit card sorcerer! The master of my domain!

What have I ever done to you, CapOne except closing your card about two years ago, because why on earth would I pay your annual fee that you did refuse to waive?

I have called twice since the denial, but they would insist that they didn’t have access to my file and I had to wait until I would receive the actual letter. I will try again on Monday, but if this denial holds, it’s is not a good thing for me and here is why.

Capital One is not your regular bank. They love being thorough. They pull all three credit bureaus. Which means that every future creditor will now be able to see that I have been recently denied a credit card, because the hard pull is not going to correspond with a new account.

And this is why Cap One’s pulling habits are not as harmless as I thought before. I intend to fight it of course, and see what happens.

And then strike number two. I called Wells Fargo for the application status, and they requested the proof of income!

Now, here is what I don’t understand. You see a dude with a 20-year credit history, 800-score, and almost 0% utilization rate. You see plenty of other accounts this dude has or has had including credit card accounts from every major issuer.

Explain to me why you feel compelled to make the said dude jump through the hoops in order to get your credit card, which–quite honestly–you should be begging him to grab if you want to expand your customer base and compete with the big boys on the block. Because quite honestly, Wells Fargo, you are pretty much invisible as far as the credit card market goes.

In 20 years that I have been applying for credit cards, I have never been asked to provide the proof of income. Not once. Not when I was a student. Not when I was making $5 an hour. It has just never happened!

So what’s the big deal, you must ask. Here is why this is a hassle: I’m self-employed. They want me to fax them two years of my complete (yes complete) tax returns. That’s two bricks of documents to fax over. Look, I could understand if I just entered the job market, or if there had been any other red flags in my credit file, but I honestly can’t think of any. My first impulse was to tell them to go to hell with their 40,000 points, and I promise I would, if it hadn’t been for Capital One’s denial. Two pulls that don’t result in new accounts is a bit too much.

Or maybe I’m overthinking it. Not having experienced a lot of denial or hoops to jump through, has its downside, I guess. They come as a shock.