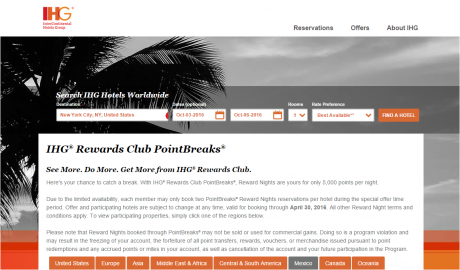 In my post a few days ago I rounded up a few free miles opportunities.  Miles, Points, Credit Cards: 05.17-05.24 | Spark, Lufthansa, Spirit, Turkish, Aeroflot, and More So, here I come for more. Not to take more, but give more. Am I a world-class philanthropist or what? To recap, here are a few deals… END_OF_DOCUMENT_TOKEN_TO_BE_REPLACED

The new IHG PointBreaks list is out, and there are a few amazing bargains in it. IHG has initially released locations only, so huge HT to Loyalty Lobby for putting the names to the places. The PointBreaks hotels will only become bookable on Monday, September 29th. As a reminder for those folks who are… END_OF_DOCUMENT_TOKEN_TO_BE_REPLACED

Aloft is a visually striking and very distinctive brand in the SPG family; I would call it a younger and poorer cousin to their other brand W. It’s still hip, stylish, and youthful (I would use the word boyish, but that would be sexist 🙂 ). I’m sure a lot of people like the style and appreciate the… END_OF_DOCUMENT_TOKEN_TO_BE_REPLACED

It’s been a while since I flew on Spirit, and it didn’t disappoint. It brought me to Cancun an hour late due to some computer issues, but luckily, the problem occurred on the second leg from FLL. If it had happened to my New York flight, I wouldn’t have made it. The Big Front… END_OF_DOCUMENT_TOKEN_TO_BE_REPLACED

I catch a lot of flack for not covering hotel promos. I just don’t. I have this ridiculous desire of writing about things that interest me. That does backfire at times, as different people have different interests. My situation is unique, as I rarely pay for my travel. I rarely go on a business trip, and… END_OF_DOCUMENT_TOKEN_TO_BE_REPLACED

My New Book is Out That’s right, my own plug comes first! 🙂 Honeymoon and Luxury Travel is absolutely perfect for newbies and intermediate hobbyists alike. Take the anguish out of your lives and start living, while you’re still learning. It has everything you need to organize your perfect luxury trip. You and I can make fun about… END_OF_DOCUMENT_TOKEN_TO_BE_REPLACED

OK, I don’t usually do that (write catchy titles to post deals with the limited appeal), but I actually find this offer very interesting. You can try your hand in getting some sweet Business and Economy Comfort tickets out of Hong Kong for HKD$100 each ($12.90). The deal includes Hong Kong security tax but excludes everything… END_OF_DOCUMENT_TOKEN_TO_BE_REPLACED

My New Book is Coming Out. Yes, for Real, This Time.

This is probably going to be the shortest post ever. Just wanted to give you the heads up that my new book Honeymoon and Luxury Travel; Free and Cheap is [finally] coming out tomorrow. Unlike my other books, this one is about those special aspirational trips when you need every luxury you can get. This is… END_OF_DOCUMENT_TOKEN_TO_BE_REPLACED

That $19 Offer for an All Inclusive Resort Is Still Working, And a Hack

Gone as of 08/06 The $19 PPPN offer I wrote about in my previous post: No, Not Again! All Inclusive Resort in DR for $19 PPPN! is still going strong even after the supposed expiration date. No surprise there, as they did it in the past, too. One thing I forgot to mention, however, is that even… END_OF_DOCUMENT_TOKEN_TO_BE_REPLACED