I love to see airlines fight. Per Flight Deal, there is a price war going on right now between AA and United.

United has been attacking American / US Airways fares this week to Mexico. American is finally returning the favor out of:

Since it’s kinda late (and I’m not really planning a trip to Mexico), I didn’t go to ITA, but hit Priceline instead to see what’s going on. The first few searches for both Cancun out of Newark gave me 80% success rate. My tries with Cabo and Puerto Vallarta were less productive: I would either not get low fares at all, or I’d get an overnight layover. I would say my success rate was a bit lower, about 40% (2 tries out of 5). But I have found them all eventually, with reasonable layover times.

Best flights with the shortest layover time I’ve found, were on US Air. 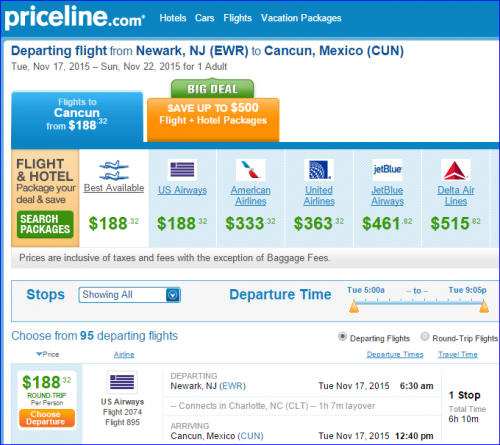 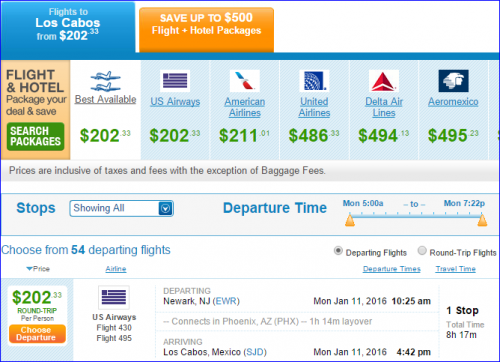 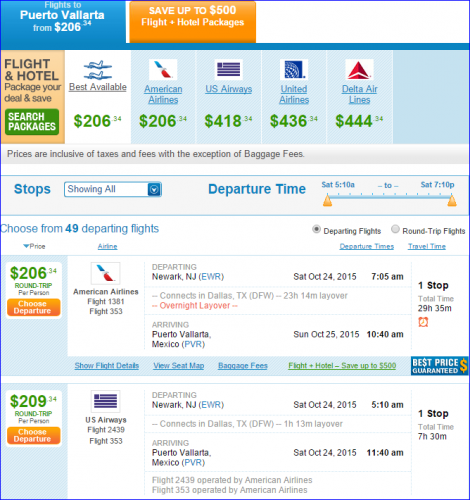 These fares won’t stay alive for much longer. If you still see them in the morning when you wake up, make sure to grab them quick!

Please go to the Flight Deal site and book your flights over there, since they get a few coins when you do, and they totally deserve it!

Fare mistakes are the Holy Grail of travel hackers. You can often get a premium class seat or a fabulous hotel stay for pennies on a dollar. All you need to do is to get on it fast. Mistake fares live short, if very productive lives. 🙂 That window of opportunity can last only from… END_OF_DOCUMENT_TOKEN_TO_BE_REPLACED

And the winner is… Wait, later about that. The whole idea or a huge part of why this hobby even exists, is fighting the man. Or men. Men who have fought a good fight to keep us away from getting into that lie-flat seat, gorging on gourmet food and gulping down Dom Peringnion without even… END_OF_DOCUMENT_TOKEN_TO_BE_REPLACED

Full American Airlines AAdvantage Reduced Mileage Awards List Those of you, folks, who are holding one of the American Airlines credit cards above, have access to generously reduced miles award redemptions in the United States and Canada. Of course, the British Airways Avios will still go a longer way for very short hops, but in all… END_OF_DOCUMENT_TOKEN_TO_BE_REPLACED

Lufthansa Pilot Strike Leaves 150,000 Passengers Stranded UPDATE 12.03.14:  The pilots’ union Vereinigung Cockpit said there will be a new strike on Thursday as a result. It will affect long-haul and cargo flights and will start at 3 am local German time (0200 GMT) and last until just after midnight. Negotiations between the union and… END_OF_DOCUMENT_TOKEN_TO_BE_REPLACED

Today Only: Grab a Perfect Spirit Airlines Carry-On Wheeler and Earn 18 United Miles on a $!