How to Take Advantage of Fifth Freedom Flights (Part 2)

The first part is here:

Fifth Freedom Flights Can Save You Some Serious Miles or Money

But how to find them? There are no reliably updated FFF databases as far as I know, and things change all the time.

Why do things change? For one thing, national airlines lobby their respective governments all the time. Understandably, national airlines don’t like it when their foreign competitors pick up the breadcrumbs from their own table. Another reason is that airlines always tweak scheduling to increase profitability. So the only way of finding FFFs (again, AFAIK) is empirically. And it’s much easier and faster than you might think.

First, find a good (but certainly outdated) database. I like the one from flypointyend.com that I linked to last time because it’s organized by the cities rather than the airlines, but since then, I’ve found another one compiled by Forward Cabin. So use these two for now or look for other databases periodically.

So how do we know if the FF routes listed in these databases still exist?

I find airports Wiki pages an invaluable resource for all kinds of researches, and the FFF research works perfectly fine, too.

Let’s say you want to know if you can still fly between Abu Dhabi and Phuket on airberlin as outlined in the Flypointyend’s list. 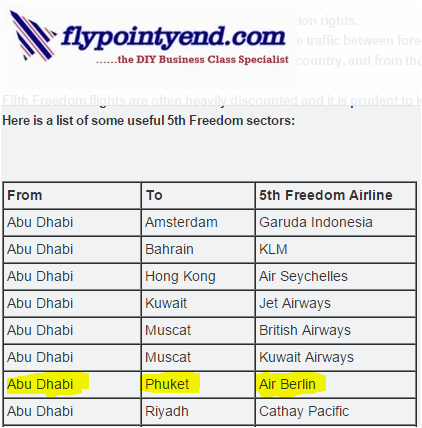 Google the Abu Dhabi airport Wiki and check where airberlin flies from Abu Dhabi. As you can see there is not a word about Phuket.

Can it be that the Wiki page is incorrect or incomplete. Sure, it can, but in my experience the airports’ Wiki pages are fairly accurate. However, if you want to double-check, just google the Phuket Airport Wiki and repeat the search. Now, there is no mention of airberlin at all.

Is it possible that both Wiki sources are incorrect? It is, but in all honesty, I would stop digging at this point as I believe the odds would be against it.

This “vetting” method can seem cumbersome, but it will take you less than a minute to verify if the FF route between two destinations still exists.

So what to do after you confirm that the FF route you’re interested in is still there? Go to your favorite award search engine, of course, but remember that none of them shows all airline partners, and some might show phantom availability. Sometimes, you just have to call.

As we can see, Iberia has fairly decent availability on this route, so why LAN? Because Iberia flies a typical lousy intra-Europe A320 on this route, with a blocked middle seat in a business class cabin. LAN flies a 787 on route to or from Santiago with lie-flats in Premium Business and a good seat in economy that beats Iberia economy with a super-duper, extra-long stick. 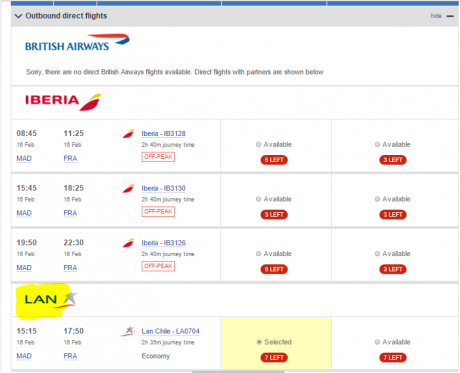 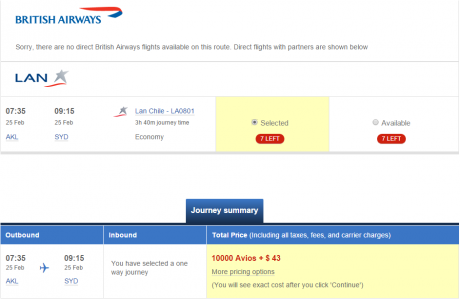 Looks expensive, but might be worth it when you need a non-stop flight, and Thai is unavailable.

Here are a couple Fifth Freedom routes you can book with Delta SkyMiles. Neither is particularly cheap, though, especially the one on China Airlines with their scamcharges. 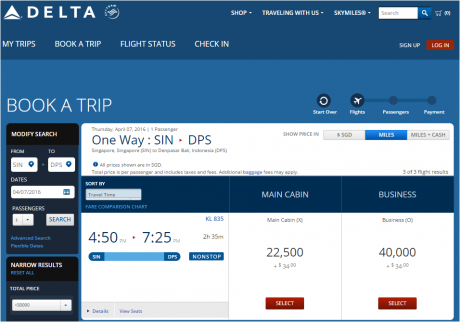 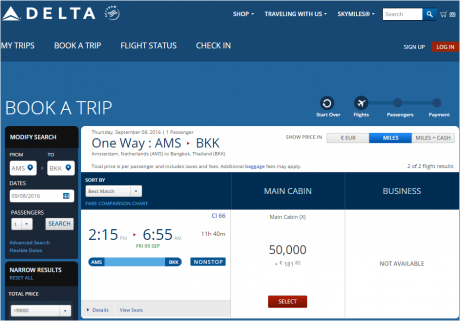 Questions? Corrections? Suggestions? Praises? Please leave a comment in that rectangular space down there.

[…] about them and how they are named numbered. Great info, thanks! And then Lazy Traveler continues to dig into great obscure Fifth Freedom flights. You can fly Singapore to Bali on KLM using your crappy Skymiles, bet you didn’t know […]