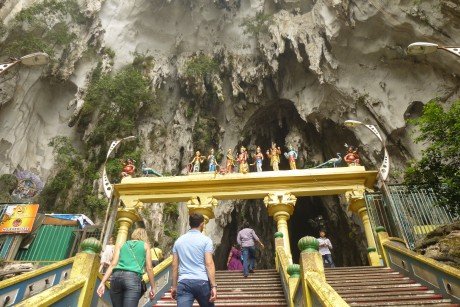 Don’t sweat over choosing a cab

In general, there are two types of cabs in Kuala Lumpur: Budget and Executive. Executive cabs are more comfortable than Budget, although Budget cabs are perfectly fine for one or two people. The two most important things about a Kuala Lumpur cab are the air conditioner and the seatbelts, and from our experience, they work.

There is, of course, the third kind of taxis—clunkers. I picked one when there was no official cab in sight for over 5 minutes, and this guy in this tiny little metal box on the wheels kept begging me to get in. It was fine, too. It got me where I was going, and the seatbelt worked. Can’t say the same about the air conditioner.

Cabs are dirt cheap in Kuala Lumpur. A ride in a Budget cab shouldn’t run you over RM20 anywhere in the city, and most rides are about RM6-10. X2 for Executive cabs, and you’ve got the idea. There are plenty of complaints about Kuala Lumpur cabbies not willing to turn on the meter. I don’t know. In my experience, every cabby in KL was honest, polite and friendly. YMMV.

Hiring a cab in KL is a great way to do the sightseeing, too.

OK, there is no such thing, but you can make it work. If you use a travel agency, booking a private tour to visit the most popular sites outside of Kuala Lumpur will cost you 200-250. As in 200-250 dollars.

Since we were pressed for time, we did want a private tour. I don’t mind going on a bus with other travelers, but not when it’s my last day in the city.

The problem was, we are both budget-oriented, Timmy and I. Free flights, free hotel stays, and now they expect us to spring $250 for a glorified car ride! What a nerve, we thought. There had to be a better way. And in fact, there was.

We went to the taxi plaza in front of the Petronas Towers and asked the attendant how much it would be to hire a cab for the day. He quoted MR500. That sounded much better than $300, but…

We decided to walk away and see if we could do better without a middleman. We flagged a nice, newish-looking Executive cab, well, actually he was kind of pulling over on his own trying to anticipate our needs as we were walking next to the road. Our needs were to hire him for the next day to see the caves, the monkeys, and the fireflies. This is how we explained it to him, and he knew exactly what we wanted. We agreed on RM250. And he offered to give us a free ride to the hotel, which was very close by, but nevertheless, a nice gesture.

Thinking back, we probably could’ve gotten it cheaper, but he spent 7 hours total with us and his car and service were excellent. Seriously, who needs to sit on the bus full of other tourists when things are that cheap? 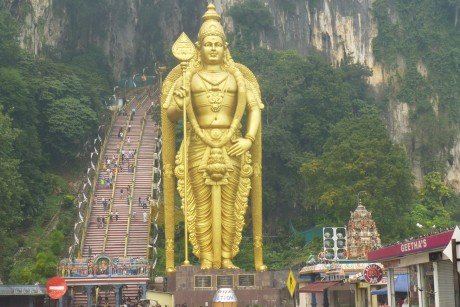 At TBEX in Bangkok, I chatted to a Malaysian blogger who told me that the Batu caves were nothing special. I disagree. If you find yourself in Kuala Lumpur, do go there . Yes, the whole huge area with dozens upon dozens of tourist buses does look like one giant tourist trap, but we really enjoyed our time there.

One thing I regret is that I didn’t go for the so-called Dark Cave tour. That’s a special guided tour that takes you deeper into this hundreds-of-millions-year-old ecosystem with bats flying over your heads. From what I remember, it cost about RM35, or about $8. Well, we didn’t have much time so we took the easy way out—272 steps up. How do I know there were 272 steps? Because I counted each and every one of them!

The appearance of the inside of the cave wasn’t… well, how to put it—-stellar. 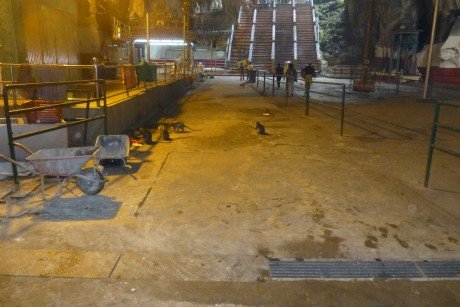 But it didn’t matter due to the abundance of the local wildlife. I spotted the cutest little duo you’ll ever see and followed them around. 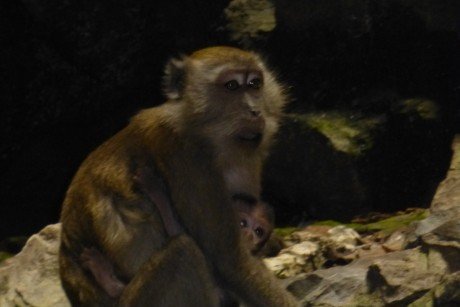 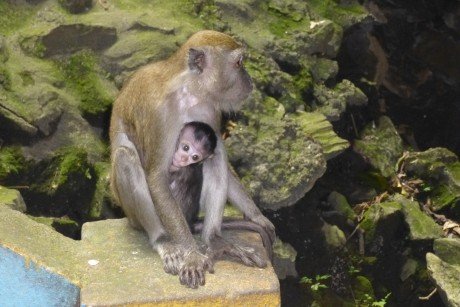 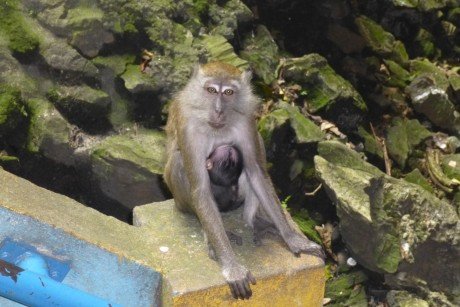 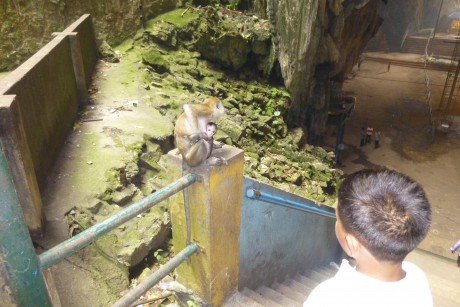 Very interesting place and very recommended. Not for the cave, though, as it is a bit untidy, and the temple itself is kind of small. 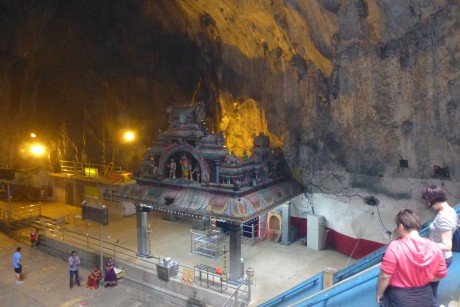 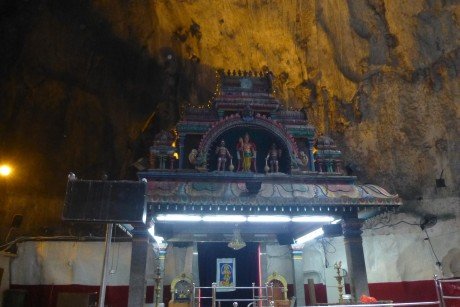 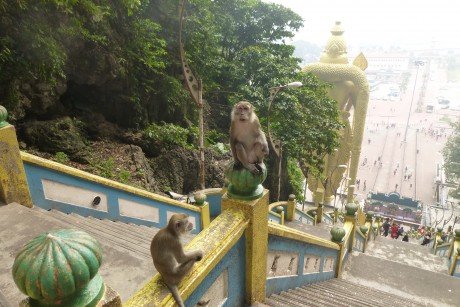 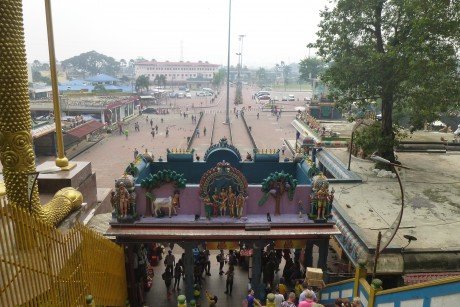 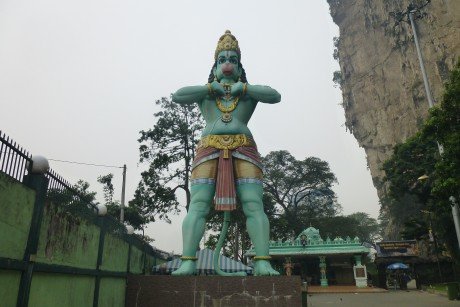 If you like caves, then consider the Dark Cave tour. Or you can climb your way up there, too.

Bukit Melawati Hill is located in Kuala Selengor, about 2 hour drive from Kuala Lumpur. It used to be a fort, and there are still a few cannons and some wall fragments left intact. It’s a nice place with pretty views where you can easily spend a couple hours walking around, but we weren’t there for history—we were there for the monkeys.

There are two kinds of macaques, living on the Hill: the Silver Leaf Monkeys and Long-Tailed Macaques, or as I would classify them, the cute monkeys and just the monkeys. We were advised against feeding regular monkeys, because they are supposedly more aggressive, but we fed them anyway. Because how are you supposed not to, when they are always together? 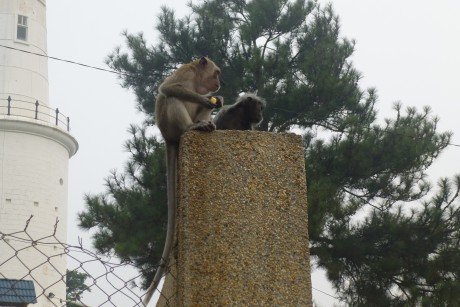 You can buy a bag of food from the local merchants, and it’s cheap. I don’t remember how much, which means really cheap, otherwise I would.

Feeding the monkeys is really fun! Timmy and I had a blast. 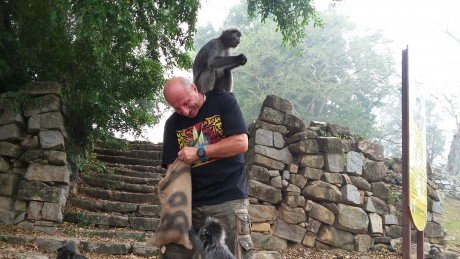 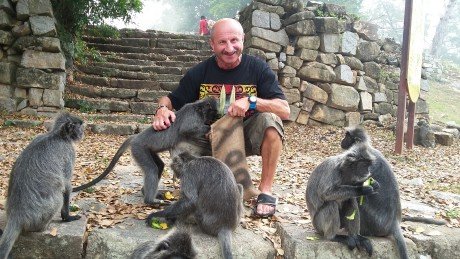 We had the whole place to ourselves for about 40 minutes, when a couple of huge tourist buses arrived. Then it became crowded. 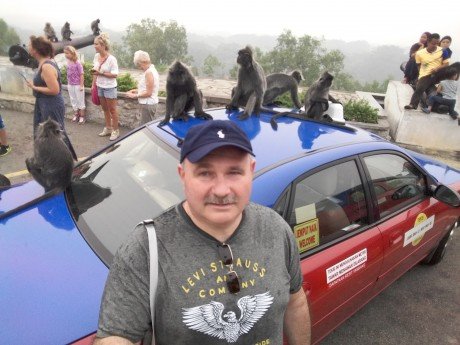 This little fellow thinks he owns the place. 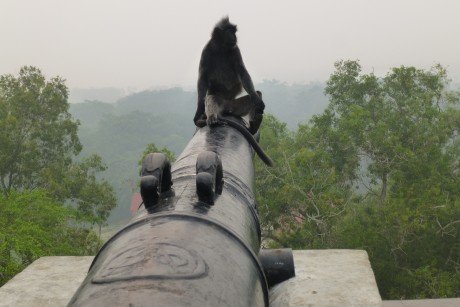 After awhile we got hungry and besides, we had some time to kill before the Fireflies Park would open, so we asked our driver to take us to a nice local restaurant. He didn’t know the area well, but he talked to some local guys and brought us over here. The food was very good except for some dry shrimp that I ordered because they looked good in the picture. The fish and side dishes were excellent and we had some beers with our meal. Our driver didn’t want to eat anything at first, but we convinced him to get something, so he ordered some rice. The total bill came to less than $20, I kid you not. 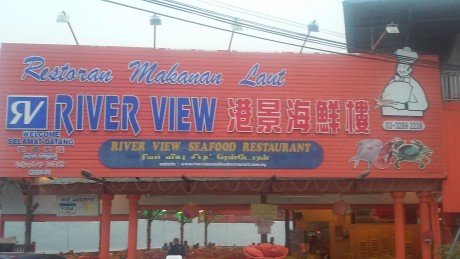 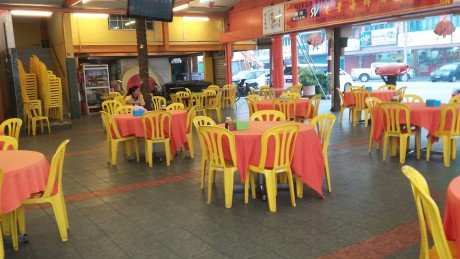 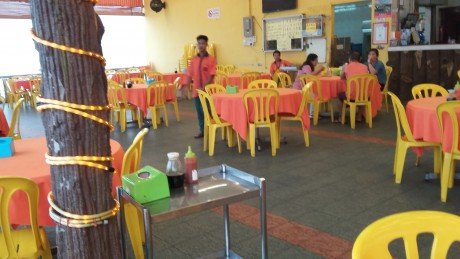 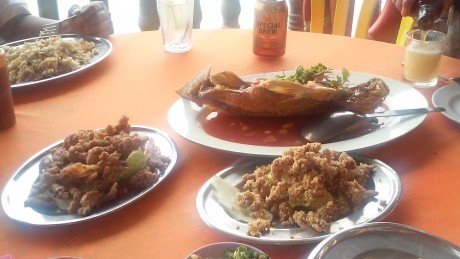 The view was beautiful. Well, it would’ve been if it weren’t for the haze. 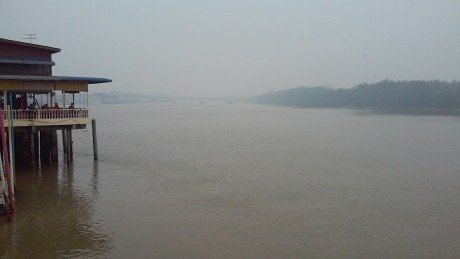 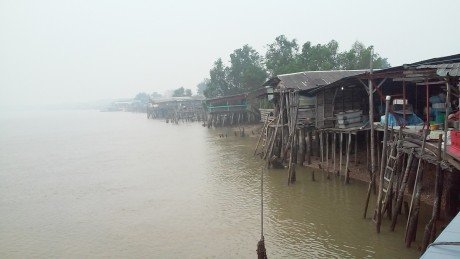 The Firefly Park is also located in Kuala Selangor, probably within 30-40 minutes from the Monkey Hill. Despite taking our sweet time at a restaurant, we still arrived early, and they were closed. They begin boating rides at 8PM. 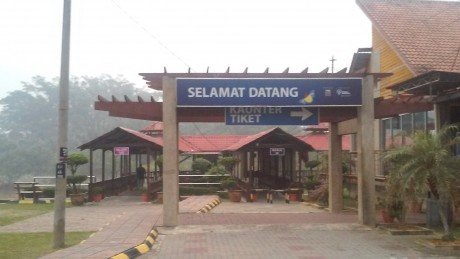 We had to wait for about an hour. Good thing we weren’t all alone. 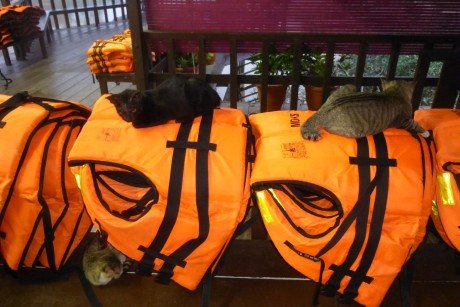 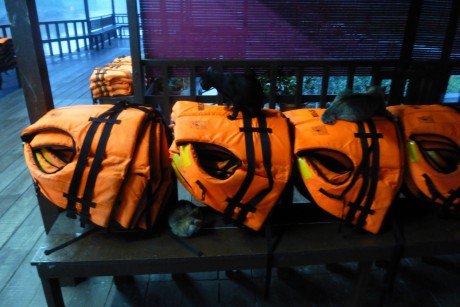 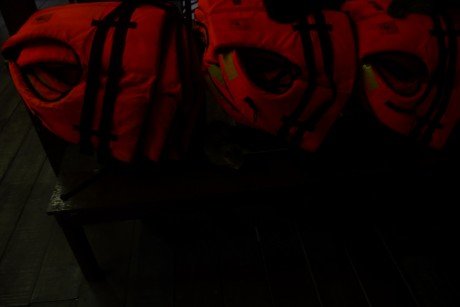 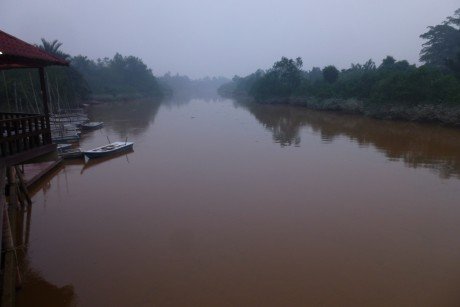 We were the only humans there until 7:40, when a couple of tourist buses arrived. Since we were the first, we got into the first boat, but then the unspeakable happened. Our lack of planning caught up with us.

The moment we got into the boat, it started raining. And not just raining. It was a real tropical downpour. Hard and furious.

The boater handed us a large umbrella. It helped somewhat with the rain, but not the fireflies, as they were nowhere to be seen. We kept gliding for a few more minutes hoping the rain would stop, but it didn’t, so we asked the guy to take us ashore. Umbrella or no umbrella, we’d been drenched. The attendant was very apologetic and kept telling us about the beautiful weather the day before. I have no idea why he believed it would make us feel better.

Lesson learned: plan ahead for your adventures! Especially when the weather is a crucial factor.

Next: Part 6A Welcome to Vietnam

Loved the trip report and the photos, Andy.