ANA awards booking has become much easier after ANA added the ability to search and book flights via multiple zones this winter. It took the guessing out of the process and greatly simplified things.

Is ANA currently the best frequent flyer program for U.S. travelers? I believe it is, even though it’s far from perfect. It just seems to me that every other program is so much further from perfect — that alone makes ANA a clear winner.

UPDATE: Reader Seth alerted me that ANA has paused the ability of redeeming awards on Etihad. Let’s hope it’s temporary.

In my post yesterday, I omitted one very important ANA partner. When you write a 1,500-word, research-intensive post, you do get tired. I am talking about Etihad, of course. Etihad A380 First Apartment keeps trending in the miles-and-points community, and for a good reason. it might be the best first class suite in the sky (except for Etihad Residence). And you can get it cheaper with ANA than Etihad’s own miles — for only 195,000 miles roundtrip.

There is only one problem: getting a first or even business class seat on Etihad from the U.S. It’s a quest like no other, unless you’re ready to go — I don’t know — today! 🙂 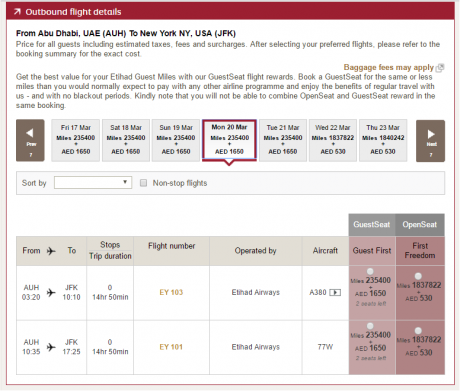 It is, however, much easier to get it on the way back, although you’ll need to plan in advance.

Abu Dhabi–New York: the cost and eligibility shown is for two

ANA levels normally beat American by a mile. Here are the AAdvantage award rates for a round trip flight between the Continental U.S. and the Middle East/Indian subcontinent (Africa is in parenthesis).

Basically, you will pay 35,000 miles more to fly to the Middle East in the Apartment and 45,000 more to Africa, although I don’t think Etihad has first class to Africa.

If you are like me, you’ve already begun your planning. Get to Abu Dhabi or some place in Africa on another carrier and fly back on Etihad. That would be a great plan if it had any chance of working — unfortunately, ANA does not allow you to combine a non-alliance partner with any other partner on the same award ticket. Damn!

Etihad flies between Abu Dhabi and the following U.S. cities: Dallas, LA, New York (JFK), San Francisco, and Washington (Dulles). Since there is no problem finding a First Apartment availability on the way back, try to find a business or first class flight from any U.S. city to get there. Or just get there in coach in anticipation of the ultimate luxury on the way back. 🙂 Etihad does allow you to mix classes, so yes, you will be paying less. See? Silver lining.

If Africa is your final destination, business class availability seems to be wide open between Abu Dhabi and Johannesburg. And you’ll get a free stopover in UAE, too. You’ll just need to brave a coach seat for the outbound 14-hour flight to Abu Dhabi. Come on, you can do that! 🙂 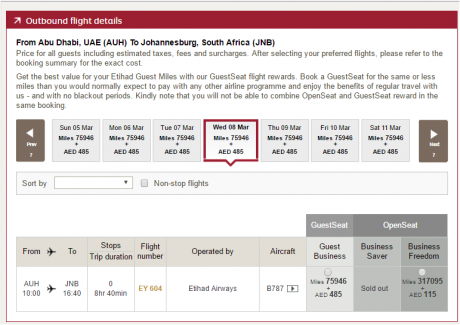 LAX or SFO to Auckland on Air New Zealand 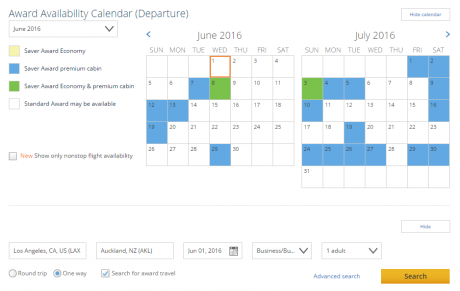 But what makes it truly amazing is the ANA routing rules. Don’t get me wrong; there are some inconvenient restrictions. For example, you can’t fly to Europe via Asia, or Asia via Europe or the Middle East. And there are a few other restrictions that we could do without. 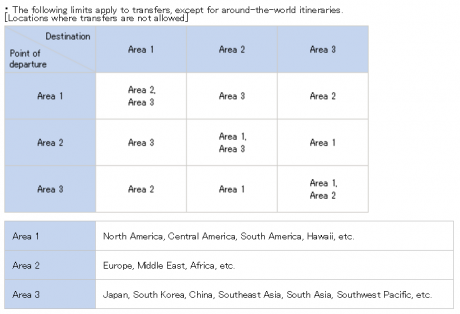 But…! What their rules do allow is flying to Asia via the South Pacific. And this is huge! For basics, check my other post on the topic: Asia Via Australia on an ANA Award Ticket — Unmatched Value!

However, it’s gotten better since then. On April 1, ANA has scrapped fuel surcharges, which has made the following possible. 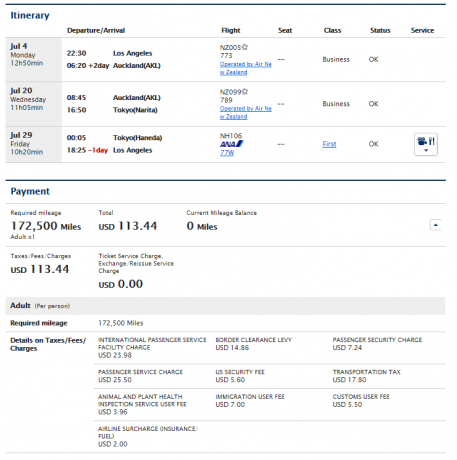 The price is for two legs combined: 60K miles for business and 112.5K for first. If you fly all legs in business, that’s 120K. If you fly everywhere in coach, that’s 75K. And if you want to add Australia too, there is a LAN flight between Auckland and Sydney with your name on it for 7,5K Avios one-way or 15K in a LAN Premium Business cabin!

Note, however, that if you need coach, ANA and United are pretty much a wash, and United also allows you a stopover and two open jaws. The bargain here is for business and first, and it’s the kind of bargain that makes it worthwhile going through the more complicated ANA award booking process.

Thanks for the keen analysis. Have you actually booked an Etihad award using ANA miles? Wondering how the process compares to calling AA for an EY award.

No, but there have been success stories.I would expect it might be more difficult than calling AA in Australia.

Would it be possible to book a IAD-AUH-BOM award on EY using NH miles?