Yesterday, I wrote about the much-needed improvement in the ANA award ticket booking — the ability to search and book awards to multiple zones. It didn’t use to be the case, as all you could do was search and book a ticket to one zone. Anything else — you would have to call ANA.

This development made me remember what Welltraveledmile once said about the possible award that would combine Ocenia and Asia. 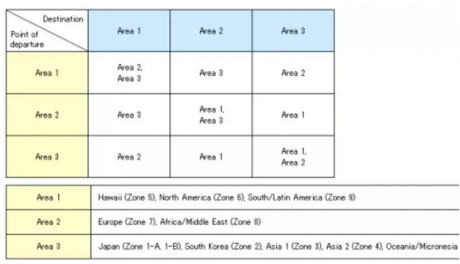 So I did some digging on the improved ANA site, and what do you know — you are indeed!

ANA Routing Rules Allow you to Fly to Asia via Oceania for 75,000 Miles 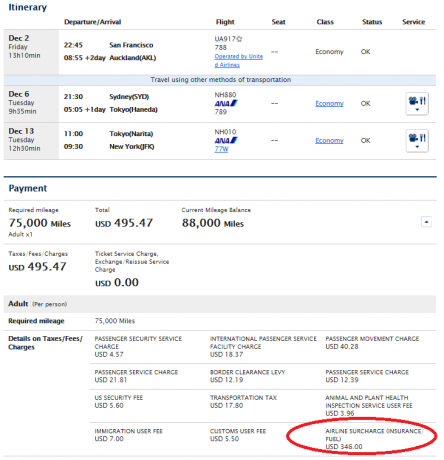 As you can see, you could be able to visit Sydney, Auckland and Tokyo for 75,000 miles — the price of visiting Sydney and Auckland. Of course, you would pay $346 in fuel surcharges, which — if you know me — you know I’m not a fan of. So the first thing I wanted to check was if we could do better. And, indeed we can, if you are as flexible on the destinations as I am. If you don’t mind substituting Tokyo for Hong Kong, you will only pay $112 for the YQ scamcharge, but transiting via Beijing adds about $40 to the taxes.  Still, you’ll save almost $200. 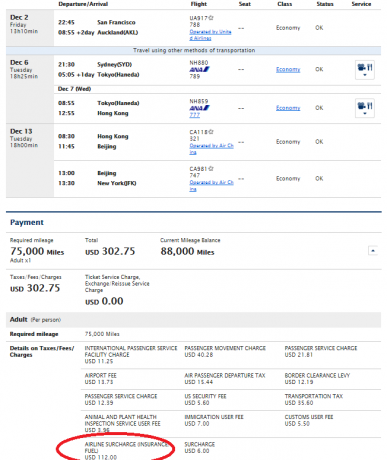 Routing your flight back home via Seoul will shaves $50 off the YQ scamcharge and $40 off the cost of ticket. 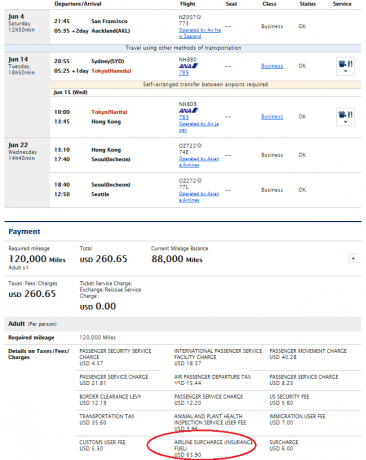 But what you do want to visit Japan from Oceania without paying through your nose?

Well, if you do wish to visit Japan along with Sydney and Auckland, but want to make a stand against bad business practices (and save $375 in the process), you can simply route your flight to Tokyo via Shanghai instead of flying there directly from Auckland. Good bye, YQ! My principles don’t stretch so far, so I would go down that route, only if there wasn’t any non-stop availability. 🙂 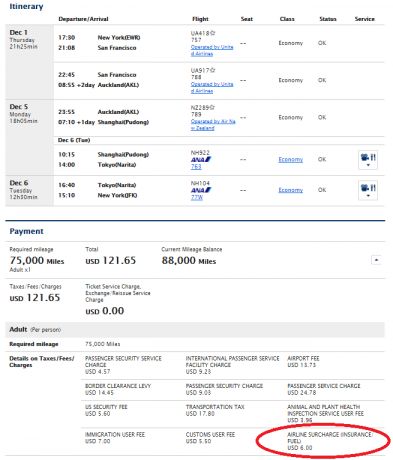 Here is the ANA award chart on partner airlines.

And here are the zones. 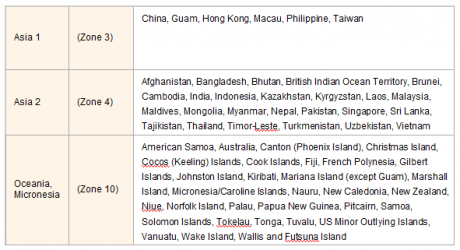 Just look at this beauty! 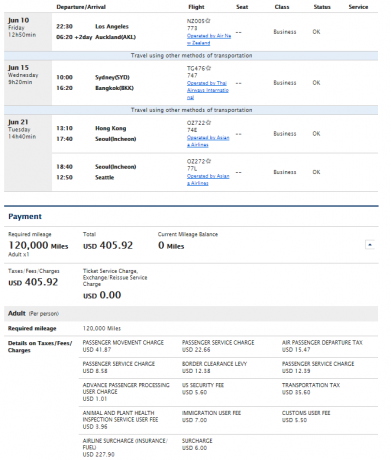 I’m sure you could do slightly better in terms of fuel surcharges if you get to BKK on Asiana rather than Thai, but Thai flies non-stop from Sydney. And I’m sure you could further pimp your ride, adding some exotic routes and what’s not, but this here is the basics.

Just make sure to fly back home from Hong Kong, China, or the Philippines if you want to keep these damn scamcharges to minimum.

Use Avios for Flights in Between

Getting between Auckland and Sydney is easy as pie. This segment is served by LAN on its way to from Santiago. You know what it means, right? Lie-flat seats and international service, that’s what! While it’s just a 4-hour flight, it’s worth 20,000 Avios in business, IMHO, otherwise it’s 10K in economy.

If you are concerned with Air New Zealand business class availability, I feel your pain. But unlike the past, at least there is some now.

In addition, there are more non-stop departure opportunities than LA and more airlines than Air New Zealand that can work for you.

And of course, there are other routing gems that make me believe that ANA Mileage Club might be the best frequent flyer program in the world!

ANA is scheduled to drop fuel surcharges April 1, so this may resolve itself!

Thanks for your comment. I’d drink to that unless it leads to more devaluations.

I have a question. Since Africa is such a HUGE region for ANA, do you think this routing is legal for their set economy miles?

Andy – I misread the chart and had thought Africa and India were in the same zone. What I really meant is, Africa is a huge zone. Am I able to use Etihad and utilize a stopover in JNB then on to somewhere like CAI So let’s say : DFW-AUH-JNB JNB-AUH-CAI CAI-AUH-DFW This would be assuming they let you route through AUH to get to Africa). Essentially what I”m saying is Africa is huge and do they let you roam the continent with a stopover for the same set award mileage? I’m a value traveler, so like to get bang… Read more »

Or Heck, it looks like Zone 4 is huge too. Would there be a way to visit India and with a stopover in Thailand or Malaysia on a single Zone 4 award?

I haven’t though strategically route maps strategically though, to know such a routing. Expanding on my comment above. Being able to visit two unique areas of the world on one award ticket is really an awesome deal

@Andy how about going to BOM/DEL or Dubai in Middle East?

Andy, on your last screen shot, that’s actuall 3 open-jaws, not 2. I’m guessing they allow that many then?