One thing that had infuriated me about the ANA Award Tool was that you couldn’t search for an award if your travel spanned more than one zone.  And well, there are a lot of zones in the ANA Mileage Plan award charts. 8 zones for flights on ANA metal and 10 for flights on partners.

That alone used to be a huge obstacle to book that bad-ass award trip we (or at least I) always crave, maximizing the value and minimizing the expense as I outlined almost a year ago. Your search would error out when you tried to stitch 2 or more zones together. 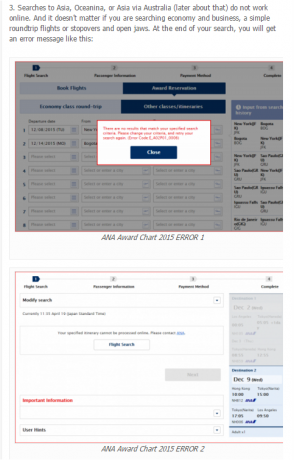 I don’t know exactly when it happened, but last time I checked it was January, and it would still give me an error I had described in my 2015 review of the ANA mileage changes.

Oh,  don’t get me wrong.  The ANA search engine is still awful — nothing like it used to be before the much unneeded “enhancement”,  but at least right now they are letting us search different zones. It wasn’t the case when they just  released the new tool that was only good for one zone.  In other words,  you could search only for flights to Japan,  or only to Oceania,  or only to South East Asia, or only to Europe. This is not the case anymore.

And this is huge because…

I will delve much deeper into the new ANA Award Tool opportunities in the coming days. Suffice it to say, I’ve been able to test quite a few yummy ITINs – some of them have panned out spectacularly, others have fluked, but for now, take a look at this classic. 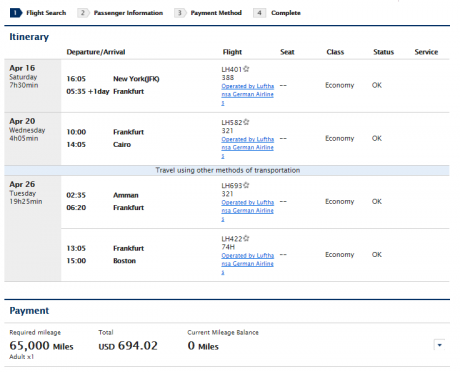 No, I don’t suggest wasting almost $500 on fuel surcharges – it’s just to illustrate what kind of ITINs you can build with the ANA Award Tool now.

Quite honestly, I had no idea you could backtrack with ANA. If anything I thought I’d read their rules carefully and thought you couldn’t. Either I got it wrong, or this is an interesting loophole. Any ideas?

Here is the link to the [relatively] new ANA Award Tool (just click Award Booking and log in to play with it). Honestly, it makes me sad that I’ve totally depleted my ANA miles recently (sigh).

Stay tuned for some fantastic redemption values opportunities you may not have known about.

Christian, I aim to please. 🙂 http://lazytravelers.net/asia-via-australia-on-an-ana-award-ticket-unmatched-value/