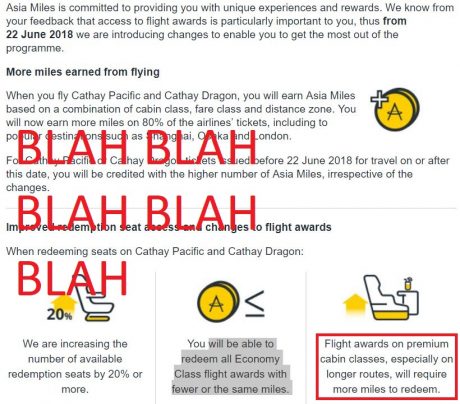 OK, here it is. Another airline’s “enhancement” is upon us.

Of course, North America, as always, is being targeted. Cathay Pacific has found a sneaky way to introduce their “enhancements.” The current Asia Miles award charts charges more than 50% rate for one way redemption, so a Business Class seat between New York (as well as Washington, DC, Boston and Chicago) and Hong Kong costs 85,000 miles for a one way and 145,000 for round trip. Starting June 22, the one way rate will remain, but the round trip will be 170,000 miles, twice the cost of a one way ticket. That’s a 17% price increase.

Let’s move on to Economy. Cathay claims “we will be able to redeem all Economy Class flight awards with fewer or the same miles.” From what I can see, this is not always the case. In some cases (HKG — SIN, for example), they do reduce both one way and round trip from 20,000 to 10,000 and from 30,000 to 20,000 miles, while in others, they only reduce the one way rates, living round trip levels intact.

Now, Cathay Pacific can brag how it’s charging 50% for one way travel. Sure, just raise the cost of a round trip, and you’re golden.

It’s too early to say if there are any sweet spots in this devaluation.

I didn’t find anything regarding the oneworld chart. Hopefully, they will keep it intact for some time. Or perhaps because it’s too late/too early, and I could use some sleep.

Here are the Asia Miles charts before and after the Cathay Pacific Devaluation.

As you can see, they’re removing the last 10,001+ band. so here you go — this is your sweet spot. Fly the living hell out of them for [almost] the same points.

Please, bloggers, let’s make a deal. Anyone who says AGAIN that “it could’ve been worse,” I’ll punch you in the nose.

You are hilariously funny 😆 maybe you SHOULD go to sleep lol

Thank you, I slept. Decided not to punch people in the nose.
They do, however, know who they are.

Yeah, really too much with this “could be worse” stuff.

They do have the oneworld multi-carrier chart, which has horrible hits in business and especially first for the 4000-25000 mile buckets.

They haven’t made clear what happen for 1 partner or Cathay+1 partner awards, since the Standard Award chart makes repeatedly clear its only for Cathay & Dragon.

Exactly! Every time a drastic devaluation occurs, you hear all this “it’s not so bad” drivel. Of course, there is not much we can do about it, but calling it what it is shouldn’t be too hard.

And yeah, I didn’t notice that the new standard chart doesn’t mention mixed rewards. They might’ve nixed it.

Many of the “It’s not so bad” crowd are bloggers with credit card affiliate links. If they call it honestly and say just how truly bad this sucks, then they’ll likely sell less credit cards. That’s my read on the situation, anyway.

It’s not just that. It’s that burning desire to maintain a “positive outlook” on things, which is annoying as hell. I mean, I happen to be a wide eyed optimist too, but a spade is a spade.