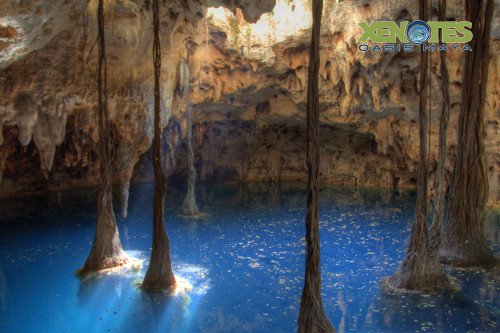 Disclosure: this was a free tour organized for TBEX bloggers by Xenotes Oasis Maya, the subdivision of Experiencias Xcaret.

Another Disclosure: This Is a Really Long Post. You’ve been warned!

Just so you know, I didn’t go to TBEX (Travel Blogger Exchange Conference) in Cancun to have fun. It was a business trip, you know. People call it a dirty job that someone’s gotta do. I worked my ass off down there. OMG, I worked so hard! So much work, so little sleep…

Just so you know, I managed to write the above paragraph with a totally straight face. Yep, I’m that good!

This Xenotes Oasis Maya tour was a huge highlight of my trip. It was raining on  and off for the duration of the tour, but it didn’t matter. Didn’t matter at all!

Xenotes, (or zenotes, or cenotes, spell it any which way you want) are mysterious sinkholes that are unique, at least in numbers, to the Yucatan Peninsula. Their significance for Maya civilization is hard to overstate; in fact, most Mayan villages were built around or near a xenote. Mayans revered xenotes not only as a vital source of water supply, but also as a sacred ceremonial religious place. But I didn’t write this post for educational purposes. The thing is that I’m a huge sucker for caves!

I love caves. If there is a cave somewhere near where I travel, I have to visit, even if that’s a long drive. There are some beautiful caves in Pennsylvania as well as the Catskills in upstate New York. And there are xenotes in other parts of the world like New Mexico in the US and even in Australia. But in the Yucatan there are dozens of them, and I got to explore four. What a thrill!

Of course, only after I took the tour, I realized that I had a complete misconception of what xenotes were, because many of them have nothing to do with caves. Well, another myth in my head is busted.

When I registered for the TBEX conference in Cancun, we had a choice of some activities, organized by the Xcaret group. Xcaret is a company that is well-known for a huge park offering plenty of different things and experiences, but when I saw xenotes on the menu, I stopped looking. Check!

Now, I don’t call myself Lazy Traveler for nothing. I really didn’t pay attention. Did I check the tour description? Nope. Did I check what people had written in Trip Advisor reviews? Nope again. My mind pictured a leisurely stroll down the stairs and into the caves where I would (also leisurely) swim around and enjoy the coolness of the water and maybe a few stalactites or stalagmites and stuff like that. The reality was completely different.

“Some people complain the water is cold. It is not cold. It’s freezing,” said Carlos, our driver, and also our guide and security expert, while we were rolling down the Ruta de Los Cenotes—the Neverland of cell phone signals.

By the way, that was no joke! I mean the signal, not the water–the water was fine! Make your important calls before you turn onto La Ruta de Cenotes, because after you do—well, serenity! Whether you like it or not!

Then Carlos said something else that sent me straight into the panic mode.

“Is anyone scared of heights,” he asked. And in response to a few hands raised up that included my own—“too bad, you’re already here. You will zipline, rappel, and jump. It’ll be fun.”

Fun? Last time I jumped off something was a quarter of a century ago in Crimea. I wouldn’t have—but our ferry lost an engine somewhere in the Black Sea. Luckily, that happened near the shore, so the choice was either to spend the night on that stupid commuter ferry waiting for a rescue ship, or swim a few hundred feet and keep partying. I remember that jumping was scary back then, but it was also a no-brainer.

Fast-forward to yesterday. When I read a few reviews of this tour on Trip Advisor (right before writing this article), I found this:

“The one thing I would say is if you have a fear of heights or are of a nervous disposition then this tour probably isn’t the best.“

Well, tell you what. Nervous or no nervous—do the tour and you will have a blast! I promise.

There are four xenotes representing the four elements of nature in this tour. You might encounter them in a different order, but here is my experience. 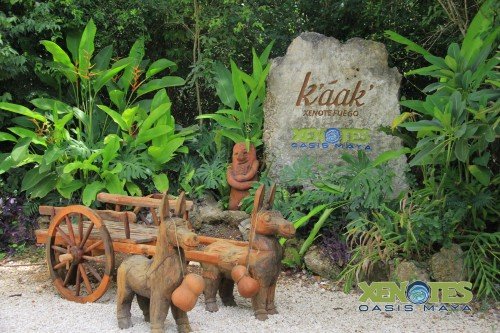 It’s an open xenote. You zipline off the cliff and jump into the water. I had hurt my left arm in Thailand this winter and that gave me some extra worries that I wouldn’t be able to hold on to the bar, but I did fine. Here is my chubby self, doing the deed. The mask of pure horror on my face is an accurate representation of what I felt in the first couple of seconds after losing ground under my feet. Then the fear yielded—to exhilaration! But there is no photo for you to see that. Damn! 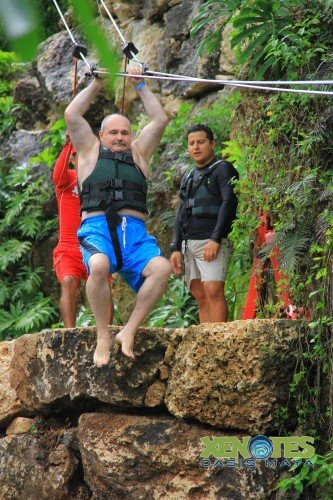 Then you swim for a while to the other end of the xenote until you get to the stairs and climb up. 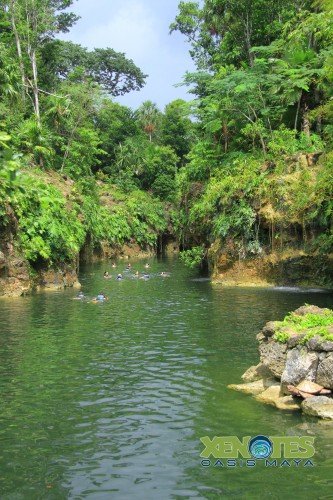 This is the cliff where you are supposed to face and stare down your demons. Think I could be even more dramatic? LOL! Here is a photo of some beautiful people for a change. Enjoy! 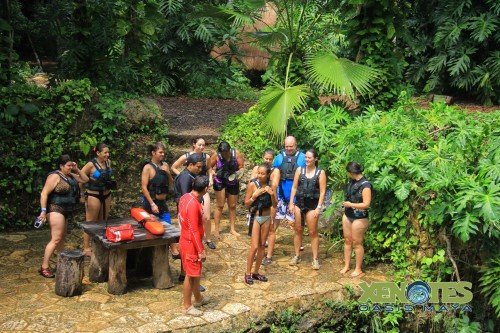 The thing about jumping off the cliff is that you know it’s perfectly safe. You know that! You’re wearing a life jacket, for Christ’s sake! What’s the worst that could happen, right? You know that your fear is ridiculous! And yet, I got to the edge twice and then stepped back—also twice. Up until one of the guides said something to the tune of “come on, dude, you’re a man”.

“Nice of you to say that in front of the women,” I noted.

“So do you have enough motivation now, Andy,” laughed one of my female teammates.

That did it! There is only so much a guy can take! 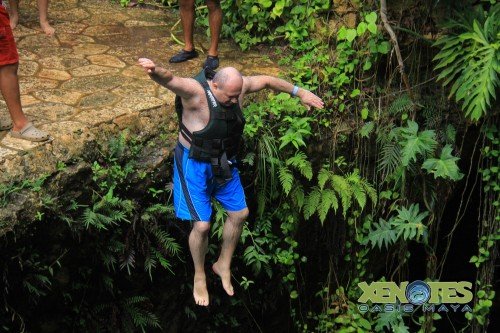 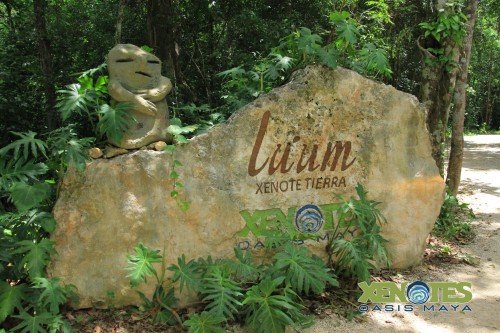 This xenote was my favorite. First, it was half-closed, the closest to the cave formation that I love. You rappel down into the open part and then swim into the cave. 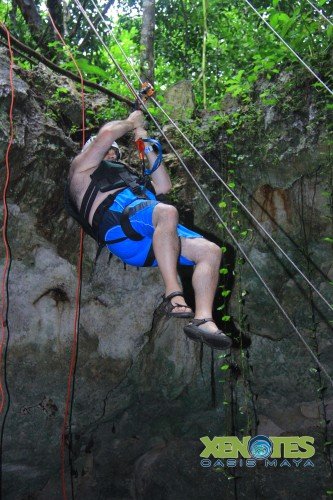 Inside, it was everything I wanted it to be. Compare these two pics. The first stunning photo caught the cave part on a sunny day, 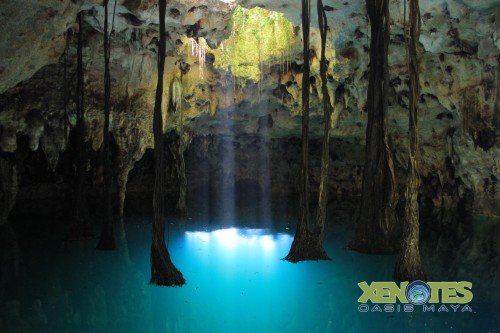 But this is not what we saw. Here is the same cave, dark and mysterious, but it looked every bit as beautiful to me. This photo doesn’t do it justice. 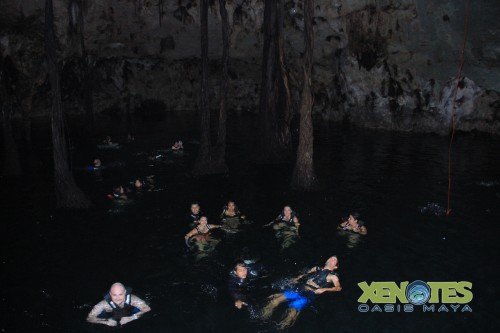 The cave had a cliff of its own, and since I’m a firm believer in learning via repetition. I jumped again. And then again from a higher stone. Not that it was any less scary than the first time around, but I felt more comfortable. If you don’t get completely paralyzed by fear first time around, do it again, and it will get easier. 🙂 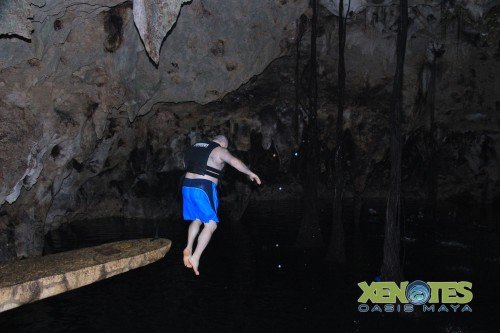 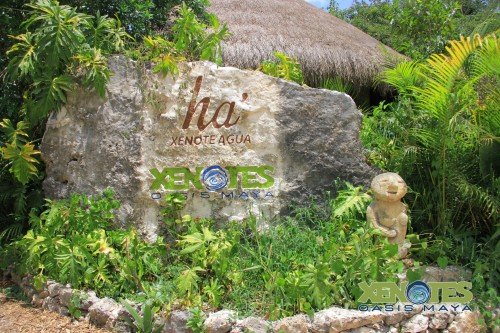 This xenote is the most peaceful of them all. You climb down the stairs into the water and snorkel. 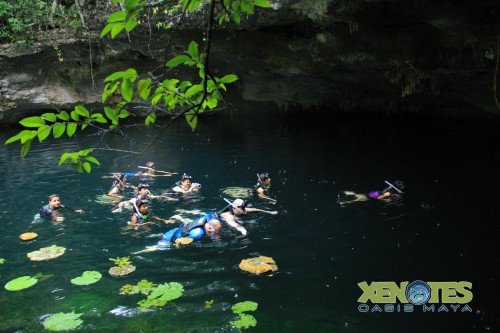 I didn’t see a lot of wild life, except for two sphinx-like red frogs, but Carlos found this little guy. 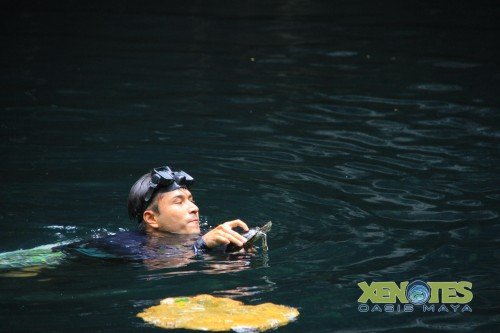 Then you swim and walk through some narrow passages into another part of the xenote and start paddling, just like that! 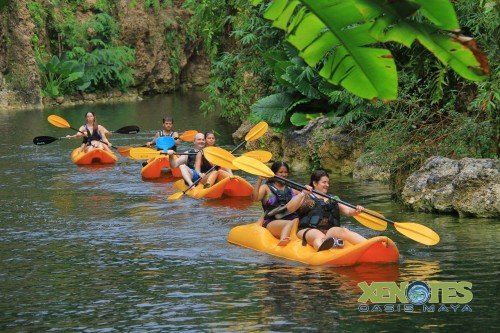 Becky (The Girl and Globe) and I made a great team—Becky did all the muscle work while I was slacking behind (shh, don’t tell her). 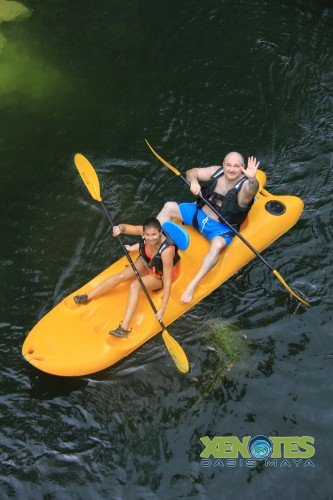 After the third xenote, we had a little lunch (and they also served coffee, hot chocolate and snacks at every xenote). During lunch, the rain turned from a drizzle into a torrential downpour, but that didn’t stop us. 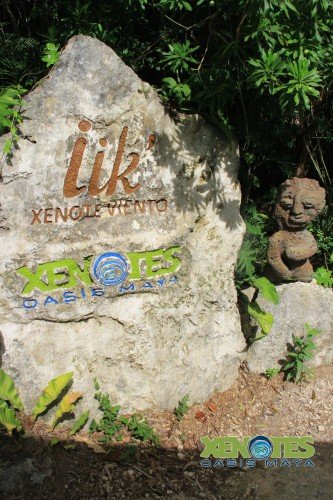 This xenote has two ziplining options: the seat and the bar. The swing-like seat is an easy one, and you don’t have to jump, as it will slide you all the way down into the water. 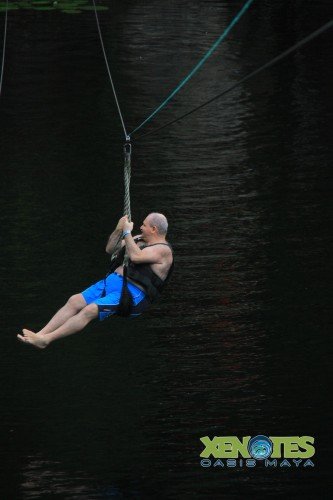 The bar is like the zipline in K’áak’, zip and jump or wait till you’re in the water, nothing easier. 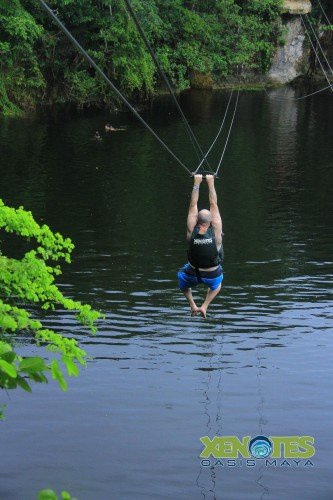 This is a permission-to-enter ceremony that we performed at every xenote. For whatever reason, it was fun and didn’t feel lame. 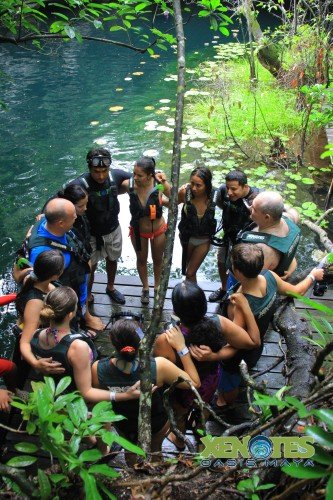 And then–back to the bus. 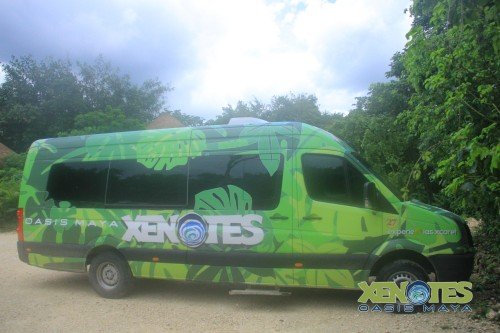 It was a fantastic tour and the major highlight of my trip to Cancun. This tour is also a great introduction to the xenotes for everyone, except perhaps jaded adrenaline junkies or–at the other end of the spectrum–folks with even more troublesome “nervous disposition” than me. I was absolutely thrilled, and I wouldn’t hesitate to do it again (and will).

Could it be that my little review is colored by the free nature of the tour? Well, if you think so, then no harm done! You don’t get 500+ positive reviews by providing lousy service. We were taken a good care of at every point; the safety measures were top-notch; everyone we met was extremely friendly; and I have absolutely no reason to believe that regular tourists are treated any worse than we were! When I review things, I usually write about the pros and cons, because there are usually pros and cons to everything. However, I can’t—seriously—can’t put my finger on anything that I would consider a con in this operation. Here are a few small logistical tips for those who don’t like doing research—to make this tour even smoother.

I met many new friends on this trip, too. Special shout outs to Debby from Traveling Well for Less. She was the most fearless of us all (read her post about this trip here); ex mile-and-point connoisseur Cindy, who runs Points and Travel; David and his beautiful wife Natalia who run a popular Canadian travel podcast Travel in 10; Tanya from Global Souls; Claudia of @claudiaanchondo, Mariel from Mariel d’ Viaje, and of course, my skillful rowing mate Becky from The Girl and Globe. 🙂

And huge thanks to Sergio, Miguel, Carlos, and Freddy from Experiencias Xcaret for organizing this tour, as well as your guidance and humor. You guys made this trip as memorable as the xenotes themselves!

[…] My Cancun Tour of Xenotes – The Lazy Travelers Handbook […]