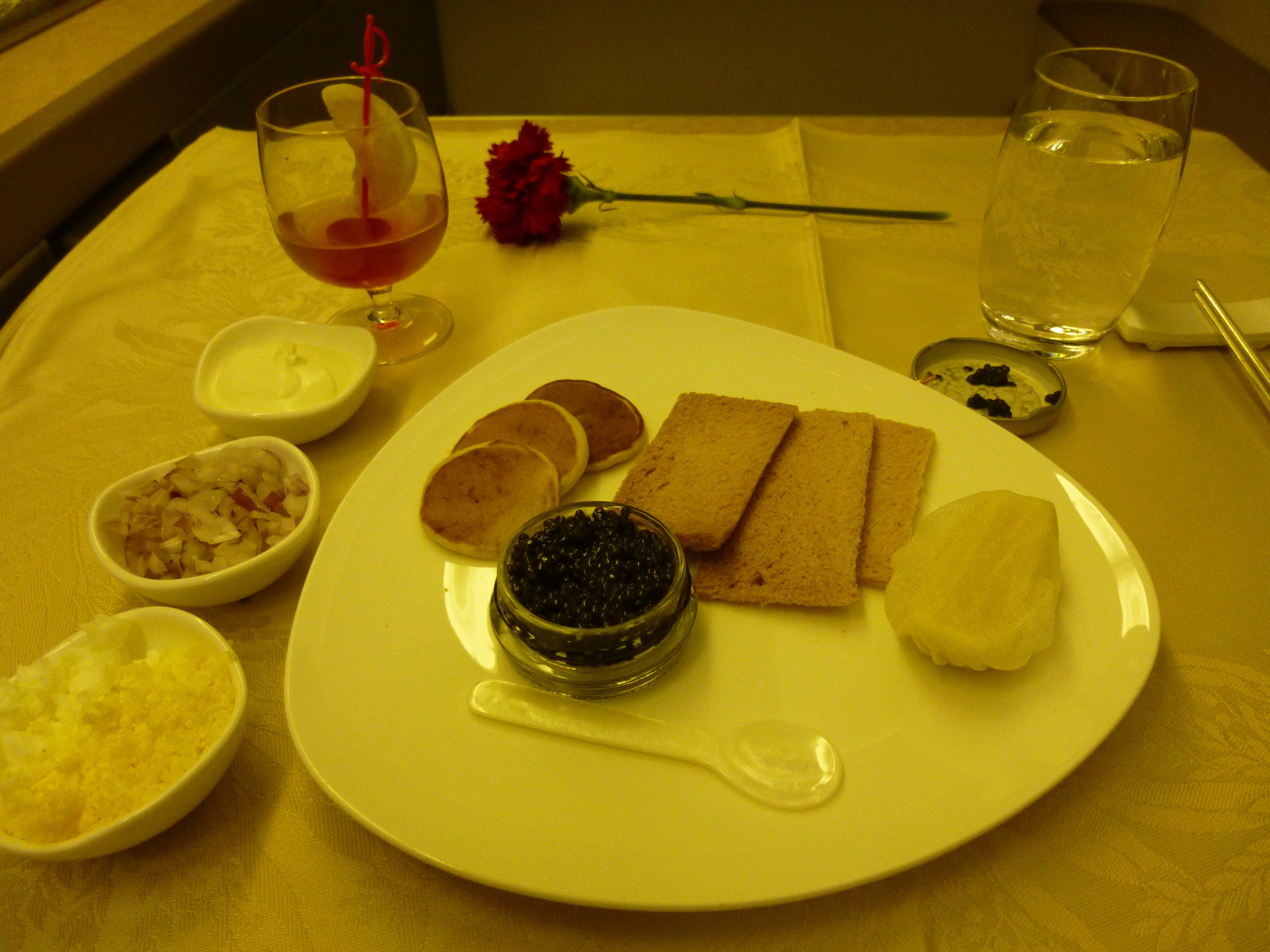 As several bloggers have alerted us, American Airlines food cuts are going to be permanent. The carrier is going to replace their disconnected full meal service in First Class with something “more modern.”

This is bad, right?

I don’t know. Short and medium hauls — I seriously don’t care. As long as they give me a glass of water, I’m perfectly capable of BMOS (Bringing My Own Sandwich). Long hauls? I guess I need them to give me something, but I don’t need it to be an elaborate gourmet meal. Here is the list of the most important features I personally value on long and ultra-long hauls. See if you agree or not.

Am I strange and different? Or is it reasonable to value the hard product more than anything, and I really mean ANYTHING else?

I wrote a little rap song a few years ago. Never published it before, because, well, this is not that kind of blog. 🙂 But the latest events have nudged me to dig it out. Here it is slightly revised after all these years.

I’m riding in the middle of a 10-abreast,
Can’t help but feel a little bit unduly stressed.
I’m squeezed between a couple of dinosaurs
Hard tempered in the art of elbow wars.

The dude in front reclined – oh man, that’s cold!
I’d love to do the same, but I’m not that bold.
I want to go pee but there is a line,
That, and I’m jammed by those seatmates of mine.

I’ve heard that there are some better ways
To ride the Airlines and Airways.
It’s magical unlike this coach (which is vile),
And every pax has access to an aisle.

The cabin crew are totally on top of their game,
And everyone, it seems, does know your name,
The food is served on china and it’s delish.
The booze – oh man, you’ll drink and feel like a fish!

But hey, forget the food, and the booze, and stuff,
Can get them on the ground – it’s not that tough,
Yeah, it’s cool to enjoy these marvelous treats,
But nothing matters more in the sky than seats!

And baby, those are huge – no curling up!
There’s no space or dignity to give up.
You can recline away anytime with ease,
Up to the full one hundred eighty degrees!

One Eighty, One Eighty,
Who can I f— to become your matey?
One
Hundred
Eighty degrees,
Sounds like heaven – gimme, please!

After reading about the American food devaluation I immediately remembered Elaine sneaking into First in Seinfeld – domestic First, that is.

Poor Elaine had the presence of mind to utter, “No, nothing for me, thanks.” She wasn’t there for food or booze; she was there for the refuge from the madness of cattle class (although she did try to steal a cookie, didn’t she?).

That’s my kind of attitude. No, I don’t “sneak” into a First Class seat, but I tend to avoid interactions with flight attendants unless there is something I can’t do without their assistance. I just want to stay in my seat and relax. And as long as I’m not hungry, I would be perfectly fine with a “modernized” food service, whatever that is.

While I’ve been playing the miles and points game for roughly 2 decades, my first international Business Class “experience” was only in 2011 or 2012, I think. It was a LAN flight from New York to Lima. The EFE wasn’t working, the food wasn’t at all spectacular, but I in heaven! I was lying on a flat bed! On an airplane. At 40,000 feet. It was exciting, to say the least.

The novelty has rubbed off since then, but I’ll never forget to appreciate the ability to stretch out on a flatbed seat in a metal tube. That’s the Holy Grail of long hauls. Nothing else comes even close in my very humble opinion.

But of course it is! All their “enhancements” are just that (well, almost). The difference is that in these days they don’t have a choice.

Don’t you think American (and other airlines) simply must look into any money-saving opportunities after losing 90% of their business to the COVID-19 pandemic?

And yes, I know why you’re worried. American Airlines food cuts can be copied by others. You’re worried because this is a slippery slope. That’s a totally legit concern.

American is a pioneer in all things draconian. It was American that first imposed checked baggage fees in summer of 2008. Then United and US Airways quickly copied the move, which has been followed by almost all other airlines. And the rest is history.

So yes, the likelihood that those sumptuous meals in First and Business will soon become obsolete is high. Well, maybe with a few exceptions.

But guess what – I’m perfectly fine with that, and you should be too.

Let airlines save a few coins after the monumental pandemic losses they have been suffering. Let them remove the excesses. I can do without full dining service. I can do without Dom, Krug, Salon, and caviar. And I certainly can live without Hennessy Paradis.

Let them cut down on the food and the booze and reduce their onboard service to the bare minimum if it helps preserve what really matters: lie-flat hard product and frequent flyer schemes.

Although, I must say, clean lavatories are mighty important too.

You see, food might be the least of our problems. What I’m really scared of is that airlines might not be in the mood for giving away award premium class seats after the COVID-19 pandemic is over.

Seriously, who or what would stop them? The outrage from their loyal customers? Ha!

For one thing, the vast majority of Americans travel within America (Source), and most of them redeem miles for Economy seats. I do too on most domestic flights: 3-6 hours in coach is bearable. Domestic travelers won’t revolt.

But 93 billion is still a huge number, right? Right, until you consider our most favorite destinations abroad (Source):

So even internationally ~68% of Americans travel within the same 3-6 hour boundaries, and only 32% of international travelers fly long and ultra-long hauls, and yet — the vast majority of even those long-haulers are fine with coach seats (no matter how much they complain).

So how important is it to airlines to keep the rest of the flying public happy? Not too important, I’m afraid.

They can – and do – sell those seats

Very few people buy super-pricey First and Business Class seats outright even if they can afford it, but we saw plenty of incredible Business Class cash deals last year, well before the pandemic. If this trend (when airlines lower their fares to more or less reasonable levels) continues, there might be enough takers to fill the seats. A couple of my acquaintances who still fly in Economy despite their high 6-figure incomes told me that with fares no more than twice over Economy, they would fly Business Class exclusively.

The post-pandemic landscape of award flying can be so unpredictably different from what we’re used to that I wouldn’t sweat the loss of upscale dining in First and Business Classes. When your boat is leaking you want to encourage the captain to plug as many holes as possible before they start throwing people overboard.

What are your thoughts about American Airlines food cuts? Pissed, don’t care, or is it the right thing to do?