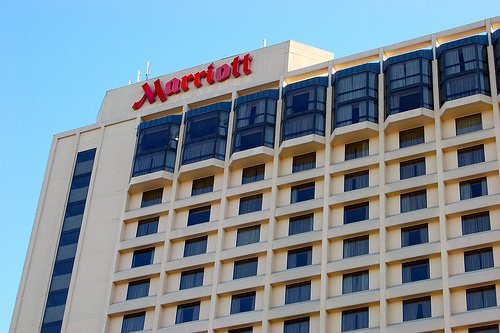 People tend to divide others into two groups, pessimists and optimists. You know, those who see the glass half-empty and those who see it half-full. I’m neither. I usually wait with a great patience until the glass gets drained, and then I happily smash it against the wall. I don’t think that’s classifiable. Or certifiable if you will.

Well, the thing is that with loyalty programs, this has yet to happen. There is not a single devaluation yet that would render a loyalty program completely useless.

Hasn’t happened to United and even Delta, although the latter is still on the ledge.

And I’m happy (or unhappy, because I’m still devoid of the pleasure of smashing that glass) to report that it hasn’t happened to Marriott, either.

Does it mean the devaluation wasn’t that bad? Oh, it’s bad, don’t make any mistake about it! It’s really bad, especially that this is the second drastic devaluation in the row.

This is what happened, according to Reward-Insiders Marriott board:

How many hotels are affected?

Here is the Full PDF List of the Changes.

Note, that the cities or countries of the respected hotels are not listed; apparently it is our duty to remember all of them by name. Rick from Loyalty Traveler is perplexed that the “company like Marriott Rewards publishes a list of hotel category changes containing over 1,000 hotels with no geographical location information for city, state and country.”

I’m not. Marriott is not the only one – Hilton, for example, doesn’t care either. Why make your own employees to provide accurate descriptions when there is an army of “freeloaders” that will decipher it for free? That’s just savvy business practices, that’s all. 🙁

Can you hear that squishing sound of the air coming out of your Chase Marriott credit card? The Marriott holders currently have access to one Category 1-4 hotel night in the first year, and one Category 1-5 night every year after that. With this devaluation, especially after the last-year’s massacre, things have become much less peachy (not that they were overly peachy to begin with). If you are still considering taking $89 out of your pocket to renew this card… well, stop considering it. It’s just whack now.

But, can I still recommend applying for this card with 70,000-point bonus? Absolutely, especially if you can apply with a partner (spartner as I call your significant other). That is if you are not a fancy-pants who believes that a non 5-star hotel is not even worth considering. Interestingly enough, there are so many folks in our hobby who have this exact attitude. Having said that, I’ve been amazed to find out that some very luxurious properties have found their way into a lower category, although many (but not all) of them are located in odd places.

And this brings us to another point I’m trying to make. Marriott is still going to work for us. The word loyalty is a misnomer, even though there are a lot of folks who take it seriously. Loyalty programs work best for the disloyal, and for a simple reason: they aren’t loyal to us, and it works wonders for them. Why should we treat it any differently?

Devaluation or not, you will always get ahead with Marriott Rewards and every other loyalty program out there if you can exploit the good and avoid the bad. Be flexible and alternate your travel plans between different programs. It’s really that easy!

What makes and will make Marriott work great for couples is their saving grace: they allow you to combine points with a spartner in order to make a reservation. Few hotel chains allow that.

Also, contrary to previous rumors, you will still be able to redeem five nights for the price of four, and that can bring many properties to the level I consider the very Gold Standard of redemption values, 5,000 points per night!

What it means is, you can still have a hell of a vacation between the two of you even after April 15th, when the devaluation goes into effect. If this is your first year as card holders, and you don’t mind staying at a Cat. 1-4 property, you can add two free extra days to your reservation making it a one-week stay with another 60,000 points to spare.

And there is another silver lining in this latest Marriott shenanigan, which has gone almost unnoticed. 22% of the hotels are actually decreasing by a category, and believe it or not, they have some very interesting properties in that list that you might want to consider.

I compiled a few examples of the most interesting decreases below. However, keep in mind the following. For one thing, value as well as beauty is in the eye of the beholder. For another, I’m heavily biased toward international travel, and it might cloud my judgment, sometimes.

Here are a few examples of interesting decreases from 5th to 4th category that allow you to use your free nights during the first year of Chase Marriott card membership either separately or by adding them to your point stay. Note, that every single hotel on this list has at least 4-star reviews on Trip Advisor at the time of writing.

Here are the most interesting decreases from 4th to 3rd category that allow you to use your free nights during the first year of Chase Marriott card membership either separately or by adding them to your point stay. Note, that every single hotel on this list has at least 4-star reviews on Trip Advisor at the time of writing.

The following is the list of most interesting decreases from 3rd to 2nd category that allow you to use your free nights during the first year of Chase Marriott card membership either separately or by adding them to your point stay. However, at this redemption level you should consider using the points, because you can do much better with your 1-4 Cat. Free Night Certificate.

Note, that every single hotel on this list has at least 4-star reviews on Trip Advisor at the time of writing unless stated otherwise.

The following properties are listed as 4.5 or 5-star hotels that appear to be exceptional values.

The following Cat 2 properties are listed as 4.5 or 5-star hotels and can be fantastic values if you’re in the neighborhood…

And now for something completely different (well, not really). Here is the list of newly-minted interesting Category 1 properties, yours for only 7,500 points a night or 30,000 for 5 nights. Don’t even think of using your Free Certificates to buy an extra night at any of these hotels. Use the points or cash only.

The above are just a few examples; there are many more. And there are also a lot of Residence Inns, Courtyards, SpringHills and other Marriott hotels in the US that have been demoted. So let’s do what we do best and try to adjust. We’ll do just fine!

Filed Under: Miles and Points
← Airlines are slipping us a roofie again
A Few Afterthoughts for the New Marriott Changes 2014 →
0 0 votes
Article Rating
Subscribe
Login