Airlines are slipping us a roofie again 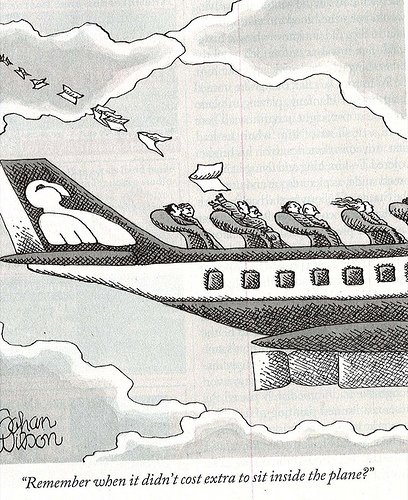 Isn’t it funny that every time a big corporation loses a battle in their never-ending war against consumers, they immediately roll up their sleeves and start grinding at it again? Never give up, do they?

The ink hasn’t even dried on the DOT’s ruling mandating the airlines to display a full ticket price to the consumer, and the lobbyists are up in the arms again. In 2011, they already tried to sue the government for limiting their “freedom of speech”. Of course, by freedom of speech, they understand the freedom to reel customers in with a supposedly low fare — only to ambush them with the taxes and exorbitant fees in the final screen.

A new, so called Transparent Airfares Act of 2014 has been introduced in Congress this month that would allow the airlines to advertise “full breakdown of their ticket costs, thereby removing the often misplaced blame that airlines receive regarding airfare increases,” says ALPA, the Airline Pilots Association.

At first glance, the lobbyists might have a point. Here is what A4A (Airlines for America, the industry trade group) representative told Chris Eliott when he advised them that consumers were quite happy with the current DOT regulations.

“This isn’t about customer complaints,” A4A spokeswoman Jean Medina said. “It’s about transparency and truth in advertising by showing the actual fare and then the taxes the customer is paying. On its face, full-fare advertising sounds as though it is protecting the consumer, when in reality it is protecting the government, enabling spikes in taxes to be hidden and buried within the price of a ticket. We believe that customers should know where their travel dollars are going.”

In order to explain illiterate consumers how important it is to unbundle the price of a ticket, ALPA has come up with this neat graphics. 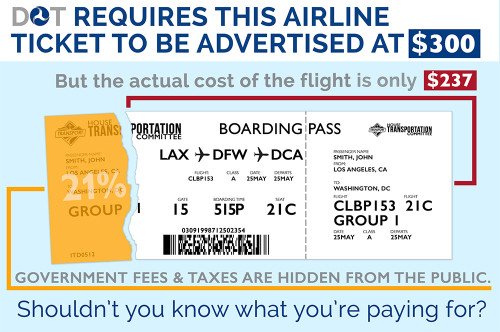 So airlines appear to be concerned that the passenger can’t see the whole picture, and that they, the airlines, get a bad rep for the taxes and fees imposed by the government. OK, fair enough.

There is one problem, though. No one, including the bad, evil government, prevents airlines from breaking down the full fare for everyone to see. That’s not a problem at all! For some reason, though, I don’t see the queue to disclose those fabulous fuel surcharges, oh my!

Let me offer my own visual aid here.

This is the screen with the full price of the ticket. 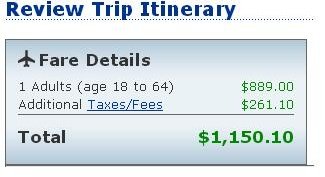 And this is their coveted breakdown: 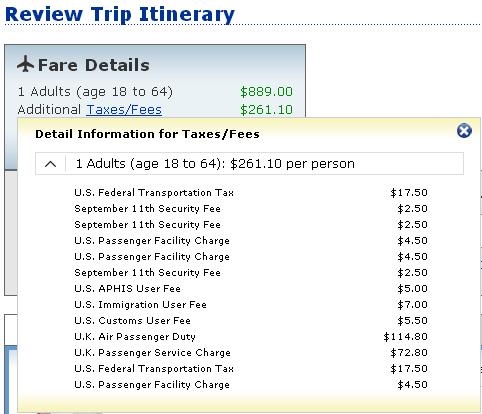 So once again, who prevents them from breaking down whatever they want? And while they’re at it, may I suggest starting with their beloved fuel surcharges — so beloved, in fact, that they had to invent two separate codes for the same thing in order to hide from the public eye what they are doing.

Does anyone really believe that airlines are pouring millions of dollars into this bill to fight for free speech? If you do, please stay after class. I have a couple of fabulous bridges you could add to your collection at an unbeatable price. Oh, yeah, it’s a limited time offer, too!

The airlines have been on the roll lately. Full flights, less competition, so why indeed not build the time machine that would take us all back into the pre-2012 era? Remember the great times when they could trick customers into booking a $100 fare only to reveal $800 in taxes and legitimately-looking surcharges in the final screen? In fact, if we need a new law, that’s the law banning these shameful, nasty, sneaky fuel surcharges once and for all, just like they do in Brazil.

Take a look at another brilliant spin from Travel Market Report:

DeFazio [D-Ore.] said that “while the DOT had good intentions, the new rule effectively reduced transparency. Consumers haven’t been getting the whole picture of what an airline ticket pays for.”

Airlines for America, the airline trade association, applauded the introduction of the bill, saying the current regulation “unfairly prohibits airlines and travel agents from providing full disclosure of government-imposed taxes and fees in advertised prices, thereby masking the excessive federal tax rate on the cost of air travel.”

The bill “would bring air travel in line with virtually all other consumer products which are sold at a base price, with taxes added on at the point of purchase,” the association said.

Oh dear! You really want to be like “all other consumer products”? Sure, why not?

And there is this:

Source: Delta Airlines I took it upon myself to highlight my personal favorites. Sorry about that.

Sure, air travel is just a consumer product, like everything else. No difference. Nothing at all. Nada.

I’m getting aggravated, and it’s only 3PM here on the East Coast, so I guess, I have to stop now. I don’t know what it is with me lately, but it’s getting harder and harder for me to tolerate such blatant, shameless, and transparent hypocrisy.

Please contact and try to educate these dudes on what consumers really want so they could kill this beast before it gains enough traction. Remember that most of our public servants haven’t booked a ticket for themselves in a very long time. Even those who are not on the industry’s payroll may still have no idea…

Filed Under: Travel News
← What You Don’t Know Can Save You Money
Aftermath of Big Marriott Rewards Devaluation 2014 →
0 0 votes
Article Rating
Subscribe
Login

The bill sponsor is Republican Bill Shuster of PA. Apparently his campaign committee received in only one year, the 2013 – 2014, Campaign, a total of Total of $125,600 from the Air Transport Industry. Go here https://www.govtrack.us/congress/members/bill_shuster/409888. Education will not help. Does the phrase “bought and paid for” come to mind? I wonder if the US Attorney will be looking at this. Everyone write to Republican Rep. Shuster and advise him we know his game.

Michael, I understand Shuster’s interests, but there are quite a few others who support the bill and who don’t appear to be sellouts. I still believe that many of them just have no idea of what this bill is all about.