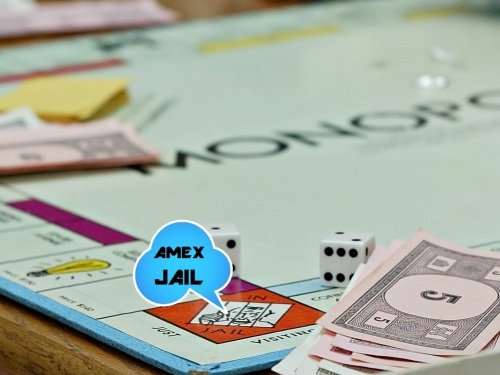 A few months ago I posted a story about someone who got FR’ed by AMEX. Here is her story:

I received a letter from a reader and it was like a Deja Vu. I thought to myself immediately…

Now, this is a story all about how

My life got flipped-turned upside down…

No, it wasn’t in the story. But it was close enough.

Bob (not his real name) is a devoted AMEX user member. He’s had and churned them for about 10 years.

Bob is a full time student who has some odd jobs in the summer. He had two gold cards which he used to travel out of state with BA. Up until recently he had no problems with any of his AMEX cards aside from some fraud alerts that were easy to fix over the phone.

About two months ago, he received an invitation to apply for a 75K Amex Business Platinum card. Being a smart guy who knows better than to take the first offer thrown at him, he called and asked for the 100K bonus. And he kept calling until he got someone who gave him 100K.

Two weeks later, he got another invite for an AMEX Business Gold card with a 75K bonus. He applied and got approved.

Bob has a real, legit sole proprietor business for his summer days. He put down his own name as the name of the business. He also lives with his parents, and files a tax report as a dependent. I believe this is an important element that had contributed to his success story.

Where does it start getting interested, you’re asking? Right here.

He grabbed his RedCard and went to Target to meet his spending obligations on the AMEX Gold card as any responsible citizen would’ve done (LOL), but his swipes were denied. Both of them.

He called customer service and was told the system was being updated. Nothing unusual so far, as the same thing happened to me, and I’m sure hundreds if not thousands of others. Later that night, he went back and did three successful swipes. The fourth swipe resulted in an error.

So Bob called Customer Service and was transferred to the Fraud Department that told him he would need to speak to another “Senior” department that would be available tomorrow. Bob demanded to talk to a supervisor and complained. After a few back-and-forths alternated with a few long holds, he was finally told to try his swipes again.

He did and successfully made two more swipes. The supervisor then told him that everything had been taken care of and he was good to go.

Next morning, Bob received the dreaded call from AMEX that told him to call back. When he did, he was told that all his AMEX accounts had been frozen and that he would receive the follow up instructions by email.  Basically, they wanted to check his taxes and needed his authorization to do just that.

I checked my email and saw that they wanted to verify that I paid taxes last year and I need to fax in a form allowing them to check.

“You are a very unique case”

I usually do not appreciate being called unique by civilians. In the world of miles, points, and free travel, it invariably means crazy. In the world of AMEX Financial Reviews, however, it might mean there is a hope.

Bob called the person who was reviewing his case and explained that he was the part of the family business, that he was a dependant, and that they hadn’t filed their taxes yet anyway. The AMEX guy told him how unique he was and said he’d have to escalate to the manager. Then he came back and said nothing could be done, as the computer said no. Bob reasonably inquired if he at least could keep his personal accounts, and was told that once you’re outed, you’re gone. It wasn’t the exact words he received, but what the hell—I’m invoking my poetic license here.

Keep in mind, that there was another pickle. By the time these events unfolded, Bob hadn’t received his bonus 75K MR points yet. So he paid his balance immediately, and a few days later his 75K bonus arrived. He then paid all his outstanding balances and asked Amex to speed up the pending 15K points or something to his MR account. Took a few calls, but it was done. He then moved all his points out of MR and into airline accounts.

What happened next, I can only classify as a miracle. Here is what Bob has to say about that

I sent a letter to their executive offices and someone from there contacted me and said that they will let me keep one account open. Then they cancelled all my card except one Gold one and they didn’t touch my points.

I guess I was a unique case because I haven’t found any stories online of someone who survived this without filing taxes.

So for what it’s worth, yes, it’s a unique case, but it is possible to get from the eye of the AMEX hurricane in one piece. Even thought they did close most of his credit cards, they left him one, and he would still be able to apply for more, I believe. And honestly, since AMEX won’t give you the same sign up bonus beyond the first one — who cares? The point is… well, there are two points, I think.

Think AMEX Financial Reviews can only happen to hard-boiled MS-ers cycling tens of thousands of dollars a month? Think again! I met Emily, who runs Let’s Roam Wild, at the TBEX conference in Cancun and was impressed when she told me how she had applied for a few credit cards and gotten some nice bonuses… END_OF_DOCUMENT_TOKEN_TO_BE_REPLACED