AMEX PRG 50K Bonus — What on Earth is AMEX Smoking?

Just filled out the application for my cousin, and he did get the card. He has had a few AMEX credit cards, but not the PRG. He also has an AMEX Hilton card right now. That confirms my suspicion that the AMEX’ new policy language for this card is baloney!

After filling out the application, we received the message to give them a call. After verifying a few things, the CSR told us she would have to call us back to verify the phone number. That’s first for me. Timmy was glad he’d entered the cell phone number, so if you are not applying at home, do the same, or your application might be delayed.

Asked for and received an expedited next-day delivery free of charge. Also confirmed the bonus and spending requirement.

As reported by Doctor of Credit, there is a new Amex PRG 50K offer after meeting $1,000 spending requirement. Here it is: https://www304.americanexpress.com/credit-card/premier-rewards-gold/25330.

If you are wondering why I haven’t wrapped the link neatly with a nice title like I usually do, that’s because you will need to copy this link. The chances are you won’t be able to get the offer just by clicking on it. You might only be able to get it by opening it in different browsers and you would have to do it several times before you’re successful. As Doctor of Credit puts it, “keep opening new windows until it appears. I was able to get it to appear using internet explorer, but just keep using different browsers and incognito mode until it shows up.”

CHAPTER One that Explains Why American Express’ Shenanigans Are Stupid

I went for it in the name of research and was able to see the offer for the AMEX PRG Card after the 7th or 8th attempt in IE In-Private browser. 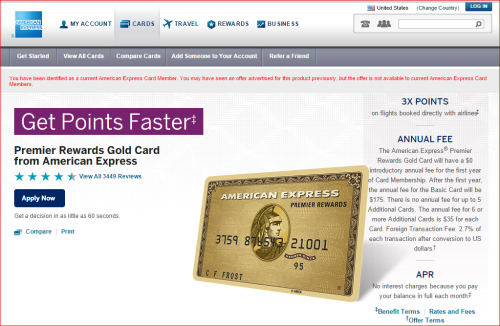 AMEX PRG 50K Offer in Chrome — What? Not even Close! 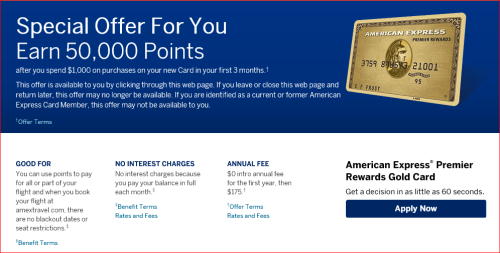 The American Express Membership Rewards is one of the most popular pipe-dream currencies (as I call them) out there, and it is a direct competitor to the Chase Ultimate Rewards program. In fact, if you asked me which points are better, I would have a hard time giving you a straight answer. They are both good. And having to spend only $1,000 to get 50,000 MR points is fantastic, especially in connection with the newly discovered Delta SkyMiles Goodness and that 40% transfer bonus to British Airways Avios. Alas, I can’t get the Amex PRG card. And neither can my wife who has never had it before–at least that’s what it says in the stupid AMEX policy language on the application. Yes, this stupid language.

How is it possible that a distinguished connoisseur of frequent miles and loyalty points as moi cannot get this card, you’re asking?

Isn’t it a travesty? Can it be because I like to devour miles and points, but don’t like to stick around?

Well, yes and yes. Yes, it is a travesty, and yes, they don’t want to give me a new bonus because I am a cynical and an opportunistic troglodyte who loves credit cards solely for the size of their bonuses. 🙂 Last year, AMEX reversed their previous policy. Now you cannot get a bonus if you have held the same card, well… ever.

Fair enough. Stupid, but fair. Why stupid? Wait for it, I’ll explain.

What’s not fair and even stupider in this particular offer, is that Amex PRG 50K bonus “might not be available” if “you are identified as a current or former American Express Card Member”. Meaning, any AMEX card member. Well, curtains, please, because…

Who in America is not “a current or former American Express Card Member”?

And one more question: WTF AMEX? What on earth are you smoking?

Which grammatically qualifies as two questions, I suppose, but you won’t be answering anyway, so WTF?

Regular AMEX PRG business and personal CC offers are 25,000 points each. In the past, AMEX would often come up with better limited-time PRG offers of 50- or 75,000 points for either card.

Then, at some point, they decided to split test their offers. I am not technical, so all I can say is that you could and still can get a better business AMEX PRG bonus if you are willing to do some excessive clicking or use some tricks.

As a reminder, AMEX treats business cards differently. You can get a new bonus if you haven’t had the same product within the last 12 months. So click away.

Now, it appears, they are using the same technique with personal cards. I don’t know why Amex is playing this game, but I personally don’t mind. I’m OK with jumping through some hoops to get a few (tens of thousands) points. However, the customers AMEX loses in the process are not me. The people they are losing are those folks who apply for the card because of a great bonus, then charge the living hell out of it, then get sloppy with their payments, then slip into debt–a credit cards’ wet dream.

AMEX might think they are being clever by leaving the door open so they could deny people they don’t want. Sure, what they want is fresh meat; the folks who haven’t been exposed to American Express cards at all, or who have been very little. Well, I dig that. But nine people out of ten will see this policy language and won’t even bother. People don’t get subtleties. AMEX might welcome folks holding only one or two their cards with open arms, but they won’t get them.

This is what I can only describe as lose-lose.

Well, let’s talk for a moment about the main AMEX nemesis. 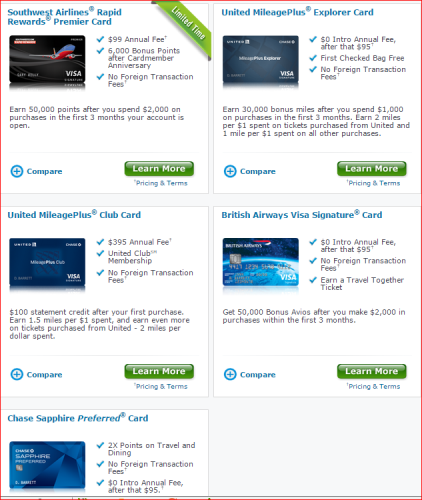 And there are these: 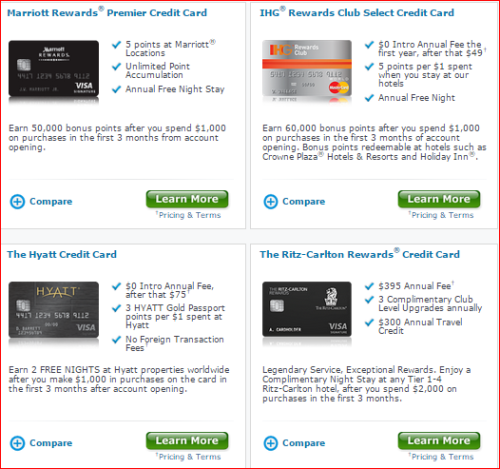 And let’s not forget the Chase Fairmont card, which is not on the Chase website for some reason. And let’s also keep in mind Chase business travel cards, of which I remember six: two United, two Southwest, Marriott, and Ink (please remind me if I’m not mistaken). These are the most desirable cards spread across eight brands (there is also a useless Disney card that I don’t count).

And what about AMEX?

Well, they do have a comparable number of desirable travel cards, but they are only spread across four brands–well, if you don’t count Mercedes as a travel brand, of course. With your permission, I will keep the JetBlue and Blue Sky cards out of this list, because who cares?

And then, as if taunting AMEX who had tightened the new bonus policy, Chase went in the opposite direction with this new policy:

In fairness, Chase never consistently enforced their restrictive policy, even when it was in effect. A lot of people have reported getting a new bonus after just a few months. Nevertheless, the new language makes it much more inviting to apply.

And Chase is not the only competitor beating AMEX at this game. There is also Citi. There is Barclays. There is Bank of America. There are US Bank and Capital One, and plenty of smaller outlets including Wells Fargo who came for their own piece of the pie. So what does AMEX do in a situation when everyone is breathing down their neck? They’ve decided, oh, well, now is a great time to micromanage. They cut off hordes of new and repeat customers by engaging them in a silly game.

Well, whatever! Like I said before, I personally don’t mind. 🙂