It looks like my dry summer travel spell is coming to an end. My last long-distance trip was at the beginning of May to Llorett de Mar and Girona Part 1, Part 2, Part 3, Part 4 and Barcelona (still can’t get around to finish my Barcelona trip report—pathetic!); since then my day job(s) have gotten the best of me. So I’m really looking forward to resuming this silly little thing called travel.

I’m not a vagabond. But I can’t stay grounded for too long, either. Here is where my travels are taking me for the next three months. 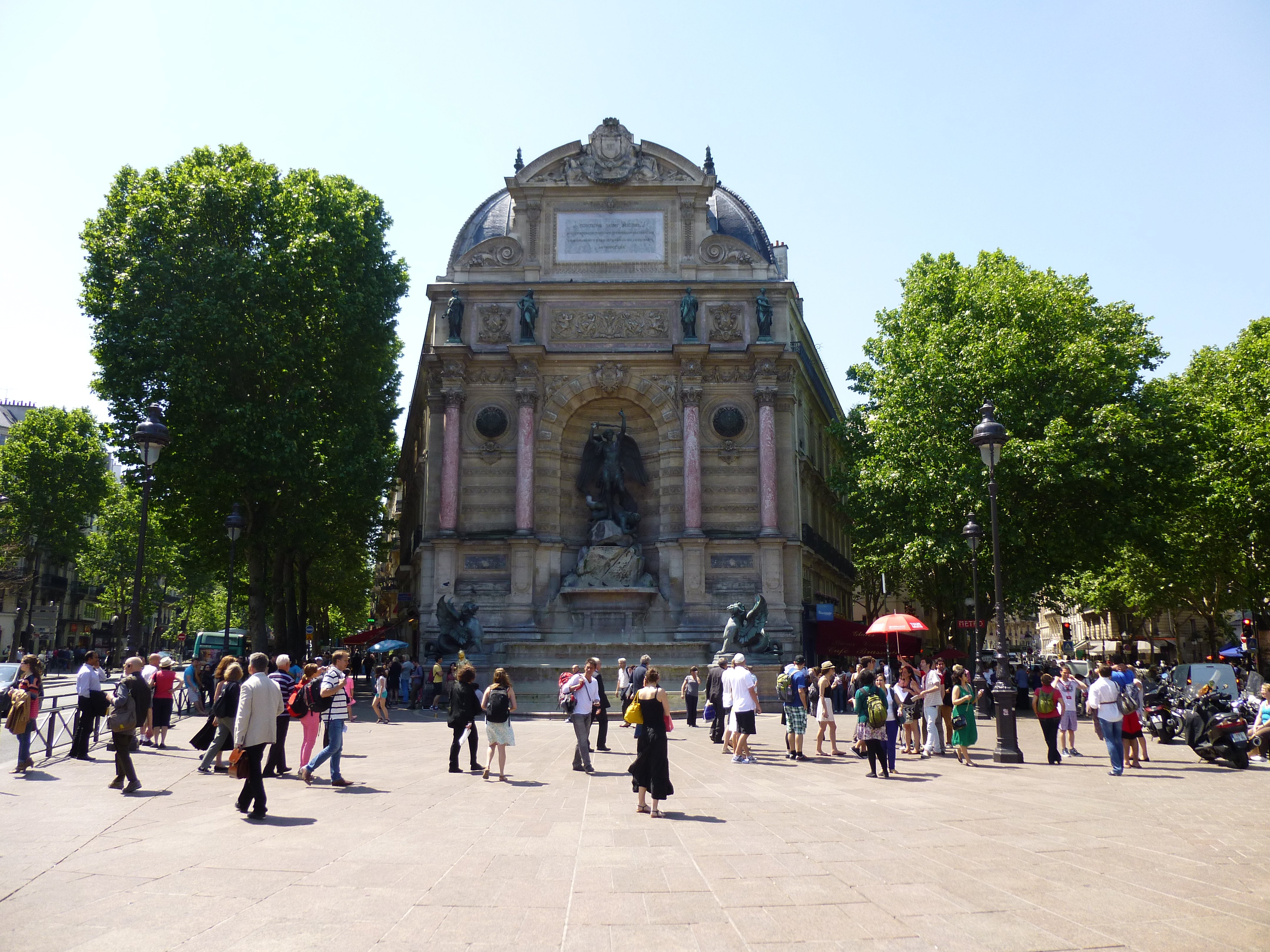 On the 11th, my mom and I are going to Paris for a week. She’s never been, and you won’t believe how excited she is about it. I got us two non-stop business class tickets on AA during that short window when they were wide open. While I could live without “non-stop” and “business class” for a shortish hop to Europe, my mom is scooter-bound, so these were two crucial factors for us.

Paris is not exceedingly handicapped-friendly. A lot has been done in recent years to make it easier for a handicapped traveler, but there are natural obstacles, like uneven pavement, tiny elevators in old buildings (where they do exist), and in most cases, no such thing as “ground floor”. There are always steps.

If you try to google Paris handicapped accessible, you’ll get the picture.

Which brings me to yet another reflection. Don’t wait till your parents’ health begins deteriorating. Fly them in style NOW.

Put Your Parents on a First Class Flight Part 1

Put Your Parents on a First Class Flight Part 2

Then there was an issue of finding a place in Paris. Oh boy! An award stay was out. We would need two rooms or a real two-room suite to make it work, and I don’t have so many points for any single hotel chain. Of course, we could change hotels during our 6-day stay—that’s what I would do if I traveled alone—but again, can’t do this to mom.

So, I naturally started looking into renting an apartment. I’m a huge proponent of vacation rentals, and often forego award hotel stays in favor of this budget and spacious alternative, but I quickly hit the wall. No, it’s not hard to find an apartment in Paris. What was hard, is to find a handicapped accessible, air-conditioned apartment in central Paris in August. Apparently, Parisian landlords don’t believe that spending money on air conditioners is warranted, as there are only so many days it might be needed. If I didn’t experience a hell of a heat in Paris myself last year (and in June, mind you), I might’ve bought into this argument (one landlord tried to convince me that air conditioners are outlawed in Paris, I kid you not). Long story short—the only air-conditioned, handicapped accessible apartments I was able to find, were out of the way, out of our budget, or—most often than not–out of both.

Luckily, before I started seriously contemplating trying some crazy exchange schemes on Flyertalk to top up my Hilton or Marriott account, a friend recommended me an aparthotel. It’s not ideal, as it’s a little out of the way (albeit only 15-minute walk to the Eiffel Tower), but it’s priced reasonably, has everything we need, including a ramp, a large elevator, and an inside pool. My friend was raving about it, and so I was sold, despite less than stellar TripAdvisor reviews.

And quite honestly, I was desperate anyway, so… We’ll see.

At the end of September, I’m flying to Gamburg and Iceland for a week. Going to stay four days in Reykjavik at—you’ve guessed it–two Radisson hotels. Going to stay in Hamburg for two days (at the Radisson, too). Why Hamburg? What do you mean—why? A beautiful port, gorgeous old town, underwater tunnel, and most importantly (promise, you won’t laugh), this!

My flights are all on awards, too. Here is how I’m getting there.

3. HAM-KEF: Economy of course, but this is the hardest! I can fly in the morning on Scandinavian with 15,000 United miles, but there are 2 freaking layovers! Or I can fly in the evening on airberlin with 10,000 AA miles and 1 layover. Both options suck, and revenue options are not much better in terms of scheduling, and cost a lot, too!

Of course, I’d set it up as an open-jaw flight, otherwise, Delta would’ve hit me with YQ for a back home flight originated in Europe.

Later in September, I’m flying to Charlotte for #FinCon15, a finance blogger conference. Not exactly a long distance flight from New York, but a flight is a flight. I went to FinCon 2 years ago, and had a lot of fun, (and made some connections that landed me a few writing jobs, too). The conference is taking place at the Convention Center across from the Westin Charlotte, but I’m SPG-poor at the moment. So I booked Fairfield Uptown, which is, supposedly, 10 minutes away on foot. Who said that Marriott Points are useless? 15,000 points a night yield me a venerable 1:1.2 ratio against a $179 cash rate.

The flight to/from Charlotte will be taken care of with 9,000 Avios. JFK is my first-choice airport, then LGA, then if nothing else is there, EWR. Flights to Charlotte are available from all three, but a flight back—only to LGA. So, OK, fine, here is the simplest possible request: NYC-CLT-NYC.

BA has no problem finding me 4,500-mile one-way flights JFK-CLT, LGA-CLT, or EWR-CLT for the days of my choice. But if I want a roundtrip, then something weird happens. 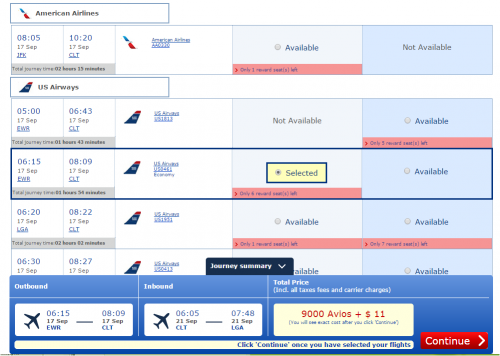 TF is that Avios stings you when you mix airlines, and AA and US are still two different airlines until October when their reservation systems are set to be merged. This obscure, but very important, rule is something I routinely forget when I build my flights with Avios. Here is a short reminder.

In October, I’m going to a #TBEX (travel blogger) conference in Bangkok. I love these gatherings, especially when they happen to be in cool places, where I want to be anyway. That’s going to be an epic—just like my last-year epic Asian trip—or maybe even more epic (for someone who doesn’t usually go away for more than a week). And so, I’ve decided to stick around in Asia for about 2 weeks, and see a few places, including Hanoi, Hong Kong, and yes, Halong Bay. Which impressed me so much when I saw the photos for the first time, that I made it the theme of my book and this blog, as well.

Here is my itinerary.

JFK-DBX-BKK on Emirates in first with a 14-hour layover in Dubai—courtesy of Alaska (100,000 miles).

BKK-HKG-HAN to be determined. Need to figure the dates first.

HAN-JFK on Korean in business, courtesy of Delta (70,000 points)

In Bangkok, I’m staying at the Park Plaza (yep, from the same Club Carlson shredding party). In Hanoi, it’ll probably be JW Marriott—one of the rare Category 3 bargains in the new Marriott scheme.

Everything else is, well, TBD.

Any culinary or unusual Paris insights are highly appreciated!

love these posts where you explain how miles are actually used.