I’m Fully Vaccinated With Moderna. Should I Go to Brazil This Summer As Planned? 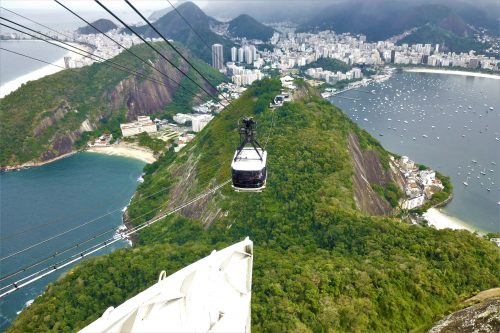 Vaccinated travelers can go places relatively safely. Even CDC says so nowadays. Me, I have my doubts. Because I want to go to Brazil,. which is being thoroughly devastated by the coronavirus.

My first visit to Brazil was in 2001 (on a sign-up bonus of miles from the United card, LOL), and it became the beginning of a beautiful friendship. I’ve been to Brazil at least a dozen times since then, more than any other country.

People often ask me why I keep coming back, as if there aren’t enough places in the world to explore. Good question.

Brazil’s got to be in the top 5 most diverse nations on this planet, both in nature and culture. From north to south you’ve got the Amazon rainforest; the unearthly grandeur of Lençóis Maranhenses; “the most African city in the world,” Salvador; the ultra-modernist architecture of Brasilia; the city and the state of Rio de Janeiro (which alone can take years to explore properly); the magnificent Iguazu Falls; the German city of Blumenau, which is also the home of the second largest Oktoberfest in the world. Seriously, try to wake up in the center of Blumenau after a long bus ride, and you’ll wonder if you’ve been teleported to Germany. At least that was my experience. 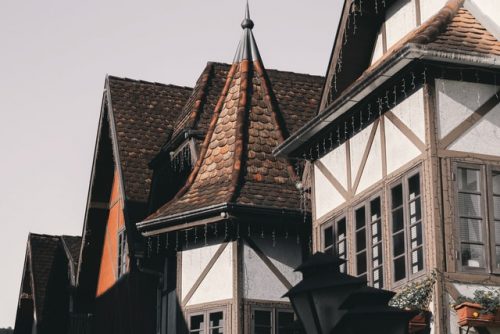 Blumenau — the most German city in Brazil (by Juliana Kozoski)

In no way does this even resemble a complete list. There are hundreds of awesome places to explore in Brazil, from grandiose national parks to charming colonial towns, and even small colonial towns in Brazil are not like one another, and worth exploring one by one!

I could go on and on, but I’ll stop right there before it gets long and too boring. Brazil was the last country I visited before Covid-19 shut down the borders, and so I’ve been looking forward to making it the first place to pop in after I get going again. 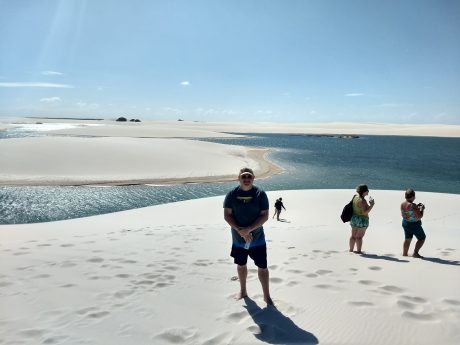 Lençóis Maranhenses: a true wonder of the world very few people know about

I also paid for a 1-hour GOL flight from Rio (SDU) to GRU for a grand total of $21. Flights between Rio and Sampa can be so cheap that wasting miles feels criminal.

Not that I was going to stay the whole 10 days in Rio, but I always carve a small Rio stay out of my busy (LOL) schedule, so I booked a four-day stay at an oceanfront Copacabana hotel with Expedia points (before they gutted their VIP program). Those points bought me an ocean-view suite with breakfast. Good times ahead, right?

​Who can enter Brazil?

Anyone with a pulse and negative PCR test taken within 72 hours of the flight. 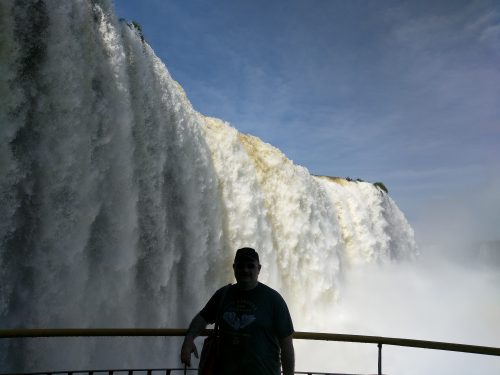 Brazil is being ravaged by Covid. The new cases and deaths are downtrending at the moment, but this trend is fragile.

A short glimpse at the graphs reveals an almost eerie similarity with the caseload in the U.S. On April 26, the 7-day average for new cases in the U.S. was slightly over 55,000. On the same day it was around 56,500 in Brazil. 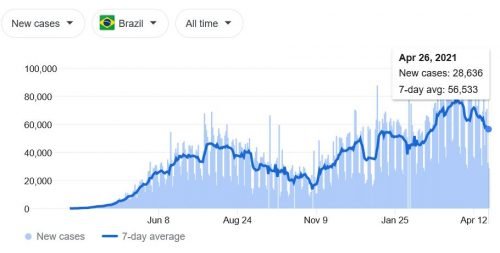 This is where the similarity stops, though. Brazil’s healthcare system is already overwhelmed with shortages of everything from vaccines to ICU beds, to oxygen, to simple sedative medications.

Not surprisingly, the 7-day average for new deaths in Brazil stands at 2,465 vs. 706 deaths in the U.S. (on April 26). It’s still better then the horrific Brazilian record of 4,044 death on April 8, but there is a new worrisome trend going on right now. COVID-19 is now killing more of the young than ever.

Like in most countries, the pandemic in Brazil hit the elderly and immuno-compromised first and hardest. But in the past couple of months, the nation that has stood out as nearly a worst-case-scenario for caseloads, deaths and public policy, has shown where the global plague may be headed: for the young.

In March, 3,405 Brazilians aged 30 to 39 died from Covid, almost four times the number in January. Among those in their 40s, there were about 7,170 fatalities, up from 1,840, and for those 20-29, deaths jumped to 880 from 245. Those under 59 now account for more than a third of Covid deaths in Brazil, according to research firm Lagom Data. As the elderly get vaccinated, their deaths have fallen by half.

There are many causes for the alarming shift but one appears to be that the young have trouble accepting they are at risk [emphasis mine].

After some restrictions put in by Rio authorities in late March, the beaches were reopened on April 26.

People are just being people. They don’t want restrictions and lockdowns, they don’t want to stay home. They want to live their lives. And Brazilian politicians, like any politicians in the world, love to get reelected.

That’s a deadly alignment of interests. Just like in America, but sans vaccines and our more robust healthcare system.

But what about fully vaccinated travelers?

The driving force of the Covid surge in Brazil is the P1 variant. That variant is not only more contagious, but it’s supposedly responsible for a small uptick of deaths. And in a small lab study, the antibodies from people vaccinated with Moderna showed reduced ability (with a factor of 2.3) to neutralize the P1 variant.

That, however, may sound worse than it is.

The reduction in neutralization against the Brazil variant… was a factor of 2.3 … However, the neutralizations were still well above detectable levels. This means that it takes a higher quantity of vaccine-derived antibodies to get the same amount of neutralizing that occurs when the antibodies confront the “wild type” virus.

We don’t yet know whether these new data will translate to any clinical impact among vaccinated persons. Many scientists believe that as long as antibody activity remains above a certain level, that the vaccines will still provide broad clinical protection against serious disease. The data today show that the Moderna vaccine is still well above that threshold.

​So what’s the problem then?

While the risk of contracted Covid by vaccinated travelers is low (and contracting serious disease even lower), it’s not zero.

​If not Brazil – what are the alternatives? 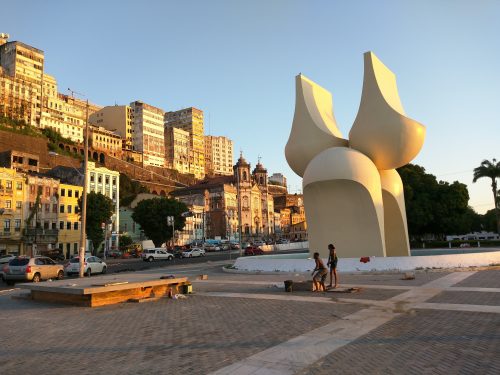 Salvador: “The most African city in the world”

I think I’m going to wait and see. There is still time, and things can go either way. If the situation in Brazil keeps deteriorating, there are other countries that welcome vaccinated travelers, like Greece or Croatia. Plus the EU is about to open its borders to fully vaccinated travelers, as well. In any case, my understanding is that I can cancel my flight without any penalties and redeposit my miles back to both AA and Avianca.

So how about you? Let’s say you’re fully vaccinated and love Brazil as I do – would you travel there?

Filed Under: Miles and Points
← No, the Plague Isn’t Over No Matter How Tired We Are!
New Radisson Rewards 2021 Changes: Part 1 — Digging for Values in the Americas →
0 0 votes
Article Rating
Subscribe
Login

Thanks for your comment HoKo. As Chekhov said, “brevity is the sister of talent.” 🙂

Haha indeed. Seriously though, Brazil will still be there 12 months from now. I just don’t see any good reason to force the issue and insist on doing the trip right now. Just wait till things calm down.

As much as it sucks, can’t argue with that.

I’m with you on having between little and no trust in the Brazilian medical system right now. God forbid you need good medical care for any situation you’re pretty much hosed right now. You make some compelling arguments in favor of visiting Brazil but Crete is lovely too without the desperate medical situation. I’m with HoKo in that maybe 2022 might be the way to go for the next Brazil sojourn? Of course I say this as I’m still planning on doing my trip to Bali in October so take any statements with a handful of salt.