New and Record-High US Bank Radisson Rewards 100,000 Points Bonus and How Much Hotel It Buys You 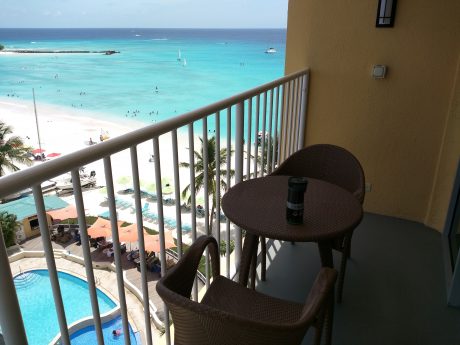 View from my balcony at Radisson Blu Barbados

Per View From the Wing, there is a new and improved US Bank Radisson 100,000 points sign up bonus. The previous bonus ws 85,000 points.

You still get 50,000 points after the first purchase. From what I can see, no other US Bank Radisson Rewards card terms have changed including the spending requirement of $2,500. The only difference is that instead of 35,000 points you will get 50,000.

Radisson Rewards used to be (arguably) the best hotel loyalty program in the world, but since then, Radisson has devalued its program to the point of pure ridiculousness. It’s now worth no more than around $0.25 IMHO.

Having said that, you can still find some outsized values in the Radisson Rewards program if your travel takes you to places where you can find one of their properties. Radisson doesn’t really have a huge footprint worldwide.

I used Radisson Rewards points (called Club Carlson back then) to stay in Reykjavik, Stockholm, Hamburg, Paris, Biarritz, Barbados, and Bangkok — and had a great time every time (less so in Biarritz), but I never used them after Radisson killed its awesome 2-for-1 nights perk. Back then, you could derive an amazing, almost unreal value from Club Carlson points.

Of all the hotel programs, I’ve found Radisson the most consistent in terms of my Gold upgrades. Radisson Suites in Bangkok gave me a free breakfast, just for the asking (the Gold benefit doesn’t normally include breakfast). They almost never failed to upgrade me to a better room, and once gave me a Presidential Suite at Radisson Blu Saga in Reykjavik. This hotel gets a lot of flaky reviews, but it worked for me just fine. 🙂 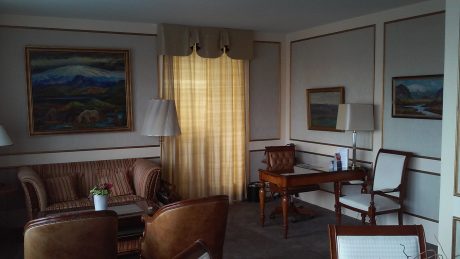 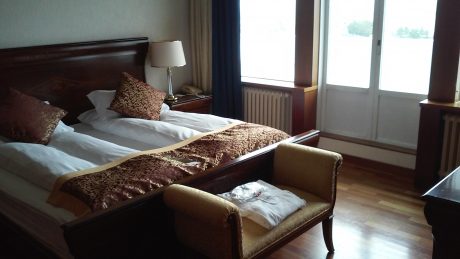 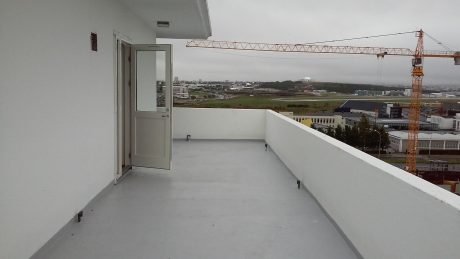 Why, yes, this is my own endless wraparound balcony. Feels a little empty, right? 🙂

How much hotel can the Radisson Rewards 100,000 points bonus buy you?

One horrible feature of the Radisson Rewards (already inflated) award chart is that Radisson can and will charge more points than stated in the chart whenever they feel like it. Having said that, when you book well in advance and avoid major holidays you won’t usually get any surprises.

Here are the hotels that, for one reason, or another, have caught my eye. I’ve tried to pick the most interesting options based on 2 criteria: the location and the quality of the hotel. What it means is that I would be reluctant to list a Country Inn that costs 50,000, unless it’s in a notoriously expensive locale. So, you will find mostly Radisson brands for 50,000 and 44,000 points, that get more diluted with other, “lesser” brands when we getting to lower prices. By the same token, I avoid listing expensive hotels in less than stellar locales.

However, while I don’t know all these places in Norway and Sweden, I do know that hotel rooms in Scandinavia can get extremely pricey. So I’m leaving them intact.

On the other hand, I know that India and China are relatively cheap, so I won’t list Category 5 or 6 hotels in those countries, because I wouldn’t personally spend that many points on them.

This is my methodology, and it’s not perfect. I’m sure I might’ve missed some fantastic properties and listed some average ones. Please feel free to enlighten me about what I’ve gotten wrong.

100,000 Radisson Rewards points will normally buy you 2 nights at those Category 6 hotels. Note: if the revenue cost of your hotel room (with all taxes and fees) is less than $125 — you’re wasting your points, IMHO. 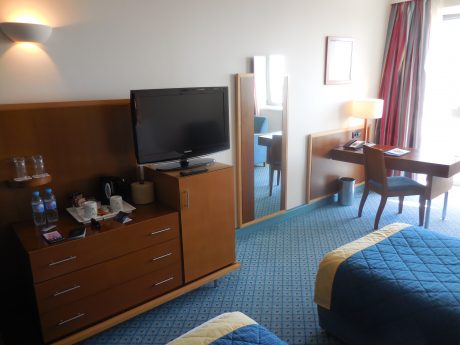 While the view from my Biarritz Radisson Blu room was lovely, the room itself was small and had a bad smell, but Biarritz is pricey, and the cash rate in the midst of summer was $300+.

There are quite a few category 5 hotels at 44,000 points which are also worth considering for a 2-day stay due to their locations. Note if the revenue cost of your hotel room (with all taxes and fees) is less than $110 — you’re wasting your points, IMHO. 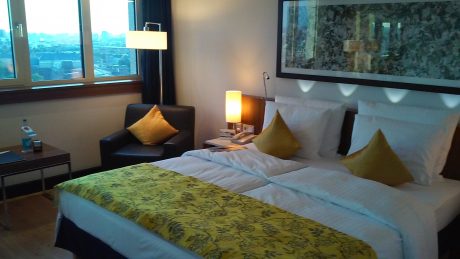 My room at Radisson Inn Hamburg was small but adequate… 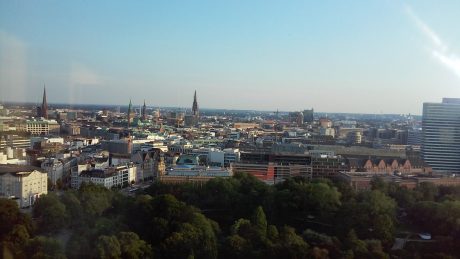 … with a cool view

Your 100,000 points bonus will buy you a 4-day stay at a Category 3 hotels that cost 28,000 points a night (again. remember you’ll need to spend $2,500 to get the bonus, so your total will be at least 112,500 points. Even if you don’t have any leftover Radisson Rewards points, you will end up with enough points for 4 nights. Note if the revenue cost of your hotel room (with all taxes and fees) is less than $70 — you’re wasting your points (IMHO). 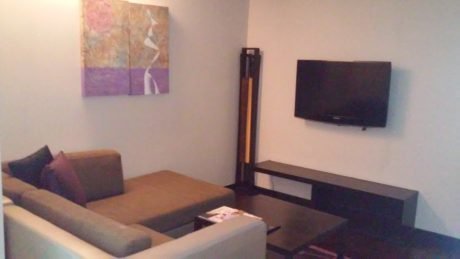 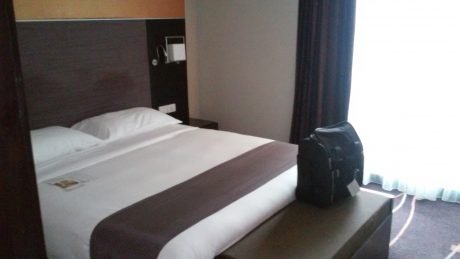 The bedroom was on a smaller side, with a very comfortable bed

With the Category 2 hotels, we’re really pushing it. Still, I was surprised to see a few decent redemption options in this list. Of course, you’ll need to manage your expectations, because at this price-point, your hotel is almost bound to be a little out of place one way or another. Your Radisson Rewards 100,000 Radisson Rewards points (plus the spend) will buy you 7 nights at one of the hotels below. Note if the revenue cost of your hotel room with all taxes and fees is less than $40 — you’re wasting your points (IMHO). Although, I don’t think that’s often the case. 🙂

Well, yeah, kind of, if you’re interested in one of these two. 🙂

The new Radisson Rewards 100,000 points sign-up bonus is not a huge improvement over the current 85,000 points offer, but it buys you 2 nights at a Category 6 (the second from the top Category 7) hotel. And it nudged me to review the Radisson hotels that I haven’t paid attention to for about a year. Win-win! 🙂

Dear Andy, Thanks for the interesting article, and thanks for including your opinion on revenue cost of a hotel room vs. redeeming points for a free night. A noteworthy example of what you’re telling us with regard to Category 4 hotels is the Radisson Hotel Curitiba (Curitiba, Brazil) — a lovely, well-appointed property where I enjoyed a 3 night stay in 2016. What an amazing property! As you begin the check-in process, an attendant approaches and proffers a tray upon which a warm, damp, rolled-up terry cloth towel lies — with which the weary traveler can wipe off his hands… Read more »

Peter, thanks a bunch, I really love your comments!