Deals and Unicorns in the New 25% Citi Transfer Bonus to Flying Blue — Part 1: USA to Israel

UPDATE 6.2019: This article was posted 3 months ago when AMEX had the same 25% transfer bonus to Flying Blue. I’ve completely rewritten it by looking for new deals (and duds) and checking current availability on some routes.

UPDATE #2: As I was digging in, I realized that there are so many things I needed to say that I broke this piece in 2. This one will deal with some new ways to save on travel to Israel. The next installment will deal with other regions.

Per Doctor of Credit, Citi ThankYou is offering a 25% transfer bonus to Flying Blue until 7.20.2019. A good deal? It can be if you’re interested in Europe or/and Israel. Do remember, though, that most Flying Blue airlines add fuel surcharges to their tickets. For a Business Class round-trip ticket to Europe, taxes and fees can reach $500+.

Economy and Business Class to Israel

Flying Blue is famous for its great redemption rates between North America and Israel in coach. For whatever reason, Flying Blue puts Israel and North Africa in Europe and charges accordingly — only 25,000 miles per OW in Economy and 53,000-72,000 miles in Business Class. Imagine paying 25,000 miles for flying nonstop on Delta in a corresponding class of service for only 20,000 City points with the 25% bonus.

Sound like a dream? Well, you can wake up now, because I haven’t found one flight on Delta metal in either class. And while award space on connecting flights is not that bad 10-12 months in advance, you will, in most cases, pay fuel surcharges. The YQ and taxes will run you at least ~$87 in Economy, and ~$230 in Business Class (or around $500 per round trip, because the return flight costs more in taxes).

There is a problem with the Flying Blue search engine. You should never take the first Flying Blue search screen at face value. They tend to push Air France or KLM first (just like AA.com pushes British Airways, but it’s much easier to work around than with Flying Blue). You actually have to click through even if the first price they throw at you is atrocious. Or, if you value your time and sanity, just use Expert Flyer.

However, Business Class award space to Israel from other cities (like Chicago, LA, and Houston) has improved. I would rank it decent to excellent depending on the month. If this is something you can work with, it’s a very good deal, indeed. You would pay 106,000 Flying Blue miles for a round trip Business Class flight on Air France and KLM that would only cost you 85,000 ThankYou points if you took advantage of the current 25% bonus. In fact, a Business Class trip to Israel is one of the unicorns in this post, but let’s not get ahead of ourselves.

Any round trip between the U.S. and the Middle East in Business Class for under 100K miles or points sounds fantastic to me!

Chicago is not the only city with good availability for Business Class tickets to Israel. 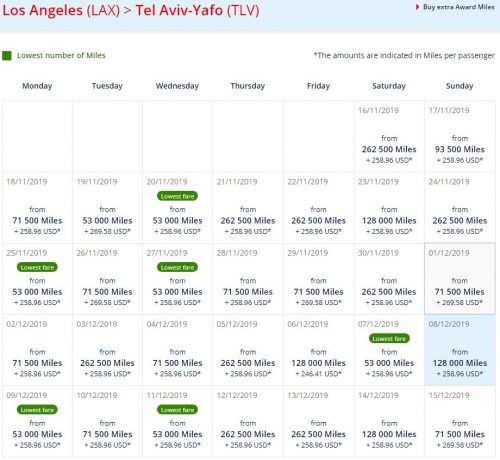 Remember I promised to show you availability from New York? This is New York to Tel Aviv in Economy. 25,000-mile flights are not easy to spot, but they do exist. 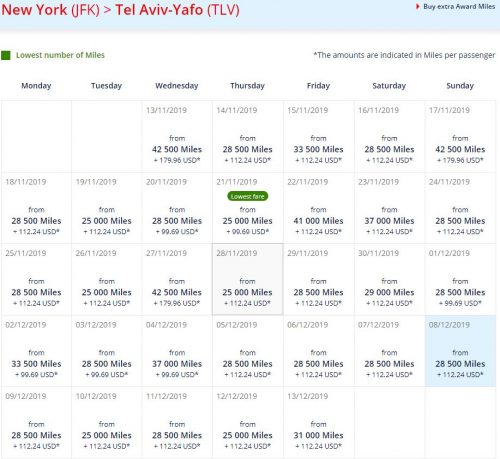 And in Business Class.

What about fuel surcharges?

You might feel that the ~$250 cash copay per one-way flight is not that bad considering the low mileage price, and you’re right, it isn’t. However, $250 is still $250. Can you do better?

You can, but it’ll cost you more in miles!

UPDATE 06.2019: It’s become very difficult to stitch a flight to Israel with a Delta connecting flight, even if the nonstop transatlantic flight is available — probably due to married segment restrictions. Instead, search for flights on Air Europe with the first leg to Madrid –it doesn’t add fuel surcharges.

You can fly to Tel Aviv with a very low YQ (fuel surcharge) if you know where to look. Air Europa availability is far from excellent, but it’s the practically the only option without fuel surcharges you can find.

But then, do you value these points enough to buy 15,000 points for $200? Because this is exactly what you do when you choose an Air France flight instead of Delta.

See, almost the same question, yet — so different.

I would rather buy this ticket for 58,000 Citi points (72,000 miles with the bonus) and pay ZERO fuel surcharges. It’s still a fantastic price for traveling to the Middle East in Business. You, however, might feel differently.

And that’s OK, this is not a right-or-wrong question.

What Air France plane to fly?

Some of this information may be outdated, but the gist is correct.

Here is what I’ve figured having checked  the Seat Guru (not always accurate), as well as some blogs and forums.

You don’t need to worry when flying on KLM. All their long-haul fleet is fully lie-flat.

Remember that preparations can only take you so far, and that any airline has the right to swap out equipment to their heart’s content. Don’t sweat it if you find yourself in a “lesser” airplane.

Flying Blue is well known for its discounted promo awards on Air France and KML. If these awards worked for you in the past, you might want to take advantage of this 25% Amex bonus, even speculatively. Remember that because all travel must be on Air France or KML, the fuel surcharges of ~$250 per one way are inevitable. These surcharges are slightly lower on KLM than Air France. You must book by June 30 for travel between August 1 and September 30. 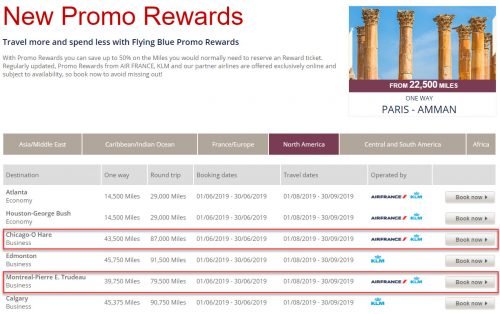 We’ve already established that Flying Blue offers quite decent Business Class award space between Chicago and Tel Aviv. Time to take it to a new level.

Remember, Flying Blue for its own goals and purposes believes that Israel belongs to Europe. Flying Blue promos follow the same suit. When you enter Tel Aviv as your final destination in August or September, you might be surprised! I’m not saying there are a lot of Promo awards between these 2 destinations, but you can get lucky every now and again. 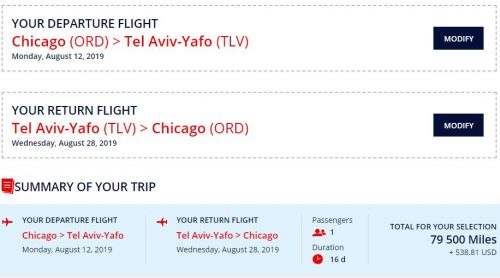 You can get a round trip flight between Chicago and Tel Aviv for 79,500 miles (which is already an awesome redemption for Business Class Travel between the U.S. and the Middle East) using the Flying Blue June Promo. Better yet, transfer your Citi points with the 25% bonus and get it for 64,000 points. Simply unbelievable!

Award space to Israel in August and September looks much better from Montreal than Chicago. If you’re based anywhere in the Northeast, consider getting a positioning flight to Montreal as the first leg of your journey. 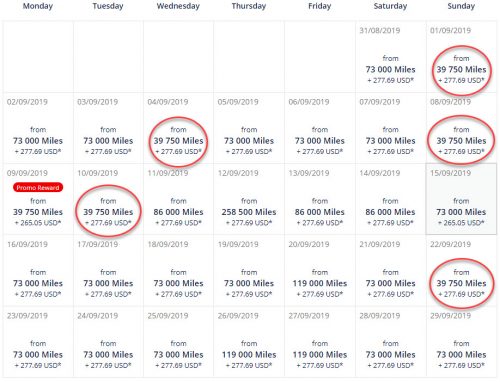 Good Business Class availability from Montreal to Israel in September

Return availability from Israel is equally good (at the time of writing). Your final round-trip ticket will cost as much as the journey between Chicago and Tel Aviv: 64,000 Citi points! For 64,000 points, even I would be fine with the ~$500 copay, and you know how much I hate fuel surcharges!

Unicorn #3: Houston to Tel Aviv in Economy (say what?)

Yes, a unicorn. I insist!

The Flying Blue June Promo prices a flight between Houston and Europe at 14,500 one way and 29,000 per round trip. And because, remember, Israel is Europe, the promo stands. 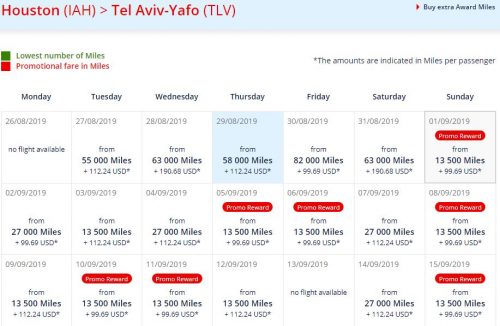 … as well as from Tel Aviv to Houston. 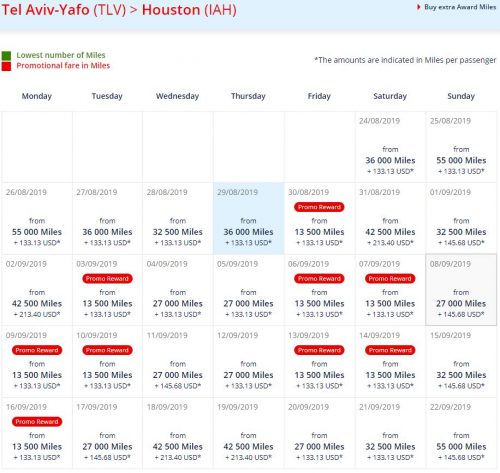 Which brings us to the final screen.

To get some perspective, here is what some other major airlines charge for travel between the U.S. and Israel (Middle East) in Economy and Business (one way).

Next Installment: Deals and Unicorns in the New 25% Citi Transfer Bonus to Flying Blue — Part 2: USA to Europe and Latin America

Thank you. This is one of the very few blogs to visit when you want to learn about the tricks. “Unicorns” is a great term for this!

Great work as always. Love the material you’ve been putting out in the award realm.

Thanks, and ouch, fixed!

Hey Andy, I’m new to your site and I found this article very interesting! Just curious, how did you get Unicorn #1 to show on the KLM site?

Just click through on the promo page link, although I think it should work from a regular search page too. Remember that the promo covers only travel in August and September.

If you still can’t find it, then it’s gone. I published it a while ago, and availability from ORD wasn’t very strong even then. 🙁