30% American Express Transfer Bonus to Virgin Atlantic and Why Go for It: Part 2 – One Unicorn Redemption on South African Airways

Johannesburg, South Africa. That’s what you should do when you score a 39,000-point Business Class seat to Africa

Update: The Bonus is Dead

If you have one of the American Express Membership Award cards that allow you to transfer points to airline programs, you should seriously consider this promotion. The 30% American Express transfer bonus is a cool thing. It turns almost every redemption into a steal. Or it would if South African Airways didn’t give us such a hard time to find an award seat, especially in Business Class.

Update 8.4.18: I was pleasantly surprised that Business Class award space on South African Airways from New York to Johannesburg has become much better in the last year (you can look for it by searching United or LifeMiles). And you’ll only pay 58,000/116,000 AMEX points for a Business Class seat. Find your seat first, then transfer the points and book over the phone.

Let’s compare availability from New York to Johannesburg  “then” and “now.” 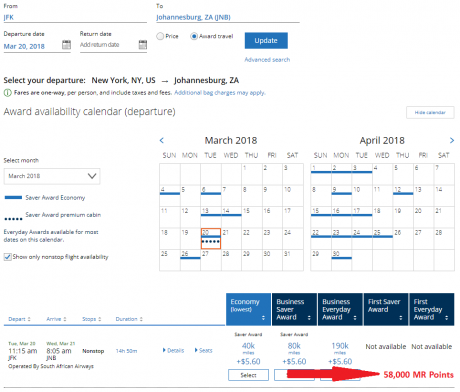 And this is how the spring 2019 availability looks now. Ok, not ideal, but much better than last year. 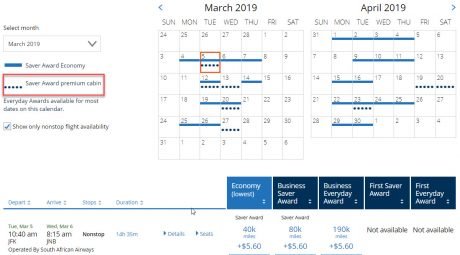 This is not an isolated phenomenon. The award space is even better in winter, although it dries up in May. You should (theoretically) be able to book the inventory you see on the United or LifeMiles websites.

So what’s that South African Airways unicorn redemption, you ask?

I’ve almost refrained from posting it, because good things do get killed when too many people are talking about it. But then I remembered that amazing Brussels Airways JFK-BRU redemption on Etihad. People, including big-name bloggers, touted it for years and, sure enough, at one point it did get killed. Was it killed because of the bloggers, though? I don’t believe that. For one thing, it was a fringe redemption. And it was hard to get. And Etihad was probably doing its own maintenance thing and decided enough is enough. Bottom line is: my Africa find (not claiming the authorship, but I’ve never found a single mention of it in Google search) is even more “fringy” than the Brussels Airways thing. 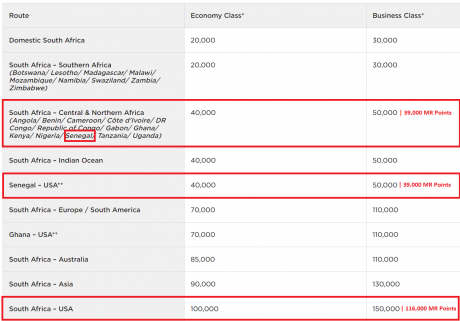 50,000 miles for a roundtrip flight in Business Class between the U.S. and Africa

UPDATE 01.06.18: The new airport is now open in (near) Dakar. When you’re looking for flights, look for DSS – Blaise Diagne. Availability seems to be excellent, so far. 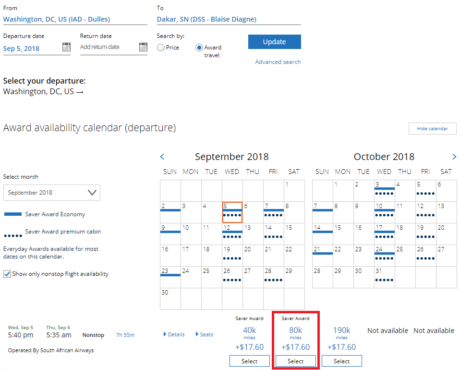 Remember, that’s BEFORE the bonus!

The flights are reasonably convenient, too. You arrive at DKR at 5:35 AM and depart at 6:35 AM. And don’t worry about the short connecting time – you will normally be traveling on the same plane. Or you can take an improvised stopover for as long as you want. I’ve never been to Senegal, but I hear it’s a fascinating country.

Update 8.4.18: Look at this beauty! This is a flight from Washington to Dakar. South African flies this route 3 times a week, and Business Class awards are almost always available. 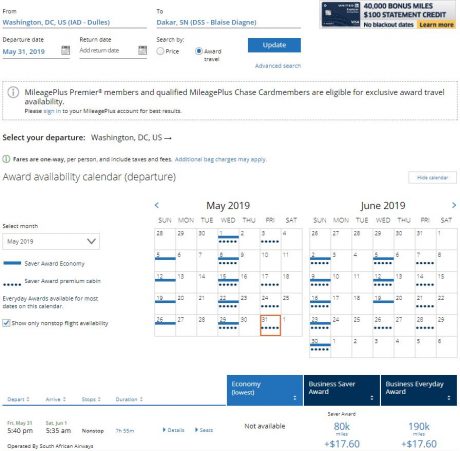 Here is award space between Dakar and Johannesburg. You’ll fly on the same plane (and for about the same amount of time). 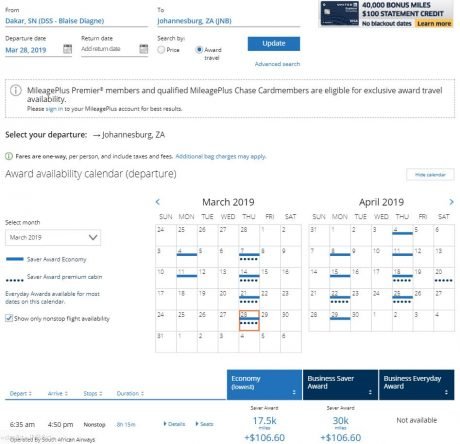 Again, we’re talking about the cost for a Business Class seat on a roundtrip flight. To Africa!

Even without the 30% American Express transfer bonus to Virgin Atlantic, this is quite insane. With the bonus, this redemption is out-of-this-worldish (in full compliance with the title of this piece)!

Must be some kind of a price mistake, right? Nope. I called Virgin Atlantic and was able to put the award on hold for 24 hours. A one-way IAD to DKR flight for 25,000 miles, and the whole thing took about 5 minutes!

If you want to explore this option to see more places in Africa, check the Dakar airport Wiki.

Can you use Virgin Atlantic miles on South African Airways within Africa?

Madagascar: Avenue of the Baobabs

You can fly roundtrip in Business Class between the U.S. and:

Also, keep in mind that you can fly between Johannesburg and other African destinations, such as Victoria Falls, Madagascar, or Mauritius for 16,000 / 24,000 Amex points in economy / business per round trip.

Not too shabby, I say.

This post was written in November 2017 and was thoroughly updated on August 4 2018 due to the return of the AMEX 30% transfer bonus.

Johannesburg: by Keenan Constance on Unsplash

Wow! Amazing writeup Andy.. did you end up bookin the reservation?
Always looking forward to your posts. Lots of insightful info.

Thanks for your kind words, Sam. No, I didn’t, but only because I have this ridiculous dream of flying to South Africa in Etihad Apartment (well, half way). Can’t take that fabulous cabin out of my mind… 🙂

Andy, any fuel surcharges for these redemptions? Thanks

So can I fly from Washington to Senegal to Tanzanai for the 50K RT rate?

[…] By using a sweet spot on the Virgin Atlantic partner award chart you can get from the US to Africa and back in business class for only 50,000 miles and $131 in taxes and fees. This is about 70% cheaper than most other awards between the US and Africa and represents one of the best values for getting to Africa in a premium cabin. If you wish to continue your journey beyond Senegal or South Africa then you should look into ANA partner awards as a cheap and flexible option for intra-Africa travel. Virgin Atlantic is a transfer partner… Read more »

Andy, Great Post and good to see you posting in my box again…

Any suggestions for getting to IAD from the west coast (or really any other US airport)? Do you have to fly Delta domestically?

Raj, not sure what you mean. IF you mean that SAA flight, Delta won’t help, and Virgin adds miles for every additional segment. I would just book the cheapest positioning flight (miles or cash) I could find.

Yeah, I thought it wouldn’t cost additional miles to start on the west coast (where I live). But that’s good to know that you have to get there separately, Thank you.

Thanks Andy. Good to see you back online.

We were in South Africa a few months ago and just loved it. Also made it to Mauritius for 5 days towards the end of our trip and really enjoyed our time on the island.

Do you have to position to a hub to get this flight? I’m curious for us folks that live in Kansas City, Omaha, etc and the likes

Unfortunately, yes. Can’t mix carriers and even if you could, each segment counts.

Great info, thanks. If we did IAD-DSS RT and then DSS-JNB RT we would need to collect luggage, go through immigration and recheck–correct?

That’s a great question. I honestly don’t know how it would play out, because you’re flying on the same plane, and there is only 1 hour on the ground. You might want to call SAA with this question and also see if booking oneways would make a difference.

I found luck booking from IAD, but GEESH! They want $637 in taxes and fees. Any thoughts of how to avoid this?

Did you call Virgin and they gave you this quote? If so, this is a new and unpleasant development. Last year they only charged the actual taxes.

Yep. They can’t explain the breakdown, just giving me the cost. I tried two different bookings and each are well over $600. This must be the way it is now.

Still not a terrible deal, but yea. Thanks for your posts!

Sad! I guess, they’ve figured out the way to make this redemption less appealing without tweaking their contract with South African. Thanks for the DP — updated!

I just booked 2 seats on the one way IAD>DSS, 25k plus 218.50 GBP per person. The fees are a little high but I think this is still a great deal for business class. I chose the only date I could find next year that had more than 2 seats in business. Haven’t decided how we’re getting back yet. Of note, they asked me if I wanted to pay in USD or GBP. I wasn’t prepared for the question and went with GBP since I was worried they would do that awful conversion trick and give me a horrible rate,… Read more »

Rest assured they would’ve charged you for the laborious task of converting into your home currency. 🙂 A long long time ago I paid BA with a 3% FTF credit card not realizing it was an oversea purchase. They screwed me quite nicely by tacking on at least 6% extra for that and the conversion, I guess. The credit card did NOT reverse that fee after I complained. You did the right thing, although the YQ is painful.