The Merger of Them All 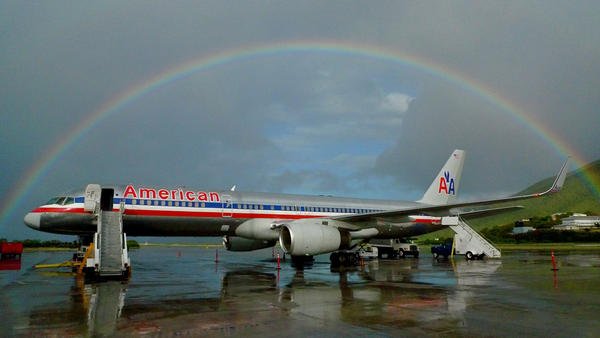 The main event of the last week was the decisive victory of American Airlines, US Airways, and ultimately the US consumers over the DOJ’s malicious attempts to halt their merger. Since American and US Air agreed to divest a few slots scattered across some of the nation’s airports, the merger will proceed as planned. The merger is expected to boost the industry competition, decrease airfares, and further improve the carriers’ respective frequent flyer miles programs.

In addition, AAdvantage and US Air have vigorously denied persistent rumors of coming devaluation of their respective frequent flyer programs. To commemorate this historic event, the airlines have announced the decision to slash their premium class redemption levels for both programs by 75%, effective 04/01/2014. “Our consumers are the only reason that our planes take off every day,” explained future American Airlines CEO Doug Parker. “So we are happy to repay our debt to our customers and offer them more affordable luxury in the sky. We are also waiving Dividend Miles award processing fees until further notice,” he added.

The initiative sent waves throughout both One World and Star Alliances. British Airways’ CEO Keith Williams has announced that the Board is considering ending the levying of fuel surcharges on their award tickets (otherwise known as YQ), while emphasizing that the decision has nothing to do with the ongoing litigation. “This is certainly something we need to think about long and hard,” he said during the late night press conference at the British Airways Galleries First Lounge at LHR.

Across the Atlantic, United CEO Jeff Smisek admitted that the recent devaluation of the MileagePlus program “was a tragic mistake that could potentially lead to mistrust on the part of disenfranchised United fliers. We must do something about it,” he confessed during an emotional interview with the reporters of the Flying Pantcies magazine. “And we’d better do it now before it’s too late.”

Outside of the major alliances things are looking up for consumers, as well.

Alaska Air Group Chairman Bill Ayer announced that their recent devaluation wasn’t thought through well enough. “Even though the flying public doesn’t think that the cuts to our Mileage Plan have been drastic enough to warrant a wide-spread outrage, we shouldn’t take that as a silent stamp of approval,” he said to the Low Flier industry newsletter. “We will work swiftly on reversing these changes in order to avoid a potentially negative effect on our customers.”

The hospitality industry had plenty to say too. Hyatt Chairman Thomas Pritsker admitted that their recent changes to the Gold Passport loyalty program were rushed and ill-conceived. “We should’ve asked the consumers first,” he stated in an interview with Soil That Mattress trade publication. “Who would’ve thought that people still wanted to stay at Park Hyatts for 22,000 points? By increasing our award levels we intended to help our loyal customers find simpler redemptions at less fancy properties where things would be less complicated and more comfortable for them. Apparently, that was a mistake. I pledge to you today not only to return to the past levels—that would not be enough to restore trust—but also beat our old redemption rates by a couple thousand points. I think 20,000 for a category 7 hotel would be a good enough number: rounded up and easy to remember.”

But if you think that only the travel industry was affected by the merger between US Air and American, you are mistaken! Amazing news stories keep pouring in from all over the world: spiritual, uplifting, and inspiring!

Joyous celebrations have spontaneously burst out in Israel, West Bank, and Sector Gaza. The US-American union has inspired the long-time rivals to stop hostilities.

The Civil War in Syria is ending. “We just don’t want to fight anymore,” said on camera one of the rebels while hugging a pro-government soldier. “Life is so beautiful, and war is ugly!”

Presidents of the UK’s largest soccer fan clubs have made a joint announcement calling to end soccer hooliganism once and for all. “If it weren’t for US Air and American, we would keep burning cars and smashing heads,” said one of the reformed hooligans. “Now, after the merger, it just doesn’t make sense anymore!”

National Geographic reports that a rare phenomenon took place immediately after the DOJ removed their objections to the merger: in the middle of the hustle and bustle of travel, a beautiful rainbow just appeared in the sky, over all US Air and American hubs in the US. It made even the most hurried passenger pause and stare with awe. Amazingly, not a drop of rain preceded this unique natural occurrence…

The above was a visual demonstration of what acid can do to your brain. Say no to drugs, kids, and stay in school.