At the EWR United Club right now waiting for my flight to Berlin. Spent the holiday in Long Island with my family, stayed at Hyatt Place in Riverhead. I already visited this lovely town 2 years ago (also for the Independence Day weekend), so I won’t bother you with the details, just read my previous report. It’s a nice place to spend a couple of days.

In the last 2 years, Hyatt has raised the redemption rates for this property from 8,000 to 12,000 points, which is understandable as the cash rates for this weekend were $399, and the rooms got sold sold out eventually! I transferred 72,000 points from Chase and booked two rooms — one for my mom and another one for us. That’s a lot of UR points, but considering the cash rate, also a heck of a deal at more than 3X ratio. It makes me shake my head at how bloated the Marriott, Hilton, and IHG levels have become.

The Hyatt Place Long Island East End is next to LI Aquarium. I didn’t go there when I was i town two years ago, but this time I did, and was surprised how much I liked it. Of course, it’s smaller than New York Aquarium and much smaller than Boston Aquarium, but it’s a very nice place to spend 2-3 hours. You can:

The last two weeks were really hectic. I will add pics when I settle in at the hotel.

Anyway, my voyage is taking me to Europe. I’m attending the TBEX Europe Conference (again) in Stockholm, and visiting a few other places, because it’s a waste to go to Europe for three days. My flight is taken care of by this ANA award. 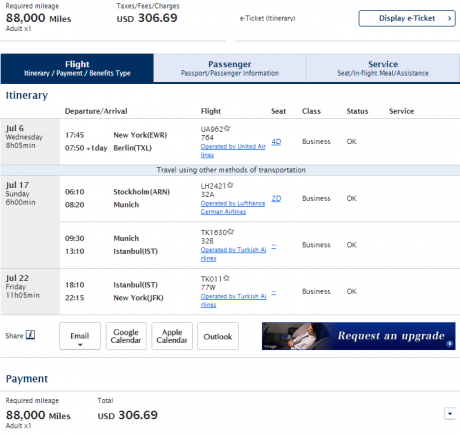 I’ve never been to Stockholm and Istanbul, and only spent 1 day in Berlin 2 years ago, so I’m looking forward to explore these amazing destinations.

First time ever used Hotwire secret hotels. Picked a 5-star in the central Berlin for $73, since how can you go wrong with that? Turned out to be Pullman. The nightly $73 rate also turned into $290 for three nights after taxes, fees and the “resort scamcharges”, but, come on, for under $100 a night, I’m not complaining.

In Stockholm, I’m staying at two Radisson hotels, the Viking and Waterfront. Booked them at 50K points each, just before Club Carlson murdered that fabulous 2-for-1 deal. And one of them is the #TBEX hotel, lucky me! I still need to book the final night in Stockholm, but I’m not concerned, The last-minute Stockholm hotel prices don’t seem excessive.

In Istanbul, I’m staying five nights at Hilton Bosphorus for 120K total. Would be a good occasion to check my newly minted Diamond status. While I can’t say I’m not apprehensive to go to the place that some lunatics chose as their blowing-things-up playground, I fully intend to be OK.

That’s it for now. Will keep blogging on the road (hopefully).