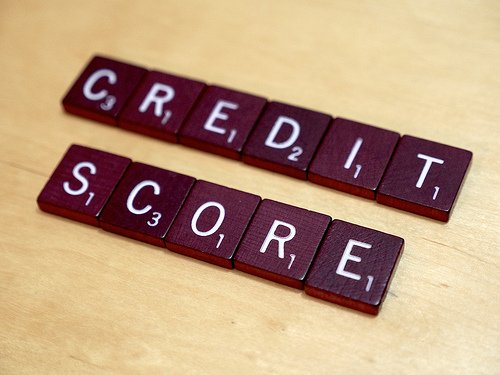 Do you want to know your real FICO score for free? Real FICO, real FREE, and whenever you want it? Read on!

Look, I have to admit: my secret handshake here has nothing to do with the new FICO 9 score. I hoped to dig out something else other than what I had already blogged about, but couldn’t.

Yep, can’t get anything more out of FICO or anyone else about the new score. The huge thing for a lot of people is that FICO from now on will go easy on medical bill delinquencies, especially the ones that have been paid off, but I blogged about it already in the Part Two, so no news here.

Instead, I want to share a trick (please forgive me if it isn’t new to you, but it was new to me). I was browsing My Fico forums and found this old thread: Lending club declination credit score? In that thread, the OP was talking about his experience of being declined for the new loan and mentioned that he “might have found a “back door”(?) to get… Transunion… credit score from Lending Club”. Basically, his backdoor opened up when he was declined. When you get declined,  FCRA requires the lender to tell you why, although it doesn’t require them to give you the score. Some lenders, including Lending Club do it on their own volition.

So how does one get declined? When you fill out the application, they will ask you about your income. Guess what happens if you put too low income while asking for their highest loan. I put $10 and asked for a $35,000 loan. After that I immediately got this screen. 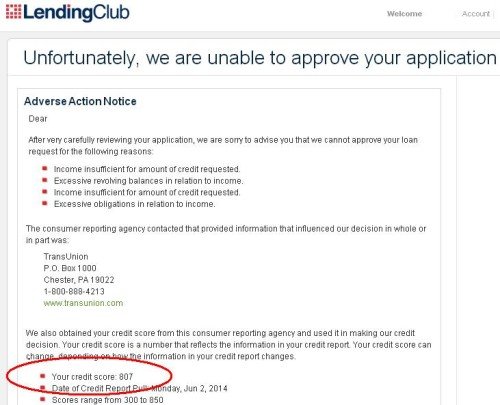 Now, someone on My Fico suggested that the OP’s score was a Transunion 98 score, and well, it might have been two years ago. But this score I received is very close to my most recent score from Barclay. 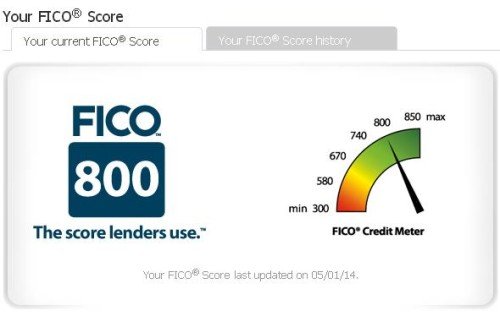 Note that the Barclay’s score was updated on May 1, so I am pretty sure the Lending club gives you the same Transunion FICO 8 score as Barclay.

I don’t know for sure if there might be any adverse effects from going through this backdoor, but I can’t imagine why it would be. It is not a hard pool, and I have no intention to borrow from Lending Club anyway. On the other hand, if you are a Barclaycard holder, the usefulness of this trick is somewhat limited.

But I thought it was cool, anyway.

Part One is Here There are considerable changes between FICO 8 and FICO 04. FICO 8 is the most “pro-consumer” model to date, although some new measures are more punitive. Here is what changed (from the horse’s mouth): High credit card usage FICO 8 score is more sensitive to highly utilized credit cards. So if… END_OF_DOCUMENT_TOKEN_TO_BE_REPLACED

Yesterday, Delta released their new 2015 Redemption Chart. In the meantime, they casually stole the ideas I outlined in my recent piece:  Delta Airlines, Hotel, and Casino. Tall claim, isn’t it? Oh, but I have the proof. Right here. In an attempt to explain my clumsy title I wrote this: Using several award tiers… END_OF_DOCUMENT_TOKEN_TO_BE_REPLACED

Why You Shouldn’t Listen to Dave Ramsey Credit Card Advice

Yesterday, I browsed the net aimlessly and found a CNN Money article titled Save Like Dave Ramsey…Just Don’t Invest Like Him. The article claimed that following the investing advice from this well-known financial guru could be misleading and sometimes detrimental to his followers. However, the CNN article went on endorsing his saving advice, just not… END_OF_DOCUMENT_TOKEN_TO_BE_REPLACED

Why is it good? Because when you churn, you must watch your credit usage. As you can imagine, there are plenty of paid options out there to do exactly that but before last week your only free option was Credit Karma. Now, I am subscribed to Credit Karma Monitoring, and it’s a great service, so… END_OF_DOCUMENT_TOKEN_TO_BE_REPLACED