What’s Wrong With the Reopening of America in the Midst of COVID-19? Denver 1918, That’s What! 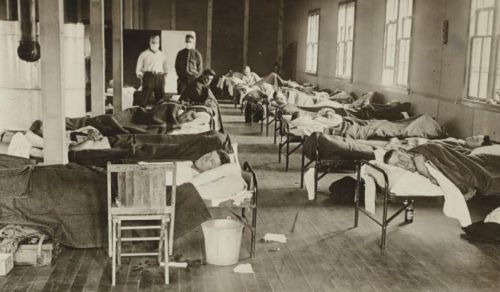 People are hurting. Businesses are hurting. The economy in general is hurting. COVID-19 has locked us inside our homes and apartments and out of the workplaces, beaches, bars, and shopping malls. We are scared, bored, helpless, and miserable, and our patience is wearing thin. Wouldn’t it be nice if someone – anyone – could give us a date when this nightmare will be over?

Well, politicians are happy to oblige. Trump proclaimed that a “national shutdown is not a sustainable long-term solution.” State governors, Democrats and Republicans alike, aren’t offering much resistance. Texas has announced it will lift its stay-at-home order in early May, South Carolina is opening retails stores and beaches this week, while Florida has already opened beaches and parks in Jacksonville for limited hours. See for yourself how “well” social distancing is being observed at the Jacksonville beach after reopening.

Georgia is about to re-open gyms and salons on Friday, and even New York’s Cuomo, while being more cautious than others, has announced “moving into another phase, which is this reopening phase.” And as if our politicians had not been sufficiently proactive, “we, the people” went ahead and gave them a nudge. According to CNN, “Michigan, Ohio, Kentucky, Minnesota, North Carolina and Utah – states led by both Republican and Democratic governors – have all seen protests in recent days as people grow more concerned about the economic fallout of the coronavirus pandemic.”

And then, in the middle of the worst existential national crisis of the last 100 years, Trump calls for his supporters to “liberate” Michigan, Minnesota, and Virginia. Sure, I’d also suggest we “liberate” Michigan first, with its third-highest coronavirus death toll in the nation after New York and New Jersey. Sounds promising.

How promising? Read on.

Spanish flu was a pandemic that terrorized the world in 1918 and 1919. You’ve probably heard or read a few curious facts about this mysterious disease. It infected one third of the world’s population, caused more deaths than WWI itself (between 17 and 100 million people worldwide), and despite the name it didn’t originate in Spain (probably).

What’s less well known, yet just as astonishing, is a striking similarity between the choices people were facing back then and the choices we’re facing right now – over 100 years later.

In 1918 the most crucial part of fighting a pandemic was keeping people away from each other, which is exactly what we’re struggling with today. No miracles of modern medicine will help (as it didn’t help back then) if that painfully simple, yet so complex remedy of staying home fails to work.

Spanish flu started spreading in spring 1918, but the first wave was relatively mild. Deaths were rare, and people would normally recover in just a few days like they would from a regular flu. It wasn’t until the fall when the second and much deadlier wave started killing people within mere hours or days of getting sick. On September 27 the disease claimed its first Coloradan victim, a University of Denver student, Blanche Kennedy.

But even before Blanche’s death, Denver Manager of Health Dr. William H. Sharpley was taking proactive measures. He asked the residents to avoid crowds, cover their mouths when coughing or sneezing, and ventilate their homes. In the following week, there didn’t seem to be many new cases, and on October 3, a local paper declared Denver free of flu.

However, the very next day the number of new cases and deaths shot up, and Dr. Sharpley, who was also a former city mayor, acted quickly and decisively. First, he ordered hospitals to isolate new arrivals, and on October 5, the city ordered full closures of schools, clubs, churches, lodges, movies, dance halls, theaters, and poorly ventilated work places. It also banned indoor gatherings, although shops, cafes, and restaurants remained open.

On October 8, Dr. Sharpley announced that the epidemic was under control. He was wrong. 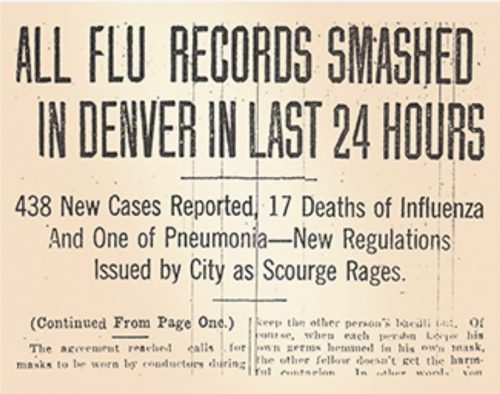 Since outdoor gatherings were allowed, they attracted huge crowds, sometimes of thousands and tens of thousands of people. On October 15, the city reported 257 new cases in the last 24 hours, bringing the total number of cases to 1,440.

Sharpley and Mayor Mills once again reacted quickly. Denver now banned all gatherings including outdoor meetings and even funerals and instituted staggered business hours to reduce the load on public transportation.

The measures helped. On October 20, it appeared that the rate of new infections had dropped. Mayor Wills announced that the epidemic would be over in a week, and Sharpley was confident that the city would be able to open theaters and schools on October 26. However, the state health authorities disagreed and on October 25 the closures were upheld.

In early November, however, the situation seemed to improve considerably. On November 7, the city leaders and the state health board held a meeting on re-opening Denver. The churches would be allowed to open (albeit with limited hours), and theaters, movie houses, and other entertainment venues were allowed to open their doors after midnight. Schools were set to open on November 18. Other safety measures remained in place.

Then came November 11, the day of the Armistice, which ended World War I. Sharpley lifted the meetings ban and thousands upon thousands of Denverites filled the streets in jubilant celebration. Not surprisingly, the numbers for new infections began creeping up again, even as the city leaders kept telling the public that the worst was over. On November 21, Sharpley promised that in the course of one week, the death rate would return to normal.

It didn’t. On November 22, 18 people died of the disease, and with hundreds of new cases daily, the city reinstated closures for the movies, theaters, and other entertainment venues. Then, on November 23, theater and other entertainment venue owners marched to the Mayor’s office, protesting – not unreasonably – that the closures were unfair and not effective since people kept congregating in stores, which remained open all this time.

The protesters “won,” and the closure order was quickly reversed. Again.

The next was the masks debacle. Starting November 25, the residents were ordered to wear gauze face masks in churches, stores, theaters, elevators, at workplaces, doctor’s offices, and any gatherings, indoor or outdoor. Masks were also made mandatory for anyone serving the public.

There were only 3 problems. There weren’t nearly enough masks. The public ignored the order. And enforcement was impossible. The Mayor summed it up perfectly well by saying that “it would take half the population to make the other half wear masks,” and the order was revised. This time, the city only recommended the public wear masks in crowded places and streetcars.

That, however, enraged conductors. As workers serving the public, they had to wear uncomfortable masks while their patrons didn’t. A strike seemed inevitable until the Mayor revised that order, as well. A few days later, on November 30, the masks order was scrapped altogether.

By the end of November, the disease had mostly run its course, although there were still new infections and deaths in December as well as January 1919, with some new cases lingering until spring. On January 3 1919, Denver recorded the losses:12,718 infections and 1,218 resulting deaths. In a city of 268,000 at the time, it means 586 people per 100,000 lost their lives. Denver fared worse than most other cities of its size.

Why did it happen?

Were the city leaders incompetent? No. They did a lot of things right. Things could’ve gotten much worse. The city of Pittsburgh, for example, lost 807 people per 100,000.

There is one possible answer from Suzy Riding, a tour guide for Fort Collins’ Magic Bus Tours.

Ms. Riding is referring to Fort Collins, a city some 60 miles from Denver, but every word could apply to Denver itself, as well as hundreds of other municipalities across the U.S. that had to fight a vicious, unknown, and invisible enemy. And it wasn’t just a virus they were fighting, but also immense pressure from business interests. And every time they relaxed the rules, more people would get sick, and many of them would die. Inevitably.

But there was also something else.

Here is a quote from Municipal Facts, a Denver monthly magazine.

For some reason, even the most enlightened citizens will not take the influenza epidemic seriously. They know that it is the most widespread epidemic that has ever visited America. They know the disease is a deadly menace and snuffs out life almost before the victim realizes he is ill. Yet when health officers try to impress upon people the necessity of following essential rules and regulations, the average citizen simply refuses to heed these admonitions. Obviously, it is impossible to arrest the entire citizenship of the city and this is what health authorities would have to do if they attempted to enforce rules to the letter.

When you watch the protest news from around the country and read conspiracy tweets about how COVID-19 is “just like a flu” — doesn’t it sound too familiar?

To all the “re-openers” out there

COVID-19 hasn’t run its course yet; that much is clear.

This flattening of the curve we’re currently witnessing in some parts of the nation is just that – the flattening. It’s not the end of the disease. If we provide the bodies, the virus will keep thriving. It won’t help the economy one bit. It’ll only make things worse for people and the economy.

The question is not even how much you value a human life. What so many people fail to understand is that the sick and the dead don’t work — any which way you look at it. Their family members can, but scared and grieving people are hardly very productive.

The second, third, and who knows how many new waves of the pandemic will overwhelm and might break our already fragile healthcare system. That means even more deaths and not only from the coronavirus. Heart attacks, cancers, strokes, and dozens of other life-threatening diseases don’t take a back seat because of a pandemic. Even today New York hospitals are treating coronavirus patients almost exclusively. Second or third wave? Oh brother!

If you don’t want things to get worse, you can’t re-open America just because:

There is no possible model or scenario when it will be fine. It won’t.

You can’t re-open America until:

None of these conditions is being met so far.

Don’t trust anyone or anything that contradicts common sense

It’s obvious that politicians are starting to crack regardless of their party affiliation. To me it means one thing only.

We should keep staying home whenever we can, while practicing strict social distancing when we can’t, even if our mayor or governor says it’s OK now and you can go out.

Because it’s not OK, and you can’t go out if you don’t want to become a statistic. Your elected officials are currently under the most tremendous pressure of their lives.

You might feel, especially if you’re young and healthy, that this disease can’t hurt you much.

Hillel says, “If I am not for myself, who will be for me? But if I am only for myself, who am I?” Just think about it: when will you have a better chance to look out for the community by taking care of yourself?

We will get the economy up and running when the time is right. We’re America! All that drivel about the cure being “worse than the disease” is garbage. We just need to do our part and play it safe.

Spanish flu didn’t end us. It gave way to the Roaring Twenties. Let’s keep that in mind.

NB: While researching this article I sometimes had to reconcile some contradicting statements and data (which happens more often than writers and even historians would care to admit). Hopefully, I’ve got it (at least mostly) right. Here are the sources: