For a long time, the 40,000-mile Hawaiian Airlines credit card offer with waived annual fee was only available to Hawaiian residents. Not only is it 5,000 miles more than a regular 35,000-mile offer, but it also waives the $89 annual fee for the first year and requires a lower $1,000 spending requirement (v. $3,000) in the first 3 months. This offer is now public.

I don’t know how long the link has been available, but when I checked a couple of months ago, it was not. In terms of the “limited time,” I’ve seen this offer having been resurrected over and over, but, as I’ve mentioned before, you couldn’t apply if you didn’t live in Hawaii. This limitation is now gone (at least, I couldn’t find any language in the small print that would disqualify non-Hawaiian residents). The expiration date is April 30, so if you want this card, I would apply ASAP, because who knows?

More links in case the first one stops working:

One roundtrip flight between North America and Hawaii costs 40,000 miles, although as a Hawaiian credit card holder, you get 5,000 miles off per round trip. That’s if you find SuperSaver award space, which can be problematic during the peak travel time.

35,000 miles is a good, but not the best value for flights to Hawaii. Korean miles offer a much better rate on Delta at 25,000 per round trip, and British Avios offer as little as 24,000 miles per round trip from the West Coast.

If you’d rather be in First (Duh!), finding that SuperSaver award space turns into an adventure, especially on A330 routes where Hawaiian flies very comfortable lie-flat seats. If you’re lucky,  you’ll spend all your 40,000-mile bonus for a one-way ticket, which is not bad for, say, an 11-hour long flight between New York and Honolulu. 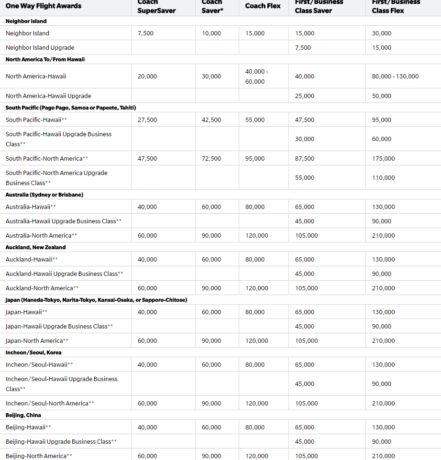 You can also redeem HawaiianMiles on a few remaining Hawaiian partner airlines. “Remaining” because Hawaiian mileage redemption partnerships with American, Delta, and ANA are now a thing of past.

Are there any sweet deals there? No. But there is one good value on Virgin Atlantic: 60,000 miles in Economy and 125,000 miles in Business per roundtrip between the U.S. East Coast and the UK. Considering there are no fuel surcharges and the Delta’s never ending devaluation of its “non-existing” award chart, that’s quite decent, actually.

Hawaiian has recently made a codeshare deal with Japan Airlines, promising a closer contact, which would evnetually include redemption options. It will be interesting to see their redemption levels, but I expect at least 200,000 miles in Business Class between North America and Japan based on their current values.

Oh, you can also transfer HawaiianMiles to Hilton Honors at 1.5x, but seriously …

Why not use the 50000-Hawaiian Airlines credit card offer trick?

You should still be able to get the 50,000-mile Hawaiian Airlines credit card offer, and there is no reason not to, as long as you’re OK with the $89 annual fee (not waived) and the $3,000 spending requirement. Just go to Hawaiianairlines.com and dummy-book a revenue flight. The steps-by-steps are here.

So, what do you think? Worth getting or not?