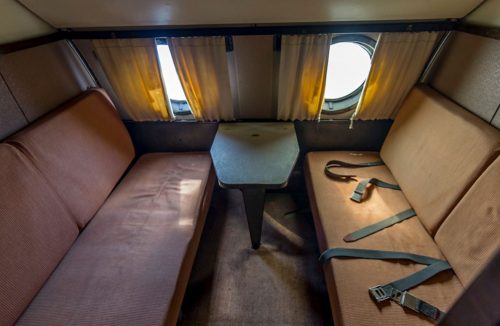 If you, like most plane geeks, believe that the era of lie-flat airline seats was ushered in by British Airways in the late 1990s, I don’t blame you. British Airways indeed started the whirlwind rush to transition the front cabin from cradle seats to flat beds.

Still, technically speaking, British Airways was not the first airline in the modern chapter of mass air transportation to treat its well-paying customers to a good night’s sleep. We would have to go 60 years back and step into a completely different world to trace the first lie-flat seats in the sky.

Meet TU-114 – a combination of intense beauty and performance beast 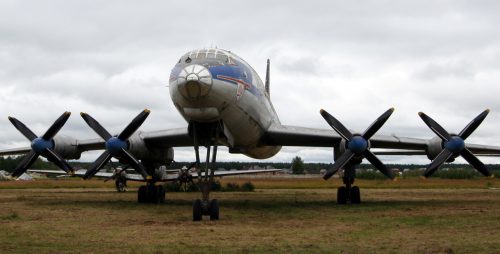 In September 1959, a new airliner brought Nikita Khrushchev and his entourage on the first visit to the United States. The plane was so new in fact, it had only flown a few times previously, and at the time was still considered experimental. While the state security agencies were against using the new plane for carrying the Soviet premier to such a faraway destination, Khrushchev was adamant he wouldn’t be seen arriving in the U.S. in a small and unassuming IL-14. Andrei Tupolev, the head of the namesake Tupolev Design Bureau who 20 years prior had been jailed and nearly shot by Stalin, knew the stakes better than anyone, and offered the boss his personal safety assurances by putting his son Alexei on the flight. 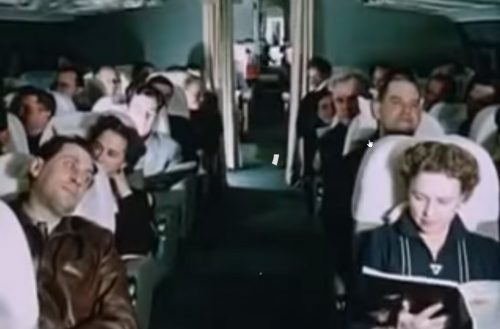 A still from a Soviet TU-114 commercial: the front cabin 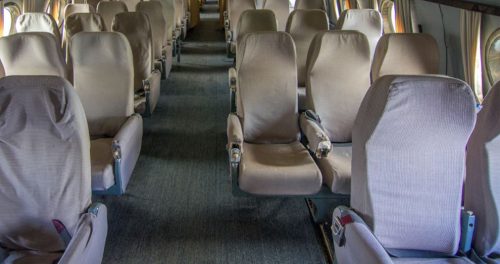 Everything went without a hitch up until disembarking when, per Wikipedia, “the ground crew found that the aircraft was so large and its landing gear so tall that they had no passenger steps high enough to reach the forward hatch. Khrushchev and his party were obliged to use the aircraft’s own emergency escape ladder.” Other than that slightly embarrassing moment, TU-114 was very well received. And how could it not have been? It was a fast, fuel-efficient, and simply magnificent machine with its bomber-like glass nose (the airliner was modified from the TU-95 “Bear” bomber). TU-114 also proved to be exceptionally safe with only one fatal incident in 15 years of regular service.

TU-114 went on flying long and extra long hauls to dozens of domestic and international destinations, including Novosibirsk, Khabarovsk, Paris, Havana, Montreal, and Tokyo among others. 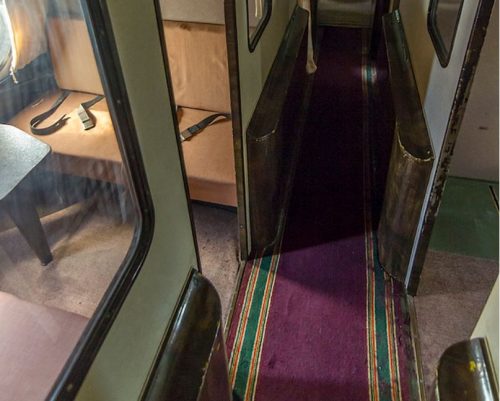 One of the TU-114 train-like sleeping compartments

While, strictly speaking, not a widebody, TU-114 was only 20% narrower than the 767. It was a large turboprop that could carry around 170 people and could develop speeds of 540 miles per hour. This speed makes it the fastest propeller-driven aircraft in the world even up to this day – unfortunately, passengers had to endure terrible noise and vibrations, especially those seated in the dining lounge in the midsection. Yes, there was a dining lounge aboard TU-114, but you wouldn’t want to sit right above the wings, which is why tickets to the restaurant section were sold last. 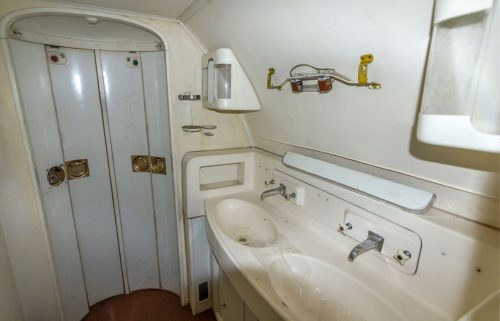 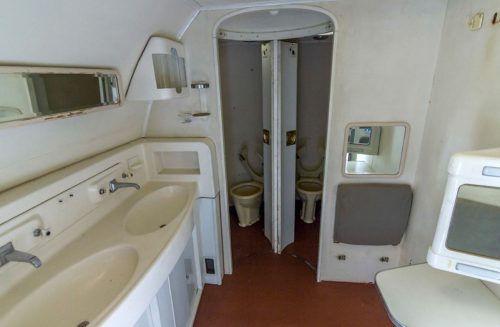 The sleeping compartments were located between the dining lounge and the back main cabin and were modeled after train sleeping compartments. If you want to compare them with modern-day airline cabins, think the Etihad First Apartment layout, without modern luxuries, but equipped with 3 sleeping berths, a table, and a lamp. No IFE, though. 🙂 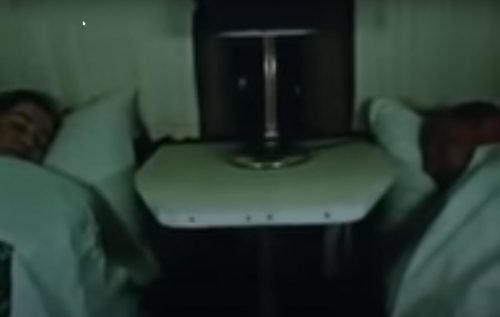 A still from the TV commercial: 2 Lower bunks in a TU-114 sleeping compartment …

… and the upper bunk: 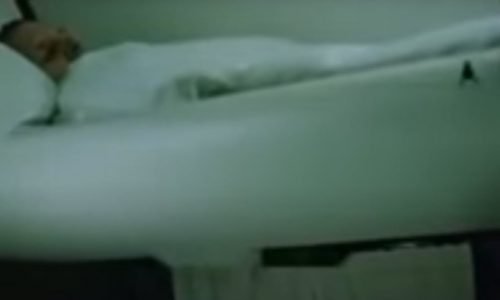 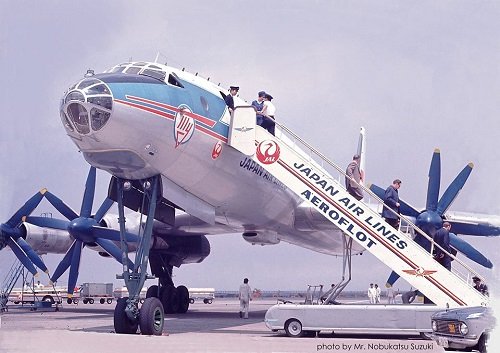 The First TU-114 codeshare flight between Aeroflot and Japan Airlines took off on April 19, 1967

For 2 years from 1967 to 1969, Japan Airlines and Aeroflot were running codeshare flights between Moscow and Tokyo. 4 TU-114s were retrofitted into 2-class cabin aircraft carrying 105 passengers. Japan Airlines describes the resulting experience, which I can only think of as yummy! 🙂

So, how much did that lie-flat goodness cost?

The funny thing about the Soviet non-market economy is there was no competition. Aeroflot ruled the skies. There were no sales, no discounts, no regional, seasonal, or any other price discrepancies. Finally, there was one class of service on domestic flights, although internationally tickets on TU-114 were sold in 2 classes. That meant if you were really lucky (or knew just the right people) you could get a lie-flat bed in a sleeping compartment for the price of a coach seat. That, by the way, wasn’t the case with train sleeper compartments, which were always pricier than regular seats/bunks. 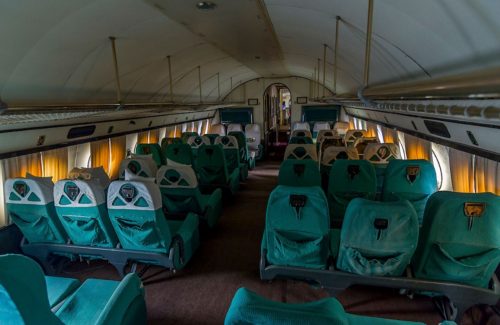 The air fares were established by the government and were mostly based on the distance. One-way tickets cost from 12 rubles for an ultra short haul, like a 1-hour flight between Moscow and Ivanovo, all the way to 134 rubles to a 10.5-hour flight to Vladivostok. To put these numbers in prospective, an average salary for a specialist in the 1960s and 1970s ranged between 120 and 170 rubles. So air transportation wasn’t cheap, to say the least.

The death of the first lie-flat seats

Despite the often prohibitive costs, by the end of the 60s air travel had gained so much popularity that tickets for the most popular destinations got hard to come by. Since Aeroflot didn’t get any extra revenue from selling sleeping beds, it removed the sleeping compartments in favor of regular seats so as to squeeze more people in. By the end of 1969, the capacity was increased to 225 passengers, but the lie-flat seats onboard of TU-114 were gone.

By the mid-70s the reign of TU-114s in the Soviet skies came to an end, as well. The industry leaders believed that the future was in jets, so the long-range turboprops were deemed useless. They were replaced by IL-62s, which weren’t nearly as fuel-efficient or sexy-looking, but were much more maneuverable and offered better comfort.

Today only the pros and plane aficionados remember TU-114, but at least we know that British Airways wasn’t really the first. 🙂