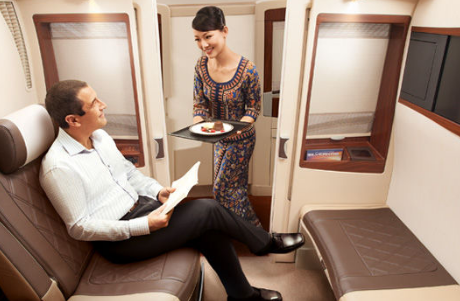 What does it even mean? How can you “game” Singapore suites routes? You can by old-fashion way. Extend your search beyond the points A and B and you shall find a gem. Maybe.

But first, remember when I said the day before yesterday how there are plenty of Singapore First Suite award space between New York and Singapore via Frankfurt? I also mentioned that there was some sporadic availability for Los Angeles flights via Tokyo. And I also informed that routing to Singapore from San Francisco via Hong Kong gets rid of the fuel surcharges.

Well, there is some bad news, some good news, some mixed news, and some awesome news! Where to begin?

All availability from LAX to SIN via NRT is gone for now. Although, I’m sure if you examine the schedule with a fine-tooth comb, you will find something.

Then I thought, OK so there is no awards from LA to Singapore left, but how about Tokyo? Can it be that it’s the NRT–SIN segment that holds us down? Unfortunately no. I didn’t find a single available date, but while I was checking, I found something else. 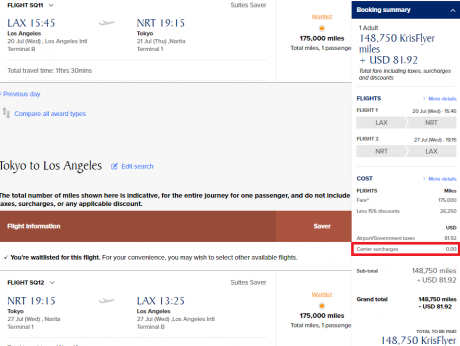 Are you seeing what I’m seeing? No, not that the flight is unavailable (waitlisted), that’s given, but do you see what is not there? Fuel surcharges! There is none! In my previous post I showed you that there is no YQ between San Francisco and Hong Kong, but there are also no scamcharges to Tokyo, as well! So when you do find availability between LA and Tokyo (provided you want to visit Japan, of course), you can have a respectable 10-hour ride in one of the best First Class Suites in the world and save $240 in the process.

We know that Singapore used to add fuel surcharge to both Hong Kong and Tokyo. We also know that it reduced them somewhat last year. But it’s good to know that it got rid of it entirely. That really is a good news!

But you know me. This discovery got me thinking. What if we tried to stretch it? What if we could get us to or from Hong Kong the other way via Tokyo and Singapore? Would it eliminate the fuel surcharges?

Just so suspense doesn’t kill you — no, it won’t. If you travel to or from Hong Kong via Tokio, you will pay the same $240 YQ one way. But this is where it gets good and weird at the same time.

I decided to use the Award.Flights search tool, which is rapidly becoming my go-to free award search tool, as it can quite accurately “see” oneworld and Star inventories.

See, there is no First Suite availability between LA and Singapore in the first half of April 2017.

But try to search for LA and Hong Kong, and you will see a different picture. 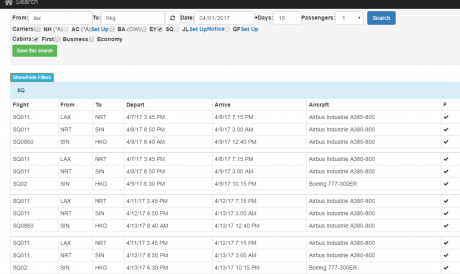 What? Wait, so there are no Saver awards between point A and point B, but as soon as you add point C, they magically appear out of thin air? What is this, a joke or a glitch?

Neither, it seems legit. I checked one of these two available dates (there are 2, not 4 because the difference is only in the SIN layover time) on the Singapore website. The Singapore search engine is fine, but can only do one date at a time. First, I tried LAX-SIN. 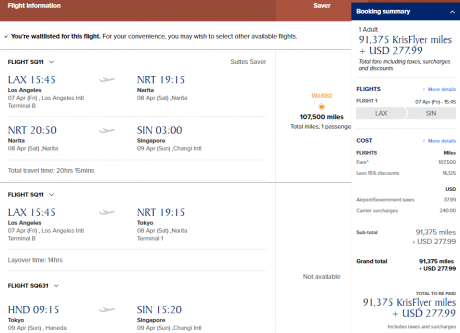 And got the waitlisting, as expected.

Next I tried the search for LAX-SIN-HKG, and what do you know! There is not one, but two flights available. I know the image is small, so click to enlarge it. 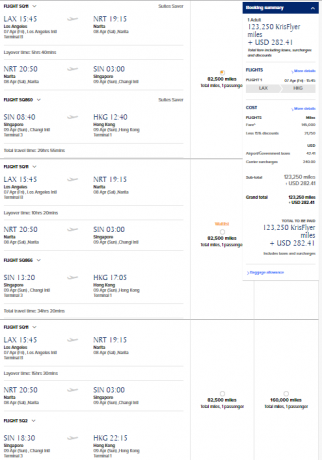 Can we go one step further and check availability for two people? Sure we can and it’s still there! 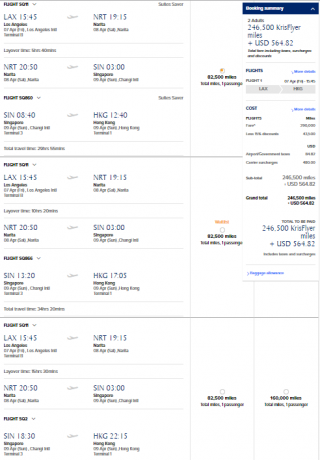 Let’s sum it up briefly.

So now you can have three Singapore First Suite segments instead of two. Awesome, right? Well, if you do click on this picture, you’ll see this is not all good news. The required mileage has increased by almost 30,000 miles, while that flight between Singapore and Hong Kong clocks at only 4 hours. Would you pay 30,000 UR, MR, TU or 24,000 SPG points for four hours in a Singapore First Suite?

The answer, as always, it depends. Let me run you a few scenarios when it might make sense.

If you live on the East Coast, you’re golden. Not only because there are still a lot of award availability from New York to Singapore via Frankfurt next April and May, but also because you can do the same thing by adding Hong Kong for a flight from the East Coast. But first, let’s find a date when a JFK-SIN flight is unavailable. Which is not that hard, I know. 🙁 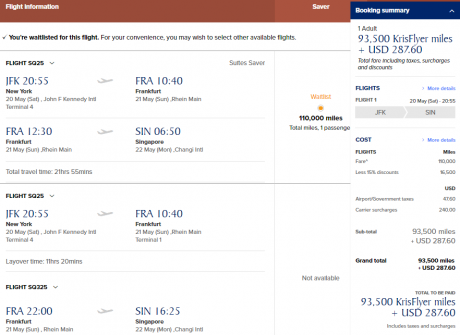 And then let’s try and add Hong Kong into the mix. 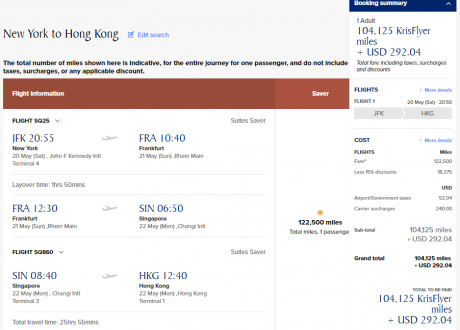 Let’s see what we get. The regular First Suite cost between New York and Singapore after the 15% web discount is 93,500 miles. So for slightly more than 10,000 miles you get four more hours of play, and gain access to the Singapore Private Room at SIN airport. You know what? Unless you’re actually flying to Singapore, this is a better deal on more than one level. And for just $100 you can add a stopover in Singapore anyway (free with a round-trip flight).

You can’t fly from New York to Tokyo on one ticket, because that would be backtracking. But you can fly all the way down, and by down, I mean down under, to Sydney or Auckland. 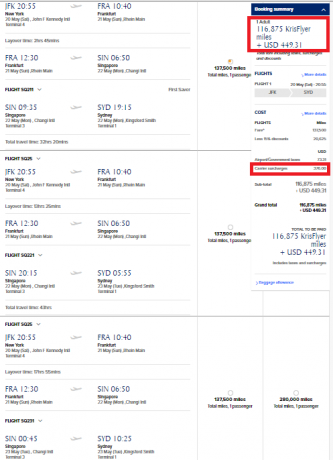 This flight costs 23,000 miles more, and the fuel surcharge iss higher by $136. Still a reasonable price for what you’re getting — an extra 7.5 hours in a Suite. In the very least it beats almost every first class award level to Australia (not that there are many left anyway).

So, here you go. Having more than one option is the most important thing in this hobby.