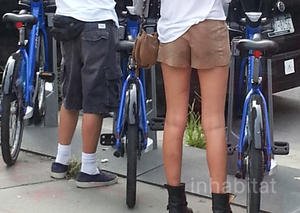 Don’t. Please! I live here, I drive here, and like most drivers in this town, I hate bicyclists! No, I am not a hateful person, but I hate that they won’t have a problem smashing into my car, let alone leaning on it, I hate that they perversely love riding against traffic, I hate that they don’t wear helmets and don’t give a flying duck about traffic lights or traffic rules in general. I hate that the moment they place their foot on the pedal of their bike, they have made me–a complete stranger–responsible for their own life and their safety.

And the answer is, New York City is inherently bad for bikers, and without costly and improbable investments in our infrastructure it will remain this way indefinitely. Unfortunately, our politicians are more fixated on environmentally-friendly sound bites than anything of a substance. As if throwing thousands of new bicyclists into the mix is somehow going to fix an already bad and growing problem.

Just because the Bike Share has made it to New York doesn’t mean it’s time to sing Hallelujah! We ain’t Europe. We are not even equipped to deal with our own two-wheeling knuckleheads, but in the very least, they know this city. They know the streets. They know tight spots, they know repair spots, and they know the detours. They are stupid, loud, obnoxious, and arrogant–well, not all but many–but they are LOCAL. You, strangers, don’t have that major benefit. You are much more likely to get hurt.

It is nice, of course, that New York is trying to become more tourist-friendly, but riding a bike in this town will make you wish you’d never come. Only some avenues on some blocks have separate bicycle lanes (almost none of our narrow streets with insane traffic do). On the north, the share stations end at Columbus Circle, which borders the southwestern edge of the Central Park. That’s far away from the Museum Mile. From there, it’s still subway or walking–and those are really best ways of exploring Manhattan. Nothing else comes even close. Bicycles the least of it.

But maybe you’re a budget traveler who hopes to save a few bucks with this program? Sorry, brother, but no soup. The daily cost of the rentals is almost $11! That’s more than four subway rides, and on top of that, there is a $4 penalty if you exceed a 30-min limit! As a comparison, the cost of a day pass in bike-friendlier cities like Paris and London is 2 and 3 bucks respectively. You’re not saving anything. The weekly pass is a slightly better deal for $25, but it’s still a lot compared to $15 for the London’s weekly pass or $10 for the Paris’.

If you believe that I’m just a prejudiced hater of “alternative” and “environmentally-friendly”  means of transportations, please allow me to give you another reason why you shouldn’t ride in NYC. Many of our streets are in worse conditions than in third-world countries. Riding in Manhattan is neither fast nor relaxing. If you’re coming here to explore New York rather than make an environmental statement, you will be extremely disappointed and stressed out trying to achieve that.

Just walk and take the subway when you have to. That’s what New Yorkers do. You will love it so much better!