I know I’m lagging way behind in my trip reports. First, I managed to catch a nasty bug in Thailand that just wouldn’t go away, and second, it’s a freaking tragedy when your day job interferes with your hobby. 🙂 Sorry about that.

This is a long post/ Just a fair warning.

Siem Reap: Angkor Wat and Other Wats, Day One

Siem Reap: Angkor Wat and Other Wats, Day Two, AM

If Angkor Wat is all about history and astonishingly intricate carvings, Ta Prohm is more about Mother Nature reclaiming what’s hers. It doesn’t mean there are no amazing carvings in Ta Prohm, but somehow, the carvings are not what really hit the eye. This is the site where you will see those eerie, mystical images you’ve seen somewhere before; the images of the jungles swallowing a city.

Useless Factoid: The producers of Lara Croft Tomb Raider had to pay $70,000 a day for the privilege of filming in Ta Prohm.

These ancient trees (they aren’t called strangling trees for nothing) with their huge, alien-like roots intertwined with the walls and doorways of Angkor ruins, are not only a source of endless awe and admiration; they are also a huge problem. The scientists working to preserve Angkor are scratching their heads trying to find the solution. The trees are slowly destroying what’s left of the temples by splitting the walls and cracking priceless carvings. When they grow old, or during rough weather, they collapse taking the chunks of delicate and vulnerable  structures with them. That’s exactly what happened in November 2013, when an uprooted tree damaged the Northern Entrance of Pre Khan.

The anquish of the scientists is moot though. No one is going to cut the trees. Tourists love the trees as much as they love the ruins. It’s not too hard to see why. 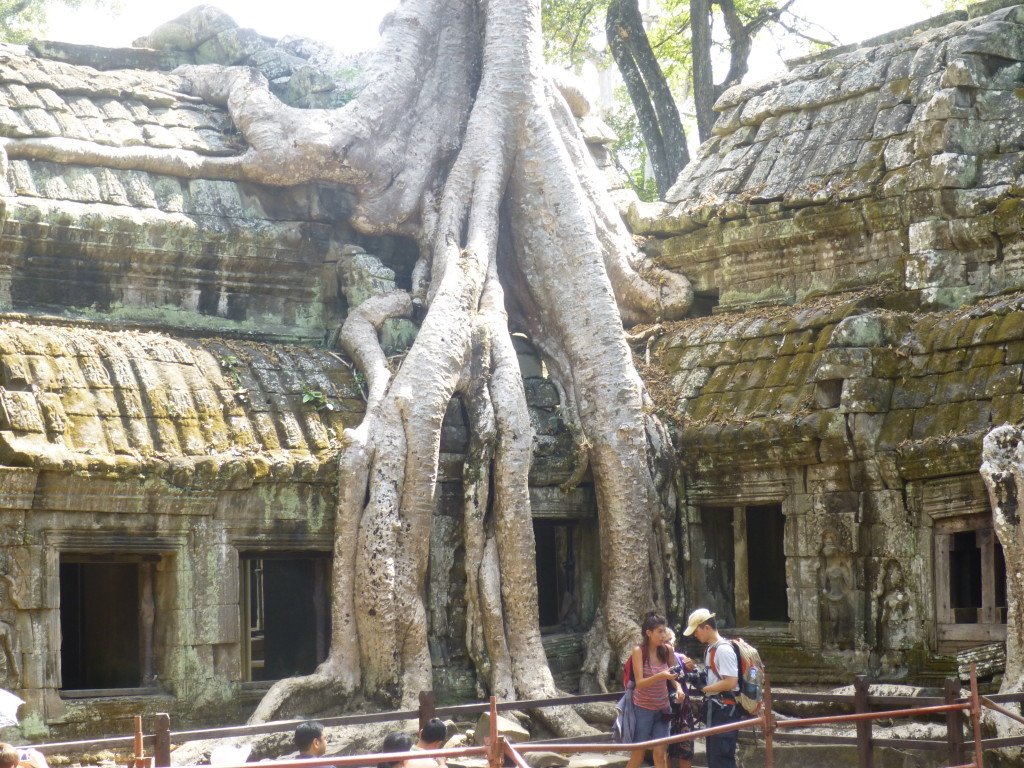 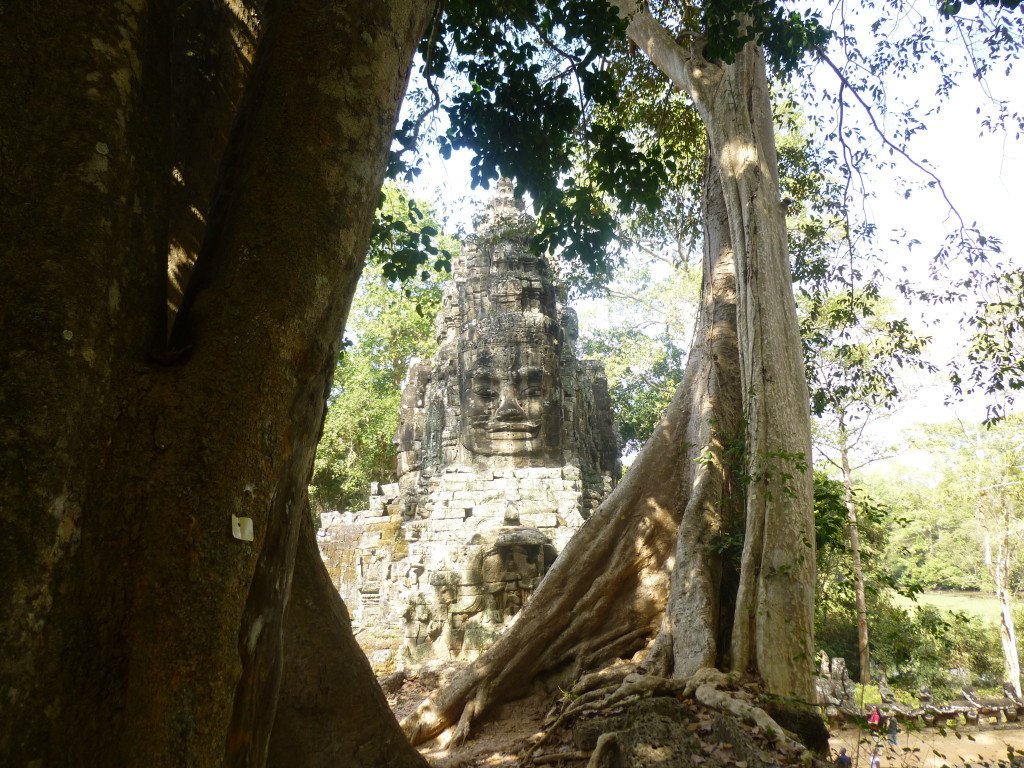 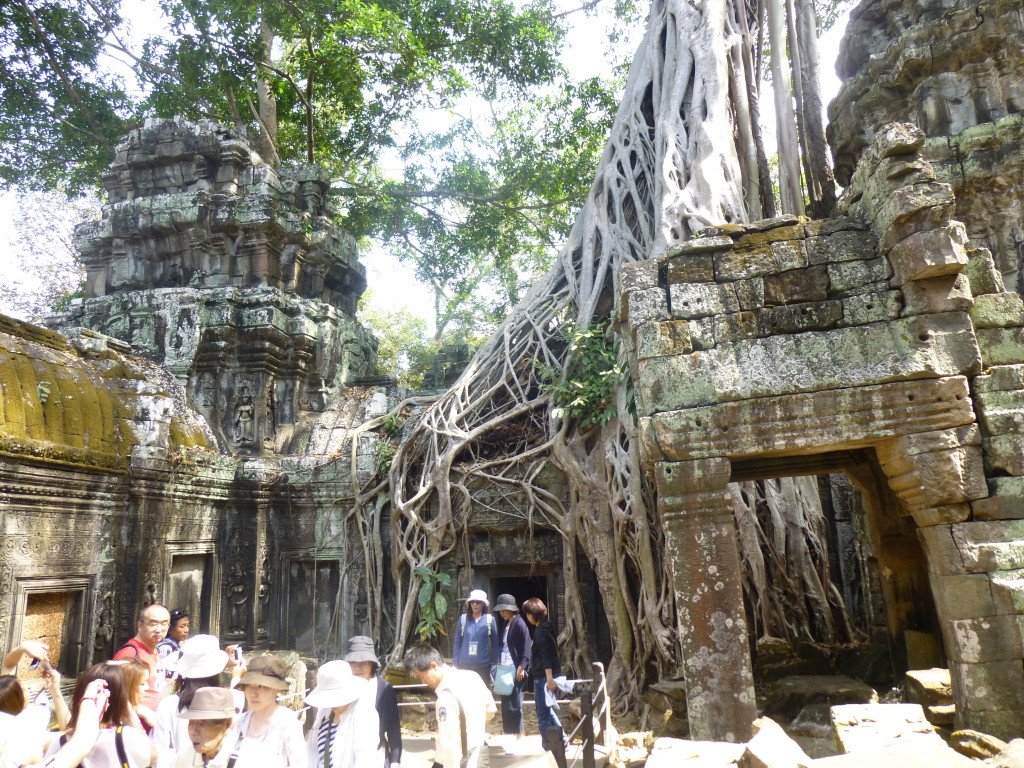 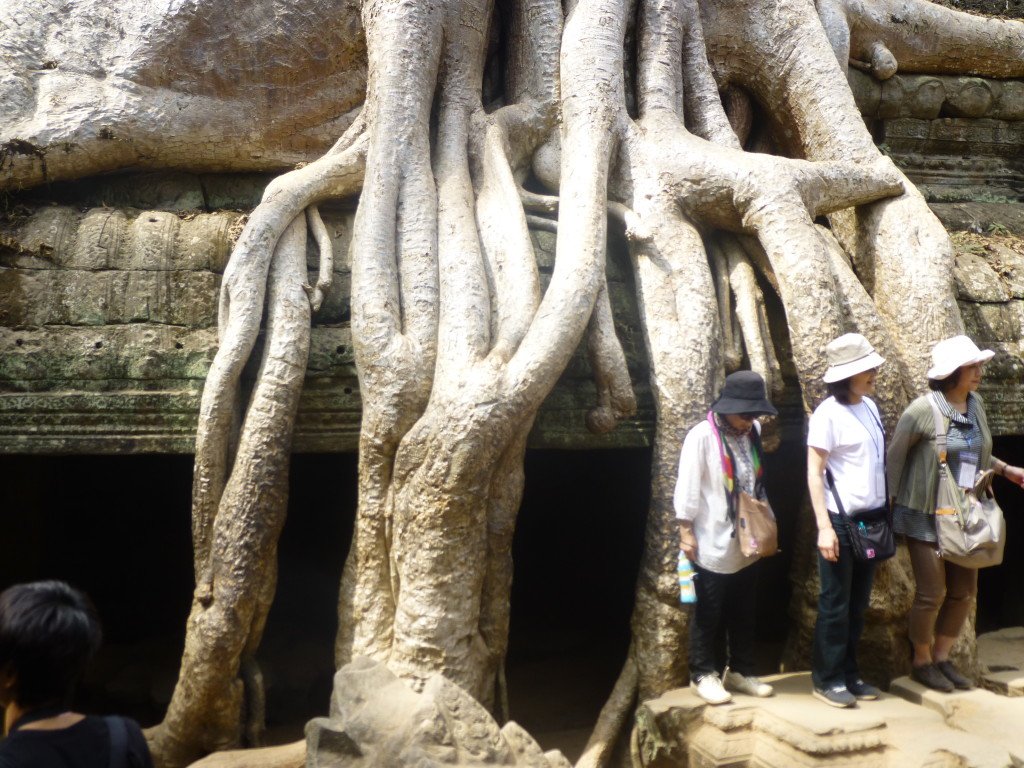 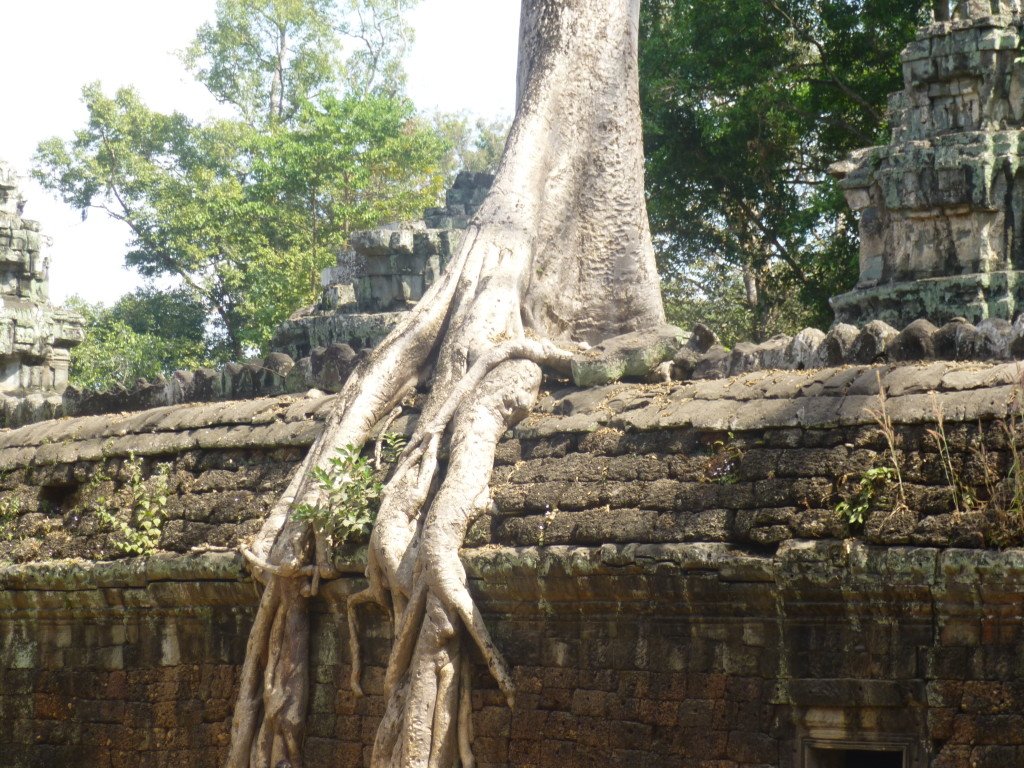 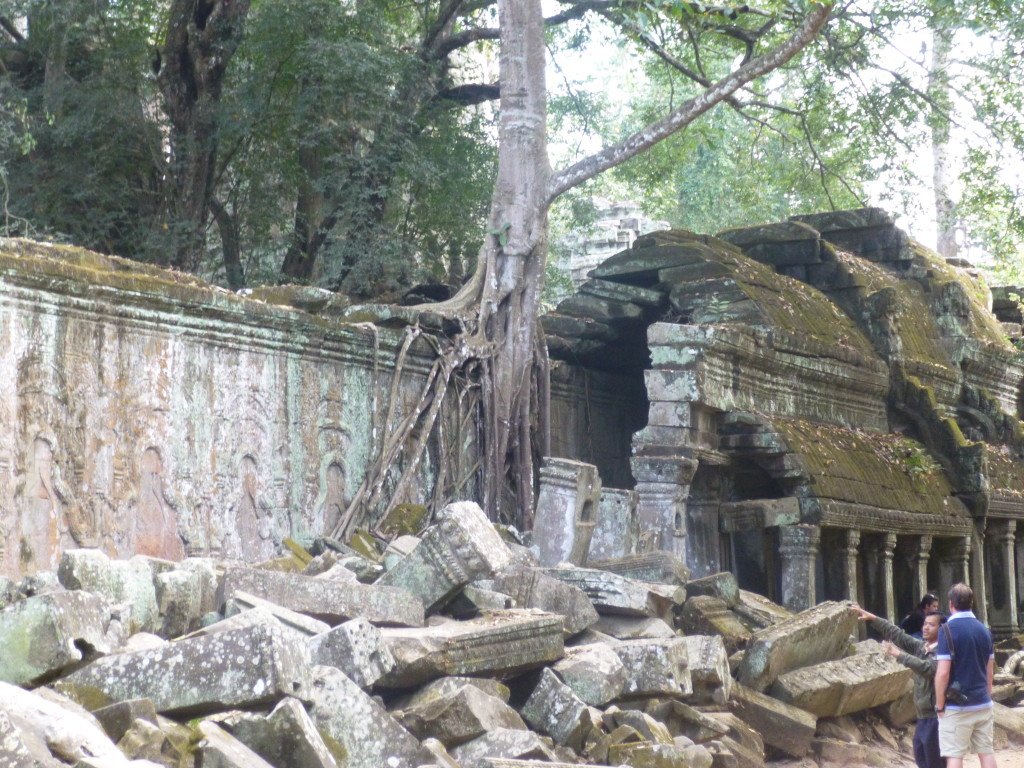 My own Tomb Raider moment. 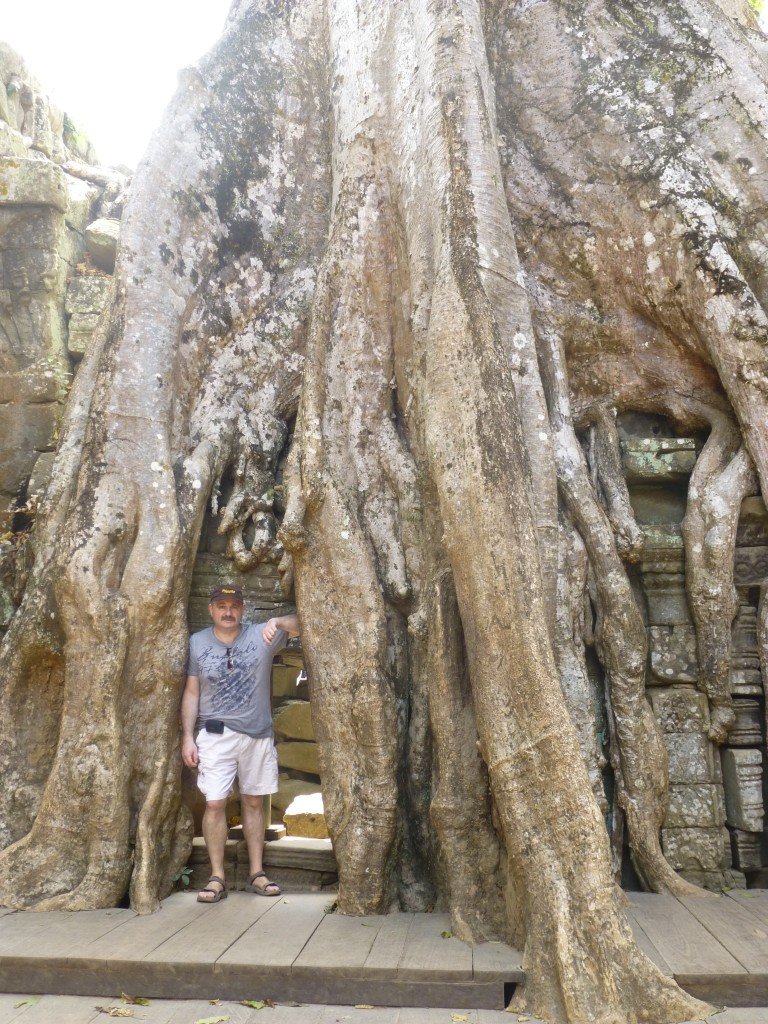 Tourists love to express their disdain for other tourists, who always pollute the view and get in the way of that perfect shot. Sometimes, however, a little human moment goes a long way. One of the most beautiful smiles on the face of a perfect stranger I’ve ever seen. 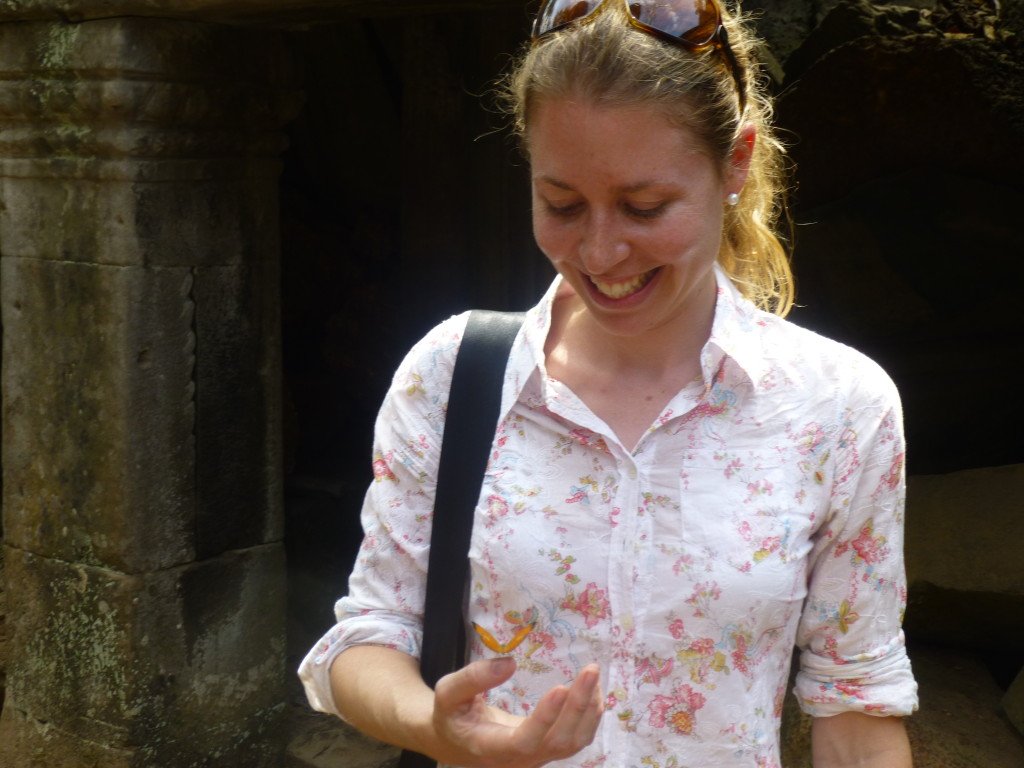 Here is an “ancient tablet” (sorry, can’t remember which temple) to help you educate yourself in terms of what you are not allowed to do. Soak it all in before climbing up. 🙂 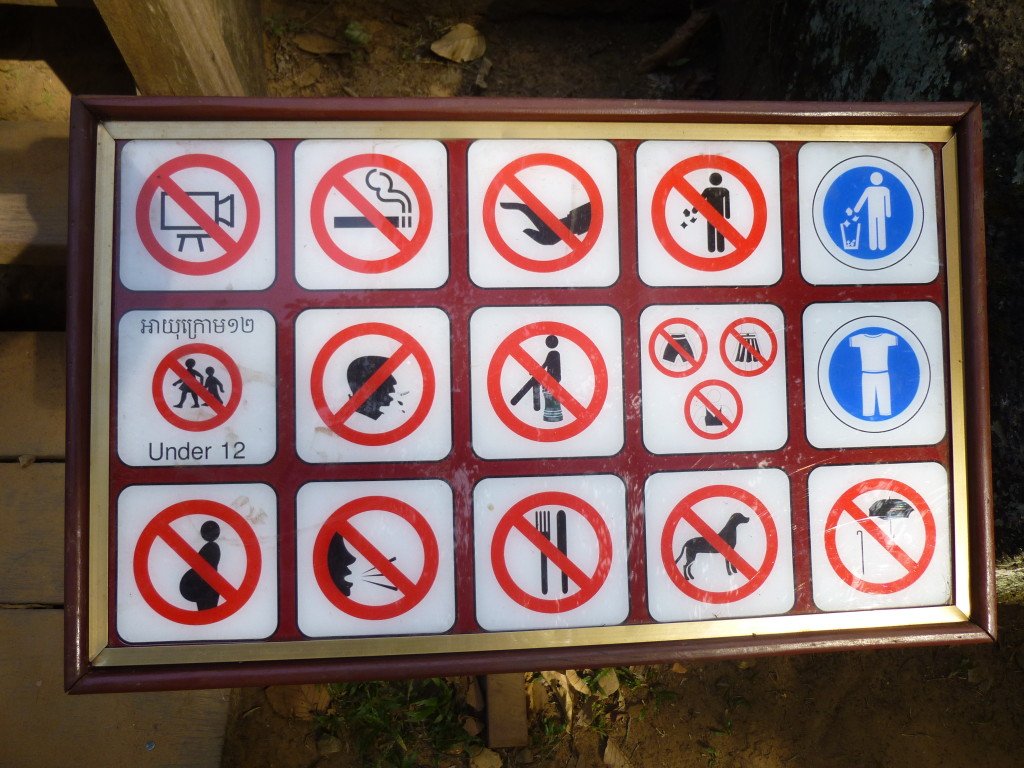 Angkor Thom houses two major temples, Baphuon and Bayon. Both are in much worse condition than Angkor Wat, which doesn’t mean they are in any way less fascinating. Both are mountain temples, with Baphuon being quite a steep climb.

One piece of logistics that needs to be remembered is that women must cover their legs before entering a temple. Some women carry light pants with them and change before coming in, but while there are bathrooms, markets and restaurants at the foot of some temples and complexes, there are none inside Angkor Thom. Wearing shorts is perfectly fine while exploring the grounds, but you will be stopped from climbing or entering a temple, and you’ll have to change in full view of the public or walk away. I’ve witnessed at least several incidents when women had to change right next to the entrance to Baphuon to the amusement of young guards (well, I can imagine, their job is quite boring, otherwise). Better plan ahead to avoid the embarrassment.

On the upside, despite what the sign says, it appears that men can wear anything they want. I’ve seen a few guys in short shorts, and the guards wouldn’t bat an eye. Talk about double standards…

Wait, did I say on the upside? Sorry ladies. I don’t make the rules. I only enjoy them. 🙂 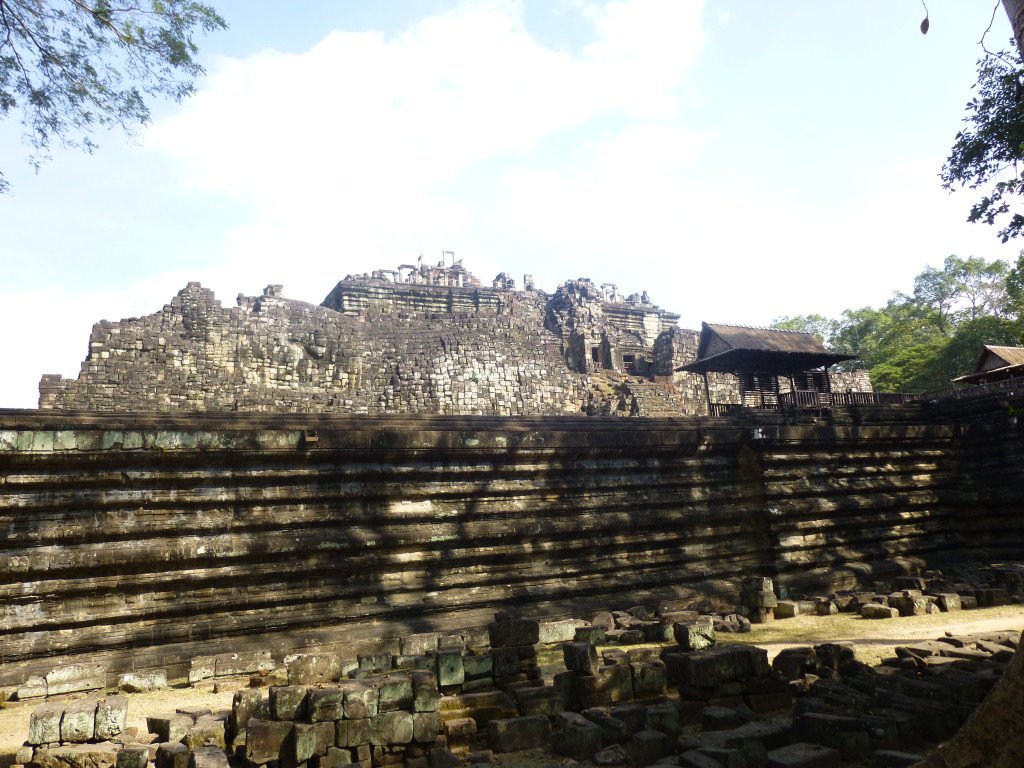 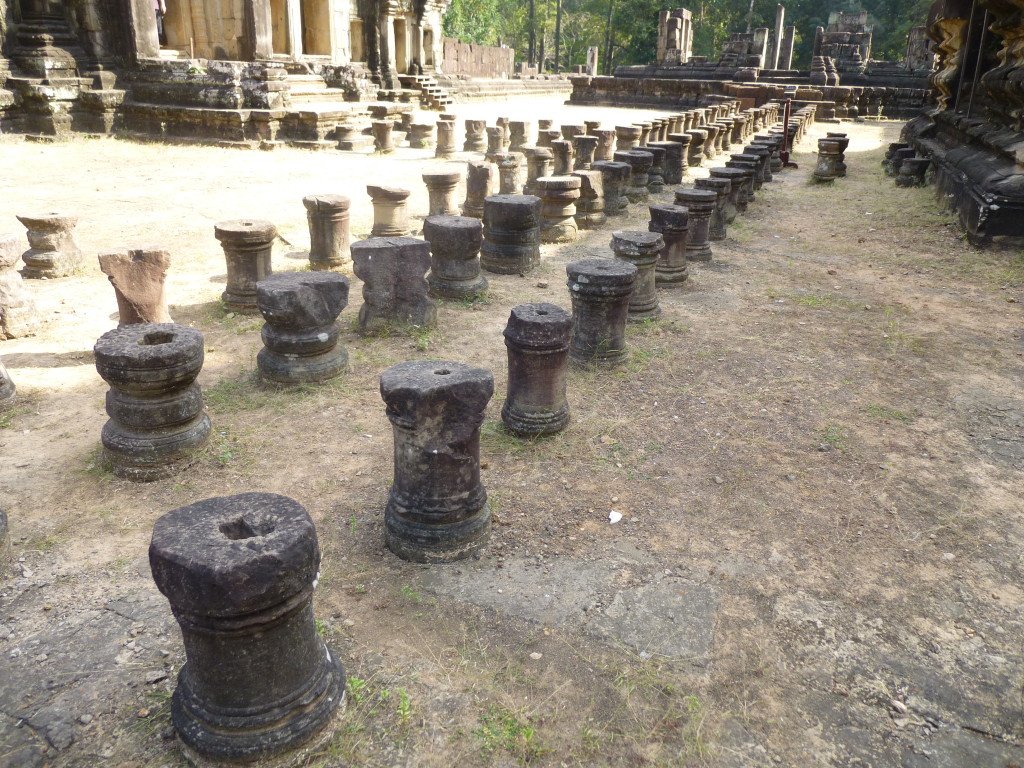 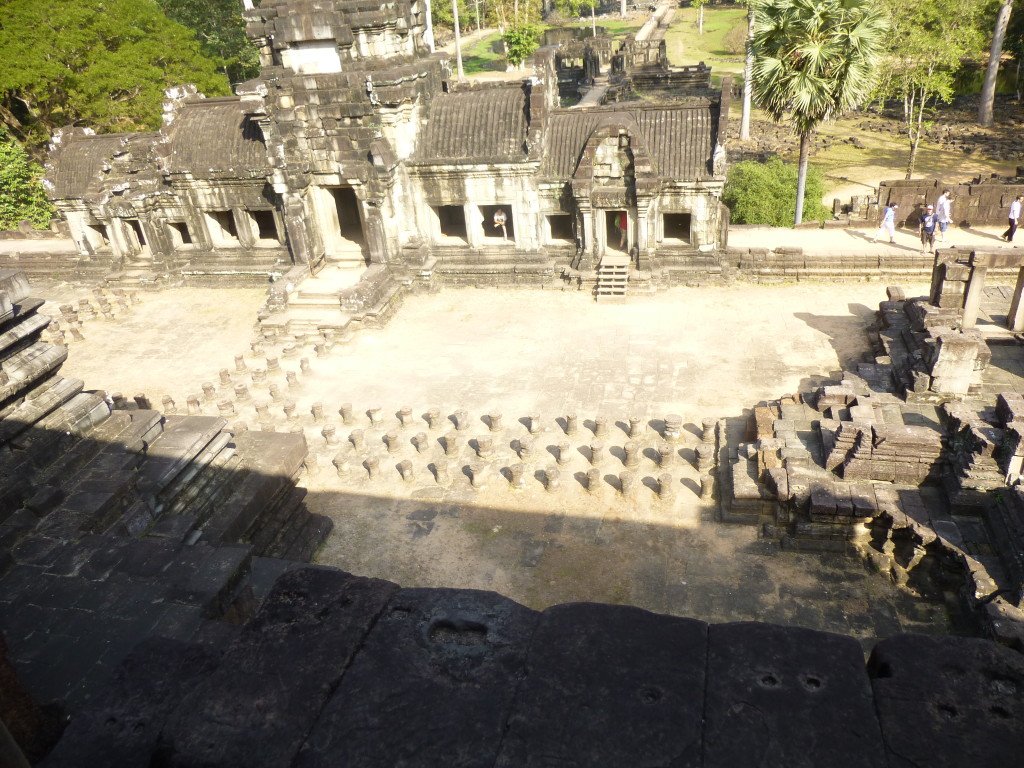 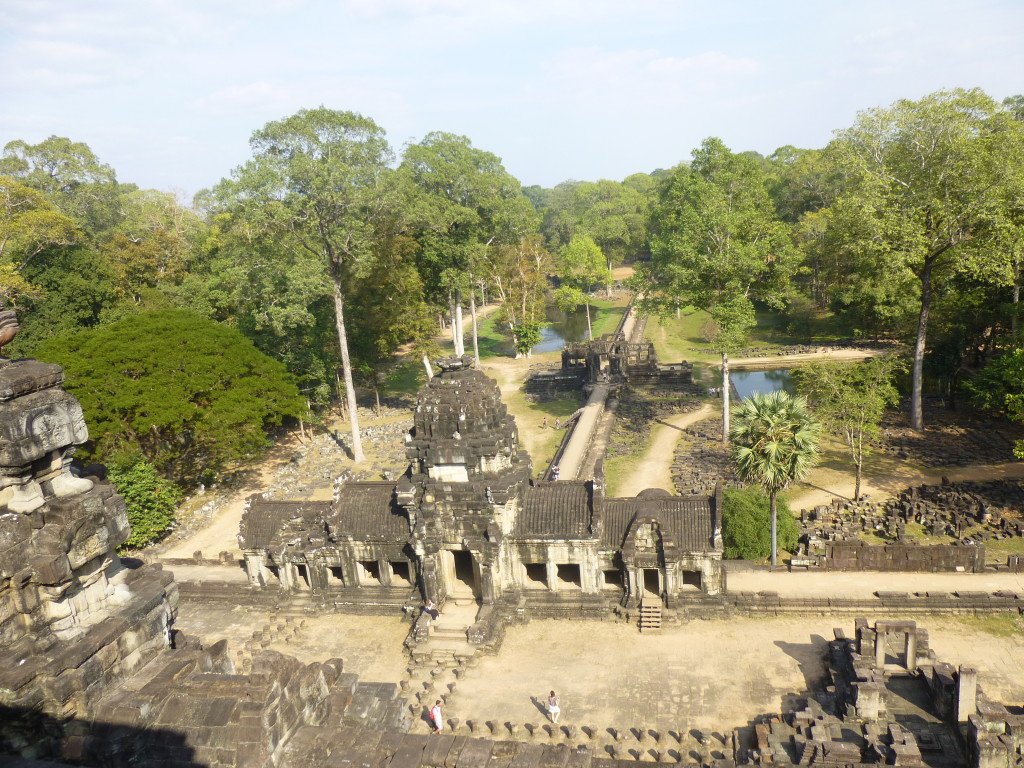 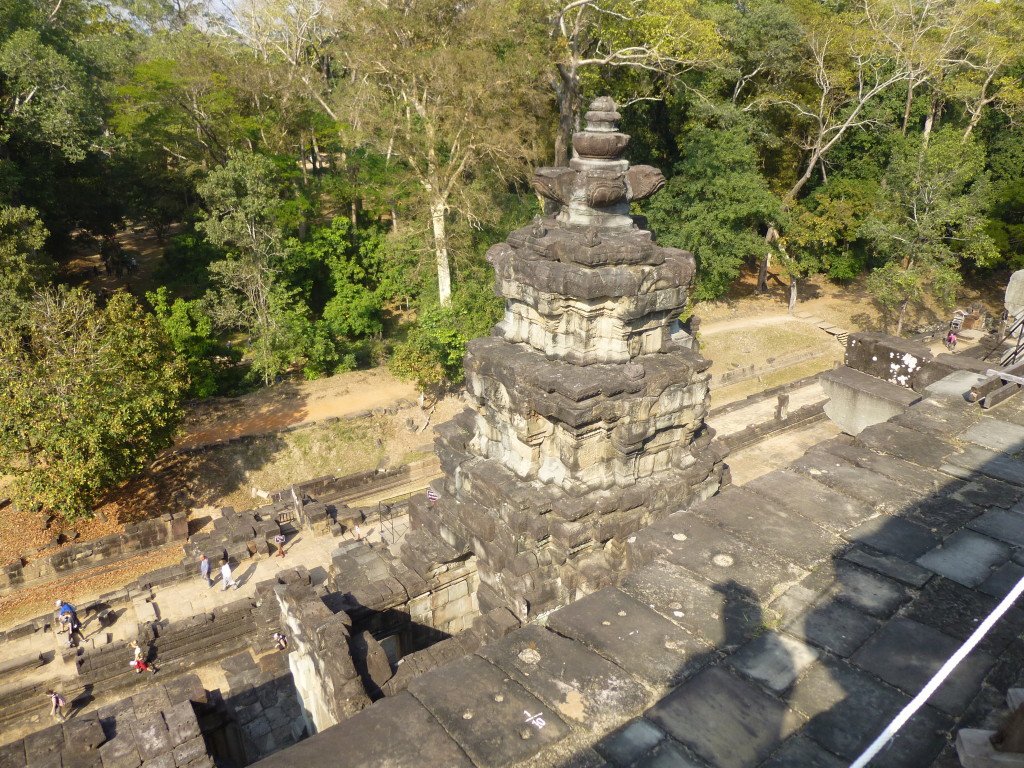 Bayon or the Temple of 216 Smiling Buddhas is absolutely astonishing! 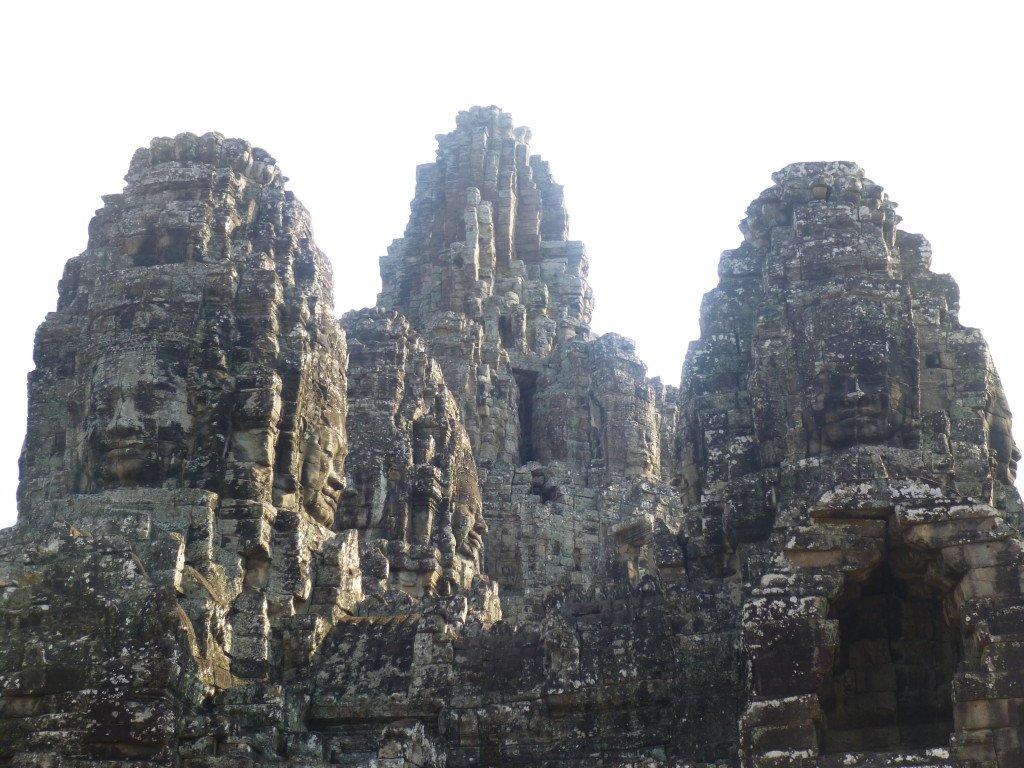 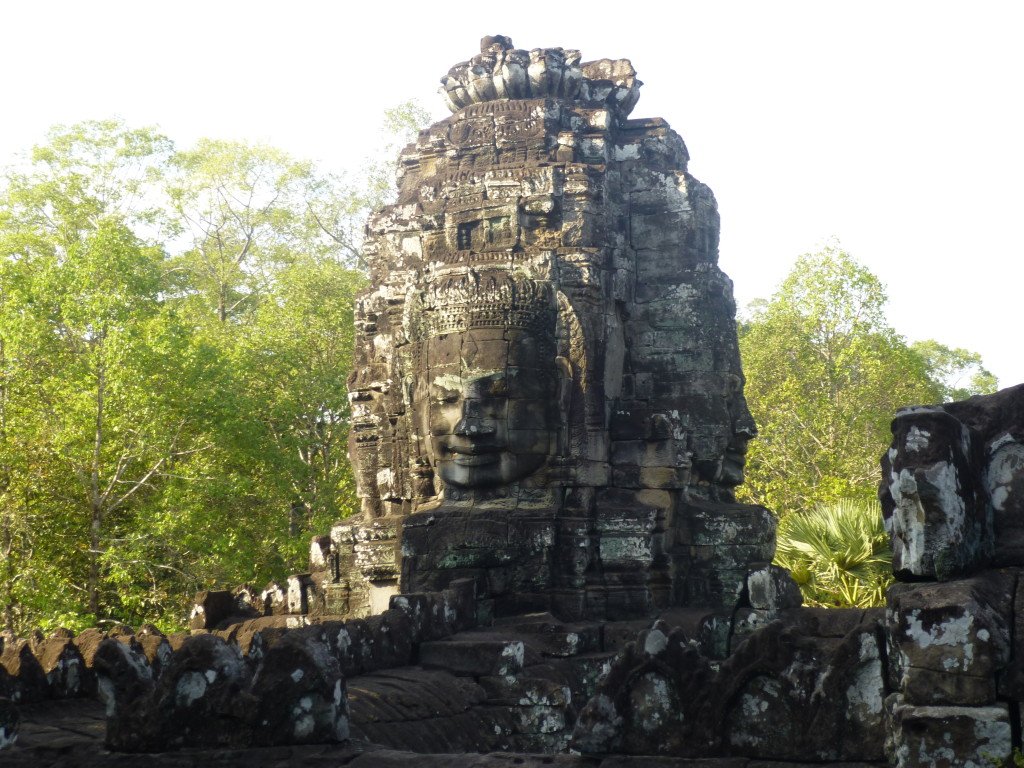 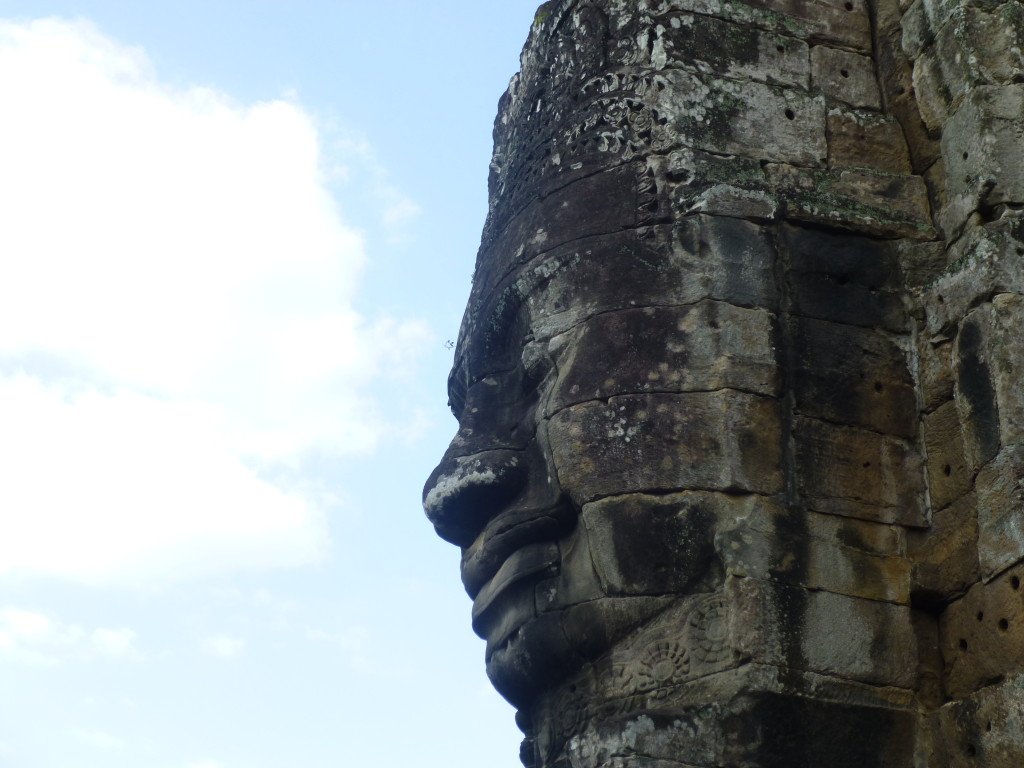 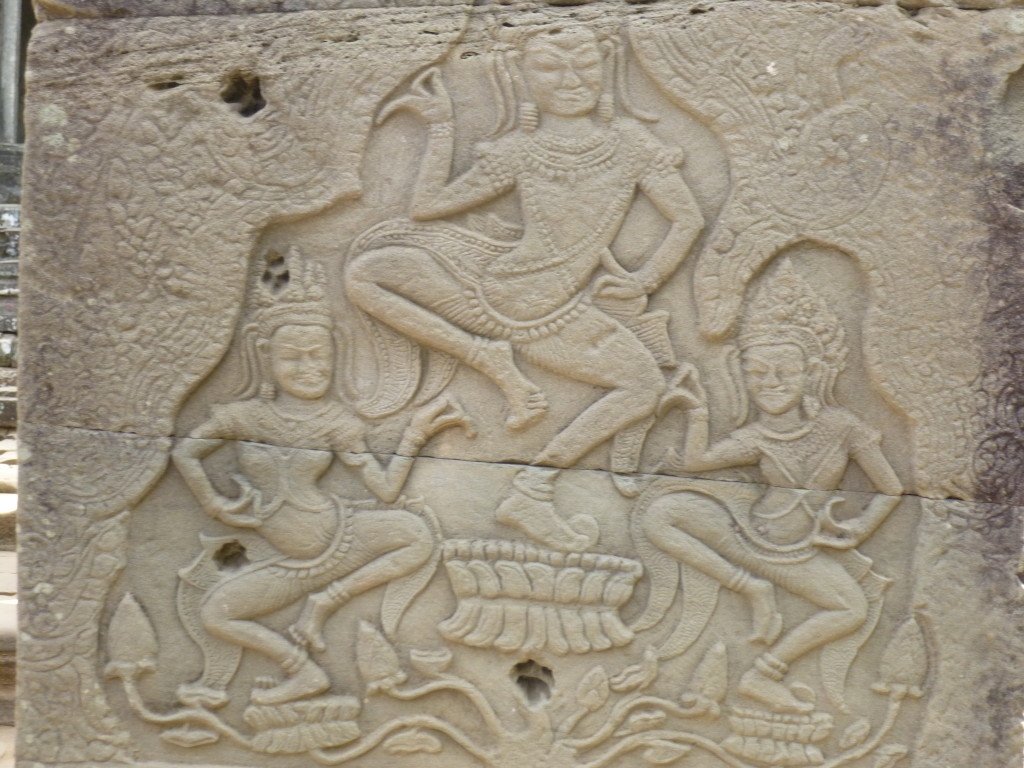 Next day (you don’t want to read another short post, so I will cover the next day here) I took a ride to Banteay Srei. It is a relatively long ride from Siem Reap, about an hour or so, but it was worth every minute and every penny, too. Banteay Srei is one of the smallest, but I believe it’s also the most beautiful temple of Angkor. It’s carved from pink sandstone, and the beauty of the carvings is absolutely phenomenal. This is the place where you will really be annoyed by other tourists simply because the place is so small, and there are so many of us. Getting a clean shot when everyone is trying to pose at the same spot is truly a challenge here, so I stopped trying–and fast. Take a look at these carvings and bas-reliefs and tell me they are anything but exquisite! 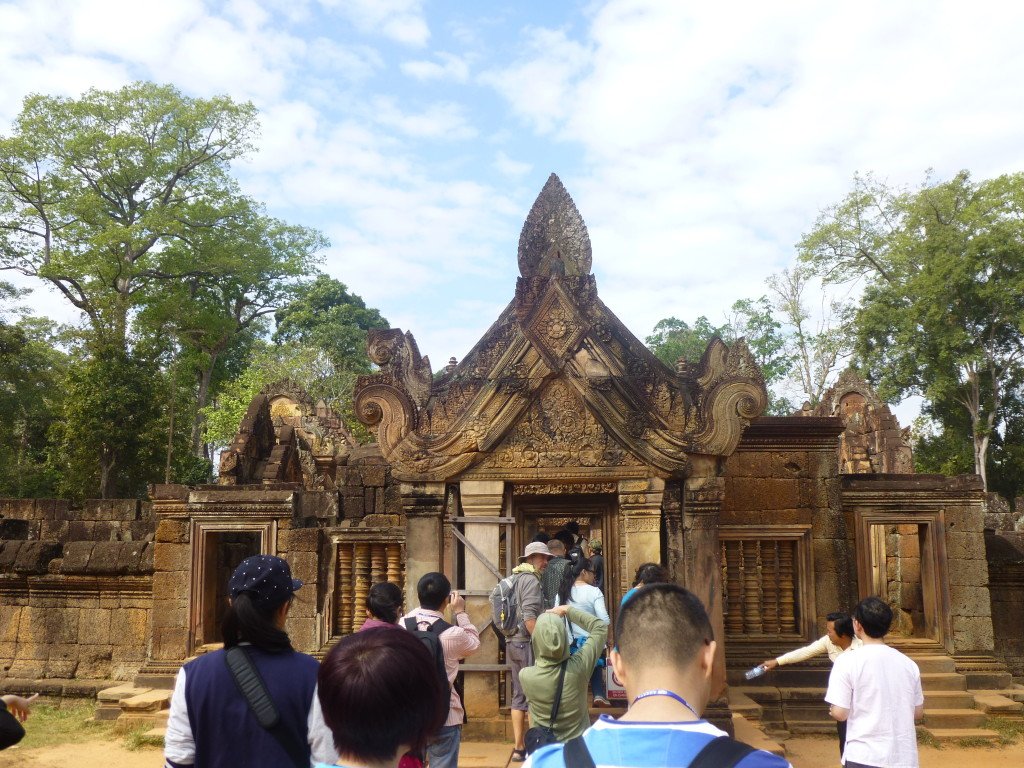 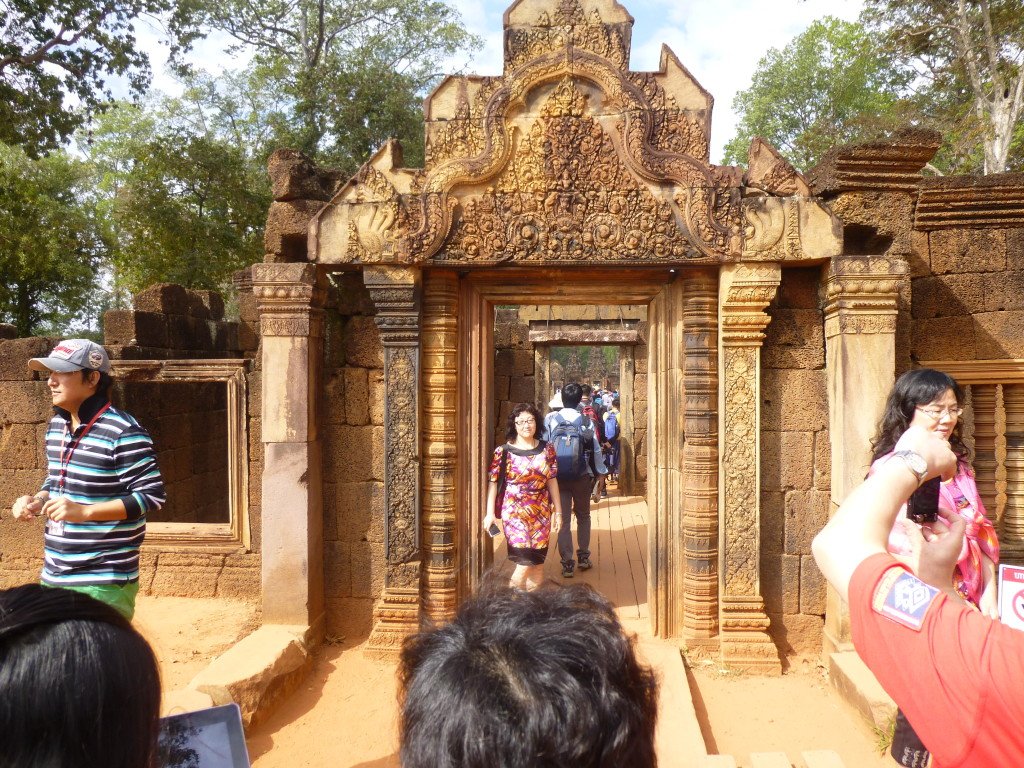 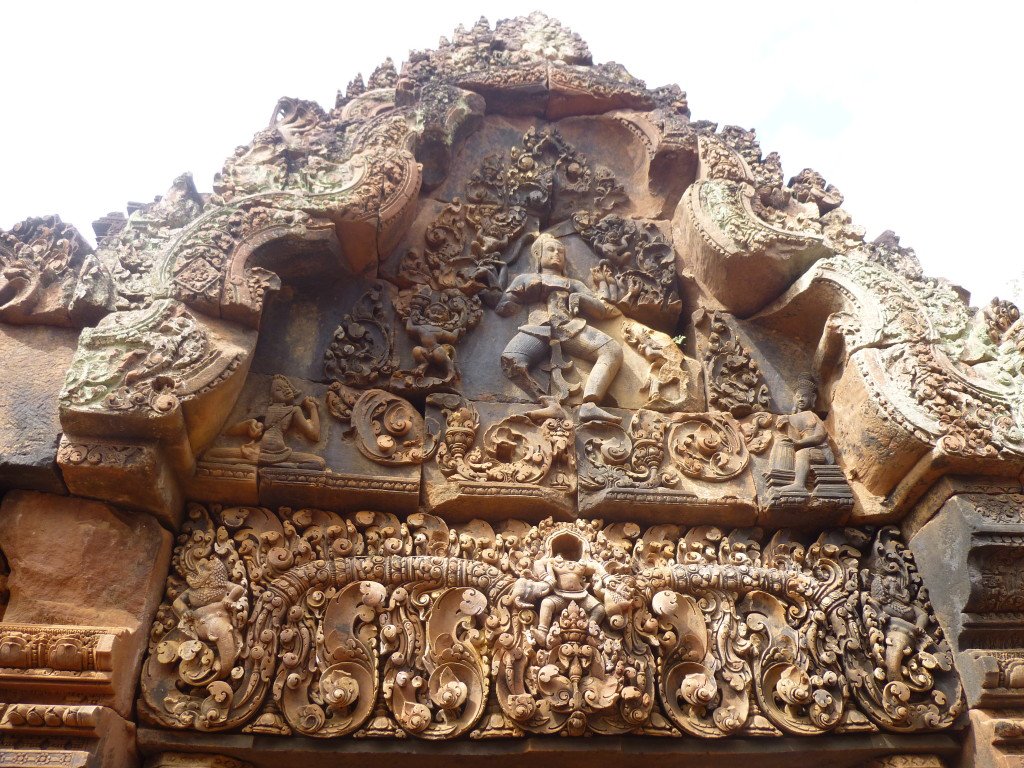 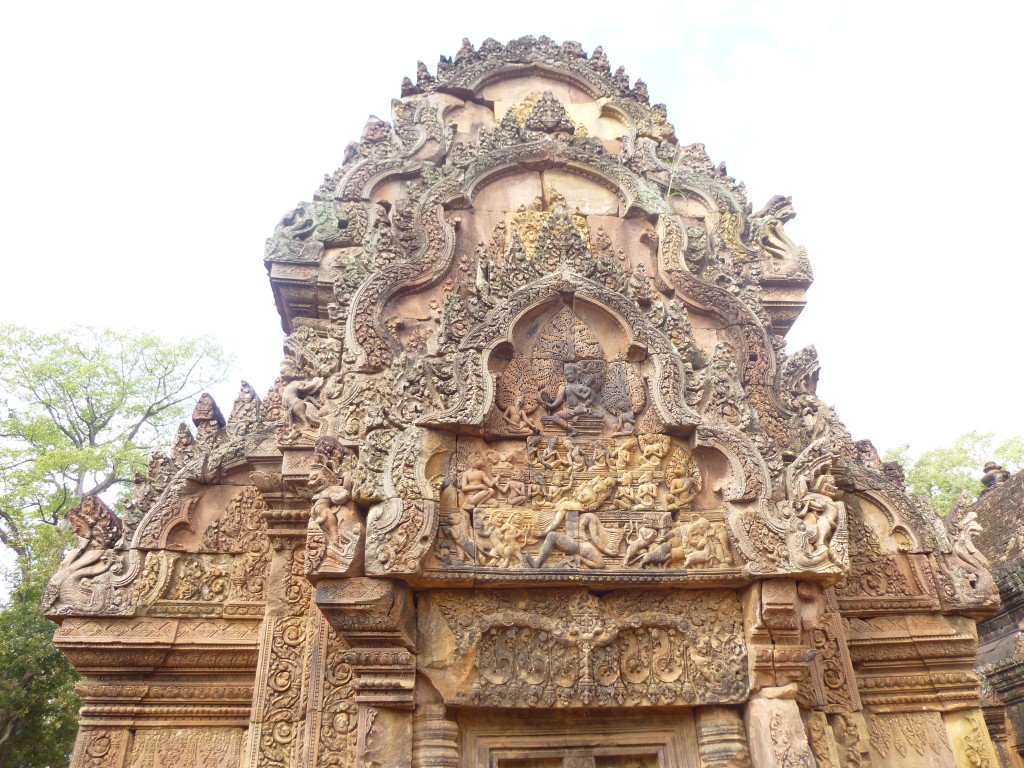 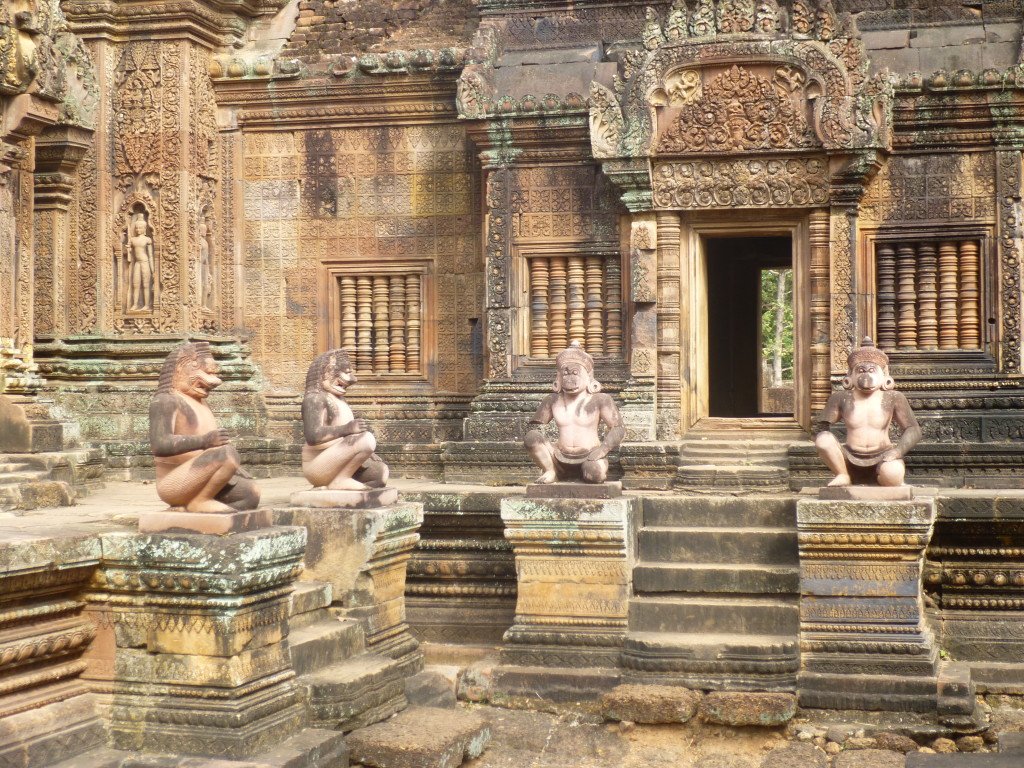 When you’re done with the sightseeing (go twice and spend 30-40 minutes each time) you can walk along the waterways or even take a boat ride. I costs $10, and I could’ve probably cut the rate by 2/3 by bargaining, but the guy had a very cute little girl, and he didn’t seem to have too many visitors, so I gladly paid the rate. Very peaceful. 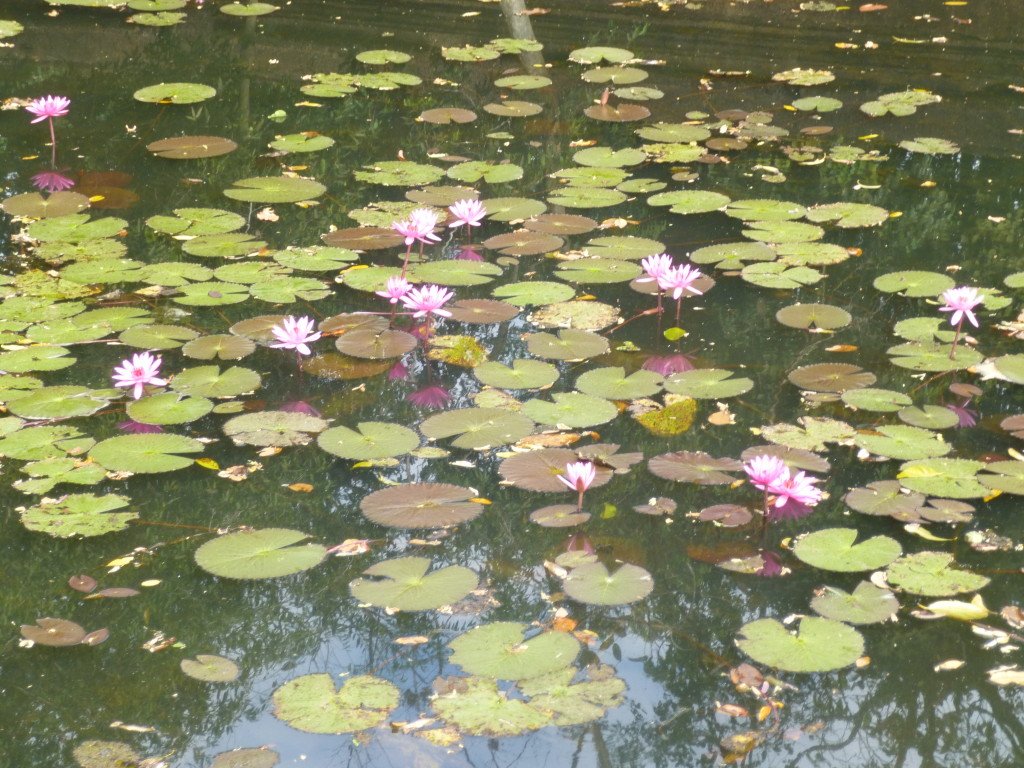 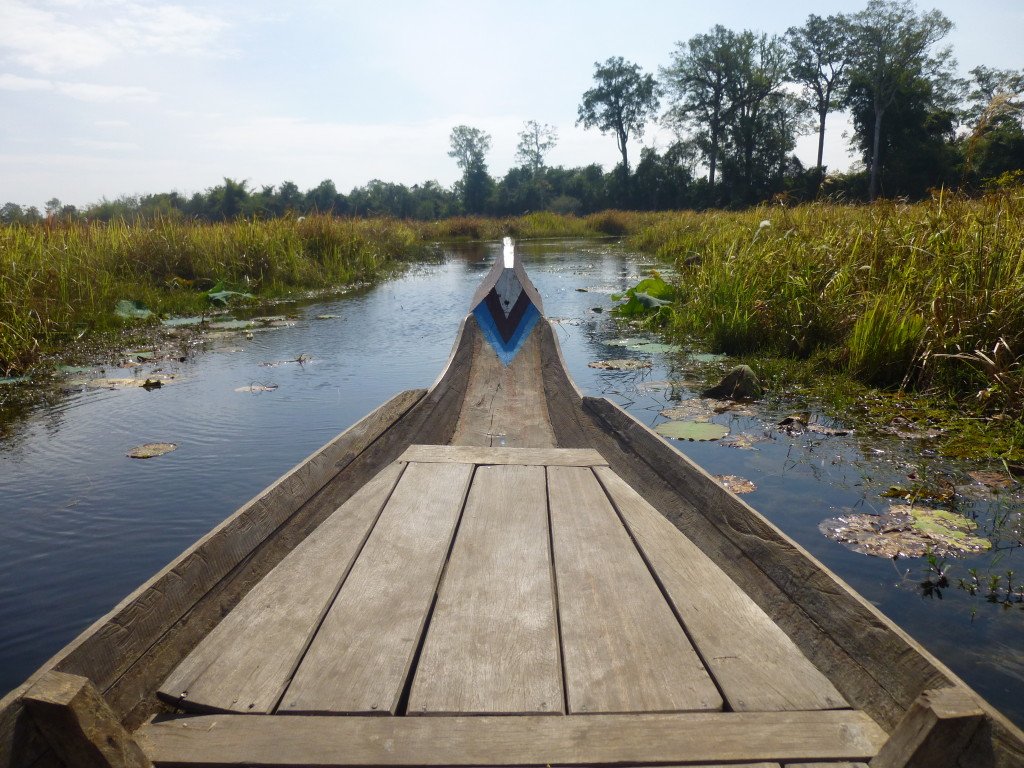 Visited the land-mine museum on the way back. It looks like a makeshift museum, but they also house and rehabilitate land-mine victims. The museum and the NGO were founded by an ex-child soldier, and they are doing a very good thing for their country still plagued by thousands of land mines. The entrance fee is $3, and they’re worthy of your support. 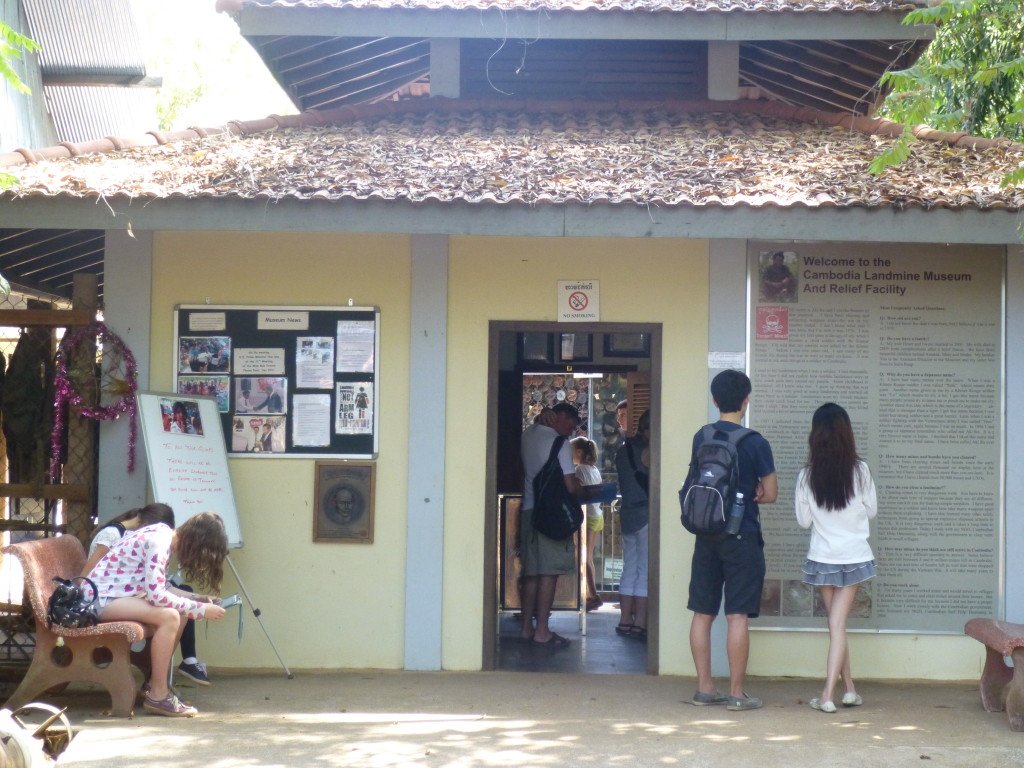 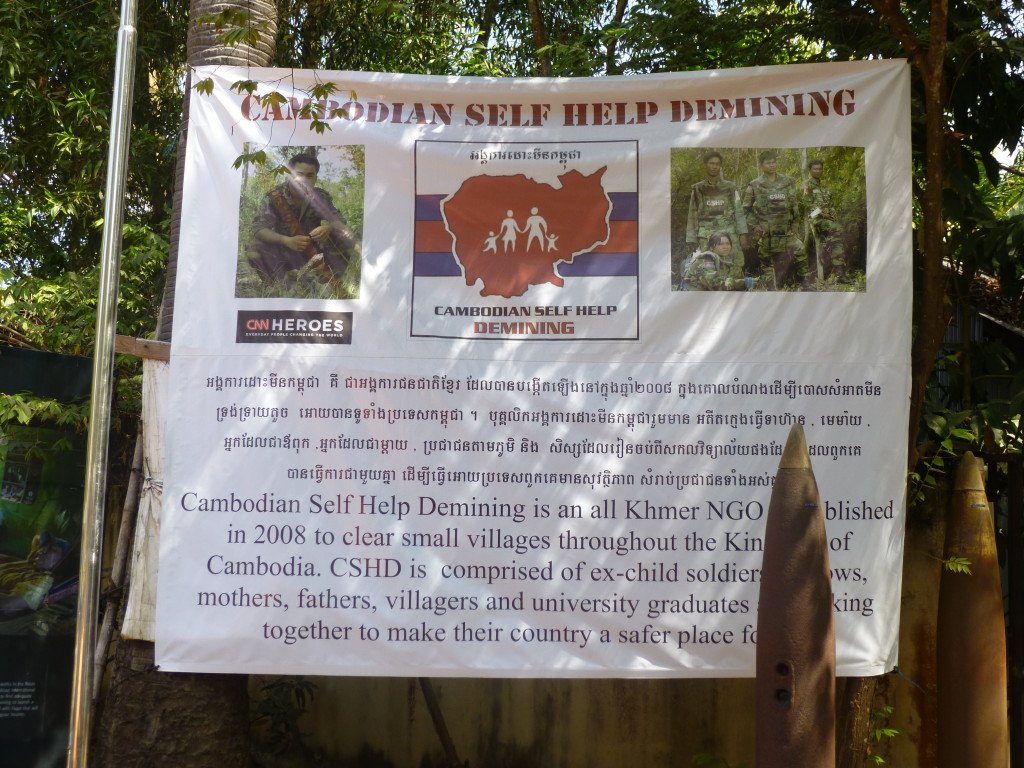 So, which temples did I like the most? That’s quite easy. Surprisingly for me, it wasn’t Angkor Wat. Surprisingly, because when people ask me where I’ve been I say Angkor Wat. Everyone knows Angkor Wat, but that’s it. Try to tell anyone you’ve been to Ta Prohm and you’ll hear: “Huh?”

Here is the winner and the runner-ups–IMHO, of course.

That’s right. I can’t give a preference to either Bayon or Banteay Srei. Each of them is amazing in its own right. I’ll tell you one thing, though. If Banteay Srei was a little bigger, I would give it the second place. It’s that beautiful!

My next and final Cambodia installment is about our favorite subject–money. Stay tuned.

Fantastic blog post. I love the Temples in Cambodia and could easily spend half of my life there.
The trees are indeed a problem, but I agree that they are part of the appeal. Whilst Angkor Wat is spectacular, I much prefer To Prohm or my personal favourite, Beng Mealea.

Thanks for your comment, and I agree with your preferences.