Why You Shouldn’t Trust Amex’s Transfer Time Frame to Iberia, and My First Ever Hi-Speed Rail Travel in Europe 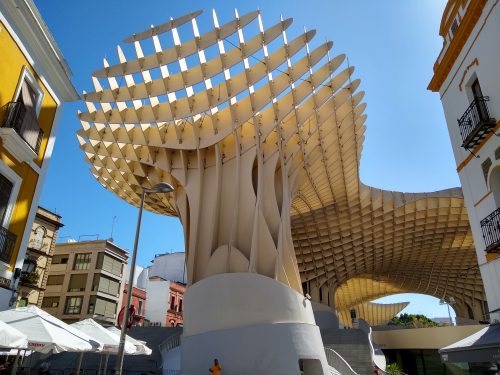 I came back home from Spain last week. This was my fourth trip to Spain and the first one to Andalusia. My cousin Timmy and I covered Seville, Malaga, Ronda, and Cadiz on a 12-day adventure. We traveled by trains and buses, stayed exclusively at Airbnbs, and enjoyed our trip immensely. There was one thing, though, that didn’t work out for us.

Due to some family issues, it’s hard for us to plan our journeys in advance, at least entirely. While I usually book flights and hotels in advance (flights because it’s often the only way and hotels because I can usually cancel without penalty), I delay everything else I can. That’s a calculated risk. If I’m not able to go at the last moment (which has happened twice to me in the last 9 months), I’m out $100 or whatever fee I have to pay to redeposit miles.

However, most vacation rentals  (and, as I’ve mentioned many times before, I love renting vacation homes) have rather strict cancellation policies. That makes it difficult to book them in advance. In addition, I like to be able to change my travel plans on a whim, which is why I also tend to avoid booking local transportation in advance as well.

And then there was that Iberia deal

That lack of planning can backfire sometimes. We found ourselves in Cadiz on the final stretch of our trip (by the way, what a fun city, almost unknown to U.S. tourists, and that’s a shame!). Our flight home was from Madrid, so we had to find our way to the capital somehow. I had initially planned on riding on a train until, a few days before our departure, I found a great deal on Iberia.

First thing I tried to do was transfer my British Avios to Iberia (BA didn’t have availability for this flight), but I kept receiving an error message. I started getting mad, until it hit me: my BAEC Household account is barred from transferring Avios out.

No problem, I thought. I have hundreds of thousands of Amex Membership Rewards points. Even though the 40% Amex transfer bonus had ended, this deal was still too good to pass up.

Iberia can take a VERY long time to process your transfer – to your detriment!

The transfer should’ve taken no more than 48 hours, and I was hoping it would take less than that. And thus the waiting game began.

I waited and waited. And waited. The award space was still there. The Avios were not.

When the 48 hours were up, I called Iberia in a desperate attempt to find out what was going on and put the award on hold. Even though their T&C allows it, 3 different agents insisted that putting awards on hold wasn’t possible. I probably spent a good 2 hours on calls without getting anywhere.

My next call was Amex. They told me that the transfer could take up to one week. When I countered that it was supposed to be completed within 48 hours, the agent told me that yes, this is what it usually takes, but Iberia has a 1-week policy, and there was nothing Amex could do about it.

3 days later, my Avios (useless now for my goal) still hadn’t reached my account, and soon the award space was gone anyway. So we were back to plan A. I booked 2 train tickets to Madrid as I had been planning to at the beginning.

The Avios had been waiting for me in my account by the time I arrived back in New York. I don’t know when exactly the transfer  was processed, but it took between 5 and 6 days. Thank you Iberia. Thank you very much! 😕

The only thing I wish is that I’d never found that Iberia “bargain” in the first place. Would’ve saved me hours of aggravation.

The RENFE trains are very good, but its website is clunky and confusing. I booked our seats with a European aggregator, Omio, which I’d used before for booking my previous rail and bus travel in Spain. They added a 7 Euro service charge per ticket, but their website is very user-friendly and simple to navigate.

When I was almost done with the reservation, I received an offer to upgrade to First Class for 4 Euro per ticket. I had no idea what the upgrade would buy me, but, well, whatever, I can’t say no to cheap upgrades. The tickets ended up costing us about 155 Euros for two. 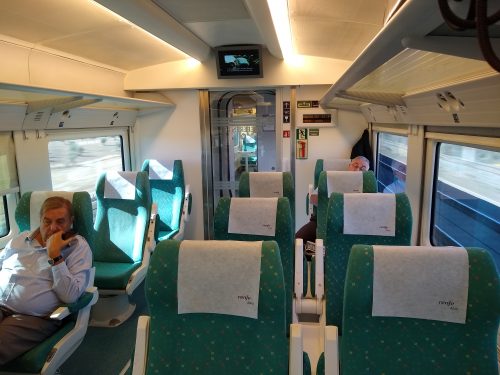 Renfe First Class car — not mindblowing but roomy and functional

Well, Emirates it ain’t, but the RENFE First Class upgrade gave us access to comfortable and roomy seats (one plus two configuration) with large tables and a better recline. I had something to compare it to because we had traveled on a RENFE train between Seville and Malaga in Second Class (the cheapest) a few days prior. Those seats had been perfectly fine, but a bit tighter. 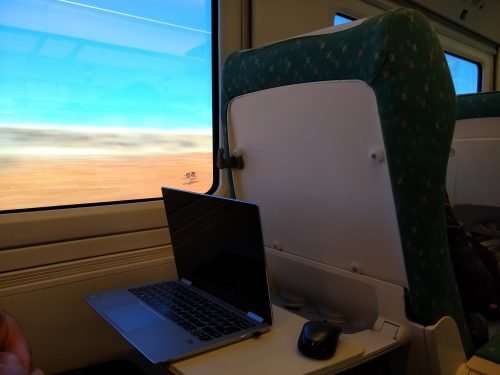 Large tables are perfect for work, but the lack of WiFi isn’t

Unfortunately, despite RENFE’s boosting WiFi connectivity and lounge access on their website, WiFi wasn’t available on my ride, and the Cadiz station doesn’t have a lounge either. However, it did have charging outlets at every seat. And there was a buffet car – always a welcome reprieve from the rail travel monotony. 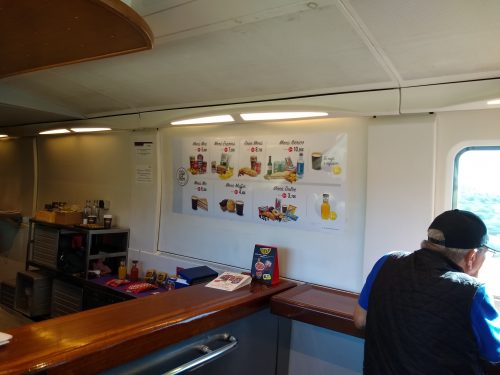 Our trip between Cadiz and Madrid took about 4.5 hours. The train reached speeds up to 250 km/hour at some points, but mostly stayed in the sub-200 km/hour territory.

TIP: If you’re traveling to Madrid airport, your RENFE ticket should already include the airport transfer from the Atocha train station in Madrid. It’s not exactly advertised, but all you need to do is scan your ticket at one of the machines before entering the airport platform, and it will give you a separate ticket for the airport train. We actually didn’t take the train right away and went to the station first for some shopping because we had a lot of time to kill and didn’t want to arrive at the airport too early. 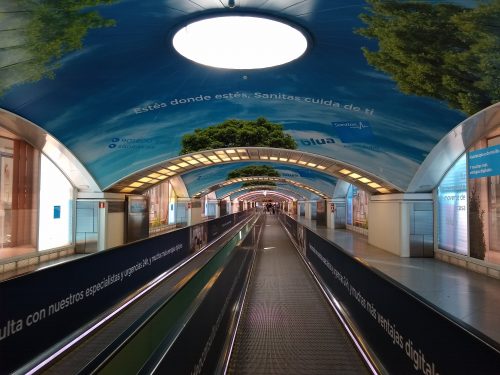 The people mover at the Atocha train station in Madrid

All in all, the train ride was a pleasant experience, and I would recommend the First Class upgrade if it comes very cheaply, at least on RENFE trains. And I would totally use rail travel for journeys between cities (not always between airports, but that depends). If you calculate travel times and costs for getting to and from the airports, rail travel in Europe is something you can’t beat with a stick.

Filed Under: Bargains, Cheap Travel, Miles and Points
← This New/Old Credit Card Bonus Can Fly You in Business All Over the World
Our Airbnb Problems in Spain: We “Got Got” (Well, a Little) and What Else You Need to Ask to Avoid Unpleasant Surprises →
5 1 vote
Article Rating
Subscribe
Login

Oh, you went to the “mushroom” of Seville too? Been there recently. How about Malaga, Ronda, and Cadiz? Any recommendation?

Yeah, Seville is something. Just don’t go in the summer; it was still hot at the end of September. I’ll write the report (hopefully), but here goes: 1. Ronda is out of this world. It’s a small town, but one day is not enough, I’m planning on getting back. 2. Cadiz is a hidden gem. Definitely visit, at least for 3-4 days. There are a couple of beautiful white towns nearby, can be done in a few hours. 3. Malaga is beautiful, but I wouldn’t spend more than a couple of days (we stayed 4, but spent one day in… Read more »

Thanks for the suggestion. Ronda looks great and cadiz seems excellent for seafood. ^_^

As always, it’s a pleasure to read your informative — and often highly amusing — articles.