So, Chile is out and Brazil is in. Barely! In today’s game, Chileans came this close, no really, THIS CLOSE  to the win on 120th minute (that’s right!), when Pinilla fired a cannonball shot that smashed off the crossbar and made the heart of every Brazilian skip a beat. As a result of a 1:1 draw, Brazil eventually won in a roulette game called penalties. Chileans put lots of heart into the battle and they should be proud. Wow, what a game! This is a beautiful equalizer executed by Alexis Sanchez:

Whoa, whoa, what was that? Oh, no, that was Chilean TV personality Jhendelyn Núñez celebrating the Sanchez’s goal by showing her true colors (is she on basic cable, btw?). And, oh, here is the Sanchez’s shot. Not as spectacular as the shot above, but still quite good!

Nothing Should Stand in the Way of a Good Bite

Forget the Butthead-slash-Headbutt Pepe, ladies and gentlemen, there is a new star in town! Colombia beats Uruguay 2:0 today, and I am not surprised in the slightest. Uruguay, you see, has nothing on anyone without the upper-jaw champion of the world Luis Suarez. Oh Luis! You are my hero! You are Mike Tyson of soccer! You are a hope and inspiration for all little boys out there who believe that a good pair of legs is not everything that matters in the field. And think of all those skeptics who have dismissed the importance of good dental work in the game of soccer! What are they saying now? Huh?

Speaking of which, Luis, can I have a number of your dentist?

I don’t know why everyone has been so hard on this fine young man. So he likes to show some teeth, so what? I mean, why even have healthy teeth if you can’t press them into good service for the right reason? What is he supposed to do? Smile like an idiot?

In case you live deep in the woods (or in the parts of America where soccer is still a “girly sport”), this incident took place during the game vs. Italy when Suarez bit an Italian player Georgio Chiellini–who, by the way, was not possessing the ball at the moment. After the game, asked why he did that, Suarez simply said: “Because I could.”

Um, no he didn’t. Unlike everything else, I’ve made that up. What he did say was this:

‘In the run-up to the impact, my knees came together, I lost my balance and that destabilised my body and I fell into my opponent. In that moment, my face came into collision with the player, causing a small bruise on my cheekbone and a lot of pain to my teeth, which caused the referee to stop play. That is what happened and in no event did I, as is written in the document, “bite” or “try to bite”.’

And this, my friends, I’m not making up! I wish I could, but I suck at fiction. 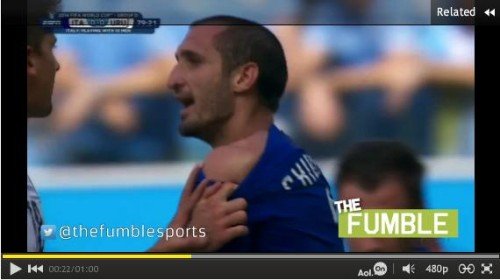 Of course, evil FIFA would have none of this, and disqualified Suarez for nine matches and four months. My goodness, that will show him! He had been disqualified for biting twice before; for seven games in 2010, and for ten games in 2013.

See? The dude had totally learned his lesson!

It appears that Liverpool, the club Suarez is playing for, has learned its lesson too, though, as they are hard at work (reportedly), trying to unload him to Barcelona.

What the Hell is Suarezing?

Suarezing is a new fad in  Brazil. There is a poster with a Suarez Adidas ad in Rio, that tourists and the locals alike are putting to a good use. Gee, I left Brazil too soon. 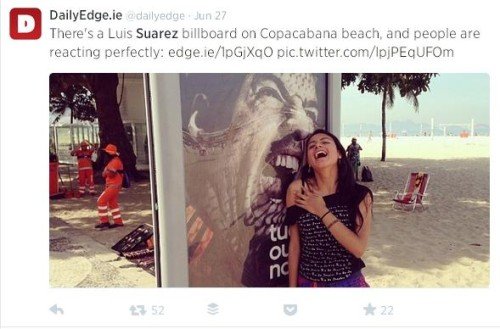 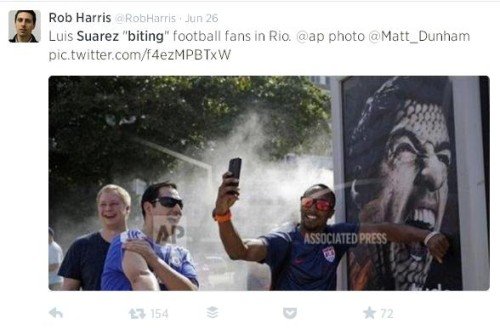 I’ll leave you with a joke that has nothing to do with Suarez, but is funny as hell, methinks.

Have a glorious Sunday, folks!