My São Paulo Vacation Rental and What to See 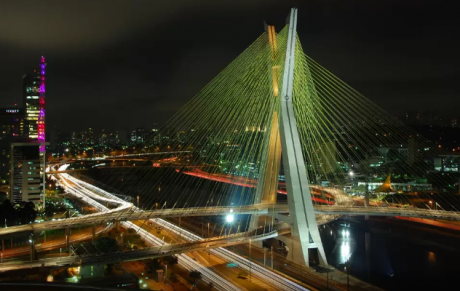 The São Paulo Vacation Rental review is the first part of a long overdue report on my accommodations during in Brazil.  As I’ve mentioned already, we didn’t stay at a single hotel during this trip. We booked  vacation rentals in all 4 cities: São Paulo, Iguassu Falls, Salvador, and Rio. This was my first trip ever when I so heavily relied on several vacation rentals in different places during a short period of time. All bookings were a success, although it doesn’t mean there weren’t any issues. 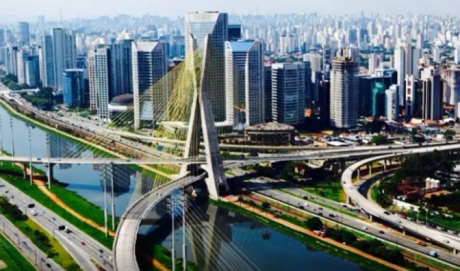 We rented a 2-bedroom apartment in an upscale neighborhood called Brooklin Novo (yes, with an “I”). It’s quite a ride from downtown (think Grand Hyatt, which is about a 10-minute walk from the apartment), but São Paulo is huge, and the attractions are quite apart from each other anyway, so I honestly don’t know if it matters where you stay. That’s unless your primary goal is clubbing – then, you should probably stay in, I don’t know, the bohemian district of Vila Madalena or in close proximity to glitzy Avenida Paulista… or anywhere else for that matter, because the São Paulo nightlife is everywhere and it’s non-stop from what I’ve been told.

São Paulo Vacation Rental: The Apartment and the Building 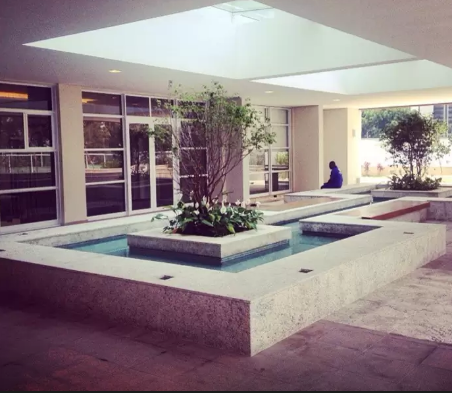 Our apartment was small, but laid out beautifully with 2 bedrooms, 2 baths, a nice living room, a well-stocked kitchen, and a dining room that you could – if it wasn’t for the heat – turn into a giant patio by opening the floor-to-ceiling windows. Amazingly well designed! 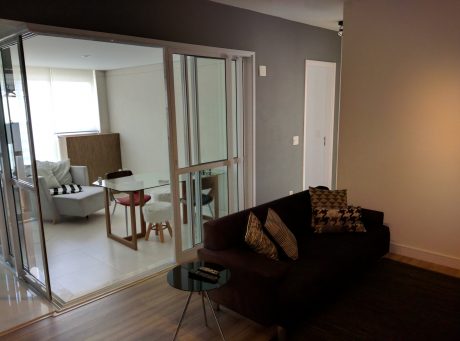 The window open up to turn the dining room into a terrace. 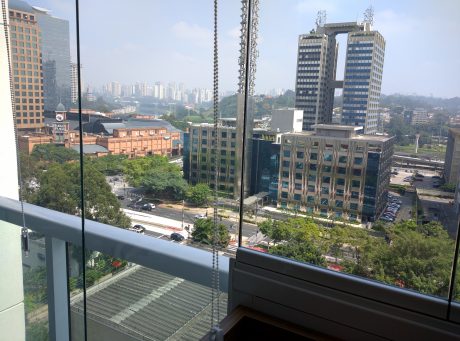 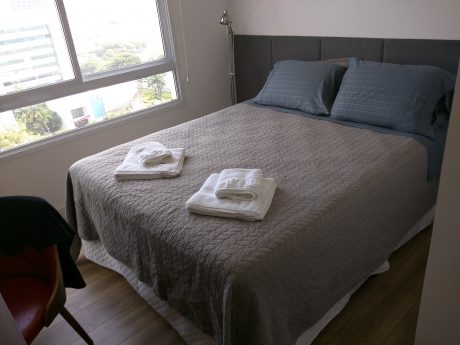 Despite a relatively small size, there are two full baths 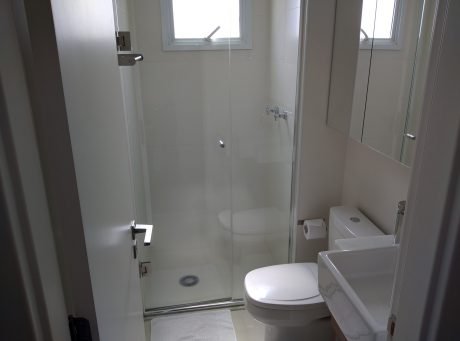 The building amenities include a large indoor lap pool, a beautiful outdoor pool, a recreation room, a gym, and, supposedly, a spa, although we never tried it. There were never anyone besides at either pool.

Pools and the gym are open 24 hours a day 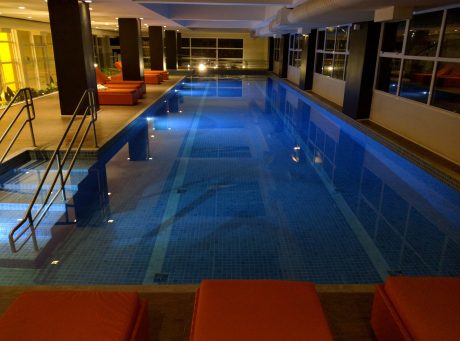 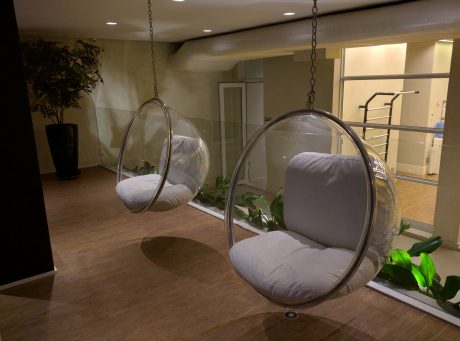 The thingy that changes color is a cellular antenna (or so I was told). Looks a bit ugly during the day, though. 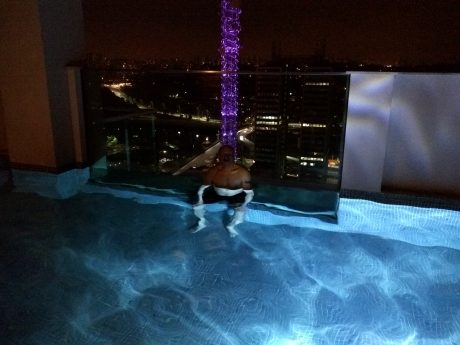 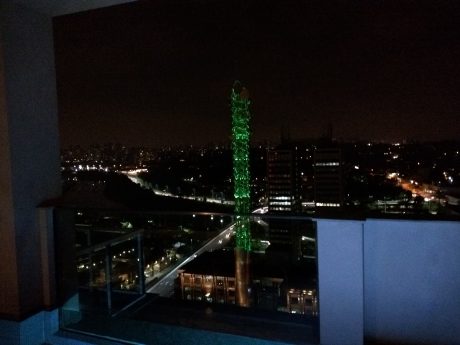 A large air-conditioned recreation room adjacent to the outdoor pool with a fridge and drinking water. Perfect for a self-catering cocktail hour 🙂 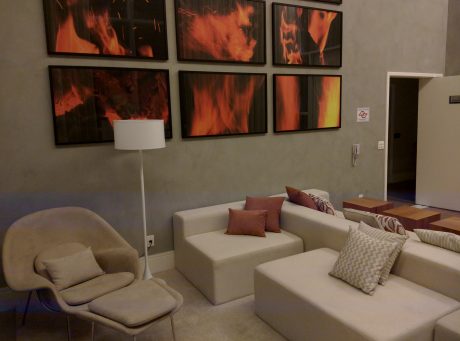 The best part of it all: everything, including the pools are open 24/7 if you’re up for a midnight swim – which we were as our days were busy.

Within a 5-7-minute walk there are two giant malls with dozens of eateries, so getting hungry was not an option. The security desk is running a tight ship, verifying our information every time we would come home late at night. São Paulo is not the safest city on the planet, so their vigilance was well appreciated.

There was 1 thing that was less than ideal. The second bedroom didn’t have a real AC. Rather it had a so-called “climatizer” which didn’t cool anything. The first night was reasonably OK, but the second night was much hotter… Don’t listen to the locals when they say “it’s not too hot, anyway.” They are not lying; it’s just they have a different idea of “hot”. If not for that, the apartment would’ve been absolutely perfect. 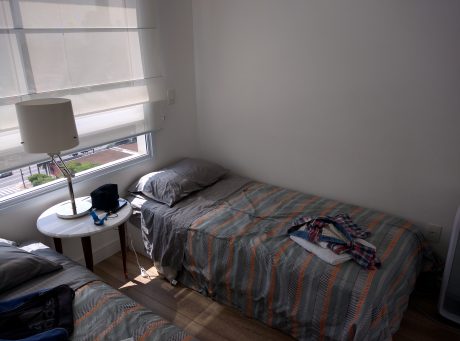 Conclusion: the apartment is excellent for a single traveler or a couple, but it’s not perfect if you need someone to sleep in the second bedroom. On the other hand, it’s almost perfect if this “someone” isn’t you. 🙂

What to see in São Paulo

We only stayed for two full days (the third one I spent on the phone with the airline undoing my own screw up), so we didn’t even begin scratching the surface. However, I liked everything we did managed to take in, and could recommend wholeheartedly.

Ibirapuera Park: Huge, beautiful, peaceful, we got there on the first day in the afternoon to check it out, but decided to stay longer and just relax. A truly enjoyable place.

Entrance to the park 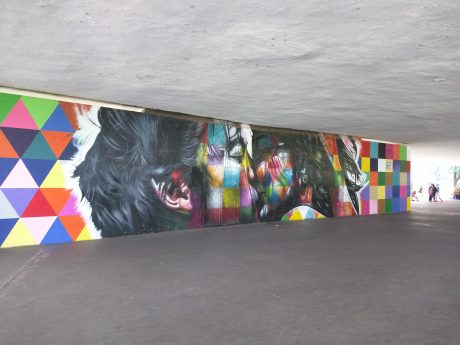 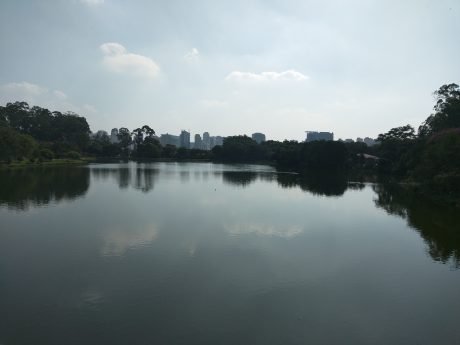 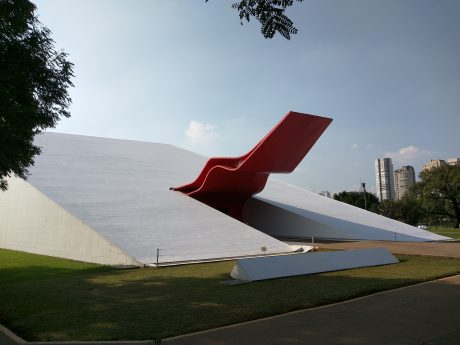 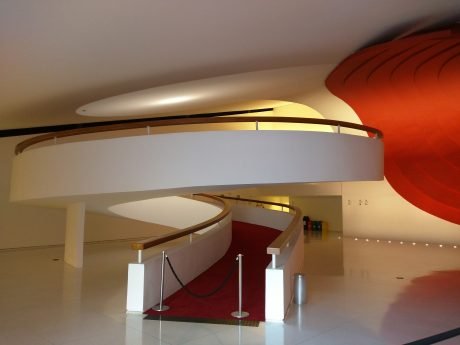 Hop-On Hop-Off Bus in SP is called “Circular Turismo Sightseeing SP” – try to find it under Hop-On Hop-Off and you will fail. I personally love HOHO buses and tend to use them not only as a tourist bus, but also as a means of transportation, but I know it’s not everyone’s cup of tea.

Historic Center: The train Station, Sé (Cathedral), Benedictine Monastery, Theatro Municipal, Mercado Municipal and more. After making a full HOHO circle, we just grabbed their brochure and started walking after arrival at the first and last stop, Estação Luz – the Central Train Station. We walked our legs off and it was fun, if you’re not counting an occasionally strong gust of urine stench here and there. The number of homeless people downtown SP is staggering.

The day we went on the HOHO bus tour there was a vintage car show at Estação Luz. 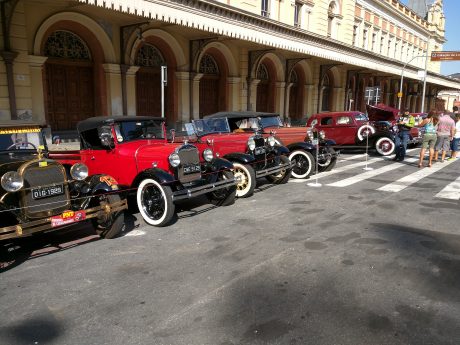 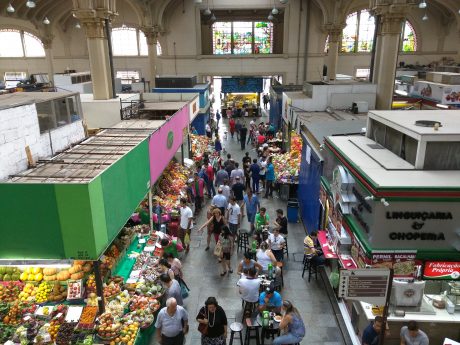 No, I agree, the above picture doesn’t do it justice. Maybe these do. 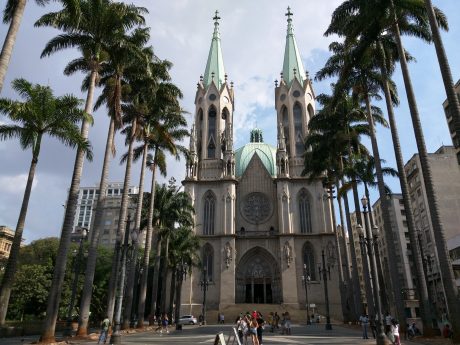 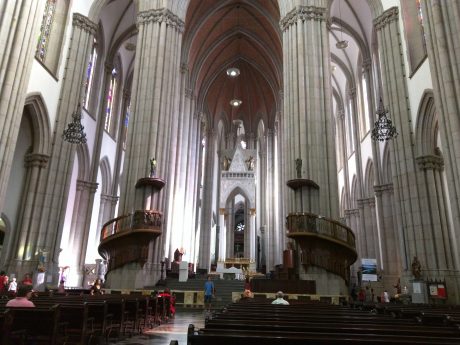 Morumbi and Market Place – 2 huge malls across from one another, and both within 5-7-minute walk from the apartment.

O Beco do Batman — a famous street in Vila Madalena featuring masterful and beautiful street art. Interestingly, we had a hard time finding the place, as no one from the Uber driver to the locals knew where exactly it was. Finally, a guy who saw us wondering back and forth senselessly, took pity of us and drove us around until we found the place. And then my phone died, so here are a few Wiki pics. Totally worthy of a Uber ride. 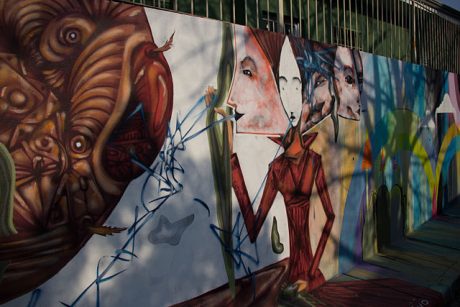 While I would be reluctant to recommend flying to São Paulo for a vacation (unless you love clubbing, in which case, oh yeah!), do stay in São Paulo for 3-4 days if you’re already flying via SP for another location in Brazil, especially if you can have a free stopover. There is plenty to see, and the food and nightlife are exceptional!

Filed Under: Cheap Travel, Trip Reports
← How to Game Singapore Suites Routes to Change a “No” into “Yes”
When Your Airline Sucks — Do You Need to Tell Them? →
0 0 votes
Article Rating
Subscribe
Login

Where did u find the place? And what are the approximate costs?

I meant to link to his listing, sorry. The link. We paid $240 for 2 nights including the fees.