Reduced 25,000 Miles Roundtrip from the US to London on Virgin Atlantic

I will admit, Virgin Atlantic is not my favorite airline. I know their planes are very cool with their color scheme and individual screens, and besides, Richard Branson is one of my favorite superheroes. But they tack on a hell of fuel surcharges just like British Airways, and you know how I feel about those fuel surcharges: it’s a scam! Yes, I know that most airlines in the world play this unsavory fuel surcharges game, but that doesn’t change the way how I feel about it. It’s a freaking scam, that’s how.

However, this offer is very lucrative in that you can book the flight to London for the next summer, and the availability (at least from New York) is amazing! June and July are wide-open, August, well, not so much. 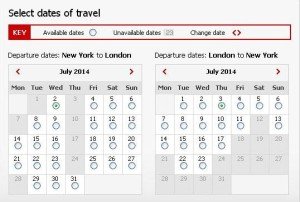 This roundtrip flight between NYC and London will only cost you 25,000 miles, down from regular 35,000 miles plus $449 in taxes and fuel. While I do share your outrage about those surcharges, getting this kind of fare in the middle of summer is a huge bargain, no matter how you look at it. If you don’t have Virgin Flying Club miles in your account, then an easy transfer from American Express Membership Rewards program or Chase Ultimate Rewards can do the trick. You must complete your booking before September 20th. Here is the list of the discounted US cities:

If the idea of doling out $449 for a supposedly free ticket is still too painful, then consider doing it a bit differently. If you can wrap up your travel by May 15th, you could fly into London on one of those cool Virgin planes for mere 12,500 miles and $131.50 (you’re still paying one-way fuel surcharges but you are avoiding outrageous Heathrow taxes). 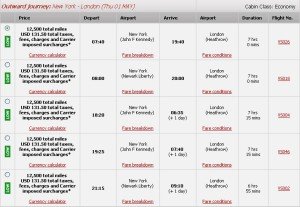 Then you could take a TGV train or a cheap Easyjet flight to Paris (around $60) for the second part of your vacation and fly home from Charles de Gaul. Make a double vacation out of it for less money. American Airlines has a 20,000 miles one-way special between the US and Europe until May 15th, and your taxes for the trip home will run you $86.60

Of course, you are not limited to Paris. Cheap, no-frills European airlines such as Easyjet or rather infamous Ryan Air will take you almost anywhere in Europe for only a few peanuts. Just make sure you find the OffPeak AA 20,000 mile redemption rate back home from wherever you’re going.

Filed Under: Miles and Points Trip Ideas
← Flying with kids? How about a nanny?
Credit Cards: What Are They Good for (Beyond the Obvious) →
0 0 votes
Article Rating
Subscribe
Login