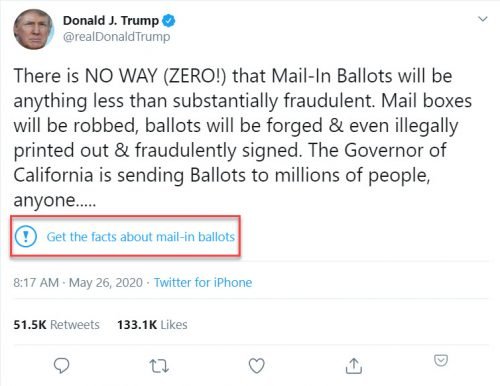 Facebook CEO Mark Zuckerberg has lashed out against Twitter’s decision to add fact-checking labels to its platform (bolding below is mine).

I just believe strongly that Facebook shouldn’t be the arbiter of truth of everything that people say online. Private companies probably shouldn’t be, especially these platform companies, shouldn’t be in the position of doing that.

Zuckerberg is one of the smartest men in the world, so please forgive me for not buying this. If Twitter simply removed every lie Trump venomously tweets out to whip up his followers into a frenzy, that could indeed be seen as an attempt at “arbitration of truth.”

Even then, Twitter would still be completely within their rights to do so: A private company, hello?

This does not make us an “arbiter of truth.” Our intention is to connect the dots of conflicting statements and show the information in dispute so people can judge for themselves. More transparency from us is critical so folks can clearly see the why behind our actions.

How did it start?

On May 26, Trump posted a tweet claiming (among other things) that:

There is NO WAY (ZERO!) that Mail-In Ballots will be anything less than substantially fraudulent. Mail boxes will be robbed, ballots will be forged & even illegally printed out & fraudulently signed.

Twitter added a little label to that tweet (and some others) that reads: “Get the facts about mail-in ballots.” When you click on the label it takes you to the page with other media sources where you can read more on the subject matter.

How’s it arbitration of truth? Trump’s outrageous lies have not been removed, they’re still published for everyone to see. The only thing that’s added is a label inviting readers to check for themselves if the post is accurate. And while Twitter does state that “Trump makes unsubstantiated claim …” it also provides an option to get the second opinion. And the third, and the fourth, etc.

Arbiter of truth? Because of a fact-checking label? Hardly!

Predictably, Trump didn’t take kindly to the changes instituted by his favorite medium.

So why would Mr. Zuckerberg go ahead and say something so absurd?

Well, how about this theory? Maybe because Facebook bears more responsibility for putting Trump in the White House than anyone in the world, except, perhaps, Vladimir Putin and Trump himself.

So if you’re Mark Zuckerberg, how far would you go to fact-check someone who is:

That’s what I thought!

Of course, if these were not compelling enough reasons not to engage in any kind of a confrontation with Donald Trump, there is another one. Changing any business model costs money. Changing a business model of a behemoth like Facebook would run them a bill with a lot of zeros following other numbers. And for what? Civility? Integrity? In this day and age?

Not sure I understand but thank you for your comment.

You’re not quite right on one important point. “Even then, Twitter would still be completely within their rights to do so: A private company, hello?” They’re a private company but they, along with other tech companies, are explicitly not held to the same editorial standards such as those for the NY Times, CNN, etc…. The reason they’re not held liable for the content posted on their sites is because they were considered to be equilivant to a ‘town square’ ie a public space. Therefore either they should not be doing any kind of commenting/censorship OR they should police the content… Read more »

Mitch, thank you for your comment! Look, I’m not a lawyer and I don’t know if you are, but Twitter has been known to both remove false-news tweets and delete accounts of repeat offenders like Milo Yiannopoilos and Ricky Vaughn. Is this case going to the Supreme Court? Knowing our POTUS I wouldn’t be surprised, but I doubt that Twitter has unqualified legal team who don’t know what they’re doing.

“they should not be doing any kind of commenting/censorship”… Really? None at all? What about Nazi hate propaganda?…all good?

Just because they created a public space doesn’t mean they don’t get to decide who enters it and who doesn’t.

I hope technology continues to progress so that someday AI can listen to private phone calls and disconnect us if we say something wrong.

Nick, I get the sarcasm, but if POTUS didn’t run the country on Twitter, maybe the “truth” labels wouldn’t be necessary. Unfortunately, he’s not exactly a private citizen, and his “phone calls” ain’t private either.

Nah…Then who will our Dear Leader ever get to talk to?

You are a brave soul Andy!

Thanks for you comment Tricia! Why, you think Mark will send them, black choppers after me? 🙂 Or you mean, getting way out of my lazy travel hacking comfort zone? You’re right, it’s scary! 🙂