My apologies for the radio silence. I’ve traveled to Hong Kong, Bangkok and Manila, flew on Cathay, Thai and Etihad, and stayed at Intercontinental, Hilton and Airbnb. The reports are coming, and I’m also coming with a major announcement. Just need to take care of some work first.

On September 5, I wrote this:  Delta SmyMiles Devaluation 2016: Book an Award Flight to India Before It’s Too Late.

Congrats to those who got on this, because it’s too late now. Delta has killed its last semi-sweet spot on its chart EFFECTIVE IMMEDIATELY. In the past, they would devalue without a notice, but on a certain date in the future. This time — the hell with the niceties! The increase to Indian subcontinent is immediate and the biggest yet — from 70,000 to 97,500 miles, a 40% jump! 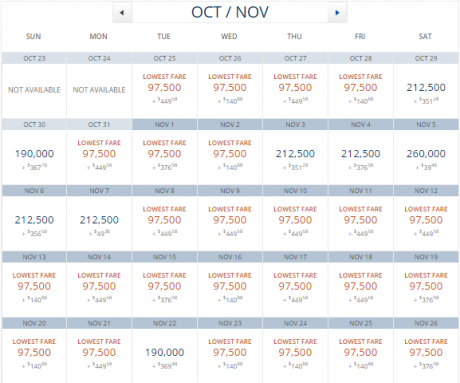 All in all, this is the 8th Delta SkyMiles devaluation.

Delta SkyMiles has never been “user friendly,” but this MO makes me sad that airlines are given a free hand to screw their members whenever they feel like it. 8 devaluations in under a year — is quite ridiculous, and I’m strongly convinced that coach devaluation is coming. This greedy, greedy airline that’s already destroyed its long-haul business class levels, is not going to stop.

HT to VFTW and Point Me to the Plane

[…] that on October 25, 2016 Delta drastically devalued North America to India awards. Business class awards went up 40%. Per Delta’s disdain of customers, there was no notice, […]

[…] is for flying Alitalia itself.  Delta furthered its own string of unannounced devaluations by drastically increasing the award price of business class flights to and from India.  And, it appears that Virgin Atlantic is on the cusp of increasing the price for a Celebration […]