My Mini Guide to Lençóis Maranhenses, the Most Unique Wonder of the World You’ve Never Heard About: Part 1 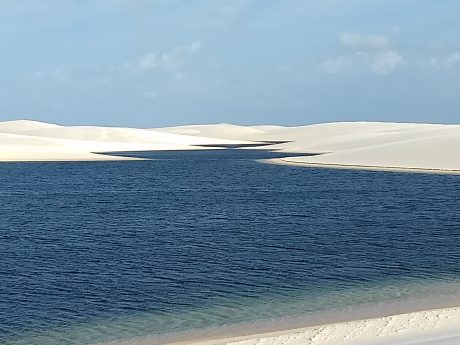 I’ve been fortunate enough to visit yet another Wonder of the World. Because if the Lençóis Maranhenses National Park in Northeastern Brazil is not a true wonder of the world, I don’t know what is.

While you won’t find Lençóis Maranhenses on any major travel bucket list, it should be on yours. Whatever it is you’re planning for next summer, scratch it. Make this trip to Northeastern Brazil a priority; you won’t regret it!

What Is Lençóis Maranhenses?

It’s something that looks like a desert and feels like a desert, but isn’t a desert. Lençóis Maranhenses receives 47 inches of rain every year – deserts get about 10. The park defies description.

Here is a little preview. You arrive at the park on a small open-air bus based on a 4×4 vehicle. Only 100 or so of them are certified by the park, and I know it sounds like a lot, but it’s not — the park is immense!

Since I stayed in the adjacent village of Santo Amaro, the ride into the park took less than 10 minutes. All of a sudden, you find yourself in the middle of this. 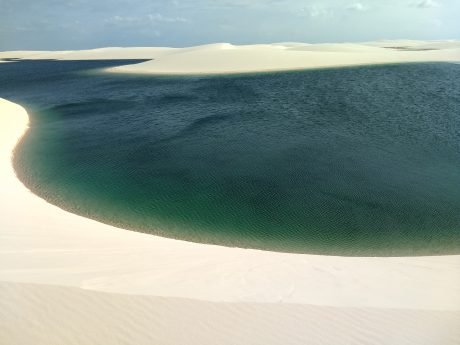 Otherworldly? Ethereal? All that and so much more!

When you witness this scenery for the first time, it doesn’t matter how much you’ve read and how many photos you’ve seen. You’re breathless. This can’t ever exist, you’re thinking to yourself!

And yet it does. It’s not a mirage. There are no reasons for your mind to play tricks with you sanity. What you see is what you get!

Nothing can prepare you for that first experience, because nothing like Lençóis Maranhenses exists anywhere else on this planet! 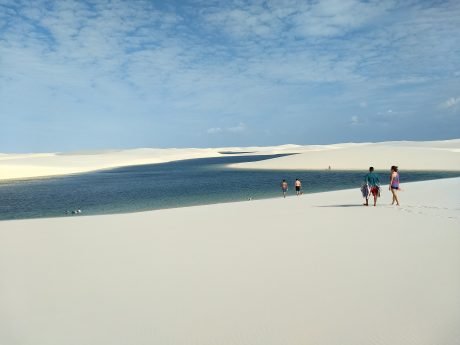 Lençóis Maranhenses receives a huge amount of rain between January and June. The rock foundation beneath the dunes is impermeable, which is why the water stays put until the lagoas dry up from October to December. And then the cycle starts anew.

That’s all the science I’m going to cover in this article. Go here or here if you want to know more.

Where is Lençóis Maranhenses?

Whoever says that it’s remote (and a lot of people on Internet forums say that), I have no idea what they’re talking about. Remoteness is not an issue here. Lençóis Maranhenses is no more remote than Machu Picchu or Halong Bay. It may be slightly more remote than Iguassu Falls, but surely less so than Easter Island. The reason why Lençóis Maranhenses is still not an international household name must be due to a bad case of whocaresness on the part of the local travel authorities. I was unable to break through to SECTUR (the state of Maranhão tourism body) no matter what I tried – email, Facebook or Twitter; English or Portuguese…

In any case, the current state of affairs with the international tourism is their loss and our gain. Get your butts there soon, before it gets crowded and pricey. 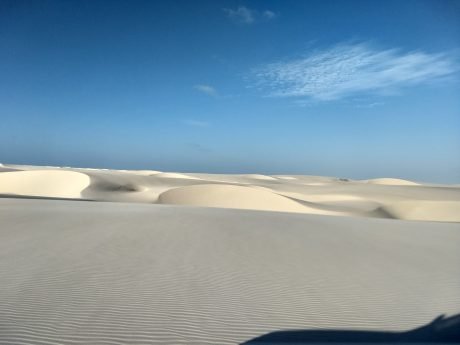 When you see the dunes up close and personal, you understand why they’re named lençóis (bedsheets)

You will most likely start your ride to the park in São Luís, the capital of the State of Maranhão. From there, you will need to book a ride to one of the 3 points of entry: Barreirinhas, Santo Amaro, or Atins. Whatever path you choose, the transfer time will take between 4 and 5.5 hours.

It’s easy. Here are all the airports with a connection to São Luís.

For a true Business Class seat, you need to fly via Rio on American, or São Paulo on American or LATAM. If you don’t care about staying in Rio, American flies better planes to São Paulo (777-300 with Reverse Herringbone) than Rio (777-200 with Zodiac seats). LATAM flies A350 from São Paulo. I took that LATAM flight last year and didn’t like the seat. Of course, we’re still talking lie-flat, so I managed to “tough it up” for 10 hours, somehow. 🙂 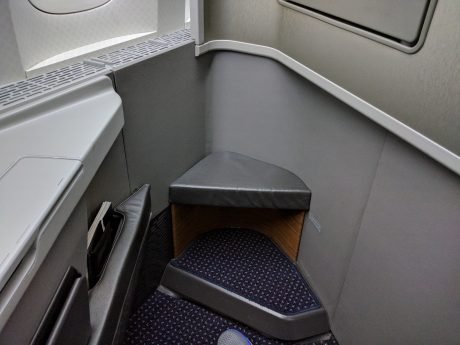 The tiny space for your feet, rather than the reputed “vibration” I’ve never experienced, is my major beef with those Zodiac seats

If a Business Class seat is not a necessity, you have more options. LATAM flies from Miami to Fortaleza and Belem, and American flies to Brazilia (also from Miami). You can also use a combination of an American flight to Manaus with a GOL flight (use Delta miles) between Manaus and São Luis.

Here are my flights:

American is my go-to airline to Brazil. Of course, both Delta and United fly there as well, but the awards are pricey and much harder to find, especially in business, while American has amazing availability to Brazil. I could’ve found flights from NYC to São Paulo, too, but I wanted to stay a few days in Rio. Here is the award space between JFK and GIG for the next summer. 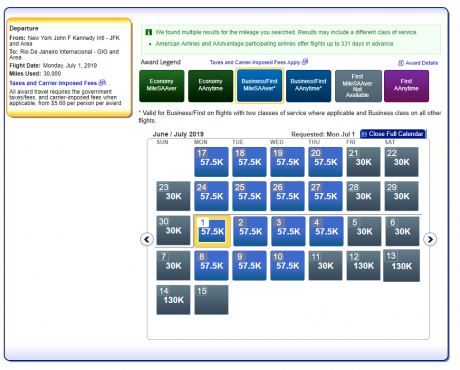 From São Luís to Lençóis Maranhenses

As I’ve mentioned, there are 3 points of entry: Barreirinhas, Santo Amaro, and Atins.

Barreirinhas has the best developed tourist infrastructure – there are one large resort-type hotel, lots of posadas, and quite a few Airbnb options. Another advantage is a scenic flight over Lençóis Maranhenses you can book in Barreirinhas, which is relatively cheap as far as scenic flights are concerned. The negative is a long and uncomfortable ride to the park, about 45-60 minutes.

Santo Amaro is right next to the park entry. It’s a big village or a small township depending on the way you look at it. Santo Amaro has become more accessible now that the last stretch of highway has been paved and you can ride door-to-door in the same vehicle from São Luís. A major advantage is that you can get in the park in 10 minutes. Disadvantages are fewer lodging options and eateries; as to the village itself… if you’ve been to Machu Picchu and didn’t particularly enjoy Aguas Calientes (the village at its foot), then Santo Amaro is not even half-way there. 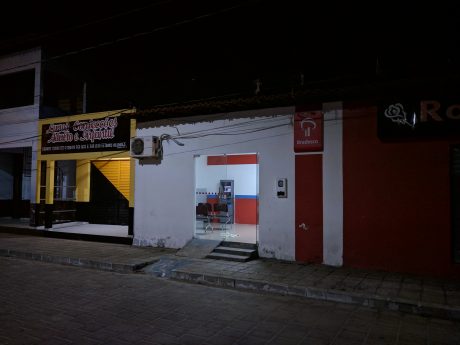 It’s unlikely you will find Santo Amaro lovely; on a bright side, it now has an ATM  🙂

Atin is still a small and sleepy village with sandy streets and even fewer lodging options than Santo Amaro, which has nevertheless been gaining popularity in the recent years. It’s most difficult to access, and the tours are supposedly more expensive, although they are so cheap in general that “more expensive” doesn’t mean much.

Next: My Mini Guide to Lençóis Maranhenses, the Most Unique Wonder of the World You’ve Never Heard About – Part 2: Costs and Logistics

Filed Under: Miles and Points, Trip Reports
← Credit Card Bonuses: Latest News, Blues, and a Tightened Noose
How Many Ultra-Premium Cards Do You Have in Your Wallet? →
0 0 votes
Article Rating
Subscribe
Login

So how did you find out about this area in the first place, being lazy and all?

I guess you were there with your Portugese-speaking brother, who helped ease the interactions with the locals. What I wonder is if travel there would be a problem if one only speaks English? (Also–and I dont mean to be rude–is Brazil in general kind of a place to cautious about hassles if you look foreign…ala Morocco or Egypt?

Tony, I’ll let you in on a little secret. I’m not really lazy. The name of my blog is a subliminal message to my fellow travelers — take it easy and don’t spend your life doing MS at Walmarts, that’s all. BC, that’s a loaded question. First, my cuz Timmy doesn’t speak a word of Portuguese, you’ve probably misread something. 🙂 I do get by in Brazil (when I have to) on a very primitive level — money, directions, simple emotions, stuff like that. You’re right — very few people around Lensois speak English, and they don’t have a reason… Read more »

Thanks, Andy. Sorry about thinking your bro spoke Portugese…maybe Im thinking of TBB or some other blogger. Anyway, good to hear that you get around fine in Brazil. I wasn’t necessarily thinking of hassles due to discrimination but more from a safety and/or hassle aspect. My Brazilian friend told me, for example, that he didn’t think Sao Paulo or Rio was safe for a gringo to walk around in. (Too much of a target for pickpockets, peddlers, etc.) In any case, I’m very glad to hear that you got along okay. I’m perfectly okay with them not speaking English—I think… Read more »

Rio is probably more dangerous than an average big U.S. city, but I’ve found that your average well-to-do cariocas tend to be a bit panicky about their own city. I remember many years ago, a landlady begged me not to take a bus in Rio because a few months before a bus had gotten hijacked. She also begged me not to go downtown because “it was full of bandits.” I don’t know, but after not having become a crime victim after about a dozen trips to Brazil, I take their advice with a grain of salt. This time around I… Read more »

How was the water?