UPDATE: 03/01/16. It seems they’ve fixed the problem and you can book Nordic hotels on points once again.

Choice Hotels in Scandinavia Can Be Booked on Points Again!

Devaluation is not just raising the price of point redemptions. That would be too simplistic.

When a hotel or an airline increases redemption levels, you still have a chance to book a room or a flight at an inflated rate.

When a hotel or airline removes availability altogether, it’s much worse than that. You’re left with no options. That’s what Choice Privileges has done. It has apparently removed availability not for a hotel or a group of hotels, but for the whole geographical region. Scandinavia is not bookable on points anymore.

Has any other hotel chain done anything like that ever? I don’t think so.

And the “best” part is how quiet they are about it. Not a peep. Not a single email. Not a slightest change in their T&C reflecting that their members have lost the ability to book at 200 hotels (or if there are any T&C changes, I haven’t found them).

All I can say is wow!

The Choice Priorities Program is a modern reincarnation of Doctor Jekyll and Mr. Hyde.

On one hand, there are low redemption rates in some major international cities around the world, starting at 8,000 points.

On another, there are ridiculously overpriced properties in the U.S., lack of ways to earn points, bad expiration policy, and the most terrible con of them all: extremely short redemption window. You can only redeem points from 30 (domestically) to 60 (internationally) days away from your stay, which makes any kind of advance planning next to impossible. Elite Gold status only extends the domestic window to 50 days.

But despite all these shortcomings, point aficionados have valued the Choice points quite highly since you could get a $300 a night hotel room in, say, Sweden, Denmark, or Norway for 8-15K points.

There are serious indications that all Scandinavian properties have been taken out of the reach for North American members.

How I found out

I’m going to the TBEX conference in Stockholm in July. I’m booked at two Radissons (the now defunct 2-for-one-night deal), but I would need to spend the fifth night in Stockholm, and thought that one of the 8,000-point Arlanda Choice hotels would be perfect for that particular goal. Here is the greeting I got at the Choice website. 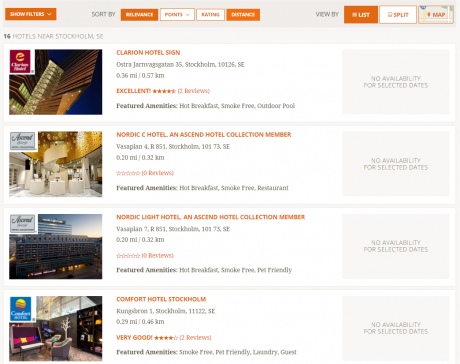 Trust me, the dates don’t matter. There are 16 Choice properties listed in and around Stockholm so I couldn’t fit them all in my screenshot, but the picture is the same. There is simply no availability for any dates. 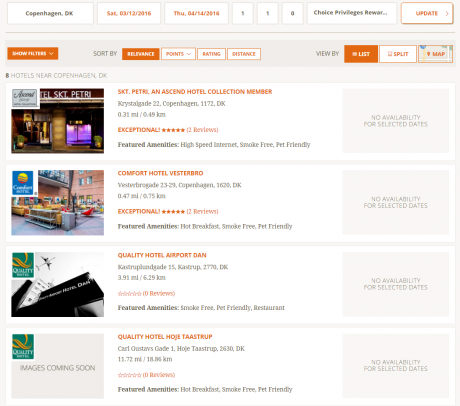 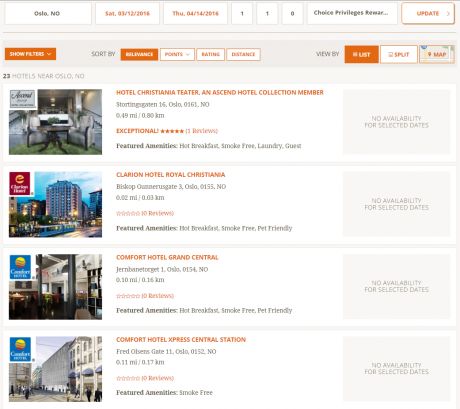 Once again, the dates or length of stay don’t matter. The picture remains the same.

This Flyertalk thread revealed further details. According to GUWonder on Flyertalk, redeeming points in North Europe from now on will be restricted to the members of Nordic Choice, which is sort of a separate program within the program. Non-members haven’t been able to earn points in Scandinavia for quite a while if ever, but redeeming was not a problem until recently.

I wouldn’t be surprised if this was a decision from Nordic Choice management related to substantial currency shifts and a weakening economic situation/outlook, more so in Norway than in Sweden. [Denmark was already thin/marginal for Nordic Choice.]

Only 9 hotels in Nordic Choice are Ascend Hotel Collection properties, and they were already rather miserly in making award night space available — at least relative to the vast majority of Nordic Choice hotels.

Sdsearch suggested that the issue was not limited to Scandinavia, as he ran into the same problem trying to book in Japan. I was able to find some availability in Tokyo which makes me believe, this is a very specific issue.

There is no notification on the Choice’s website, nor have there been any emails alerting members that their points would be worth a lot less. At least I didn’t receive any, and I’ve never heard that anyone has. It’s business as usual, all around. It boggles the mind that for all their social media hoopla, companies have nowadays become more secretive than ever.

Of course, companies and businesses are usually free to make any changes to their loyalty programs. You run the numbers, you see that certain things need to be tweaked, and you go ahead and do it even if it affects your customers in such a negative way (what doesn’t?).

And yes, they make sure to inform us  they can do anything without notice—that’s why they have those legal departments in the first place. Now, whether or not they should feel free to use this privilege (pan intended) is an entirely different matter.

The mere nature of what loyalty program is all about suggests that the company tries to avoid pissing off their customers. Maybe that’s what they think they are doing by withholding information about this massive and terrible devaluation.

I think they couldn’t be more wrong. Communicating changes, even as bad as this one, to their members is unpleasant, but necessary. Along with providing some avenues for recourse, like extending the booking windows for affected properties.

Doing it the Choice way is cowardly and arrogant at the same time. Go figure!

Unless it’s all just a technical fluke, which should’ve been communicated as well, fingers crossed.

@ChoiceHotels @CP_Rewards it is appalling to remove crucial benefits from your program without telling your members! 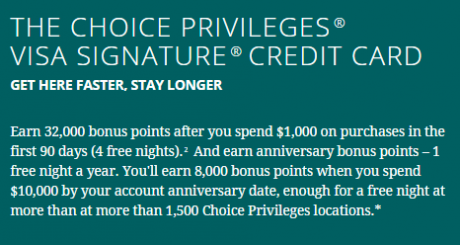 Like I mentioned at the beginning, there are not many avenues to collect the Choice Privileges points. The one was transferring the Amtrak Guest Rewards points at 1:3 ratio, but their recent changes killed this avenue for non-elite Amtrak members. There is however, another way. a Barclays credit card that offers a 32,000-point sign up bonus—not much, but better than nothing. Up until recently the condition for getting the full 32,000-point bonus was a one-night stay at a Choice properties. That condition has been scrapped, and replaced with spending $1,000 in 3 months. I don’t know exactly when it happened, but it’s good news. Much more streamlined and doesn’t make you jump through the hoops. So if you are craving some “extramarital” Choice points, this is the only viable way to go.

Barclaycard Choice Privileges 32,000 Points After $1,000 In Spend (No Stay Requirements) - Doctor Of Credit

[…] Europe are much better. The ones in Scandinavia were the best value in my opinion, but according to Lazy Travelers these can no longer be […]

Thanks for heads up! I agree with you completely. Companies are free to do whatever they wish, but they owe their members a decent notice on those changes. I don’t care what T and C says, doing otherwise is just plain wrong. This is why I avoid collecting hotel points speculatively unless I can get them super cheap. I’ve seen stuff like that happen far too many times. Choice program is probably the worst and least trustworthy. I did get tremendous value from it over the years but I would never consider using their credit card for everyday spending. Actually,… Read more »

[…] Traveler informs about a stealth mega devaluation in the Choice Privileges loyalty program. As in wiping out all availability in Scandinavia. Seriously? Or technical glitch? […]

Andy, I can’t help but wonder if you overreacted on this one. IME, Choice Hotels does not let you book an award stay more than 60 days out. (90 if you are elite member.)

So, what you experience is normal.

If I were you, CALL them up and verify this.

BTW, I ran into this “problem” in the UK, when I tried to book a room 60+ days out and nothing was showing. When I tried, the next day (which by luck was 60 days out), it worked! So I called to ask what’s up and then they reminded me of the 60-day rule.

Bluecat, no, there is no availability for any dates including just a few days out. Check my screenshots. The best we can hope for is a technical glitch, but judging by what I’ve read I’m afraid it isn’t.

600 Free Marriott Points, 15% Off Silvercar, and Finally an A380 Gate for Chicago O'Hare - View from the Wing

[…] Has Choice Privileges removed the option to redeem points for hotels in Northern Europe? […]

Choice always had a crappy program. Don’t know why anyone cares that it’s even crappier now.

It is crappy indeed except for the good stuff. Every crappy program has something good and decent about it. 🙂

I agree with you. Choice’s US hotels are crap and over-priced, their International Hotels are also way over-priced except Rome and Scand.
I cancelled Barclays Choice credit card even though it was a no-fee card. I basically can’t use the points since Choice don’t value any loyalty.
Last year they removed the Bahamas Atlantis from their redemption and now Scandinavian hotels.
That’s why “earn and burn rightaway” is the way to go..