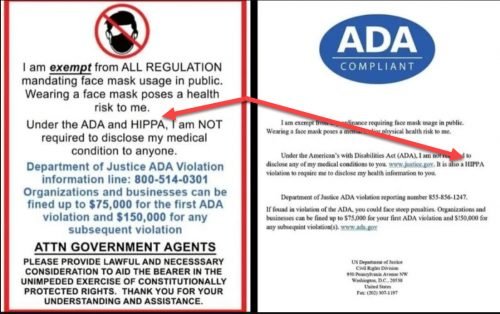 Filed Under: COVID-19, Miles and Points, Misc, Travel News
← There Is One Tropical Paradise Americans Can Visit Right Now
Bermuda Travel Will Resume on July 1, 2020: Here Is What You Want to Know →
0 0 votes
Article Rating
Subscribe
Login

I want to be able to travel again, and I want to do it as safe as possible. Masks are clearly part of the solution. Too bad their use has come to represent a political stance. (I wandered over to OMAAT today and the comments section is exploding with the arguments. Incredible!)

Thanks for your comment bluecat! I’m actually wondering whether it’s really about politics or just an excuse for being a big baby in many cases.

Ha! Each person who read your “big baby” comment was just caught thinking “yeah, that describes the guys who are not doing the same as me” (both the mask and no-maskers)

LOL, I hear ya, but not wearing a mask is easier and less taxing than wearing it, so they’re babies, not us, mask-wearing folks. 🙂

I do wish airline would enforce their mask requirements better (I was on a plane yesterday behind someone wearing his mask as a sleeping mask) and there does seem to be some evidence cloth masks help, at least when worn properly (and N95 masks help even more, though are even harder to wear properly and uncomfortable to boot).   While the image you lead with is illustrative of the point we are all better off when all wear masks, the numbers in that image are basically pulled out of thin air and almost certainly dramatically overstate the contributions of masks.… Read more »

Neil, thank you for your thoughtful comment. I promise I’ll research the numbers in that image some more, but there are several issues in the Reuters article IMHO. 1. They are talking about cloth masks. But I’m not talking about cloth masks. Cloth masks offer very little protection (better than nothing, but little). I’m advocating face/medical/surgical masks. There is no shortage of them anymore and they provide a much better protection. There are no reasons to wear inadequate face coverings anymore. 2. CDC is about to release new guidance on masks. I suspect the guidance will be in line with… Read more »

Agree with your points – as mentioned I just dislike the image being treated as the gospel. I’ve seen it around town for a few months and grimace every time. Overstating one’s points just allows the skeptical to tune.   Only thing I’d add is that whatever the situation with cloth masks vs medical masks vs N95 masks is that the airlines are (I believe) only requiring face coverings. Certainly on my two flights this weekend I’d guess half the passengers had cloth masks or other improvised face coverings while the rest had a range of surgical masks, N95 masks,… Read more »

Neil — still trying to get more info in terms of these numbers and will go wherever they lead me. In terms of N95, there are quite a few problems with using them on an airline: 1) they are very expensive (the genuine ones) 2) they are very difficult to breeze in for several hours 3) people need to be trained to wear them correctly — otherwise, they’re not more effective than face masks 4) they really need to be prioritized for front line workers (there is still a shortage) In my opinion a face mask is that golden medium… Read more »