Marriott has finally announced the real date for the transition to the new program and corresponding changes to their rewards chart.

Changes are closer than ever: see them now.

This is, of course, a mathematical impossibility. I’d say the changes were closer when, according to Marriott’s previous statements, they were to be implemented on August 1. But who’s complaining? Au contraire, this delay is welcome news, since we now have 3 more weeks to finalize our travel plans and make a decision. Yey!

The number 1 Colombian destination for U.S. travelers is Cartagena, which is, unfortunately, marriottless, but the next 2 great cities to explore, Bogota and Medellin, have a few options. I visited Bogota about 1.5 months ago and enjoyed it a lot. The weather was phenomenally pleasant after the scorching Cartagena sun, and the city offers quite enough in terms of cultural and historic explorations to warrant a visit. There are 4 cheap options for a Marriott stay in Bogota.

Four Points is arguably the best cheap hotel in Bogota. It’s close to Park 93 and Zona Rosa (no, it’s not a red-light district), and from what I’ve gathered from the reviews, it offers free breakfast to everyone, although it’s not advertised. It’s also cheap on cash rates, but even a $75 rate gives you a great $0.01 per point redemption after the August changes.

Sheraton Bogota and Bogota Marriott, from my understanding, are not in the touristy areas of Bogota. They might be excellent hotels, but you’ll have to grab a cab wherever you go.

The Artisan D.C. might be your best bet when you want to splurge a little while still saving points. I walked there while staying at JW Marriott (which will be 25,000 points after the changes), and loved its sophisticated, yet down-to-earth lobby! The Artisan will soon cost 17,500 points, 3,500 points down from the current rate. 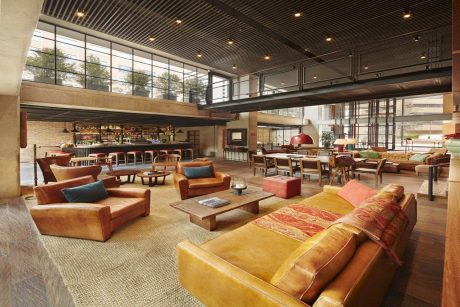 Both Medellin hotels are located in or close to the popular Poblado area, but they are both going up in points in August.

There are also 2 cheap hotels in Cali. Add Barranquilla (the site of one of the biggest Carnivals in the world) and Santa Marta, which are popular tourist destinations within driving distance from Cartagena.

Most people stay in Guayaquil overnight on the way to or from the Galapagos. Both Courtyard and Sheraton are located very close to the airport; both offer a free shuttle; and both are often available on very cheap cash rates, which makes Courtyard a somewhat better redemption points-wise.

Having said that, Sheraton is certainly poshier, and if you want to splurge a little, there is no law against it. Just check the cash rate first to see if it isn’t a better deal. 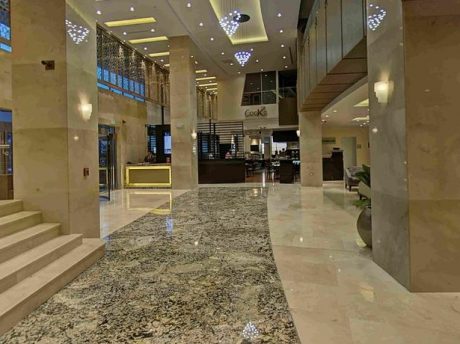 I’m very partial to Sheraton, Lima for 2 reasons. First, I love the Lima Centro. The Sheraton is just a 10-minute walk to Plaza Mayor, Plaza San Martin, Lima Cathedral, and many historic buildings, not to mention great cafes and restaurants. In addition, on my 2 visits they twice upgraded me (lowly SPG Gold) to an excellent Junior Suite with lounge access. Hell, even my status-less cousin Timmy got access to the lounge – don’t know if it was an error or not. 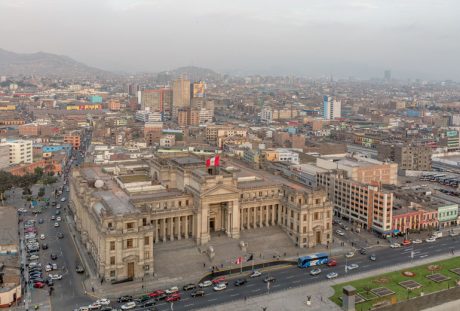 On the downside, the pollution in Lima center and even inside this hotel is off the charts. Don’t go if you have any respiratory issues, I kid you not.

Most folks will enjoy Miraflores better. Miraflores is a very nice seaside neighborhood and most tourists stay there. But whatever you do, book fast, since both hotels are going up in points in August.

If you’re headed to Peru, I’m begging you – do stay in Lima for more than an obligatory 1 night before moving on to Machu Picchu or the Amazon! Explore the historical center, Miraflores, and the bohemian district of Barranco – as well as the world-famous Lima fusion food scene. You’ll be kicking yourself back home (watching all these TV foodie shows) that you missed out on an amazing opportunity to try inventive and mouth-watering dishes for a little fraction of what it would cost in the U.S.

Sorry if the above sounds like advertising. Yes, I love Lima, and no, no one’s paying me to say that (I wish!).

Brazil is my most favorite country in South America if not the world (and my next destination, too).

Unfortunately, the Marriott pickings in Brazil are pretty slim, to put it gently. Of course, there is oceanfront JW Marriott in Copacabana, but it will set you back 35,000 points.

I can’t recommend either Residence Inn or Courtyard to anyone who wants to explore Rio. Barra da Tijuca is just too damn far away from everything, and even more so in typical Rio traffic.

Sheraton Reserva do Paiva looks like a good place if you find yourself in Recife. It’s very close to the beaches, and Recife is just 30 minutes away, but you can often book this hotel for under $100. Not worth the points, IMHO.

The other 2 hotels look more interesting. Vitoria, the capital of the state of Espirito Santo, is worth visiting, and the beachfront Sheraton is centrally located in front of Praia do Canto. Furthermore, the rooms at this hotel can often go north of $100, so 9,000 points is a bargain. Even 12,500 can occasionally be a good deal. 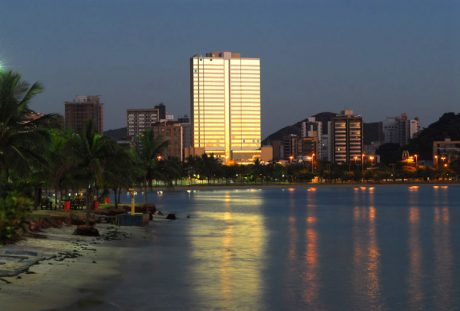 Hotel & Spa do Vinho is a luxurious hotel in Bento Gonçalves, the wine capital of Brazil, and a place to go if you want to try some great wines, get away from the beaches, and experience the “other” Brazil. If you’ve never heard of Bento Gonçalves and its fine Brazilian wines, you’re not alone, but you will – and soon. 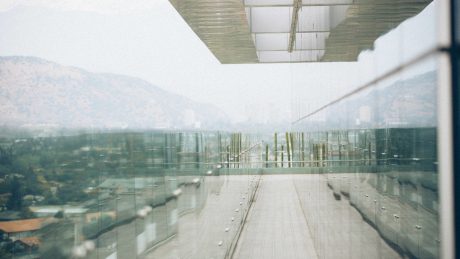 All 3 Santiago hotels are in Providencia, close to Las Condes – that’s away from the downtown, but Providencia is a good neighborhood (or rather suburb) to stay in, with many great nightlife options. Each hotel will cost 17,500 points after the August changes. 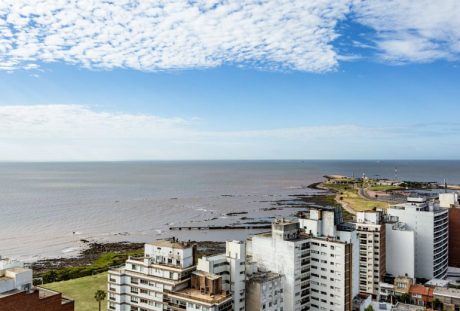 A View from the Aloft Montevideo Hotel

As you can see, Aloft is going down a whopping 9,500 points, but you can’t go wrong with either hotel.

I have to admit, I know absolutely nothing about the following cities, and I’ve never talked to somebody who’s been there. Besides, it’s getting late, so I’m just going to throw in a few thoughts from other people.

Cordoba made it as a Cultural Capital of the Americas in 2006. The Rough Guides believes Cordoba is seriously underrated as a travel destination.

Mendoza is the heart of Argentina’s Wine Country, and, according to Lonely Planet, a “bustling
city of wide, leafy avenues, atmospheric plazas and cosmopolitan cafes.”

“Salta already comes from an indigenous Aymara word meaning ‘beautiful,’ says Fodor, but “for the country’s finest colonial city, it’s worth stating twice. Walking among its well-preserved 18th- and 19th-century buildings, single-story houses, and narrow streets, you could easily forget that this is a city of more than half a million people.” 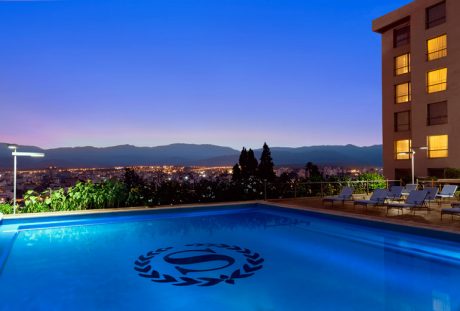 Not surprisingly, Santa Cruz is probably the most prosperous and touristy Bolivian city. It has tropical climate and colonial architecture, but its best assets are of out-of-town day-tour options: waterfalls, national parks, pre-Incan ruins, and more. 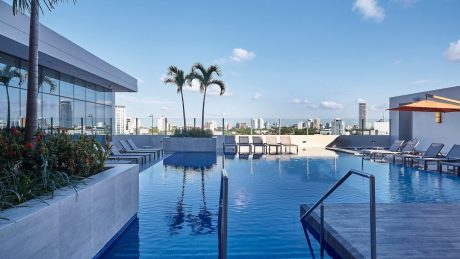 Once again – never book a hotel room on points until you check the cash booking rates (including taxes) on the dates you’re going to stay there. Check several sources, too; sometimes the hotel will offer the best price, and other times it won’t. If you can find a better rate elsewhere, Marriott will price-match and give you a “25% discount on the room or 5,000 Marriott Rewards points.” Then check if redeeming points is still a better option.

Have you been to any of these or other cheap Marriott hotels in South America?

Filed Under: Bargains, Cheap Travel, Miles and Points, Miles and Points Trip Ideas
← New IHG PointBreaks Hotels Are Bookable Until September 30 — Yes, There Are Some Interesting Choices
The Chase Ritz Carlton Card Is DEAD, Sweet Citi Prestige Retention Offer, My Other Credit Card Musings, and How to Lose a Bunch of Your Email Subscribers in One Day →
0 0 votes
Article Rating
Subscribe
Login

I need to book a room in the same hotel,how much would be cost for a month

Not sure I understand which hotel you’re referring to.