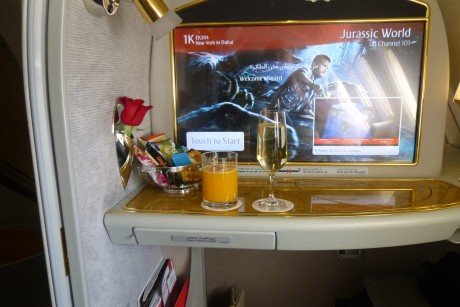 The Emirates First Class Review is the first in my series of recent trip reviews. It’s kind of funny that I’m doing it before writing a report on my previous trip, but it is what it is, while it’s still fresh in my memory. Here is my itinerary.

Is it worth it?

There are two schools of thought on Emirates suites. Those who believe that flying in a First Class suite on Emirates is worth selling your firstborn. And those who don’t believe that it’s worth even four measly BofA Alaska credit card applications.

I respectfully disagree with both. My firstborn stays. The Alaska plastic, however, is a renewable resource—for now, at least. It’s totally worth it if only for saying been there done that. Totally!

So, been there, done that. Here!

The funny thing is, while I’ve been in this hobby for about 15 years, I hadn’t flown in first or business class until 2009. Back then, I was planning a Mardi Gras trip and booked a first class ticket to try and cure my wife’s fear of flying (didn’t work, by the way). Back then, I wasn’t even sure what to expect, and I remember asking on Flyertalk if the alcohol was free. Oh, the days of innocence!

Since then, I’ve indulged and overindulged, but mostly with international business class, not first. Up to date, I’ve only flown three first class suites products:

Cathay Pacific doesn’t have the door, so it’s out. Yes, I know, amazing food, but I had caught a bug in Thailand, was stuffed with medication, and couldn’t taste anything. And no doors! Out!

It’s a much tougher choice between Asiana and Emirates. Much tougher! Want to know who wins in my humble opinion? I’ll tell you who, but first… 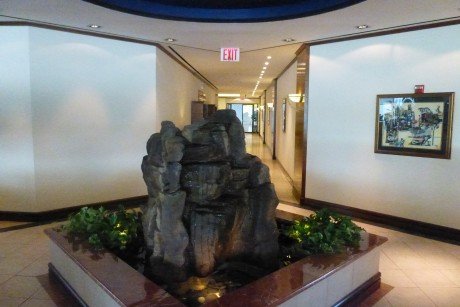 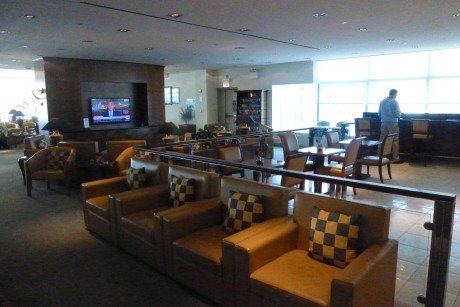 Tried two different omelets that were cold and tasted like shoes. The eggs benedict next to them were terrific. Got a couple to [over] compensate for the previous disappointment.

Spotted Veuve Clicquot. Got a glass. I remember having tried Veuve Clicquot before and not  liked it, but how does it stop one from having a $30 glass of Champagne for breakfast, right? 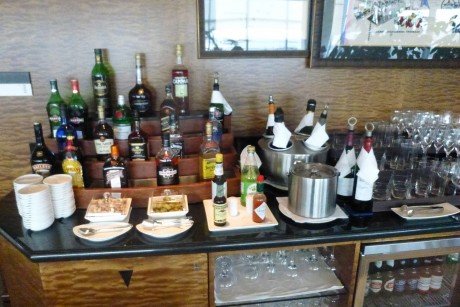 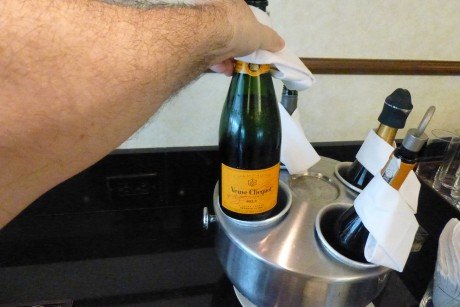 Grabbed some coffee, and sat down to see the tarmac and catch up on my email, and soon was invited to board, right from the lounge.

You walk down the gate bridge to a huge shiny bird in front of you making a few bad snaps along the way. Passengers behind you are kind and patient, waiting till you’re done with your jabs at fine photography. 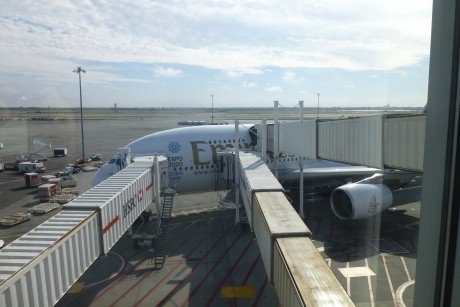 The Bridgegate to my Emirates JFK-DXB flight: My seat is on the left 🙂

You get greeted by every stewardess as the most important person in their life. You’re shown to your seat, slightly surprised that the seat is a bit narrow. Not to the point of being uncomfortable—just, you know, not too much wiggle room for a hmm, big-framed dude like yours truly. A stewardess brings up a tray with champagne and orange juice and you grab both to mix yourself a Mimosa (because why not, right?). Then you’re up in the air, and Dom starts flowing freely. You have tried Dom in the past and liked it no more than Veuve (meaning, you don’t), but you still get a glass (because why the hell not, right?), only to realize that you’d rather have a cheap demi-sec sparkling wine to one of the finest Champagnes in the world. Wine connoisseur, you ain’t! Oh well… 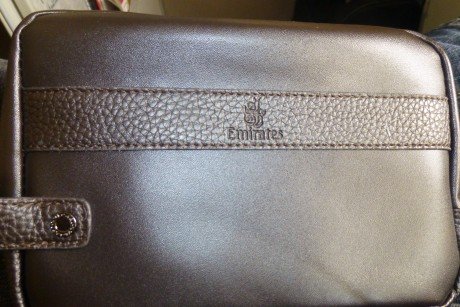 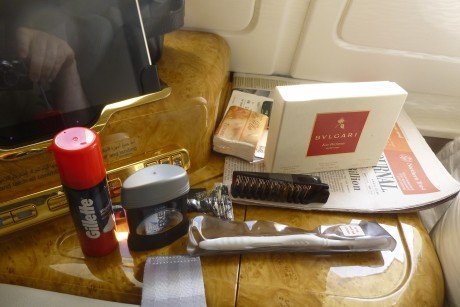 You get to the food service (the full menu is in the link below) and then the caviar arrives. Let me make a little detour here. Although I wouldn’t know a good wine, even if it hit me in the face, I know a thing or two about caviar—there is a way it gets served, and then there is a different way to eat it. Bear with me. By the way, I ordered the seared tuna for my main meal and didn’t like it at all! So avoid… probably. The Arabic Mezze was excellent, though!

How NOT to eat caviar

They serve it with chopped eggs, (whites and yellows), chopped onion (WTF!), pancake blinis, sour cream, and lemon. Here is the thing. Dump everything but the blinis and the caviar.

Next, you have a choice. You can ask them for warm bread and butter, or for more blinis and butter, but I prefer bread. When they bring you a basket with rolls, choose the plainest, so nothing distracts you from the taste of the caviar. You spread the butter thinly on bread, spread caviar on top of it, shut your eyes and disengage from the outside world. Make a few bites and take a moment to still savor the aftertaste when you’re done.

I don’t know who was the first idiot who had come up with an idea that caviar needs garnishing, but I would kick their teeth out if they got anywhere near me. I think it’s that stupid desire of restaurateurs and the Food Channel to turn every meal into a visual feast to justify the price tag. You don’t need this justification with caviar; the simpler—the better.

Which means that there is even a better way how to eat caviar, and that’s to eat caviar with a spoon (experts recommend to avoid metal, although I don’t feel the aftertaste). The problem is, you can’t go to town on it with the portions they serve. If you ever want to try caviar this way without refinancing your mortgage, try red caviar (or salmon roe as it’s also known). This type is immensely popular in Russia, but not nearly as popular in the rest of the world. Red caviar is really delicious, and the price tag won’t kill you when you dive right in with a spoon.

And for the love of god, no, caviar does not pair with wine or anything else but plain water! Of course, Russians pair it with vodka, but we can pair anything with vodka. Don’t do this!

The Emirates entertainment system is top-notch, but unlike previous reviewers, I didn’t like the tablet remote. I found the controls a bit clunky and not intuitive. The choices, on the other hand, are mammoth. I ended up watching Better Call Saul, the spin-off of Breaking Bad. I had been delaying watching the show, because I would be disappointed after Breaking Bad—the Best TV Drama Ever! But I was not. It’s a great show, and between two flights I almost finished the First Season. 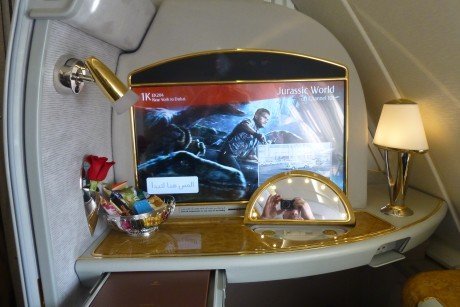 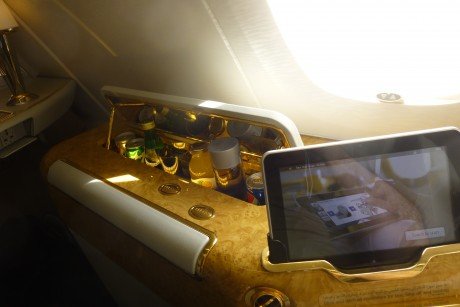 Despite many months of rumors of its upcoming demise, Hennessy Paradis is still going strong. You must point them out to the bar in the front of the plane, or they will bring you the Prive. It was such a traumatic DYKWIM moment to me, how dare they!

Unlike the Veuve and Dom, I had never tried Paradis before, and I probably won’t again for more reasons than one. Told ya, I’m a rube. Fine alcohol is just wasted on me. Oh, well…

OK, I have nothing to add to what has been said already. Emirates restrooms are unreal. You walk into the restroom, and oh my god! You will bite your tongue if you call it a lavatory, or I’ll bite it for you. It really is a rest room! And the floor? I didn’t have to touch the control, because it was always warm. Jesus! 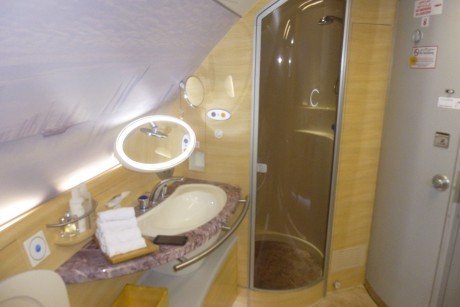 And everyone who says how 5 minutes of hot shower invigorate you after spending time in a metal tube is right. Sorry, no selfies.

One Day in Dubai

Filed Under: Miles and Points
← 10.04.15-10.11.15 Miles and Points Deals and News Roundup
Back in the Game—Miles, Points and Credit Cards →
0 0 votes
Article Rating
Subscribe
Login

Andy,
Great startup post for the trip! Did you use Alaska Miles and How many for the first class flight?
Looking toward to reading about the rest of the trip. ?

Thanks John. Yes, Alaska! 90K will take you to Dubai, but only 10K more will get you to Asia with a stopover in Dubai if you wish. One thing I regret, though, is not staying the night. Would’ve been more relaxed and not as hurried because I was exhausted!

Nice Andy, so for 100k Alaska you are flying Emirates FC with stopover in Dubai and then off to Bangkok on same airline and class? I can relate to the exhausted felling, Andy.
Real nice planning…I am looking forward to learn and read more.
Happy Travels

Yes, exactly! And since the stopover in Dubai is included anyway, I should’ve spent the night instead of rushing around like crazy. It was actually stupid planning. I just tend to forget I’m not that kid anymore 🙁

Fun reading, as usual! Congratulations, Andy, on fulfilling this little dream of yours!

One Day in Dubai | The Lazy Traveler's Handbook