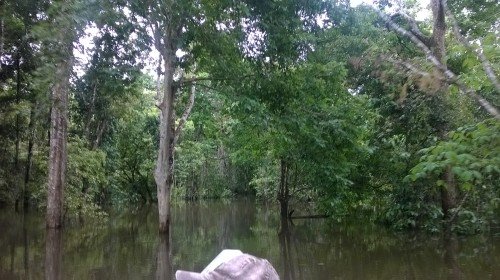 We flew to Manaus from Rio on TAM on 06.16. Since TAM is a One World partner now, and since we managed to get a direct flight, I redeemed our seats for 7,500 Avios each. A great bargain in my book.

Manaus has got to be the most humid place I have ever visited.

Granted, I haven’t been everywhere, but I have experienced hot and humid before, and nothing comes close to Manaus, in my opinion. Not Rio, not Mexico, not the Dominican Republic, or Thailand. So hot and humid this city is that they play the World Cup games at 6PM. At 6, it starts getting bearable, well, somewhat.

If you are not in Manaus on business or for the World Cup, then you are here for the Amazon. There are all kinds of tours and excursions, from the most touristy 6-hour boat rides to Amazon cruises; and to some serious expeditions that stretch for days. We had to opt for the easiest tour. Our game ticket was on the third day of our stay, and we just couldn’t work out the logistics for a two-day trip; we wouldn’t have made it in time. Still the ride was wonderful (later about that).

I wish I could say there are tours for every budget, et cetera–you know the kind of promises tourist booklets love to give out like candy–but I can’t. Manaus is costly. Even worse than costly–it is unreasonably costly. I know there must be people out there who love this city and enjoy what it has to offer, but this is my blog, and I am stating my opinions. Manaus is a large, poor, dirty, and grossly mismanaged Latin American city that doesn’t have much going for it nowadays. Sure, they have a beautifully restored Teatro Amazonas, which is the replica of the Paris Opera. There are also a few nicely restored old buildings in the vicinity of the Central Square.

Teatro Amazonas is beautiful indeed, and really worth a visit! Do yourself a favor, though: read the Wiki page and opt for a R$10 ticket. There is a guided $R20 tour in English, but Wiki had told us most of the things we later heard from the guide, and also a few we didn’t.

My exterior shot does not do justice to this beautiful building, so thank god for stock photography 🙂 My other shots are OK, I think. 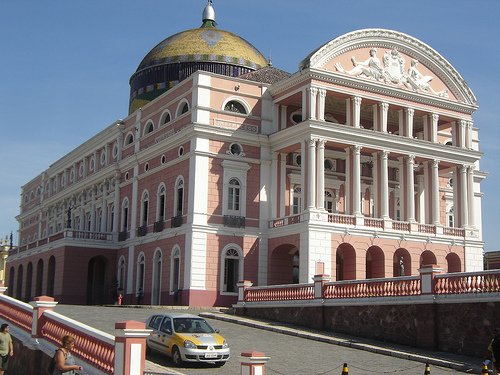 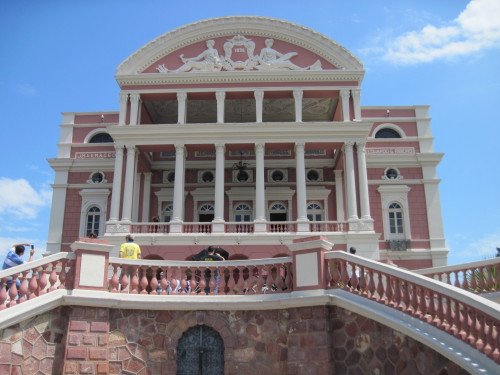 The sculpture in front of the theater. 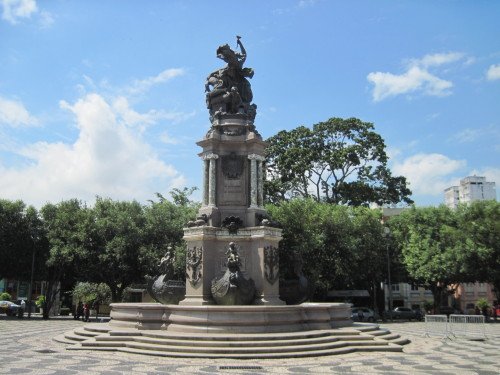 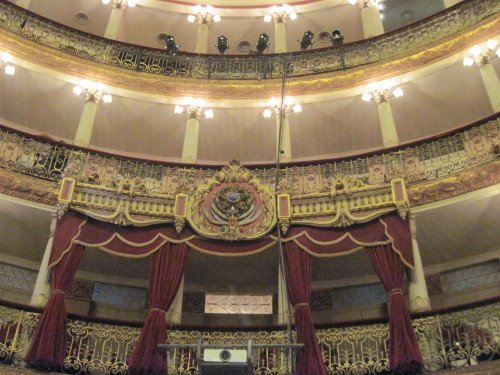 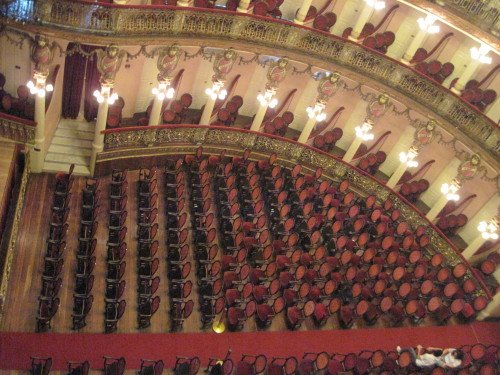 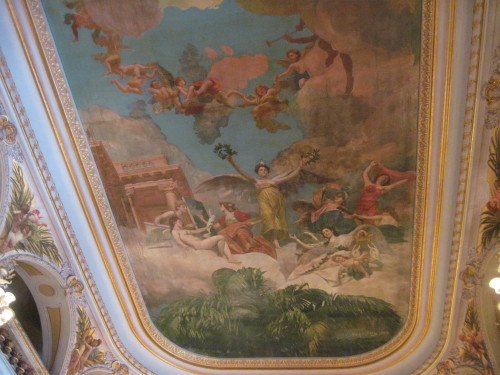 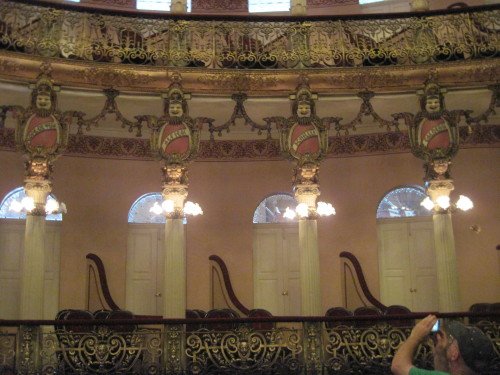 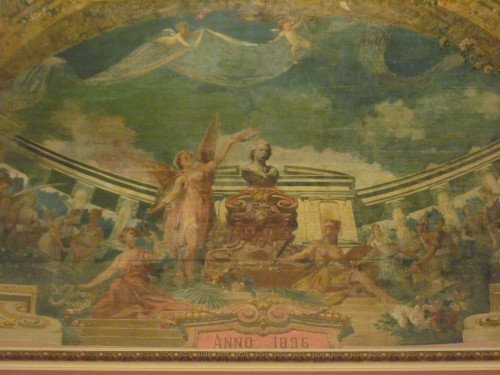 Legoland used to have a factory in the Amazon. This is a miniature replica built from 30,000 pieces. 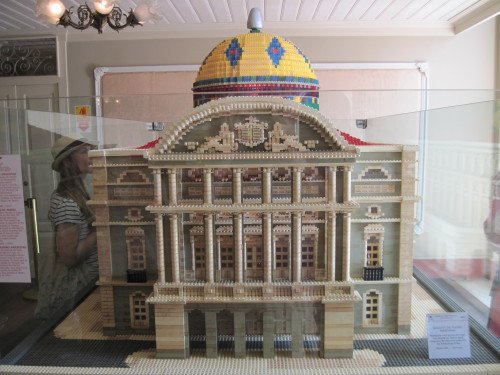 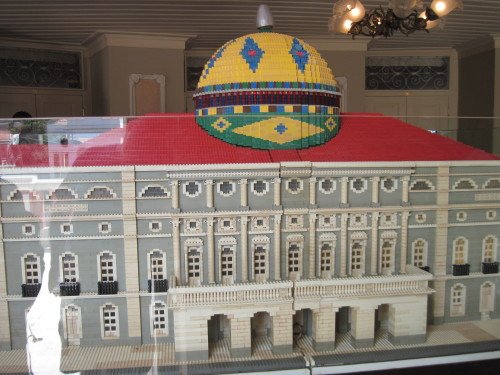 There are a few beautifully restored old buildings in close proximity to the theater, too. 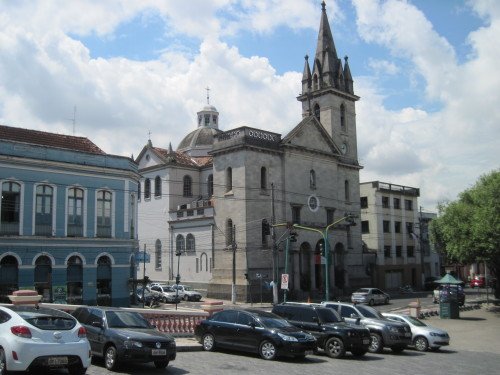 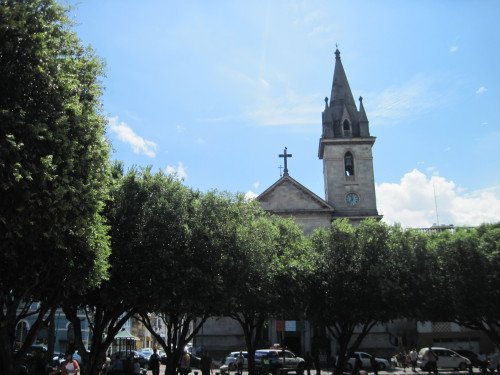 Beautifully restored market in the port, although the exterior looks looks somewhat like a movie set. 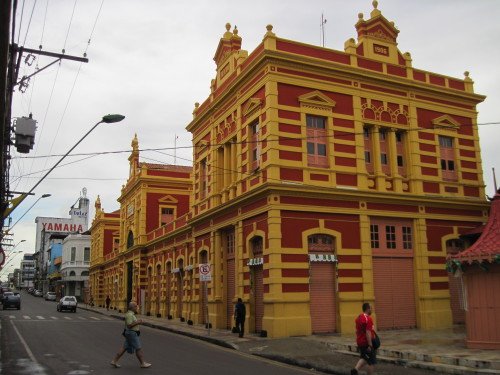 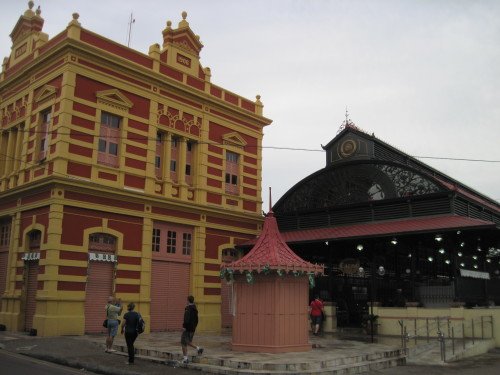 Unfortunately, most of the city is nothing like that. Most of the city you’ll see will look like this. Not exactly the stuff you find in travel brochures. 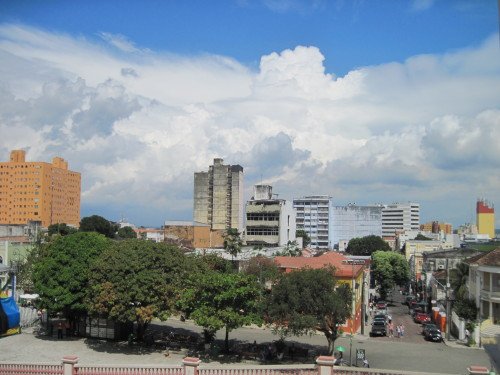 The city has The Botanical Garden, the Zoo, and a few museums. They also claim to have the largest urban forest in the world, although I vividly remember that Rio claims the same honor for Floresta da Tijuca. A few nice places and buildings, however, were not enough to hold my interest, and I suspect most tourists in Manaus will feel the same way.

Manaus that used to be one of the most prosperous cities on earth during the heydays of the rubber boom; this “Paris of the Tropics” where the rich and famous of Europe would flock in hordes to show off the latest fashions, have long fallen into neglect. The statistics states that Manaus is the 6th richest city in Brazil. If that is true, then I don’t know where all the wealth goes. Wherever you walk, there is dirt, there is disrepair, and there is poverty. I’m not talking about favelas. I am talking about the center of the city, which is the capital of the state, the free economic zone, and one of the World Cup venues. They should be doing better than this!

Filed Under: Trip Reports
← I’m Back From Brazil/USA vs Portugal 2:2–We Were So Close!/Vanilla is Dead/North Korea, Anyone?
“Reach for the Miles” New York Meet Up! →
0 0 votes
Article Rating
Subscribe
Login