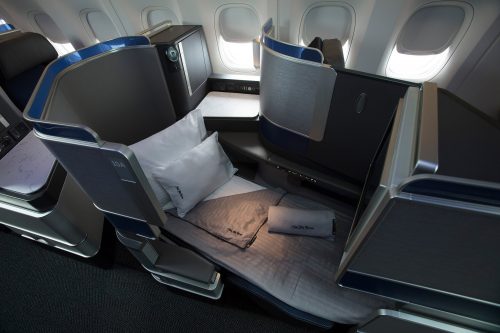 IMPORTANT UPDATE: You can now redeem Turkish partners’ awards over the phone. This is yet another game changer because the Turkish award chart has some amazing and very unique sweet spots. HT Nick @Frequent Miler and VFTW.

Recently Nick Reyes from Frequent Flyer shared an amazing find: some time ago, the Turkish Miles and Smiles program had put Hawaii (at least Honolulu) in the region of North America, which made it possible to fly between anywhere in the U.S. and Honolulu for 7,500 miles in Economy or 12,500 in Business.

This is huge! Turkish Airlines is a Citi ThankYou airline partner, and you can easily transfer your points at a 1:1 ratio.

Flying from anywhere in the U.S. including East Coast all the way to Hawaii for 7,500 miles and $6 in taxes is the kind of value that validates the idea of traveling for free. I don’t believe it gets closer to free than that, at least I can’t imagine how.

Unfortunately, trying to find a United Business Class award seat to Hawaii is an exercise in futility that can tax your sanity big time. You might want to keep some Valium nearby in case of emergency. Or at least, chamomile tea — do not be reckless!

You can and probably have read all about it in Nick’s very detailed write-up, but the Turkish award chart opens up more possibilities. Let’s take a closer look.

Turkish has a reasonable award chart with a few sweet spots in Business from North America. Turkish lists its redemption values per round trip, but one way flights are allowed for 50%. I’ll list one way levels to avoid confusion.

North America includes: Bermuda, Canada, Mexico, United States (including Alaska), Honolulu, and the Dutch Antilles, of which Aruba and Bonaire are the only islands in the region served by United (the Dutch part of St. Maarten is in South America 🙂 ).

The way the Turkish award chart describes the U.S. is a bit weird. It includes Hawaii (at least Honolulu, but possibly other islands as well), Alaska, and the U.S. Virgin Islands, but excludes Puerto Rico (Guam too, but that’s more reasonable).

As great as some of these redemption rates look, there is a problem with Turkish — fuel surcharges. The way it used to be, Turkish added surcharges to everything that flies including United flights in North America, which is something no other airline did, AFAIK. However, according to Nick’s post, it’s no longer the case, as his flight to Hawaii ended up costing him $5.60 in taxes.

I wonder what other changes Turkish has made recently, if any.

12,500 miles for a lie-flat United seat on transcontinental routes

UPDATE 8.3.19: You can still find lie-flat award space from the East Coast (New York and Boston) and California (LA and San Francisco) especially within the next 30 days. I’ve found 3 seats on some days in August from New York (EWR) to San Francisco!

Getting any Business Class seat including old and tired recliner seats for 12,500 miles is already a great deal. Just as a reminder to some folks who are more spoiled than others, 12,500 miles per one way is normally a regular Economy domestic fare. It’s been this way since the inception of frequent flyer programs and it still is what both American and United are charging on most routes when you’re lucky enough to get your flight on a Saver award.

Which is why I personally was surprised to learn that United has quite a few domestic routes with lie-flat First Class cabins.

First, there are 3 transcontinental routes:

Quite honestly, I didn’t expect to find availability on any of these routes, but I was wrong. There is some award space sprinkled around here and there — abysmal, yes, but it does exist, even for 2 people. 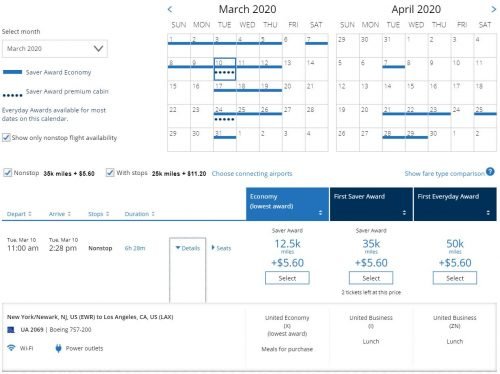 New York to San Francisco looks better if you want to travel this summer. 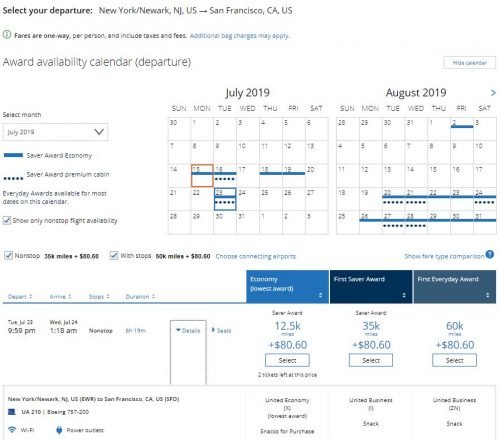 EWR-SFO Business Class availability this summer — not that bad, actually!

San Francisco to New York availability looks even more encouraging, but, again, only if you’re looking for summer travel. Then, it drops dead. I’ve found only 2 more awards from September until the end of the schedule. 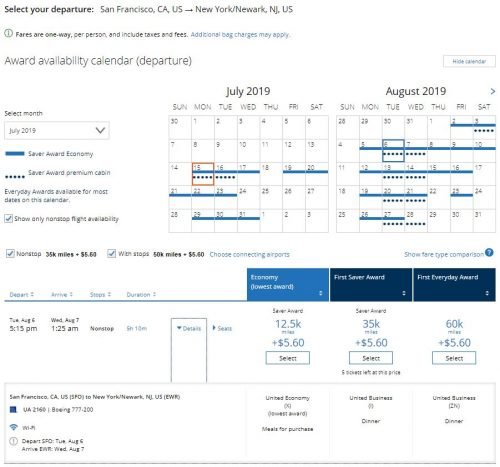 Even better award space FROM SFO

There is some space available between Boston and San Francisco, too, but it’s even sparser.

Then, there are shorter hops. You can find United widebody aircraft with Business Class and, sometimes, First Class cabins on the following routes.

Download the United cargo schedule to see all United widebody routes. Most of them will have lie-flat seats (verify with Seat Guru or/and Seat Maestro). HT to: Point Me to the Plane.

So you can fly anywhere between Alaska and Mexico/Aruba for 10,000 miles in Economy and 15,000 miles in Business provided that the flight is on the same carrier — Turkish doesn’t allow you to mix carriers, alas.

So you can fly, for example, from San Francisco to Cancun for 15,000 miles in Business Class. That’s not going to be a lie-flat seat, mind you, but, well, we can’t always have everything. 🙂 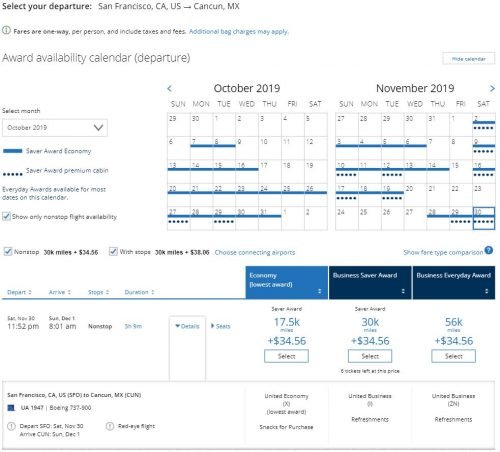 A Business Class award between San Francisco and Cancun won’t put you in a lie-flat seat, but for 15,000 miles it’s still a bargain

UPDATE 8.03.19: I now doubt the scenario below will work. You might be charged for the higher-cost region even if you’re just transiting — DEVELOPING. 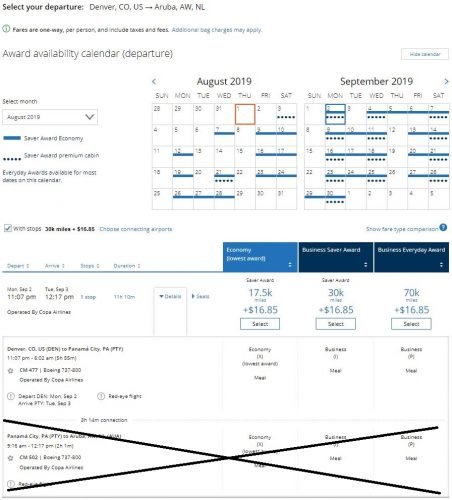 In case you feel hack-ish

Would it work? I don’t know. Does Turkish add fuel surcharges to Copa or Avianca, or Air Canada for that matter? No idea. However, I’m encouraged by Nick’s report that at least the fuel surcharge on United appears to be a thing of the past now.

Ease of Turkish miles redemptions from 1 to 10

Fortunately, it seems no longer to be necessary, as you should be able to book your ticket via email. Please read carefully that link if you’re going to follow that path.

Obviously, this is not as good as booking online or on the phone for 2 reasons. First, transferring ThankYou points is not instantaneous; second, sending an email and getting the response may take another few days, and we all know how fragile Business Class award space can be; we’ve all been there.

This is the reason why I give it an 8. Still beats the hell out of driving to the airport.

So any plans on using Turkish miles on these redemptions or others?

I think fuel surcharges to Latin America are uncommon. In my long term planning I’ve often intended to save miles I have with airlines that often charge high fuel surcharges to use in Latin America. There certainly are some interesting possibilities in the “north america” as you’ve described. I used Turkish miles for the first time a couple months ago and was pretty happy with the price. IST>ORD was 45k and $200 (business), while ABJ>IST was 20k (business). The interesting thing about flying from West Africa was that coach was 10k. Anytime it’s such a small difference to go up… Read more »

That ABJ-IST flight sounds like a fantastic deal! In terms of YQ to Americas, yes, it’s almost unheard of, but I know Turkish USED TO add them to domestic U.S. flights. Apparently it’s not anymore, but I just don’t have enough info to be sure it doesn’t add them anywhere in the Americas.

I have an account with zero miles. Does anything else transfer to Turkish besides Citi?

How do you pay the taxes through email? Surely you don’t have to put all your credit card info in there and email off into someone’s inbox somewhere?

A few days ago, I spent a fair bit of time checking from my home airport to HNL next year from January through the end of schedule and came up with zero availability for my wife and I in business. Likewise from ORD. I didn’t expect gobs of availability, but did think the availability would be better than nothing. That Valium is starting to sound good. Any suggestions (about finding space on the flights, not the Valium)?

I hear you. This is why I focused on transatlantic routes where it is actually possible to find Business Class unlike Hawaii. The only lie-flat seats I’d ever managed to find to Hawaii was LAX-OGG on August 4, BUT it was an equipment change to 757-200 (they normally fly 737s and 753s on this route). But if you don’t mind recliners seats for a 5.5 hour flight for 12,500 miles, they’re wide-open in August.

Actually all four airports in Nether Antilles are also list in south america separately as “aruba” etc. Not sure if they are classified as both north or south america like Hawaii, or just a simple mistake making us unable to redeem US to Aruba for 15.