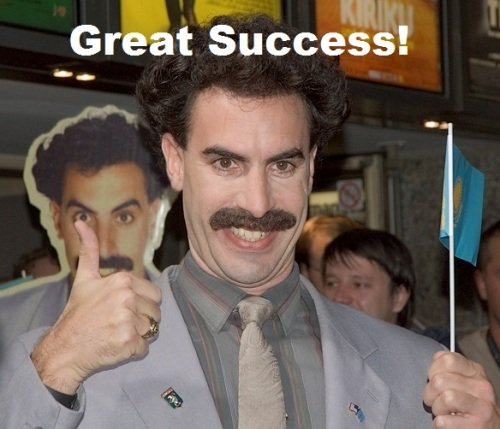 Yeah, what he said!

My latest app-o-Rama went sour at first, after I got denied by Chase for two credit cards: British Airways and Chase Sapphire Preferred.

And not just denied, really denied! No matter what I told them and how much I begged–nothing helped! I called them three times and gave them plenty of opportunities to come to their senses. 🙂

They didn’t budge. Here is what they told me.

That almost made me weep. What are you doing to me, Chase? I thought we were friends!

Chase has always been the easiest reconsideration bank for me. Not Citi, or Barclays, or US Air. The most I’d ever had to call them was three times. And in 9 cases out of 10, one time was a charm.

So, after I was told NYET for the third time, it was a time to think deep and hard. Do I throw my hands up in the air or do something I’ve never done–call for the fourth time? On Thursday night, my app-o-Rama looked like this, an embarrassing failure.

Then, Last Friday, I received the call from Bank of America that made me feel a little better.

The BoA Alaska card has a measly 25,000-mile bonus along with an annual fee, but if you apply for the right one, it offers a $100 credit statement that leaves you with a little profit. That wouldn’t normally be enough in my book to justify a credit pull, but this is the coveted Alaska Mileage Plan miles we are talking about. If you don’t know why they are coveted, check out this excellent article from Travel is Free.

So the thing with BoA cards is that you can churn them. And I mean really churn them–the old Citi AA-style. Still, since I’d already had three identical BoA cards by the time they called, I expected at least some questions. Like why, Mr. Shuman, do you feel the need for the fourth card with exactly the same benefits as the other three? I would’ve had a hard time answering that question. You see, I’d say, I needed the first card because I love that awesome Mileage Plan program. The second one to make sure that the first one is not lonely. The third card–to make sure the first two are not getting too cozy, and the fourth… Oh man, I would’ve said, just give me my points and let’s call it quits.

Fortunately, the CSR didn’t ask me any of those silly questions. He just verified my name, address, and the social, and approved me for the fourth Alaska Airlines card with a $20,000 credit line. Crazy!

On Sunday, I decided to call Chase for the fourth time and was told right away that they’d had the record of my previous conversations.

Gee, I thought, that can’t be good.

I had to change my story a little. After being approved for the BoA Alaska Air card, I had another $20,000 credit line. If anything, that made my chances with Chase even worse. Before he had a chance to explain to me why they can’t extend me any new credit, I said: “To tell you the truth, I don’t really need new credit. What I need is the benefits of the British Airways card. I was hoping he would ask why, and he did.

I made a speech about the beauty of the British Airways card and how great it is due to 1:1.25 earning ratio. “Isn’t it fantastic?” I asked almost bursting with excitement.

I also mentioned the annual fee waived for the first year and how rarely it happens. “I just have to get this card before December 31,” I said. “If you can only approve me for one card, please make it the British Airways card.”

I also added that I love all my Chase cards, but they can close some of my other cards in order to avoid overexposure if need to. He thanked me for the explanation and asked me for the permission to put me on hold, then came back and approved me by taking some balance from the Freedom card. Jumping ahead, the whole conversation took no less than 40 minutes.

What made the difference: my “witty” reasoning or HUCA?

If I had to guess, I’d say HUCA. I think what might’ve really helped, was getting on the phone someone who was not afraid to take action rather than err on the side of caution. I still didn’t get all the cards, but 5 out of 6–I can live with. Some part of me still wants to call and try getting the CSP too, but my other parts scream f**k, no! Those other, older, parts have been taking over lately.

What’s next for me and maybe you in this ever-changing environment?

I need my app-o-Ramas, since they are my major source of miles and points and thus free travel. I need to be able to get approved for at least 20 new credit cards every year. That means new accounts and new credit lines.

So far, I have been fortunate in that I didn’t have to use any tricks to get approved. None!

Gardening? What gardening? I guess, I’ve gotten too cocky for my own good. 🙂

My next stop will be reducing my credit lines and axing a few cards I can live without. As we can see, an extremely low utilization rate is not universally good. Do I really need four Alaska cards and three Citi Hilton’s? Maybe not. Strike that. Hell, no!

I will also avoid ordering more than one credit card from the same issuer. This is too bad because I can never find the time to go for that SWA Companion Pass; there are always some other Chase cards I want. Applying for a business and a personal card might still be fine, I guess.

[…] fourth call! All in all, got approved for 5 cards out of 6, but it's never been that difficult. Great Success Wife got denied for both Chase cards, as well, and I dread asking her to call — she hates […]

Also got just a $1k CL for the AA card. Ridiculous considering other cards I have with them have lines over $10k. They refused to move credit around between cards and refused an increase. So I was stuck with $1k. On top of that they sent the card almost 3 weeks into my 3 mo promo period to make it even more difficult. Meeting the $3k promo with that CL was a pain as they blocked me from going over the CL. It’s as if they purposely set the CL so low and sent the card so late that they… Read more »

Yeah, same here. No to both requests. I am also determined not to let them get away with this. 🙂

I called in re: the AA Biz card for which I had received 2 invitations in the mail. I was told that I couldn’t get the card because it’s for first time cardholders & I’d had the card 3 times in the past. I thought after 18 months you could get it again. What a waste of time and a pull.

I would try to get reconsideration. In my case, I’ve had AA Biz cards multiple times, and the last one less than a year ago

I called recon again. I was told that I cannot be approved because I’ve had the card 3 times before and canceled each time. Last closure was in May, 2013. She told me I could apply for a different product such as a Citi card with Thank You points. I asked if she could approve me, and she told me that would require another application – she cannot change the product. At least I got another Chase SP, Barclays US & BoA Alaska. Guess there’s nothing else to do today.

JA, that’s unfortunate. Hopefully, they were just two employees who “love their job too much”, and you will be able to apply in the future, say after full 2 years have passed.