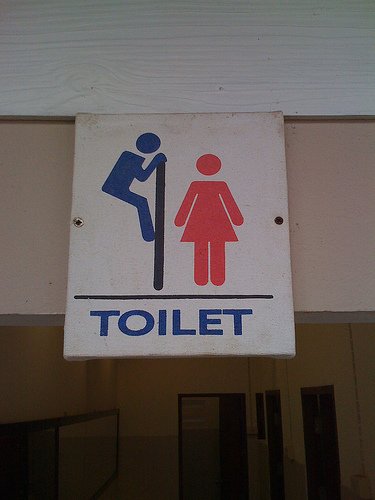 Toilet humor, anyone? No, not today.

Since my last week Late Saturday Night “column” has been well-received (meaning getting a few clicks above the usual two or three), I’ve decided to try and reproduce that success by turning it into another scheduled feature (just like my other scheduled features I can never keep up with). I’ve searched the net for you so you don’t have to, in an attempt to bring you some funny, travel-related jokes, like this one, by Britney Spears, for example. Tell me it ain’t grand! Wait! What do you mean she wasn’t kidding? Really? I’ll be damned!

The cool thing about being famous is traveling. I have always wanted to travel across seas, like to Canada and stuff.

Flight attendants understandably have never-ending supply of jokes at the expense of their passengers. Like this one.

It would be really funny if travel agents didn’t have funny stories of their own. In the end, who are on the frontline dealing with clueless clients?

I got a call from a woman who wanted to go to Capetown. I started to explain the length of the flight and the passport information when she interrupted me with “I’m not trying to make you look stupid, but Capetown is in Massachusetts. “Without trying to make her look like the stupid one, I calmly explained, “Capecod is in Massachusetts, Capetown is in Africa.” Her response … click.

Turbulence might be quite scary, but don’t let the fear of flying get to you as it got to Dennis Miller.

My fear of flying starts as soon as I buckle myself in and then the guy up front mumbles a few unintelligible words. Then before I know it, I’m thrust into the back of my seat by acceleration that seems way too fast and the rest of the trip is an endless nightmare of turbulence, of near misses. And then the cabbie drops me off at the airport.

UPS pilots have their share of jokes, too. They are immensely and rightfully proud of being the only major US airlines that has never had an accident. That’s in addition to being one of the very few major airlines that have never carried people.

After every flight, UPS pilots fill out a form, called a ‘gripe sheet,’ which tells mechanics about problems with the aircraft. The mechanics correct the problems, document their repairs on the form, and then pilots review the gripe sheets before the next flight. Never let it be said that ground crews lack a sense of humor.Here are some actual maintenance complaints submitted by UPS pilots (Marked with a P) and the solutions recorded (marked with an S) by Maintenance engineers.

P: Something loose in cockpit.S: Something tightened in cockpitP: Dead bugs on windshield.S: Live bugs on back-order.

Does some of the stuff above sound made up? That’s because it very well may be. But remember what Nucky Thompson from Boardwalk Empire once said:

Never let the truth stand in the way of a good story.

Although, he wasn’t the first who said that. And neither was Hemingway. And neither were Mark Twain or Frank Dobie. The first person who said that was Delbert Trew, and this is the absolute truth because I found it on the internet.