In my Nov 29th post I told you about incredible award JetBlue Cuba travel bargains.

Some bargains are gone, but others are still there. Probably not for long, so your flight sooner rather than later.

The cheapest award trip between New York and Havana I’ve found is now 11,000 points and $72 in taxes and fees.

The same flight costs $260 all taxes included. If you deduct taxes, you get 1.7 cent per TrueBlue point — not worth it IMHO.

At this points ratio, cash is better.

Orlando to Havana for 200 points is gone, but the new level is still a good value

That was an incredible bargain for the JetBlue Cuba Travel, but it’s gone, too. The cheapest flight from Orlando I found in February-March is 3,200 points and $72 in taxes.  The corresponding revenue ticket costs $154, so it’s still a good redemption at 2.25 cents per point.

And so is Fort Lauderdale to Havana

The cheapest dates I found show 2,100 points and $72 per round trip. While it’s not as good as before, you still get a solid 2.8 cents per point return on your award ticket.

JetBlue Cuba Travel awards from FLL to Santa Clara, Camagüey, and Holguin are still a bargain!

You can still get a phenomenal deal if you don’t mind flying to smaller Cuban cities. You can fly there for 200 to 600 points per round trip and still get up to 18 cents per point.

Get 18 cents per TrueBlue point after deducting taxes.

Are any of these cities worth flying to?

Certainly! Santa Clara is the nearest airport to the resorts of Cayo Santa Maria, which are immensely popular for their immaculate white-sand beaches. In addition, it’s less than a 5-hour bus ride to Havana.

Holguín is known for spectacular beaches too, but also for hiking and eco-tourism opportunities. The area has mountains, valleys, and a few National Parks. The Parque Nacional Monumento Bariay was opened in 1992, and commemorates  the 500th anniversary of Christopher Columbus’ landing.

Camagüey’s historic center is a UNESCO World Heritage site. It’s quirky and colorful, with colonial architecture, cobblestone streets and gorgeous plazas. Its central location makes it easy to enjoy the famous Santa Lucia beach in the north of the island and the largest in the Caribbean marine park Jardines de la Reina in the South.

You can, of course, fly into one city and fly out of another. Take this opportunity to truly explore this unique and incredible country and save money on the airfare.

So, what’s up with the new taxes?

Let’s play a game. This is the screenshot from my Nov 28th post.

Can you find a difference?

Same airports, same amount of points, same everything, except …

For some reason, in the last 10 days or so, all JetBlue award flights to Cuba have gotten $25 more expensive.

Good question. I’ve sent an inquiry to some contacts from JetBlue and will see what they’re going to say about it, but in the meantime, let’s do something we like more than anything — speculate.

Dissection of taxes and fees

Local authorities in touristy destinations often make concessions or revenue guarantees to airlines. That’s nothing new. The size of that guarantee depends on how desperate they are in attracting visitors and incentivizing the airline to keep or start flying. Has Cuba withdrawn that guarantee (if there has ever been one) or has our new president tweeted something that’s made airline executives nervous? Like a threat to terminate Obama’s normalization deal?

If it sounds too far-fetched, maybe it is, but, for some reason, American Airlines is preparing to cut a quarter of its flights to Cuba in 2017.  Just 2 months ago, all airlines offering flights to Cuba were full of joy. There has to be a reason for this suddden change of heart, whatever it is.

But back to taxes. The only difference between November 28 and now that I can find is the $25 “Cuban Health Insurance Coverage.” Here is a screenshot of your taxes and fees on a New York to Havana revenue flight to Cuba. 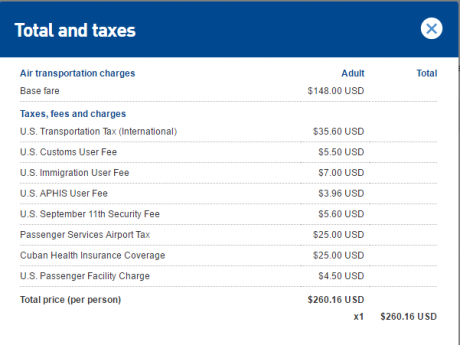 The “Cuban Health Insurance Coverage” is the only item that stands out.

And this is your itemized tax bill for the New York to Havana award ticket.

Same charge on an award ticket.

Let’s compare to the taxes that you would’ve paid for the same flight 12 days ago. Sorry, no itemized screenshots, since there was no reason for me to take them back then.

New York to Havana revenue ticket taxes and fees if booked less than 2 weeks ago:

And an award ticket was cheaper too.

I believe that JetBlue is now passing the Cuban Health Insurance Coverage on to the customers, which, for some reason, it didn’t until very recently.

The coverage is mandatory for all non-residents to enter Cuba, so it’s not a bogus charge. JetBlue might have had some kind of agreement with Cuban officials or it might’ve absorbed the cost to make travel to Cuba more attractive. Whatever the reason, you are going to pay $25 more now, whether you book for cash or points.

The bottom line is: if you’re interested in visiting, consider booking now, because who knows what comes next. Just a year ago, a ticket to Cuba cost around $800 or more. Are we going back to the dark ages?

JetBlue credit cards can get you 60,000 points

These two credit cards offer a fantastic way to accumulate 30,000 TrueBlue points after spending $1,000 in the first 3 months, and each of them is definitely worth the $99 annual fee. Please consider supporting this blog — I will receive a small commission if you apply for the personal card by clicking on the link below. Remember, that you can (and probably should) also apply for a business card even if you don’t have an official business.

Filed Under: Miles and Points
← ANA Frequent Flyer Program: the Best or Not the Best: Part 7 — Summing Up
Delta Fuel Surcharge Has Been Added to a Flight to the Caribbean →
0 0 votes
Article Rating
Subscribe
Login